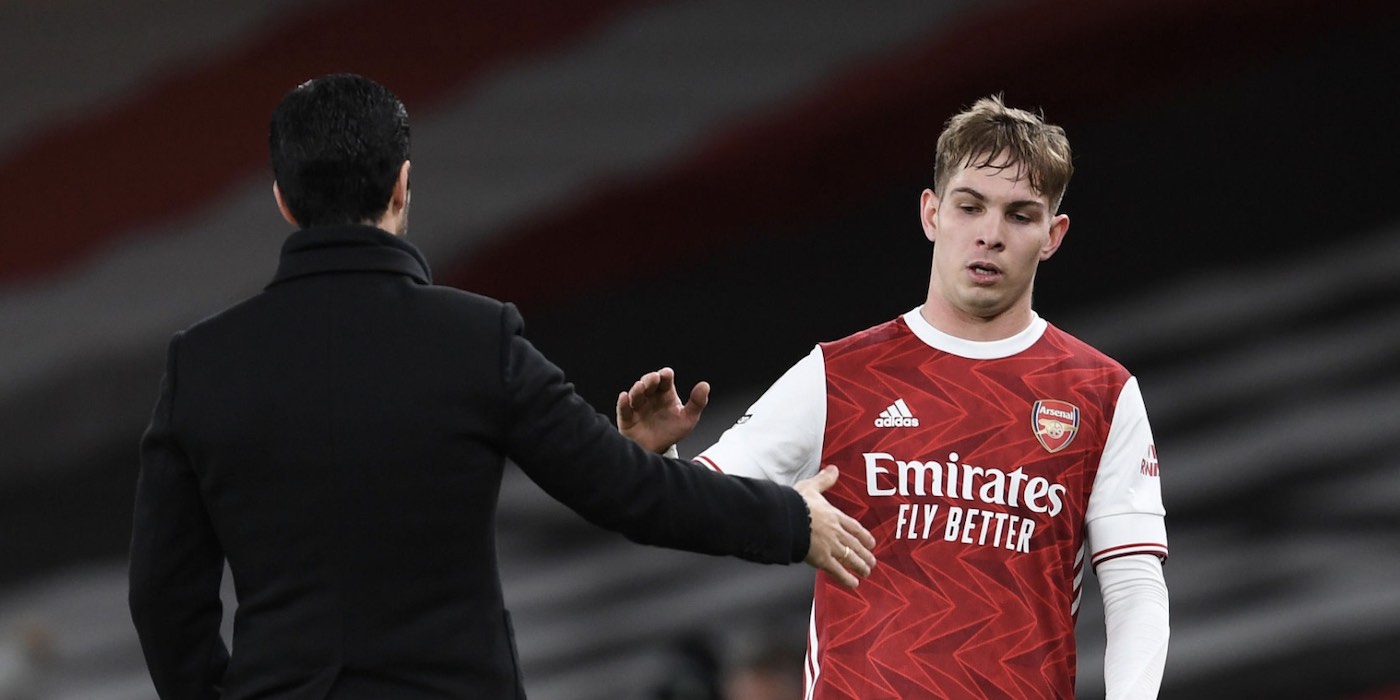 Mikel Arteta says Emile Smith Rowe can follow Bukayo Saka’s lead and earn himself a place in the England team.

Three Lions boss Gareth Southgate told TalkSPORT this week that he’d been monitoring the Arsenal duo in recent months and labelled them “a breath of fresh air”.

While Saka was fast-tracked to the England senior side, injuries have hampered Smith Rowe’s development and he’s yet to progress past under-20 level. That could change later this month. The Croydon-born midfielder is tipped for a call-up to Aidy Bothroyd’s under-21s and Arteta thinks the level up isn’t out the question either.

“I think it is possible,” said the boss when asked if Smith Rowe could get a call from Southgate next week.

“If he shows the same determination as Bukayo, be as humble as he is and play with the personality that he’s done, I think he’s got a great chance.

“Emile has got all the attributes, all the qualities that are needed to play for this football club and, in my opinion, to play for the national team.

“After that it is about finding the consistent level that is required, because obviously that level is as good as it gets. But I think he has shown in moments of this season what he can do.

“So it is about now doing it for longer periods, adding more assists, more goals, being a threat all the time and working as hard as he has been doing because I think he has been phenomenal for us.”

Smith Rowe has made 20 appearances for the Gunners this season, scoring two goals and making six assists. He’s not expected to be involved at Burnley tomorrow having picked up a muscle problem last weekend at Leicester.

I was impressed and even a bit surprised at how good he has been. He’s only young so will get better still…

I don’t see why not. He’s a skilful young player with excellent prospects. The experience with Saka and ESR (and a few others at various stages of development) should encourage the club to prioritise young players (even) more. It’s the way to go.

Such a shame that he’s in (roughly) the same role as Grealish/Maddison – and others. If not, I believe he’d already have been called up.

Of course I as an Englishman do want to see them in the team, but also definitely won’t hate the extra rest that they will hopefully get from not being the only good options for the national team, as would have been the case just a few years ago.

I know it isn’t great to compare young players to old, but his feet are so quick, that he reminds me of Santi, which can only be a good thing. I am loving the Hale End talent.

To be honest, I really think only injuries can stop him from becoming an established England international over the next seasons, maybe even earlier.
Has got it all and I think in the current set up with a good mix of other homegrowns and senior players around and Mik as Manager, he’s destined to shine.

It’s crazy how much England’s AM options have improved in just under 3 years. We went to the world cup with Alli and Lingard starting at CM, now we have Grealish, Mount, Maddison, Foden, Jones and of course our very own ESR. Lots of competition for places now, but that should only drive him to get even better.

I think ESR is a fantastic player, you could see the potential a few seasons ago when he shone in pre season and Europa, keep up the good work