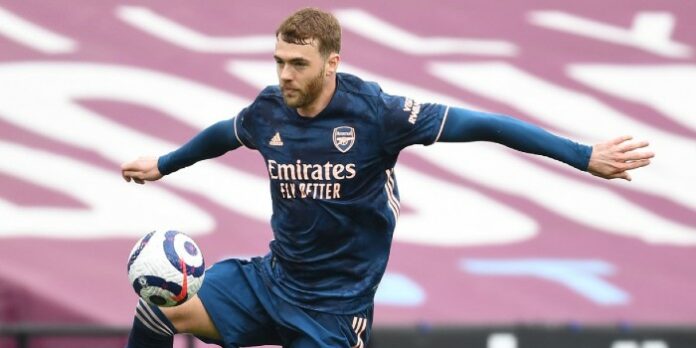 Calum Chambers says Arsenal were disappointed to leave the London Stadium without a win despite falling three goals behind to West Ham.

The Gunners looked dead and buried when Tomas Soucek scored his side’s third goal on 32 minutes only for the Czech international to inadvertently spark a comeback when he deflected Alex Lacazette’s effort past Lukasz Fabianski six minutes later.

In the second half, Arsenal, spurred by impressive performances by Chambers and Martin Odegaard, completed the comeback as Craig Dawson put through his own net and Alex Lacazette headed a late leveller after Michail Antonio had hit the post.

It was a roller-coaster afternoon, one that summed up the worst and best of Mikel Arteta’s side.

“We weren’t at it,” reflected Chambers. “We were slow, we were sloppy, we weren’t picking up players. The first-half was poor and that can’t happen at a club like Arsenal. We know that.

“We have all come in a bit disappointed we haven’t [won]. So that just shows the level we can be at and the level we need to be at. We killed ourselves in the first-half by conceding three goals.

“I believe the pressure we put them under in the second half, and with the chances we created, we could have scored another one or two maybe.

“However, if you concede three goals in the Premier League, you don’t deserve to win. So, it is one of those. That can’t happen and it needs to be the second-half [performance] for the whole game.”

Thomas Partey was similarly frustrated at the Gunners failure to get to grips with the tempo of the game from the off. The Ghanaian was one of a number of Arsenal players caught out for the second goal as Jesse Lindgard set up Jarod Bowen while the visitors turned their backs on his quick free-kick.

“I think they came out very strong. They overloaded us on the outside and they are strong with crossing. We allowed them too much time with the crossing and that hurt us a lot. Second half, we made sure we blocked all the crosses. From there we started to dominate.

“We stuck to our plan. We know how to hurt them, we went all-out and everybody was fighting as a team. I think the spirit was high after we conceded three goals. From there, we started to give our all. But we have to start as we ended, in both halves.

While the Gunners climbed to ninth in the table, the two dropped points certainly damage our chances of qualifying for Europe via the league.

When the players return from the Interlull, we face Liverpool at the Emirates. The Reds are currently four points above us in the table.

I’m a big Chambers fan. Got the timeline a bit mixed up, but I believe he looked as our best CB in the pre-season prior to being loaned out to Fulham, only to become player of the year for them. Had a string of great games under early-Arteta but unfortunately got injured. I’d understand if we sell him in the summer but interested to see if he gets another chance at CB under Arteta again – he’s great on the ball as well as in the air – I mean I can’t imagine our other CBs whipping in crosses like… Read more »

A M
Reply to  yen

remember he played cdm for fulham and was praised there, so maybe he could be a potential midfield option

Anders Limpar
Reply to  A M

I’d start him in the middle over Xhaka any day!

Cranky Colin
Reply to  A M

There have been opportunities to put him at DM, like v Olympiacos, and therefore see him in action and rest others but while I like MA, he ain’t gonna do it cause he doesn’t think that way.
Anyone like the volleyed flick into Laca……..I did!
He’s not a one trick pony the way I see him………

Perhaps a little like finding balance on the wings with one explosive winger and another more ball playing wide man, we could use a similar balance at full back positions.

I still don’t know what Chambers is. But yesterday was a massive positive in an Arsenal career shrouded in frustration.

He was generally considered a full back when he first broke through, and I think even got an England call up at the time. The roasting he received though in the Swansea game pretty much destroyed his reputation as a full back, and he has not really played there ever since. Judging on yesterday’s performance, he might have been harshly judged and deserves another chance.

Murphy was an Arsenal Fan
Reply to  yen

He willl likely not be sold. Is a decent back-up RB, is a very decent CB, is a fairly decent back up low-lying Midfielder. This may seem contrary to say, but if Chambers had been fit, AMN was never going to get the chance he did in the run up to the FA Cup, and would most likely have been a Wolves player. Wonder who’d have slotted in at LWB, but that’s another matter.

I’d rather us sell Bellerin, who has big teams with big money sniffing around him and it has been reported we’ve agreed to let him go. He’d fetch a handy sum, and unfortunately Hector really hasn’t kicked on. He’s been solid, but that’s about it. Cedric and now Chambers have both put in better performances than the best we’ve seen from Heccy. I love the guy, but I think it’s time to cash in and reinvest.

Id’ agree with this. I’ll be sorry to see Hector go, but maybe it’s time for a change – for him and us. I’d be inclined to keep hold of Chambers also based on his home-grown status and versatility. I’d also be kind interested to see what he could do in CDM alongside Partay. Potentially he could play a similar role to Xhaka, dropping into the defence as the fullbacks push on. Xhaka could be another allowed to move and raise some funds. I’m not sure if he has the passing range required, maybe somebody who watched him more closely… Read more »

nah. we can do better than chambers mate.

You can’t disagree with anything that these players have said but my problem (or rather the team’s problem) is that we’ve had player after player coming out with this kind of talk after similar performances but that’s all is – talk (or appears to be) as we still keep making silly errors, “switching off” for vital parts of games, whatever. Of course, it’s good to see that many of our players recognise there’s a problem but it would surely be much better if they (in concert with MA and the coaching staff) actually did something about eliminating it. You never… Read more »

If players keep switching off and getting away, then it all comes down to the manager. They don’t fear him and have lack respect for his tactics. None of our players would get away with any of this switching off if they were at man city. Our team has been known for being too soft and too nice, now we have a soft manager, and captain who is a nice guy but not captain material. We need discipline!

I don’t get an idea of what MA is like in that respect. We all knew about Sir Alex, for example, and how he “persuaded” his players to do what he wanted. That’s not the only way, of course, and there are other approaches but at times you do need to lay down the law – the managerial equivalent of “my way or the highway”. However, the player comments post-West Ham have revealed that there was a game plan in place – which presumably they all knew about/understood – but that they didn’t follow for parts of the game at… Read more »

Playing Chambers at RB and they way he passes; he can potentially play RCB next season..

When I saw the line up yesterday I was not sure Chambers was up to it. I felt he needed more minutes from the bench before we could give him his full game. I have to say going forward and putting in a shift he was amazing and proved me wrong. Our defense is total shambles, so hard to judge him there, but he did make some good blocks. I just hope he shows this level of hunger every time he plays and stays fit.

I get all the talk about the shambolic 32 minutes of the first half. But no matter how good a team is, it can happen. More so to a team playing its fourth match in 11 days, including a flight to Greece and back, and a draining NLD to boot. The encouraging thing for me is the fight back! Two seasons ago – even last season – that would be game over after the third goal. But I see a team with mental steel emerging. There will be hiccups here and there, but we are well on our way. Two… Read more »

Given the consistently inconsistent performances of the team, Arteta should seriously consider making use of the services of a number of psychiatrists to address and deal with the players’ mental health issues once and for all.

Or borrow “the hairdryer” from the Man Utd museum?

I think it’s an accumulation of bad experiences and we still have a few flaky players left. Leno, Luiz and Granit are the major culprits, once the goalie gets nervous it infects the defense and it spreads from there, Luiz should be gone in the summer, his long passes and supposed leadership just don’t make up for his faults, and Granit seems to be better with Partey alongside him. It will be interesting to see what happens in the summer but I think we’ll still have Granit and Leno, hopefully a steadier team around them will help.

Leno? Your literally talking about one dodgy pass to Ceballos as justification to throw him under the bus. What else had the man done? Please!

I also don’t get this, he’s been one of the top 3 players every season since he became our no. 1 and yet people put him in the same bracket as xhaka and luiz

We might be in need of a stronger captain. Hate to sound like a clueless pundit but sounds like we are missing a general on the pitch – someone that ensures no one is slacking.