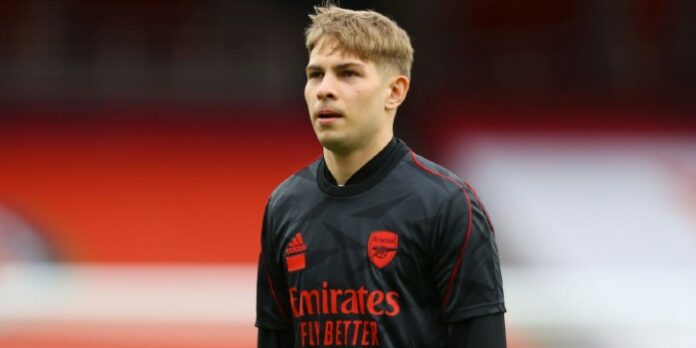 The U21 Euros get underway today and from an Arsenal perspective there are three players to keep an eye on at the tournament.

Matteo Guendouzi, on loan at Hertha Berlin, is the captain of the France side who will take on Denmark, Russia and Iceland in the group stages.

Eddie Nketiah and Emile Smith Rowe, meanwhile, have both been named in the England squad, although Joe Willock and Reiss Nelson weren’t called up.

Nketiah is England’s all-time record goalscorer at U21 level having scored 16 goals in 14 appearances.

The striker may have been on the periphery of proceedings at Arsenal in recent months, but he could have a prominent part to play for England, who take on Switzerland, Portugal and Croatia.

Smith Rowe received his first callup to the U21s following his impressive displays for Arsenal. The midfielder is no stranger to the international scene, however, having won the U17 World Cup in 2017.

Due to changes caused by the pandemic, the group stages of the tournament will take place this month, with the knockout stages to be played in the summer.

Arsenal will hope that all three of their players can impress, although there will certainly be some concern regarding whether Smith Rowe in particular is able to avoid getting injured.

Shows that Guendouzi can’t be that bad, young and France captain, I wasn’t expecting that.

Good luck to Eddie, hope he can step up, extend his record and challenge for an Arsenal place more. And ESR, hope he doesn’t play too much and gets worn out.

Well, Guendouzi hasn’t impressed his loan club, Hertha Berlin, who announced, according to reports in Germany, that they don’t require his services on a permanent basis describing him as conspicuous for his theatrical appearances which haven’t, apparently, impressed them.

Yet, he keeps playing game in game out… Guy is a young and has time turn his attitude around. Not many teams around that have young players with the potential of Saka, Martinelli, Emile and yes, Gendouzi.

I imagine the reason why he’s playing is that Hertha Berlin are paying him (whether he plays or not). They are close to the relegation zone so can’t afford to have a relatively expensive player sitting it out on the bench.

Surely relegation will cost them more than playing someone based on his salary than on merit?

He is not though. Hasn’t played since a good amount of time

B JACK
Reply to  Biggles

Johnny 4 Hats
Reply to  B JACK

Much Matteo about Nothing?

The Phantom of the Stropra?

A Mat on a Hot Tin Roof?

Good luck to them, let’s hope that they take their chance and really impress in the U21s. They could both have a bright international future at the top level in front of them.

Feel sorry for Nelson, he is certainly better than Cantwell who has been called up to replace greenwood. Willock is unlucky to miss out too.

Maitland-Niles must be kicking himself too cos that switch to prove he is a midfielder for a relegation doomed side has seen his slim euros chance gone and with it possibly his Arsenal future.

Lets be fair, england is stacked in fullback positions anyways, I don’t think he could have made the full team for the upcoming euros

Eddie is made England captain with glowing comments from the coach. We tend to see a moody player (remember his annoyance when a team mate scored instead of him?) who doesn’t seem to fit our style. Yet his record scoring is testimony to his ability.

In Guendouzi we also see a moody player who seems unable to fit in? Runs a lot but not always productively.

Ì’d love to see both of them perform well and become Arsenal legends but have doubts.