Arseblog News – the Arsenal news site
Home Matches and team news Europa League “This is just the start” – Partey promising to get back to...
Facebook
Twitter
WhatsApp
ReddIt 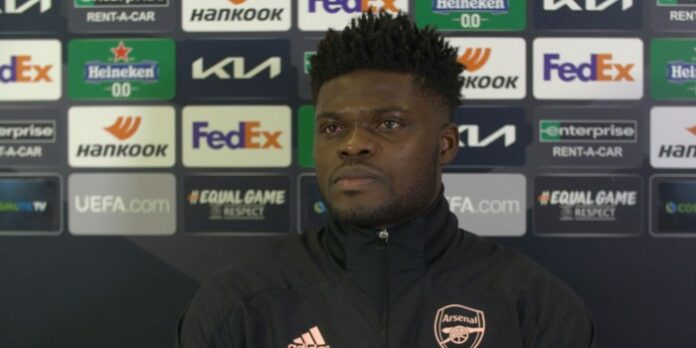 Thomas Partey admits injuries have complicated his start to life at Arsenal but he’s determined to ensure “everything will be good”.

The Gunners took many by surprise when they spent big-money to secure the Ghana international at the height of the pandemic.

While the player has shown flashes of his ability, he says it’ll take a little longer to fully adapt to the Premier League and his teammates.

“It was a difficult moment to get used to how the team plays and I think the injuries are part of the adaptation,” he said ahead of Arsenal’s Europa League clash with Olympiacos.

“I think people have their own opinion, but it depends on me and how I adapt to the situation that I’m in. It is part of the game, you never know when you’ll get injured. I do all my work, I try to make sure I’m fit to play any game.

He added: “When you look at how I play, I like to create spaces for my mates, I like to take the ball with me and then go to the attacking phase. It’s something they’ve seen in me that they’ve brought me here to do more. When I’ll be on my feet and 100 per cent, I’ll be able to give more which is very important for the strikers and for all the attackers to enjoy.

“I had a few games, against Man United and against Wolves [where I was 100 per cent], and I was able to show what I can do. Due to less games and less training, I have to keep working and have to keep trying to get back to that level of performance.

“I think this is just the start. I’m starting to get used to how my mates play, how the Premier League goes and with time everything will be good. I will do my best and will do my work to try to make sure I will be at my best.”

Partey was also asked what it’s like playing alongside Granit Xhaka. The Switzerland international appears to be Mikel Arteta’s preferred partner despite his proclivity for high-profile gaffes like the one that stained the Gunners’ 1-1 draw with Burnley at the weekend.

“I think he’s a great player,” said Partey. “We all know he works hard for the club and for his mates on the pitch. As we all know, in football, you never know when you’re going to have a bad day and it’s part of it.

“We have to keep fighting for each other and that’s how we’re going to be able to have a good game and win matches. All the players know what we have to do when we play together. It doesn’t matter who we play with, we have to do our best and win games.”

We’ve needed Thomas ever since we lost Vieira and similar physical and skilful midfielders.

Look forard to him playing as much as possible.

Most footballers are in extremely good physical condition, but I have to say, there is something slightly different about his body shape that looks super athletic and imposing even among other top athletes. Can’t wait until he’s at 100%.

We have had too many of Cazorla, Fabregas, Xhaka, Ceballos, Torreira, Flamini, some being great players but none being the beasts that take control of a match due to their size and physical presence. When we had Gilberto, Vieira, Petit, Diaby (until he had his leg bust) we controlled the midfield much better. Partey fits better into the same category of midfielder.

I mean chuck a Santi or Cesc our way at the moment and I wouldn’t complain!

One of those and Partey, fantastic.

My concern for a new Santi is that they would have the same problem as our Santi, the physicality of the PL leading to injuries.

It was nice to hear Declan Rice, after the West Ham Leeds game, name checking big Patrick as a player he is working hard to base his play and style on.

Hopefully, he’s put his injury problems behind him as he’s obviously a very influential player for us. We’ll probably see him consistently at his best next season when he’s fully settled in.

It’s the kind of Partey where you arrive at 8 o’clock but no one’s there yet so you have to make small talk with an electrician from Telford while eating lukewarm vol au vents and drinking flat Cava. And you keep checking the door in the hope that someone turns up with a gram of speed and some d’n’b.

And WADA don’t investigate us…

Thank you for this. I loved it.

The art of arriving at a party at just the right time is a genuine skill.

Last season Partey had the highest dribble success rate in Europe, he also had the most mistakes leading to clear cut chances He’s a player who’ll get on the ball and try and beat the press, but when we take risks in deep areas, there’s always a chance things can go wrong He’s another player I think we’ll have to accept will make mistakes, and in the areas of the pitch he takes chances, those mistakes will be more evident His ability to take the ball in tight areas and find a way out, will help us create overloads in… Read more »

“I think he’s a shit player,” said Partey. “We all know he works hard for the club and for his mates on the pitch but he keeps fucking up every third game and from talking to the boys it seems he’s been doing this exact thing for like 5 years. What a wanker. As we all know, in football, you never know when you’re going to have a bad day but he’s an absolute nightmare to play alongside and I can’t wait till he’s sold.”

Reading between the lines

“I had a few games, against Man United and against Wolves [where I was 100 per cent], and I was able to show what I can do. Then suddenly I realised the Arsenal medics did not know what they were doing. All the medical advice was wrong and they tried to stop me playing. I’ve never known such a bunch of incompetent fuck-wits”

He gets a free pass this year because of moving to a new country/league and the injuries. Hopefully, we see the best out of him next year as he builds more ‘automatisms’ with his new teammates.

In fact, the Partey hasn’t even started yet. It’s just been slightly delayed by a bit. Like the time I went to a Guns N Roses gig and Axel Rose turned up four hours late and you think he’s a d*ck, but ends up smashing the gig so you love him in the end. Pretty similar, right?

Not talking to you. You go to Guns’n’Roses gigs!

I’m a big fan of what I’ve seen so far. He just oozes class on the ball and all of his movements look so smooth. Pity his injuries have caused his first season to stutter, but no doubt this guy will be huge for us. I only wish we’d bought him sooner.

He needs to take more initiative in the midfield

Yes, but it takes time to settle into the team, and he’s missed a lot of games through injuries. He has shown that he can become very influential player in my opinion, we just need to give him time.

Mental strength and leadership is a real concern for this team. Sorry but if your emotional and tactical leader is David Luiz, then you are in trouble. Just give the armband to Tierney and get rid of players like Bellerin and Xhaka

Agree on everything you said except on Hector. He’s class.