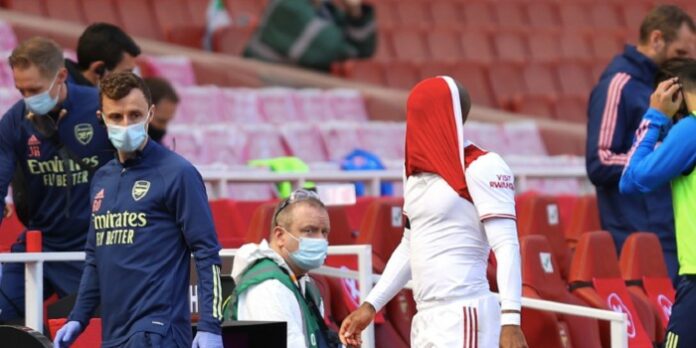 Mikel Arteta has defended his decision to rotate his squad after Arsenal could only secure a 1-1 draw with Fulham.

Keen to rest tired legs, the Spaniard made five changes from the lineup that started against Slavia Prague on Thursday and still saw a key player pick up a potential long-term injury, as well as a disjointed performance.

Alex Lacazette appeared to pull his hamstring with 20 minutes remaining and even though his replacement, Eddie Nketiah, went on to grab a stoppage-time equaliser, the boss was clearly frustrated.

“There are different reasons for that,” he said when asked why he made so many changes.

“One of them is because some of the players haven’t recovered yet from Thursday night, they have played so many minutes and it was a big risk to play them.

“Some of them because they deserved an opportunity, but we cannot change 10 players all the time.

As things stand, it’s too early to know how long Arsenal will have to go without Lacazette. It’s certainly a concern given the Gunners are also without Pierre-Emerick Aubameyang who is recovering from malaria.

“We’ll have to see,” said Arteta when quizzed on the Frenchman’s injury. “We’ll have the scan, probably on Tuesday, to see the extent of the injury and the timeline for it. But I don’t know.

“I cannot tell if it’s going to be a week, two weeks, five weeks or six weeks.

“He felt something in his hamstring and we don’t know the extent of it. We are all disappointed because we all know the moment that Laca was on.”

If Arteta’s star pair isn’t fit, then Nketiah will be waiting in the wings. The boss was pleased that the England under-21 international, who has been rarely used since the turn of the year, made an instant impact with his poacher’s strike.

“He always offers his best and today he scored a goal and he had another two important chances,” said Arteta. “He’s always a threat in front of goal.”

He added: “Obviously every player needs minutes and Eddie’s been fighting all the time to get more minutes than what he was getting this season.

“It’s good that when he has opportunities to show his attitude and his quality, that he’s done it.”

Yeah, if you play your 29-year old striker who’s been playing pretty much every game in a pointless dead-rubber affair, people are totally going to ask why he’s not playing.

And if you play your 24-year old record signing who’s just had a great game, people are going to ask why he’s playing.

These are things that would happen and are completely equivalent.

I think he is right in speaking his observations because he interacts and sees players everyday. I wouldn’t raise questions on grounds of fitness of players.

well said. it amazes me how so many on here seem to be experts in predicting sports injuries.

Nketiah is not it. Arteta needs to start Martinelli through the middle. Pepe on the LW and Saka RW ESR CAM

Hopefully Aubameyang and Odegaard will be back in time for Villareal.

Nketia not good enough to play for the Arsenal. Wish the kid well but give martinelli or balogun a shot down the middle.

martinelli works well from the left. he also does a good job defensively there. let’s keep him there and give him a bit of stability. i’d prefer to see pepe given a run in the middle if laca/auba are not available. he can hold it up. he is good in the air. he can finish. he can run in behind. he can hold it up and play people in too. if it works out, he could be the answer for next season if we want to cash in on laca and auba. gabi/pepe/saka with esr behind sounds pretty exciting to… Read more »

I’d have kept Mari in the team. He and Holding are our best combination.

And Elneny holds us back.

Did you even understand what Arteta spoke about need of changing certain players? Mari didn’t start because he wasn’t 100% ready to do full 90.

Mari is a centre back and forgive me if I’m wrong here ? But central defenders have it relatively easy compared to the fullbacks and midfielders who endure far more intense physical efforts ! Just a thought ?
#SupposedToBeHardLeaders

On the right path?
Reply to  RockyRog58

you are wrong, and begrudgingly forgiven

for mari.. if you remember we play him 6 games in row before.. and what happen after that… he was injured for 3 weeks.. i understand why arteta prefer to save mari

as for elneny.. he actually do nothing wrong but he wasnt flashy either..

“Resting players because they played a lot of minutes” – Plays Saka still. The player with the most minutes this season. I did not have a huge problem with Laca, but if you talk about rotation and don’t rest Saka whilst having the likes of Nelson souring on the bench is very difficult to understand.

Samgunz
Reply to  Viv the 🐐

Yet i heard he was the best player, sooo arguably right to start him.

Dave
Reply to  Viv the 🐐

Arteta must leave and silent Stan must invest.

Goonerink
Reply to  He’s got no hair but we don’t care...

Clearly you haven’t read what Stan been up to….

TeddyT
Reply to  He’s got no hair but we don’t care...

We have spent more than most clubs around the world if you actually just look at the numbers instead of complain about it. Quit making up reasons fo hate.

On the right path?

The logic for the rotation was reasonable and the players rotated was reasonable enough. We needed to see better from ceballos and elneny… it couldn’t have been any clearer today that they are not the level we need. Occasionally each can produce the level needed but too often they simply can’t.

He can’t win, there are going to be injuries whatever he does, playing Elneny drops the level of the midfield but what if he’d played Partey and he got injured? This season has been an absolute bitch and when it’s over then half the squad will be off to the Euros and Copa America, then the African players will be playing AFCON after Christmas so it’s never ending pressure. Unless we join the Super League, in which case we’ll have to tear up the contracts of our international players because they won’t be sticking around and we’ll have to buy… Read more »

I’m pretty sure that Nketiah (who is pretty much certain to leave at the end of the season) is going to get this chance over the next few weeks instead of Martinelli or Balogun (both of whom who’ve signed long term deals). I personally think that we need to be more ruthless and it’s something that has cost us over the last 10 years. Playing Nketiah may make us feel that we’re good guys because he deserves his chance, but to be cold hearted, if we’ve decided that he’s not deserving of a new deal and that two other young… Read more »

Could Not agree more.
Market value is The only point tbh, and that is Not enough compared to The upside of playing Martinelli or Balogun there.

Balogun signs a contract and he is appeased with a couple of minutes, but doesn’t get selected for the bench the following match, very sad because he showed glimpses of quality, albeit a few.. Arteta is sleazy and that is why he cannot keep this players motivated. His treatment of players is simply atrocious. Pepe and Martinelli are prime examples. Every time Pepe gets some momentum Arteta cuts him of at the knees. The team has two wins on the trot and he banishes Pepe to the bench. I am sorry but his excuses don’t make sense because its okay… Read more »

It’s possible Lacazette has played his last game in an Arsenal shirt.
What a shame that would be, hobbling off the Emirates on your last day.

Why won’t Laca get injured when his team is loaded with mediocre midfield and error prone defense. He was simply programmed to overwork himself to get result by all means. Arteta by his reckless rotation plan inadvertently designed Laca’s injury period. Laca would have had less work to do with an efficient midfield.

I respect Scott Parker but his whinge over the equalizer really wound me up.How long has the not interfering with play been about in the premier league.The goal rightly stood and no mention of the dubious penalty decision his team got.

Every time an Arsenal player scores they should go to the camera and yell “GET A LIFE STAN KROENKE”!

Arteta is merelyadvertising that he plans to sell his shiny new Eddie this summer.

As I mentioned some time back, the league is a wash. Performances are frankly moot. We don’t look practically any more improved than we were in December. Still frankly in mid table. I don’t think even Arteta is motivated to push his team beyond using remaining games as a gauge on who to keep. and even at that, he and Edu likely to repeat mistakes in summer window. The only potential silver lining is IF we can get past Villareal (Good Ebening) and win the europa. Otherwise, impact to summer will be great. Many deluded people think we are going… Read more »

I don’t understand the idea that this was a dead rubber. The way spuds are playing, and Everton. And villa’s run in meant there was a really great chance for us to snatch 7th and most likely make Europa again. (Obviously that conversation has changed now). But that means beating the lower teams. Starting with Fulham.

Agree 100%. Regardless of Europa would be nice to finish above Spurs.