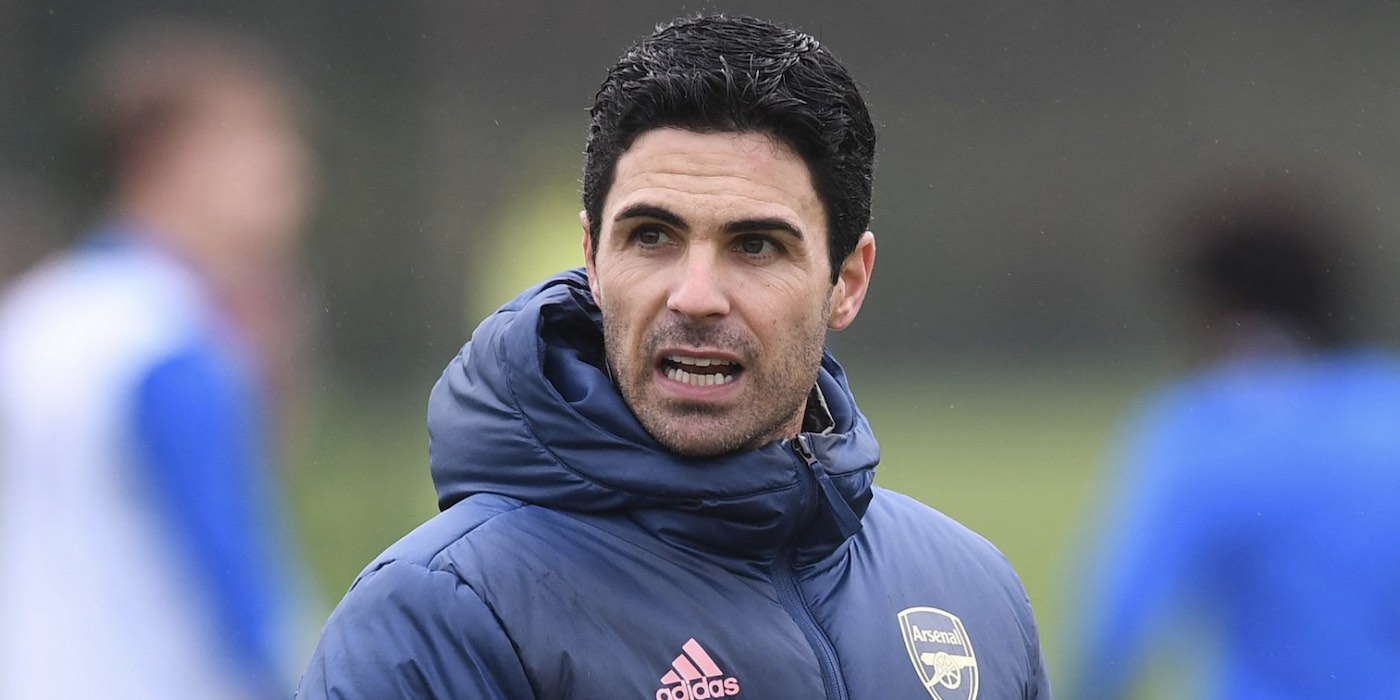 Mikel Arteta believes last night’s impressive 4-0 hammering of Slavia Prague is proof that his players can perform under pressure.

As was the case last season, the Gunners are banking on a cup run to salvage something from a rollercoaster season. Beat Villarreal in the Europa League semi-final and we’ll be just one victory away from a backdoor return to the Champions League.

It’s set to be tense and exciting in equal measure and the boss is up for the challenge.

“The fact that you reach a semi-final is always a big boost, this club has always to be fighting for every competition we are involved in,” he said.

“Last night’s performance was a big indicator that under pressure the team can perform, that they have this spirit and desire to do well and show a real character.

“I really liked the mindset that the players had. From the whistle at the Emirates with a disappointing result conceding so late from a set piece, the players were convinced we would go through and that was really helpful in the preparations to get what we did yesterday.”

Arteta also called on his players to use the remaining seven league games to build further momentum. Arsenal are currently ninth in the table but could, with a run of wins between now and 23rd May, climb up a couple of places to snatch a place in the inaugural Europa Conference League. While Europe’s third tier is not where we want to be, it would be better than nothing if we cock up against Unai Emery or in the final.

“Now it is about winning football matches, at the end of the season you know you want to get a good run if you want to progress in the Premier League,” said Arteta.

“The priority now is Sunday [against Fulham], forget about the semi-finals, we now have two big games to play at home and we have to do our best to win them because if we do, the season will start to look a little bit different.”

He added: “I think the better we are in the league, and if we keep winning, the confidence will be higher, the spirit will be better, the players’ individual performances will maintain and that will have a knock-on effect on the Europa League, for sure.”

Fulham visit the Emirates at 1.30pm on Sunday.

This team can. Not sure that some of our other teams can. Can we play this team in all the big matches from now please.

Mari and Holding our best centre back partnership. ESR and Saka our best creative players. Partey best dominating the centre. Xhaka and Chambers great at passing and strong physically. Laca our best number 9. Leno our number 1. Pepe is dangerous. Overall our best team.

Let’s not go overboard here. Lacazette has played well in back to back games against championship-level opposition. But Aubameyang is by far and a way our best number 9. How short are people’s memories? Auba has hardly played upfront this season, but he has scored 36 goals in his previous two campaigns. With Laca barely making double figures *in his preferred position* on the same appearances. I do like Lacazette, and when the team is setup to maximise his strengths he can be a decent, high quality player. But let’s be honest Aubameyang has got hugely superior numbers since joining… Read more »

4 nil win yesterday with Laca. Auba dropped v Spurs, something going wrong there. Agreed Auba has been great at times but seems to have lost it a bit. Plus Laca is better linking up play.

2 year contract gives the chance to sell Laca after 1 year.

Sure, I think we agree. But he still has a year left. So a 1 year extension takes him to 2 total, giving us that chance to sell him next summer.. lIke you say.

Laca has had many chances and not proved it enough when it really counts imo. While Auba has not had a fair crack upfront yet. With these energetic and creative players behind, what’s to say he doesn’t go to another level as well? People have been judging him on performances as a quasi wing-back and that is just insane. The man is elite.

The contract would be renewed this summer and be for two years. So a one year extension.

Laca can play better back to goal than Auba, imo. Which helps with all the quick and creative players behind him.

This Arsenal team is a classic example of Dr Jekyll and Mr Hyde.

Won’t be surprised if they draw Fulham. 🤦

No foot Norbert
Reply to  Paul

Auba is deffo better at lw if the team setup shifts to allow him to come centrally from that position. As the lone striker he has to play against a team with a high line otherwise he doesn’t offer much else in the way of hold up. He can’t beat a man and isn’t a great passer either. Very good finisher though.

I feel like we are a side that operate in short bursts. Against so many teams in 2021 we have had moments of explosive aggression and creativity. What matters is that we score in these moments because we aren’t able to maintain this for 90 mins. Even last night after the third goal things quietened right down. We had extraordinary moments in games against Sp*rs, Wolves, Prague (1st leg) and Leicester but the final result was all about whether we took our chances or not. Here’s hoping that Arteta is able to elongate these periods as his tenure continues and… Read more »

Problem with us is, we dunno which Arsenal will come out and play. We are our worse enemy and we need to sort tt out…. Consistently.

They certainly can perform under pressure – last night’s emphatic win was evidence of that. The key word in MA’s sentence is “can” as it hasn’t been the case on more than a few occasions this season.

Building on consecutive wins – and no goals conceded – the team should be capable of pushing on to an above mid-table position and overcoming Unai’s lot in the EL semi-final. To do that, we’ll need the “Prague” Arsenal. Fingers crossed that they’re the ones who turn up.

If (and it’s an enormous if) we were to somehow win the EL, I’d be incredibly confused as to my opinion on Arteta’s Arsenal reign.
Would be an uncomfortably long list of absolutely woeful performances, and a shocking league position, but an FA Cup and the Europa League in 18 months and Champions League football..
Which I guess would therefore be the ugliest, most unenjoyable, unmitigated success ever?

This is an entirely true statement. Down voters just don’t want to face the reality of our current situation (understandably).

The statement isn’t really about our current situation, it’s about a theoretical situation 1,5 months from now. As such, it’s suggesting that opinions can change, but only so much, at least for some.

I suppose then it is a theoretical statement based on the best possible hypothesis over the next 1 or 2 months. If not I’d be interested, in very good faith, to hear a different perspective?

I think you’re right. For me personally though, the very best outcome would be that by getting ourselves back into the CL and stringing a number of wins together to climb up the table, and playing the kind of football this team is capable of on a much more consistent basis, we’ll all see the progression and will feel we can all chill on the negativity, and the conversation about the strengths and weaknesses of the coach can become more nuanced. Wouldn’t that be nice? I’d say let’s see what happens between now and the end of the season, rather… Read more »

Let’s just hope with that from the last two games and it being last hoorah of the season as it were, we can build on this and finish strongly. There’s definitely a team in there for sure, we just need to keep it going now

this team can ONLY perform under pressure

I thought Xhaka was brilliant as a makeshift LB. Helps to have an extra midfielder on the pitch who can keep possession well.

It might be interesting to keep Xhaka at LB and try KT as DM alongside Partey. I believe hes too good a footballer and has too big an engine not to be able to make the move.

You are assuming the team doesn’t need a good footballer with a big engine at left back. We need good players everywhere not just in Xhaka’s spot.

Except for the FA Cup which we threw this year and the Carabao Cup which we´ve treated with disdain for twenty five years.

We’ve made the League Cup final 3 times in the last 25 years.

I just want to see Pepe play every week. I think he is class. I hope arteta realises he doesn’t have the luxury of having every player perfectly slot into the system and do exactly as he says. We aren’t city yet so I hope he tells players like Pepe just play and go for it. Let xhaka partey chambers Mari etc keep the shape and win the ball back when we lose it up top

The template for Pepe is a Sane, a Sterling, a Mane. Those guys are brilliant even when they lose the ball, plus they post insane stats week in week out. To have Pepe whoosh about without assists and goals, or when not in possession, to hound and win balls closer to goal is a disservice to Pepe’s potential. He’s improving because of Arteta, let’s not forget.

“While Europe’s third tier is not where we want to be, it would be better than nothing.” Wasting time and effort on a competition even more tedious early stage Europa League? I’m really not sure that’s better than nothing. Better spend that time on the training ground and focus on the league.

I agree. And when will schedule these Eurovision league 2 fixtures? Friday nights???

Thanks Mikel, we know. The problem is without the pressure we always cock up. Hence our FA cup wins while crap in the league.

Just seen Everton-Sp*rs. The latter is a sorry lot without Kane. Everton not good either. I’m all in for Europa League, but I think we’ve a fair shot still for EL in PL .Not to difficult matches left for us.

Yes, a string of runs, and we should pass them both. Hoping that St Totteringham Day can be restored this year.

I have no issue with using the backdoor. Take what you can get, I always say.

This team likes performing under pressure so much that it conspires to return to pressure instead of trying to go up the league table.

Had to take a day to reflect on this victory. This was a big match on a couple of levels. The team kept alive the vital march toward the Champion’s League next season. But they also came together as a group—they worked from a collective motivation to defeat a club who’s response to a racist incident of one of their own was shameful. Arsenal were stronger than their opponents—much stronger! As happy as I am with the victory from a sporting standpoint, I truly hope the shot of Lacazette kneeling, staring stealy-eyed at the opponent prior to us utterly vandalizing… Read more »