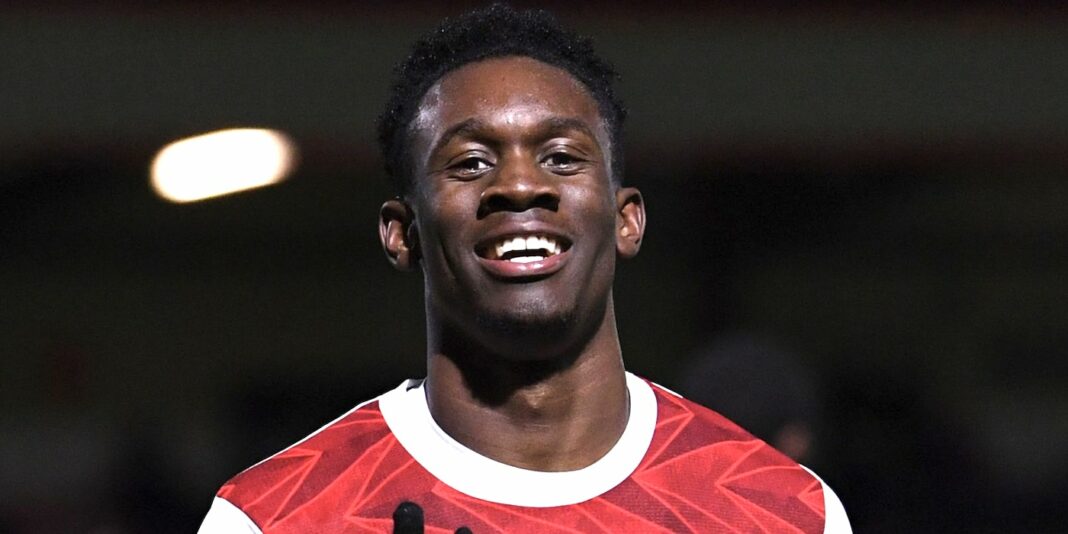 Arsenal have confirmed that Folarin Balogun has signed a new contract with the club.

The highly promising forward’s future had been in some doubt, due to the expiration of his previous deal this June, which would have made him available for free to clubs across Europe – although because of his age there would have been a compensation fee if he’d joined another English club.

However, the 19-year-old, who shares an agent with Bukayo Saka, Eddie Nketiah and Reiss Nelson, has put pen to paper on a four-year contract that ties him down until 2025.

Technical director Edu said: “It’s great that Flo will continue to be with us. He is a very promising young talent and has already shown so much quality in his performances. We are all looking forward to working with him during his continued development in the coming years.”

“He has given us glimpses with the performances and of course with his two goals already for the first team. The hard work starts here for Flo and we are all looking forward to supporting and working with him in the years to come.”

Balogun has made five first team appearances this season, four in the Europa League and one in the Carabao Cup, and in the grand total of 74 minutes he’s amassed, he’s scored twice and created one assist.

It remains to be seen what the plan is for him, whether he’ll be part of the first team squad next season or go out on loan to develop with regular football.

However, it’s good news, well done Edu and Arteta for convincing him to stay, and congratulations to Balogun on his new deal.

Here’s to many more appearances and lots more goals.

Arteta on Balogun: We had to undo what was happening

Balo gun is 19 yr old. He has hardly ever played for Arsenal
Considering Fabregas, RVP etc, it can safely be said that the lad is not a top, top player

No one knows the future, but right now this seems like a side show created for ESL drama

That might be true. But there are many players like Drogba, Zidane, Vardy and Pires who were late to the party. Too early to call this one 🙂

Viv The 🐐
Reply to  Savage

Since when are players at 19 finished?

we signed rvp for 2.75m quid when he was two years older than balogun. what point are you trying to make?

RVP was signed at 20, and he had played a full season – 27 games – for Feyenord – https://www.theguardian.com/football/2004/apr/28/newsstory.feyenoord

Point is simple – Balogun is not even making squad in this Arsenal team, so he may not be an RVP, and might be more like Nketiah or Nelson

Why are we celebrating him signing a new contract, as if we kept Fabregas for another year?

Everyone develops differently. There are players who have won Ballon D’ors who weren’t world class as teenagers.

But still, I don’t see the big deal here. Balogun basically has nothing on his highlights reel

We are desperate for some good news, that’s all.

Some great news to what has been a total bollocks of a season. I was trying my best to stay positive, but after the goal against Everton, I have lost total faith at everyone at the club. Apart from a few promising youngsters everyone should go.

Mate, I do like a bit of rant. But in this thread it’s somewhat akin to that angry bloke on Twitter.

So because Leno had his right foot at slightly the wrong angle when Richarlison fired in a cross, you lost faith in everyone at the club?

Or because he basically walked through Xhaka twice ?

Will somebody PLEASE give this man a hug! He DESPERATELY needs one!

I think they’ve done well to convince him that he will have a bright future at the club. Or future doesn’t look as rosy as I’d like it to look at the moment! Additionally, Arteta’s use of young players (unless forced by circumstances) wouldn’t fill me with confidence.

So all in all, a great result. Surprised it wasn’t announced the day after a bad result recently to try and distract from other issues!

And right there is my concern. I think with MA still on charge it matters not who we sign, we will only regress. He has an appalling record of managing and developing young talents

I totally agree. Especially with Saka and ESR 🤔

Saka has played the most minutes of a teenager in the PL, what planet are these people on?

Any thoughts on Willock, who has scored more goals like Laca, and Auba, being thrown out for loan?
Or AMN who is out on loan, while Xhaka plays as LB
Or Nelson who never gets a game, and is behind Willian and Pepe
Or Nketiah, who was forced to cancel loan with Leeds, just to sit on the bench

Would have willock n amn back .

Emery team/ midfield three would have been, had he stayed.

Saka was well an truly established before Arteta became manager. ESR was given his chance far too late in my eyes. We were so bad. Arteta was desperate by then. He could and should have played him earlier. Hence the concern.

A record stretching back all of 15 months?

Fantastic news. If Eddie is on his way out, we should give this man chances instead

Our youth prospects could be so important to bailing us out of what could be a scary future. We have potentially saved a lot of money too.

They’ve only gun and done it!
Start him on Thursday

He does shine in the EL. with laca’s absence, I’d fancy him to start

Looking at the way he plays, could be a system in future where he and Eddie work well as a pair? Balogun looks like he wants to roam, could hold the ball up if we need (has the strength and the technique already) whereas Nketiah is better playing on the shoulder. Not a solution for every game, but would be a good alternative to a 4-2-3-1. Lord knows we need a plan b!

Not sure Eddie will be part of Arsenal’s long term future. A decent finisher but does not offer enough overall. Martinelli has a more all round game and would expect him to be a better prospect for the club.

Finally, something to celebrate after an abysmal weekend. That boy is good. Nketiah will have to up his game at least. Now let’s do ESR.

Any juice on how much we’re paying him?

Good news – confirmed at last. It makes up for the whole ESL fiasco, doesn’t it? Well, not really – but it’s still good news nevertheless.

Arsenal have done a brilliant job with the signing video on the official website Not sure I’ve seen anything like it before for a youth player who’s only played a few minutes Looks like he won’t be loaned out, and will be part of the first team next season, which means something will have to give, particularly with the prospect of no European football Lacazette, Nketiah, Aubameyang, Martinelli, Balogun Lacazette + Nketiah with both 12 months remaining look like the most likely to leave Would be amazing if we pulled another one top player out of our academy next season,… Read more »

I think this is great news. But the agent situation is troubling. Just hypothetical examples: Isn’t it possible that the best thing for Balogun is to sell Eddie? Or that Eddie’s chances to play are reduced by Balogun’s contract? I’m not talking about dishonesty or intentional manipulation. But sometimes there are genuine conflicts of interest that arise from the situation itself, not anyone’s trickery. How can one person adequately represent both parties?

Well that’s a bit of good news at least!

I remember it well – Gibbs, Ramsey, Chambers, Wilshete, Walcott, Jenkinson, the Ox all tied down to long term deals. We are the future of English football.

Aaah. Jenkinson. We loved his spirit but he was a desperately poor player. I think that line up of the not so magnificent 7 was when the decline began.

The Magnificent 7 were fine. It was the clowns in the centre of the defence that let us down time and again. 2015/16 for those with short memories…

Actual chuffed with this. same agent as Saka, Nelson, nketiah? If that agent ever needs his balls licked, I’m available.

Mr Eddie Bonsu [email protected]. this is the email and you can ask him yourself because I’m certainly not going to.

I like the cut of his jib. Good impact sub now with a really promising future.

How low have we stooped to celebrate this signing. Kid must be like the next anelka

Guns Up
Reply to  Filsuf

Why wouldn’t we celebrate keeping an exciting young prospect? Why wouldn’t ANY clubs supporters celebrate that?? In what way is that “stooping?” There are enough things to be upset about at Arsenal right now – no need to try to piss all over one of the silver linings of the massive cloud hanging over the club.

Guns Up
Reply to  Guns Up

See, the whole idea is that you develop young players and that they turn out to be good enough to keep on. If the team thinks he’s good enough, that’s a success and worth being happy about.

Great. Now, start using him instead of Nketiah.

Maybe no one has told you before but, the great thing about being a supporter of a football club is that you’re actually allowed to like more than one player at a time.

Hopefully, he will have a better man manager and coach to improve and develop him.

He’ll probably end up warming the bench whilst Willian stinks the fucking place out next season anyway.

One for the future.

In the meantime…
KROENKE OUT
ARTETA OUT

When first reported an article on this had 100 more comments than this one.
for some really good news that’s low interaction numbers.
are we so disenfranchised with Arsenal now that we just don’t care about football and just want those Scrooge Americans to fuck off?