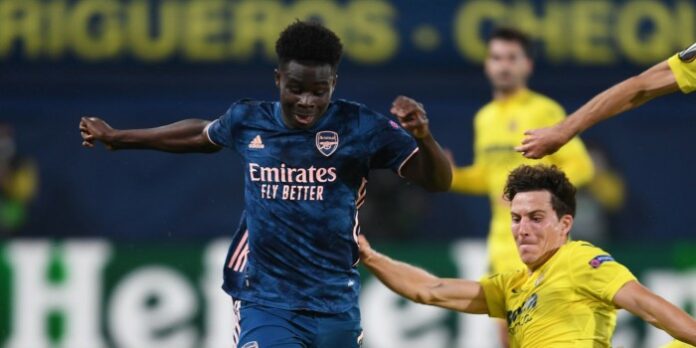 Arsenal may have lost 2-1 to Villarreal in the first leg of our Europa League semi-final but Bukayo Saka believes the dynamic of the tie has swung in the Gunners’ favour.

Mikel Arteta’s side looked dead and buried when they fell two goals behind and had Dani Ceballos sent off but a Nicolas Pepe penalty, won by Saka, halved the deficit before the home side were also reduced to 10 men when Etienne Capoue received two yellow cards.

After the game, Saka lamented a poor start but is confident his teammates can now make the final.

“There are a lot of positives that all came in the second half,” said the winger.

“It’s a semi-final of the Europa League so to start the game like this, it was impossible to have a chance of scoring. We didn’t create anything, we lost every duel, we were passive.

“It’s really frustrating to look back on it. I’m just happy that in the second half we picked ourselves up and got a good chance and managed to score. We’ve given ourselves a chance at the Emirates.”

Asked if the Gunners return to London confident they can progress, Saka continued:

“Yes, 100 per cent. We definitely showed we’re better than them. Even with 10 men, we were dominating them. It’s up to us. It’s always up to us.

“We have a team full of quality players and when we play properly, we can beat anyone.”

I’ve got to say, we definitely didn’t show we were better than them.

They created chances, we didn’t. I don’t know their team well enough to know how much their injuries will affect them but ours are clearly affecting us. We need Tierney back.

We were terrible until Ceballos got sent off, then we played well 10 vs 11, once their guy got sent off we were below average. Very weird.

Strange. Arsenal is such a difficult team to follow at the moment.
Arteta takes a lion share of the blame.
You could see Unai’s imprint on Villareal, but our boys were all over the place.

Better at getting an embarrassingly soft penalty. Other than that? They were by far the more dangerous team.

i want whatever he is smoking…. we were better than them?!?!?!
yeah at cocking it up we were.

We were close to tying of auba had put the shot away. They outplayed us in every way yet we still somehow made it close. Despite a horrible performance we still have a chance

You’ve certainly given us a chance. By diving.

It’s part of the game now. Get used to it

Sure, when Harry Kane and Son do it we murder them and rightly so. When one of ours does it (a 19 year old nonetheless!), its part of the game. Levels of hypocrisy.

Totally agree. I’m sure when it happens to us Gunner08 says ” Ah well, it’s part of the game now. Best get used to it”

Saka’s plenty good enough without bringing that into his game

Less of a dive more – leave your foot out there to catch on the defender’s leg.
Its a dirty trick, its not in the spirit of the game, but given I want us to get to the final, I ‘ll take it all day long.

I really don’t understand our pressing from the front. We close down with single players where its so easy to pass round them and is literally just our forwards tiring themselves out. Then you watch everyone else do it, like Villareal today, and they go in packs, rush us playing out from the back, force mistakes etc. How are we so bad at it??

Because we don’t press from the front. Arteta’s foregone that long ago. We press from the middle third, the players are expected to be ready to sit back and park the bus. See every time the opponent has the ball near the centre circle we’re deep inside our third. When that doesn’t happen, that’s when we concede goals like Villareal’s first.

Even if we cross the yellow sea without the submarines sinking us, we are likely to meet the red sea in the final.
Can Arteta be our Moses?
I wouldn’t want a repeat of ’19.

MA made this game difficult for us

I think the biggest positive out of this game is Ceballos red card. Arteta will need to have Xhaka back in midfield in the second leg. We’re missing those lateral passes to the full backs from Xhaka. He’s also gives out defense a bit more protection.

Quote, we can beat anyone. Prove it, because so far theres nothing to suggest that you can.

Played at schoolboy level for a professional club , but whether it’s your local Sunday league team , or cub scouts team, you need a focal point , a centre forward who the whole team needs and expects to score , fuck this false shit , a proven forward lifts the team , disgrace in a semi final we started without one