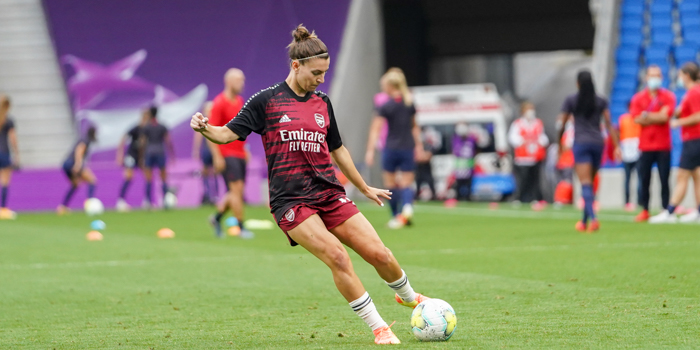 Arsenal manager Joe Montemurro has confirmed that Steph Catley will feature in the Arsenal squad for Sunday’s game against Brighton & Hove Albion. The Australian has been largely absent this season due to a nagging hamstring problem, which eventually required surgery in January. Catley joined the club from Melbourne last summer with the Gunners fending off competition from Lyon for her signature.

Montemurro says his compatriot will be in the squad on Sunday for the first time since she played a few minutes as a substitute in the December defeat at Manchester City. Speaking to Arseblog News on Friday morning, Joe Montemurro confirmed, “Noelle (Maritz) and Steph will be in the squad, it’s great to have Steph back with us. We’re hopeful that we can give her some minutes over the next few weeks which will be fantastic.”

Swiss full-back Noelle Maritz missed last weekend’s match against Gillingham due to heavy bruising on her shin but she will be in the squad, “Noelle has trained ok but she is still pretty badly bruised. There is a bit of caution there so we will assess that in terms of whether she can start or not but she’ll definitely be in the squad.”

Meanwhile, Viki Schnaderbeck has been missing since November with a knee injury. Montemurro says it is not certain that she will play again this season, “We’re just assessing the future for this season with Viki, we’re just getting some secondary medical advice on that and I can probably let you know next week.”

This season the women have split their time in training between the club’s Hale End and London Colney facilities due to covid protocols. I asked Joe what drove when the women’s team were able to use the primary London Colney training base.

“It’s down to numbers at the moment at both facilities. We have to be careful in terms of numbers and that’s down to government regulations. So it depends on the number at either facility. The main concern is that we (the men’s and women’s teams) don’t enter one another’s bubbles.

If Joe had his way most of the team would be Australian. Joe’s treatment of Jordan has now become clear his decision to leave means he will not be around to deal with the fall out. Lets hope the next manager knows how to treat the players properly and play them in the right positions.

I hate how Joe has treated Jordan this season but not sure what the Australian players (a goalkeeper, a winger, and a left back who’s been out for most of the season) have to do with it… if anything it’s Roord whom he favours over her.

I was thinking the other day, I sometimes understand *what* Jordan’s role is in a match, but I never understand *why* and what we are gaining. I remember from a few seasons ago a player full of swagger and invention, going wherever she wanted on the pitch, pulling off audacious, preposterous goals and enjoying the hell out of a game of football. Where is that player now and how are we better off without her?

Yes. There have been times this season during matches against weaker teams where I’ve thought “Jordan and Katie link up really nicely with each other”, but that’s just by virtue of them being good footballers, it’s not because they’re playing in their best positions. I think Joe might see Jordan display excellent ability out wide and it’s led him to believe that she’s a winger, when she’s obviously more effective in central areas. It’s a real shame as I feel we could’ve played better against big teams if he had been less stubborn about playing her out wide. Playing Jordan… Read more »

Sorry Ed, should have made myself clearer, Joe’s preference for his fellow Aussies is a totally separate issue to his treatment of Jordan. As for Roord I agree with you.

Welcome back, Steph. Fingers crossed you get no setbacks.