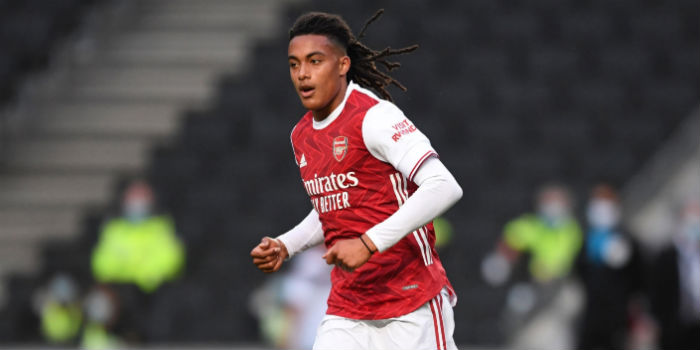 Arsenal U18s concluded their season yesterday with a 2-1 victory away to Chelsea.

Midfielders Miguel Azeez and Jack Henry-Francis were on the scoresheet, with Arsenal moving up to fourth place, although Tottenham, who still have a game remaining, could knock the young Gunners down to fifth.

It was Azeez’s final appearance at U18 level, although in truth he has been beyond this stage for some time having predominantly featured for the U23s during the past 18 months.

Azeez will hope that he will be able to receive further first-team involvement soon, having already made his senior debut in the Europa League.

The goal that Azeez scored against Chelsea was of a very high standard as he managed to skip past several players before finishing well.

Henry-Francis, meanwhile, still has some way to go to get close to the senior squad, but he too has developed well this season.

The 17-year-old possesses an excellent passing range, but there are occasions when he can get caught out defensively.

This season Henry-Francis has mostly played for the U18s but he has also broken into the U23 squad and he should receive more chances at that level next season.

Any ideas on how Azeez’s contract talks are coming along? I was under the impression that his current deal expires this summer but haven’t heard a lot about an extension? Cheers

I have great expectations about this guy next season. It’s sad there might not be enough games to give him game time.
Could a loan be on the cards, maybe in January, be on the cards?

Hope we can build a strong core like Xavi, Iniesta, and Busquets.

Let’s hope the academy keeps producing because our millions spent on recruitment can’t even get near a bunch of Hale End lads.

ESR and TP is a silly comparison. Totally different types of players

Comparing DM with a CAM! 🤦🏽

Really hope Arteta gives Azeez a run-out in one of these last mstches…HeCould be another one to make it to the first team set up.

Henry-Francis sounds like a hybrid of our best and worst strikers in the Wenger era.

I like what I see from azeez but the talk always seems to be about this lad and never cottrell who is such a clever mobile player who does the right things at the right time and with high tempo. Hes not flashy at all but is exactly the type of player that great ball playing teams are built around