We have seen this exact match play out tens of times, just usually it is Chelsea that is one that it is capitalizing on a mistake and then defending like crazy to see out a win. It is certainly nice for the shoe to be on the other foot for a change.

Normally I would say something like “well, the overall performance wasn’t great and maybe we got away with one,” but beating Chelsea always feels good and I am quite okay to say that we rode our luck to three points because against teams that are better than you, you need those things to go your way.

Chelsea 0-1 Arsenal: By the graphs 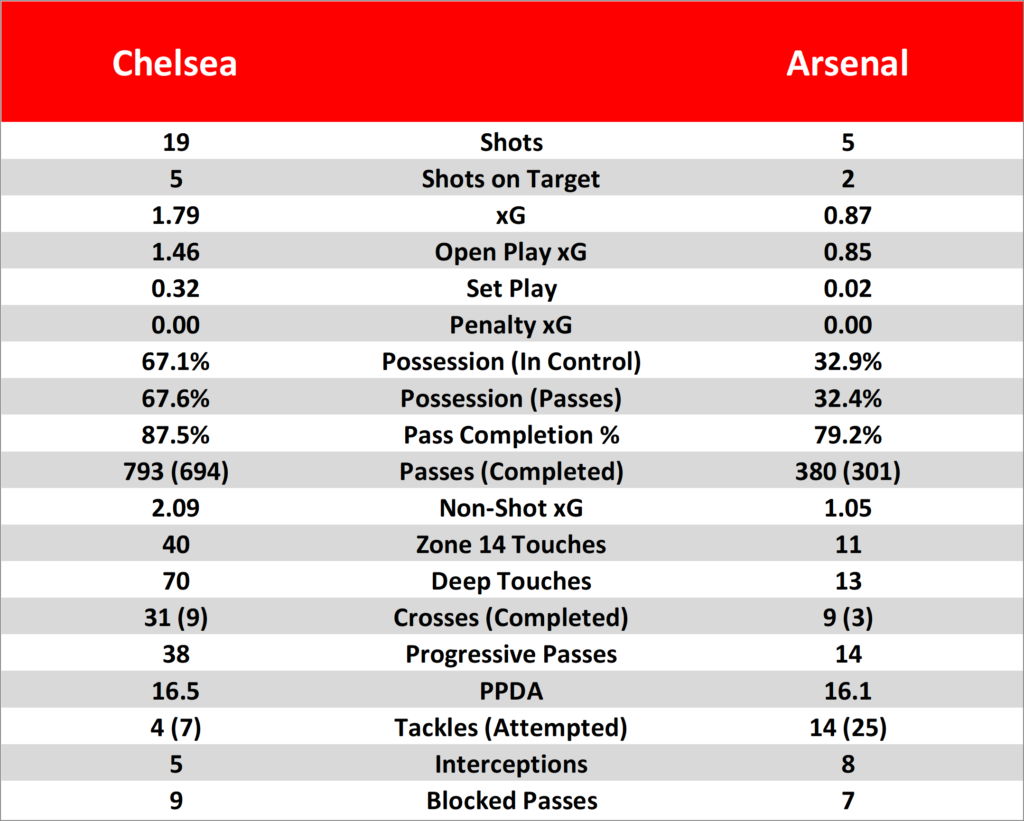 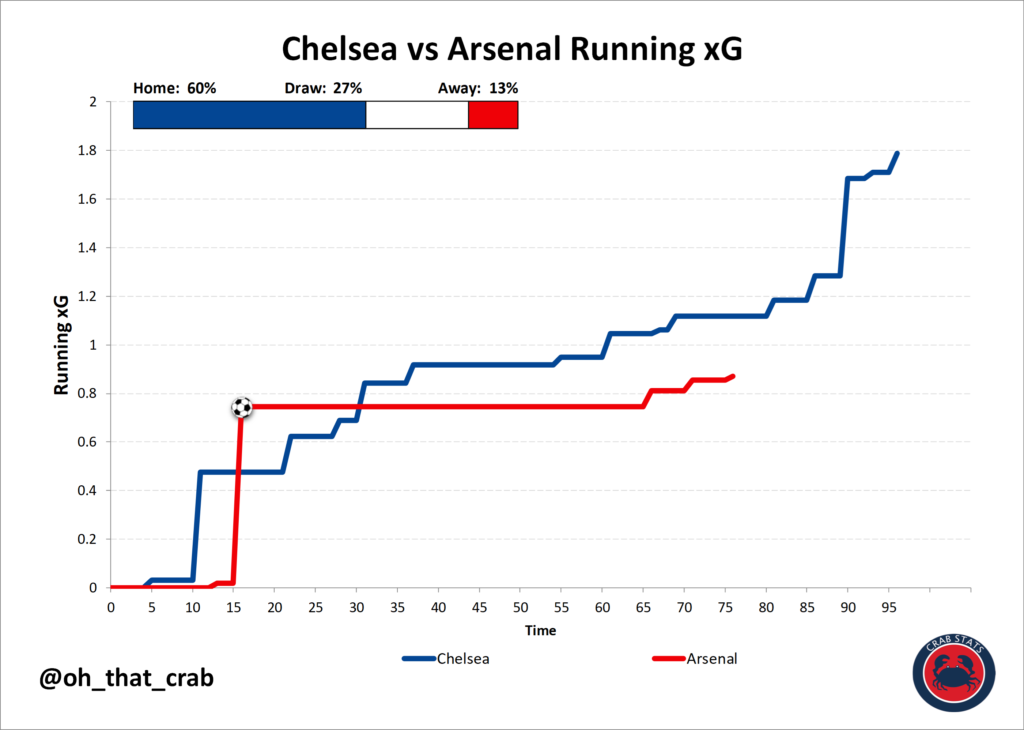 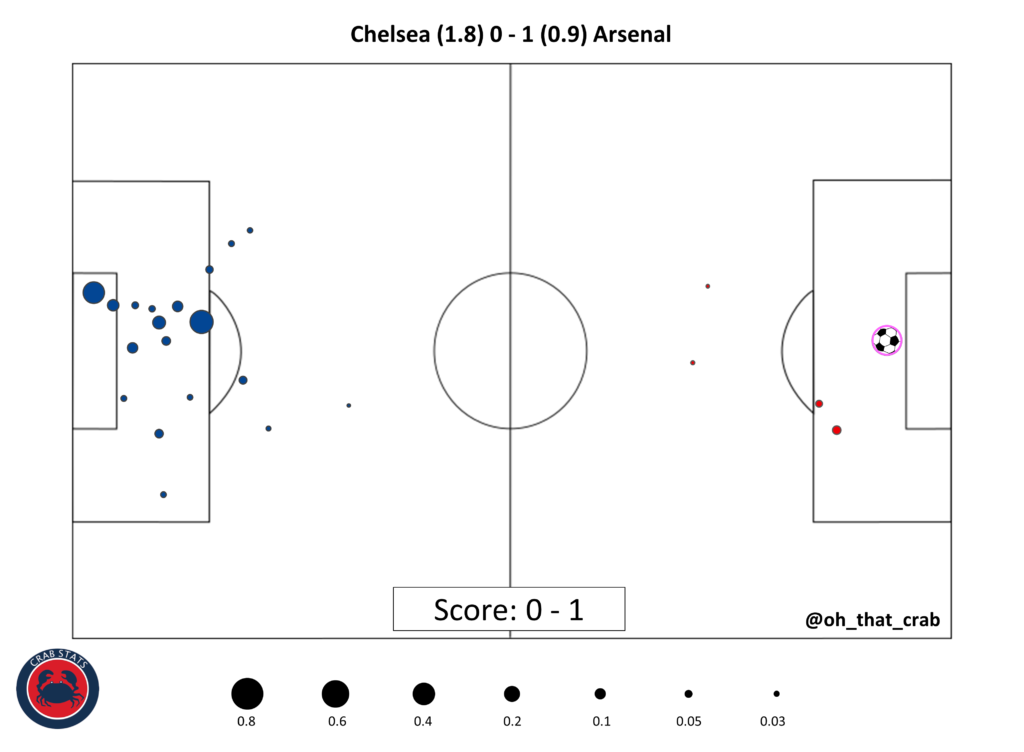 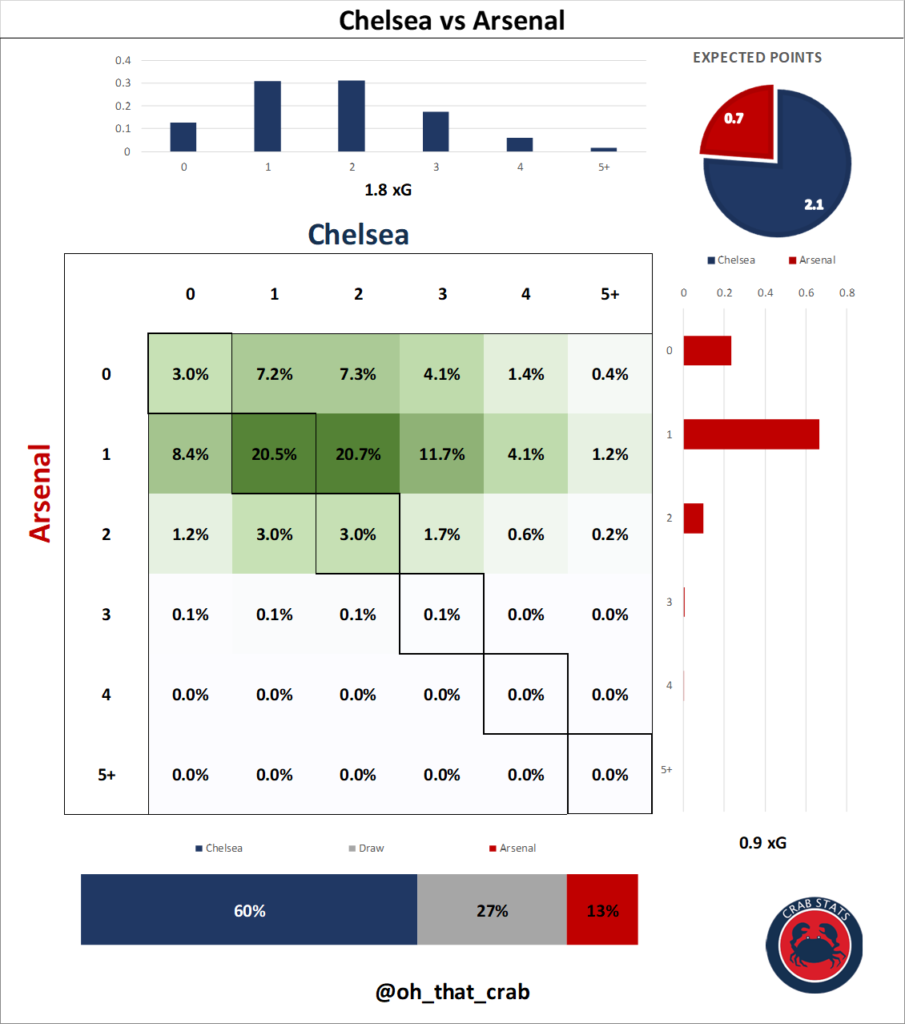 1 – Shot in prime (the imaginary half circle from the penalty spot to the end lines) for Arsenal, Emile Smith Rowe’s goal.

2 – Shots in prime for Chelsea in the first half.

2 – Big chances for Chelsea, Kai Havertz 1-1 and Oliver Giroud’s volley from the Bernd Leno save.

13 – Touches by Arsenal within 35 yards of the Chelsea goal.

70 – Touches by Chelsea within 35 yards for the Arsenal goal.

48 – Touches by Chelsea within 35 yards for the Arsenal goal in the second half.

2 – Open play pasees completed into the box by Arsenal.

17 – Open play passes completed into the box by Chelsea.

12 – Open play passes completed into the box by Chelsea in the second half.

9 – Touches in the box for Arsenal.

55 – Touches in the box for Chelsea, with Mason Mount (12), Kai Hazertz (9), and Christian Pulisic (9) matching or bettering Arsenal’s total as a team.

1 – Errors leading to a shot by Arsenal.

1 – Error leading to a shot by Chelsea.

Looking at the stats above, it matches well with my main takeaway from the match. Chelsea dominated possession and field position by for the most part Arsenal did a very good job of bending but not breaking in defense. With Chelsea camped in Arsenal’s final third, they had 359 touches in the final third compared to Arsenal who only had 459 touches in the whole game, it was very impressive how well Arsenal did to limit the ball entering their box.

This is also an example of where the score dictates things. I imagine if Arsenal had scored at say the 61st minute instead of the 16th minute things wouldn’t be nearly as onesided as things turned out.

The last thing in this section that I want talk about is the error stat. I think that it provides very valuable information but sometimes I am not certain on when exactly it should be assigned. There is a pretty big difference between how Opta and FBRef seem to count them as well, for example in this match Opta has one error for Arsenal that led to the Havertz chance but FBRef has Arsenal with 0. For the season Opta has Arsenal with 14 errors leading to shots (slightly above average, tied for 12th) but FBRef has Arsenal with just 6! Regardless it is very nice it is be gifted a goal because Arsenal have certainly done that several times for our opponents this season.

5 – Progressive passes received by Martin Odegaard, leading Arsenal. I didn’t think that this was Odegaard’s greatest performance but he was the main outlet for Arsenal when they tried to get the ball out of their own half. I am not sure that role really fit him, as he seems much better suited to playing in a ball dominant team than when with 10 to 11 men behind the ball.

4 – Saves by Bernd Leno in this match. Overall Leno has made 79 saves this season (ranks 14th) and has saved 69% of the shots that he has faced (also ranking 14th). Overall he has done well based on the location of those shots where he has saved 3.7 goals more than an average keeper (ranking 9th). Even at claiming crosses he is mostly fine, claiming just under 8% of the crosses into penalty box which mathes the average of the Premier League. All of this is just to say that I would be happy to see him stay with the team but I also wouldn’t be too worried that Arsenal couldn’t find someone better if he were to leave in the summer.

19 – Forward passes for Mohamed Elneny, 46% of his total. I like to beat up on Elneny for only passing sideways and backward but in this match he looked much better at actually looking to get the ball up the field. He also led Arsenal in this match with 6 progressive passes completed. He was also a key part of the Arsenal press in this match with the second most final third pressures 8.

15 – Defensive actions by Thomas Partey, leading Arsenal. Partey was immense in this match defensively and a key part of why they bend but don’t break system worked well. All of those years doing it at Atleti made him seem very at home doing it against Chelsea. In this match he had 5 tackles (9 total attempts and just 1 foul), 3 interceptions, 9 ball recoveries (including 3 in the final third), 1 blocked shot and 2 clearances.

Sources: Opta via WhoScored, StatsZone App and my own database. StatsBomb via FBRef.

We have more points since Christmas than Chelsea (FA Cup and CL finalists) and all other teams bar the Manchester clubs (12 more points than Liverpool and 10 more than Sp*rs). We were rubbish beforehand and could have been better after Christmas fairly easily (eg Xhaka mistake v Burnley). Defensively we are good, attack less so. If we can get that sorted out and play consistently well through the season we can do a lot better.

I’m not saying everything is great, far from it. But a good summer and preseason can give us a foundation to improve.

Yeah, when you think what might have been, the Wolves and Fulham games (and to a lesser extent the Villa and Everton games) this side of Christmas also sting a fair bit.

This makes more sense than the usual “sack the manager, he’s sh!t”

I think we need a target man for all those crosses we bump into the box.

Someone with Xhaka’s leadership qualities, but better football skills to protect Partey.

Would love to see Guendouzi once more.

Not forgetting Tierney too. He needs a deputy.

I thought we got Partey to protect Xhaka…

I agree. The season hasn’t been a total loss. We all expected more and its the expectation that kills. We are on track to get better points, more wins and less goal conceded in this season compared to last season. The 1 thing we failed at, compared to last season, was not get to the final of a cup competition. Yes we have a rookie manager and I think we should give the team a break. We all know how we were in our rookie years of our 1st job. The effort and willingness to do well is there. They… Read more »

yes i think consistency will be easier next season with (hopefully) fans back in the stadium, a more settled squad and anyone who is not on board shifted out over the summer. having the midweek for work on the training ground might be a bonus too if we don’t qualify for the meaningless ECL.

Agree on home fans, that hasn’t helped with the very poor home performances we’ve had this season so should be better next season (though may have helped us away).

And play ESR more. Our win rate with him is twice as high as without!

Those figures are horrific.

A win is a win and I will take it every time. I don’t care if we were on the back foot for most of the game. Most teams are when they visit Stamford Bridge. It was a good result but it does not suggest a turnaround in fortunes. There is a lot of work to do and Arteta may very well not be the one to do it – after all, he caused his fair share of it. But he cannot be entirely blamed – for that you need to also look at Wenger, Gazidis, Emery, Vinai, Raul, Edu… Read more »

agree about the early goal influencing the approach. our pressing and defensive work was very very good. given the situation i have no problem with us grinding out the victory and it’s nice to know we can do it away to one of the form teams in europe. hopefully next season we can put it all together and be more consistent.