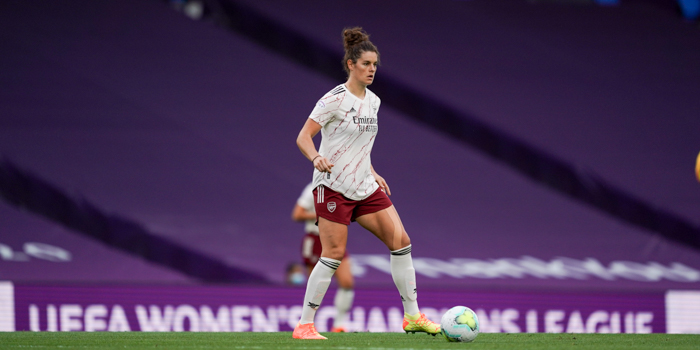 Arsenal defender Jennifer Beattie has undergone surgery on her back in an attempt to fix a long-term issue. Beattie has missed large chunks of the last 18 months with lower back, hamstring and calf injuries since first pulling her calf in December 2019 in an away match at Everton.

That injury sidelined the Scotland international for longer than expected. Beattie pulled up again during the first competitive match of the season against PSG in August and has since struggled with two other soft tissue injuries.

Arsenal revealed today that ‘Beats’, who was also diagnosed with breast cancer in October, has gone under the knife in an attempt to treat the problem long-term. “She now begins her recovery process with the support of specialist care, but sadly her injury rules her out of selection for this summer’s Olympic games,” a club statement read.

The player said that she had been managing a back complaint for the last decade or so. “t got to the point this year where a little discectomy was needed. So I’ve quite literally ended this season on a high.” The club confirmed that the surgery would rule Jen out of the Team GB squad for this summer’s Olympics.

Mehn, the frequency players get cut and stitched is kinda scary.

I know it’s (usually) not painful, but…

Good luck, Jen Beattie. I hope all goes well and you come roaring back for the start of next season.

Poor, poor Jen it never rains it just pours!
Let’s hope she can be fit and well for next season.

Jen has certainly been “through the mill”.
Wishing her all the best and let’s hope she gets back to full health soon.