THE LOWDOWN
Arsenal Women take on Chelsea for their first friendly for this pre-season. The Gunners start their WSL campaign at home to the same opponents on the first weekend in September, however, Arsenal have between two and four Champions League qualifying rounds to play before then. They need the match practice, even if many of the squad are in Tokyo competing at the Olympic Games.

This match represents new coach Jonas Eidevall’s first game in charge of Arsenal- he only arrived at London Colney late this week after observing a period of quarantine having served out his notice with Rosengard until July 12th. This also marks Arsenal Women’s first game at Emirates Stadium since the summer of 2019.

Go behind the scenes at London Colney 👇

Both teams are early in their pre-seasons and are depleted by participants in the Olympics, the game is more crucial for Arsenal’s preparation than Chelsea’s at this stage, given their season starts three weeks earlier than Emma Hayes’ side, who will be without the likes of Fran Kirby, Sam Kerr, Magdalena Eriksson and others.

For more information on the Arsenal squad, I put together a player profiles piece here. Earlier this week, I also chatted with Swiss midfielder Lia Wälti about this game and the women’s team playing at the Emirates more generally, which you can read here.

TEAM NEWS
Arsenal will be without Lotte Wubben-Moy, Leah Williamson, Steph Catley, Kim Little, Vivianne Miedema, Nikita Parris, Lydia Williams, Caitlin Foord and Mana Iwabuchi, who have all been competing at the Olympic Games in Japan. Viki Schnaderbeck is not quite ready to return, after undergoing knee surgery earlier this summer.

However, Jen Beattie should be fit to play after undergoing back surgery in the spring, while Danish centre-half Simone Boye and Norwegian midfielder Frida Maanum are in line to make their debuts. Goalkeeper Fran Stenson is also fit again after missing the back-end of last season with a broken thumb.

LAST TIME OUT
The clubs last met at Emirates Stadium in April 2012 in front of 5,000 spectators in the WSL. Arsenal ran out 3-1 winners on that occasion thanks to a brace from Kim Little and a goal from Katie Chapman. When the teams last met at Meadow Park in November, the scores were tied at 1-1- Beth Mead gave Arsenal the lead on 85 minutes before a stoppage time equaliser from Chelsea after a cross ricocheted into the net off Lotte Wubben-Moy.

THE OPPOSITION
Chelsea are the team to beat at the moment in the WSL, boasting the deepest squad and they have won the league title and the League Cup in each of the last two seasons. Arsenal should not have finished 10 points behind them last season, however, Chelsea are one of the best teams in Europe at the moment, even if they were beaten 4-1 in the Champions League Final by Barcelona in May.

Great news! 🙌@Berger_Ann has extended her contract with the Blues! 💙

PLAYER TO WATCH
Signed from Linkoping in Sweden earlier this week, Frida Maanum has only just turned 22 but captained Linkoping last season and went to Euro 2017 with Norway at the age of 18. Maanum is considered one of the finest young midfield talents in Europe, she already has 33 caps for her country. She scored seven goals and had three assists in 20 appearances for Linkoping last season.

Maanum is one of the biggest talents coming out of Norway. Her ability in the final third & vision is incredible. She has a wicked shot on her. Great in 1v1 situations and loves to drive forward with the ball. pic.twitter.com/ifTbG6x3gp

She was playing competitive football right up until the end of June in the Damallsvenskan so she ought to be in good physical shape too. “We are very happy to bring Frida into our squad,” coach Jonas Eidevall told Arsenal.com. “She is already an experienced player and her technical ability paired with her leadership qualities will align to the style of football that we want to play here. We are looking forward to working with her.” 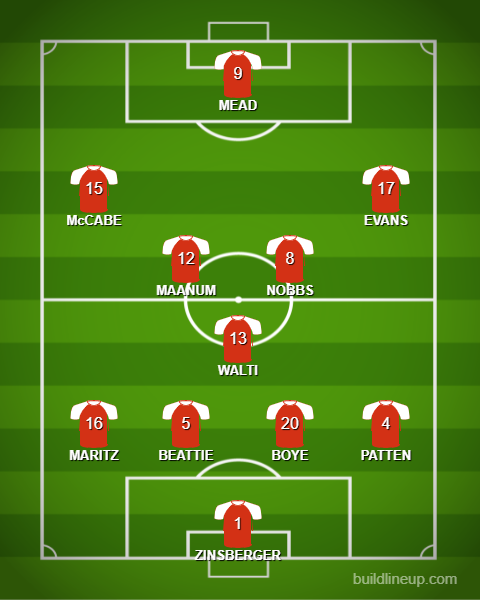 HOW TO CATCH THE GAME
The match kicks off at 12.15pm at Emirates Stadium, prior to the two men’s teams playing one another. If you have a ticket for Sunday, it gets you into both matches. This game will be streamed live on Arsenal.com, free for Arsenal members or else for £7.99 for non-members.

COMING UP
We will have exclusive match reaction from Head Coach Jonas Eidevall on Arseblog News straight after the match on Sunday. We will also record a podcast looking at Arsenal’s four summer signings- Nikita Parris, Mana Iwabuchi, Simone Boye and Frida Maanum during August.

Excited to see the Maanum – Walti – Nobbs midfield for the first time! Feel like Nobbs and Maanum could complement each other really well, hopefully they can build a good connection over the season

Chavski buying more titles, you do surprise me!!!

That’s quite a good looking 11.
I hope Fran Stenson gets some minutes..

Still a decent looking 11 despite those finding their way back from Tokyo.
Don’t suppose we have much of a bench though!
It will be a very different game come September!