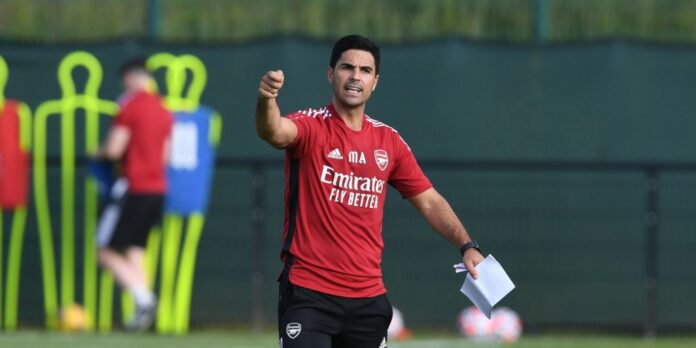 Arsenal arrived in Scotland yesterday morning for a week-long training camp that will include the first two friendlies of pre-season.

The Gunners face Hibernian at Easter Road at 6pm (BST) this evening and then head to Ibrox on Saturday to take on Rangers as part of the Scottish champions 150th-anniversary celebrations.

After a couple of days back at London Colney, Mikel Arteta will then take his players Stateside to Orlando for another seven-day camp and two games as part of the Florida Cup.

Where is the camp?

Arsenal are training at Oriam; Scotland’s national performance centre for sport, which is based at Heriot-Watt University’s Riccarton campus in Edinburgh.

Who has made the trip to Scotland?

The squad is a blend of familiar faces and academy hopefuls with the latter filling the gaps left by those who’ve been on international duty this summer.

Fresh from his new contract and promotion to the first team, Arthur Okonkwo is expected to be in goal this evening. Flo Balogun, who penned his new deal before the end of last season, is also included.

Other youngsters angling for some minutes include:

Who hasn’t made the trip?

Gabriel Martinelli is heading to Tokyo to play for Brazil’s Olympic team. Gabriel Magalhaes had been selected but he’s picked up a knee injury. Having played a number of tournament warm-up games in recent weeks, he’s now on holiday. Lucas Torreira, who has been playing the Copa America with Uruguay, is also enjoying some downtime.

William Saliba has been excused from the camp. He’s been pictured in Marseille where he’s due to finalise a season-long loan deal at the Stade Velodrome.

Emile Smith Rowe’s usual number 32 is being worn by keeper James Hillson suggesting the midfielder is in line for a lower squad number when his new deal is announced soon. The club photographer has been careful not to let the cat out of the bag.

We’re also waiting to see how Rob Holding’s hair transplant worked out. We’ve not seen any photos of him so can’t confirm his presence.

Other things to note

Arsenal are expected to wear the yellow away kit against Hibs this evening and will then wear the new home shirt at Ibrox on Saturday. The home kit will be launched later this week.

Tonight’s match will be the first time Hibernian have hosted fans at Easter Road since March 2020. A digital version of the programme is available here.

Hibernian and Arsenal have played each other three times; the first was all the way back in April 1926. The friendly, organised as part of a deal that saw Scotland international goalkeeper Willie Harper make the switch to North London, took place in front of a crowd of around 4,000 people at Highbury.

Why is there no reference to Macy? In the program too?

He plays for Hibs now
https://en.wikipedia.org/wiki/Matt_Macey

What about Aubameyang? Don’t see any mention of him in the article, so just checking if he’s actually not travelled with the team or forgot to mention in the article? 🙂

Read it again he is there!

Well, his name wasn’t there when I posted the comment so they must have added his name after that. Anyway, good to read he’s with the squad.

@AAllenSport
Author
Reply to  The Dutchy

Sorry, oversight the first time around. We updated pretty swiftly!

WayBackWhen
Reply to  The Dutchy

“Pierre-Emerick Aubameyang and Nicolas Pepe are all present.”

What about Azeez? Is he injured? I’m surprised he’s not included. That list of senior players travelling to the game is so depressing.

Even more depressing when you realise that majority of our potential starting 11 consists of players on the list. Bellerin, Mari, Partey, Elneny, Smith-Rowe, Pepe, Auba, Lacazette could all very well be in our team for the start of the season. The overall quality of our individual players has decreased substantially over the last 5 years and even more over the last 10 years. And even back then we were crying for improving our squad. Since we don’t have the money to sign proven, top class players, we must hope that our signings, i.e. players like Lokonga, realise their potential.… Read more »

Who knows. Maybe we end up with a squad full of Tierneys, Martinellis, Lokongas, Gabriels, Whites, Pepes, Rowes and Sakas.
Perspective buddy. Try it

If Arteta could figure out how to clone Saka, Tierney, ESR, and Martinelli (and maybe Pepe and Gabriel), then the league title would be pretty much guaranteed.

Surprised Taylor-Hart isn’t in there as well, wonder if it’s something to do with his contract extension

Wonder if the formation tonight could give any clues as to Arteta’s thinking for the season?

Arteta will no doubt continue to use different formations for different opponents, as and when.

Hell of an effort to go to, just ‘cos Kieran fancies a couple of deep fried pizza slices washed down with a bottle of Buckfast.

Quite. Is Irn-Bru and deep friend mars bars really the best way to build up the player’s fitness levels?

Hopefully there’s a straightforward explanation for Holding’s absence. Would suck to have drama with him around the White deal. While not quite the player we hoped he’d become, he’s been a loyal servant to the club.

Noticed Holding and Chambers are not included, unless by omission…