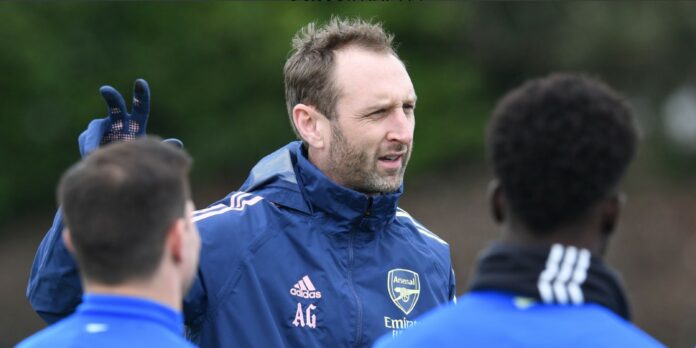 According to Charles Watts, Arsenal have appointed Nicolas Jover as a replacement for first team coach Andreas Georgson.

Georgson has been appointed Sports Manager at Swedish side Malmo, for whom he’s worked previously, after spending a year at London Colney honing Arsenal’s efficiency from set-pieces. While the Swede won’t officially start his new role until January, he’s due to assume some responsibilities from the autumn.

Mikel Arteta has moved quickly to ensure Georgson’s responsibilities at Arsenal are covered. Jover actually preceded Georgson at Brentford and crossed paths with the boss during a two-year stint working under Pep Guardiola at Manchester City. The Athletic reported his Etihad departure four days ago.

According to Training Ground Guru, the Frenchman became fascinated with video analysis during his time at university in Canada and, via a short stint with a local side, landed a gig at Montpellier in 2009. He was part of the backroom team that helped Olivier Giroud’s side to a surprise Ligue 1 title in 2011/12.

Prior to landing his job with Brentford, Jover also worked with the Croatian national team. It’s certainly an interesting CV.

The majority of Arsenal’s first team squad will return for pre-season training on Wednesday. Presumably, Jover will be there to greet them.

Hopefully this guy does better than Georgson. Last season we were awful both defensively and offensively when it came to set pieces.

We were good defensively, to be fair.

Gave you thumbs down, just in case! Be nice. Stay strong and take vaccine! 😀

We were pretty defensively from set-pieces. Especially when you consider our reputation under late-Wenger and how we were downright abysmal under Emery/early Arteta at defending set-pieces. In 2019-20 for example we conceded 46% of our goals from set-pieces. In 2020-21, we’re second behind City at 13% of conceded from set-pieces, I believe. Seems like Holding was the lynchpin of our set-piece routine. Which was great when we needed to clear the ball but terrible when we were attacking. Holding just couldn’t hit a barn door last season. From memory, I think our set-piece goals include; two free-kicks from Xhaka and… Read more »

We recently got rid of Mustafi, too.

Which is a bit like setting out to improve the state of your lungs and cutting out your 100 cigarettes a day habit.

That corner set up where several players would surrounded the opposition GK only to then send an outswinging corner to the penalty spot to absolutely no one… I much prefer inswinging corners to outswingers overall, both in terms of getting goals and preventing counter attacks, but that routine made no sense whatsoever

And we used to take so bloody long over them! They were more an opportunity for the opposition to get a breather and launch their own counter attack than any kind of attacking opportunity for us

But statistically we were good defensively I guess

One thing you all should note is that we have awful set piece takers. I remember seeing Southampton crowd the goalkeeper like that against Man Utd, and Prowse was able to put in a pinpoint cross into that mass of players.

We hardly have anyone capanle of doing that.

That should be taken into consideration, too.

Pepe is the best shooter of the ball in the squad. He has the ability to pick where exactly he wants to put it with good success rate. Should absolutely be our number 1 set piece taker. Corners, free kicks; should be Pepe on the ball. Got no idea why Mikel or anyone on his staff can’t see the obvious. Frustrating.

I think we were the only team in the Prem not to concede directly from a free kick (I think I read that late in the season, so it’s possible we conceded in one of the last games, though I don’t remember any.)

Teta's cult of personality
Reply to  A Different George

I think the Benteke goal at Palace is definitely one.

“Arsenal have conceded just six goals from set pieces this season – the fewest in the Premier League.

They account for 19% of the goals conceded – the lowest proportion of any top flight team.” On April 2nd

It looks like Nuno Tavares and Albert Lokonga will be Gunners very soon. Nuno has already completed his medical I believe. I’m sure Arseblog are just waiting for an official announcement.

Just quickly checked the stats on set-pieces in the league last season; we had the best defensive record in the league from goals conceded from set pieces (5), but also the joint fourth worst for goals scored (6).

I’m jover the moon with that!!!

Be careful not to get too jover-excited.

By Jover, you guys are on to something… I’ll follow you out the door.

This may be wishful thinking, but it seems to me that Guardiola would have insisted on exactly who he thought was best for this role, and that City would have paid what ever was necessary to get him for Pep. So, probably a pretty good choice for us.

A shame he can’t raid City for Sterling. Or Ilkay Gundogan.

What an absolutely ridiculous statement. Have you been watching the Euros?

A Different George
Reply to  Qwaliteee

I wouldn’t mind Ruben Dias either. Or that Kevin guy.