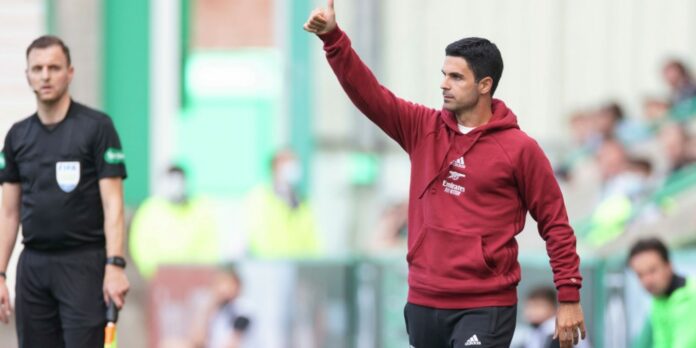 Mikel Arteta admitted his players looked leggy as Arsenal went down 2-1 to Hibernian in their first match of pre-season.

Martin Boyle put the home side ahead when debutant keeper Arthur Okonkwo made a hash of clearing a back pass midway through the first half. Daniel Mackay doubled the lead with 21 minutes remaining although there was more than a hint of offside as he headed home from on the goal line.

The Gunners were lively in attack and squandered a number of good opportunities, including a Nicolas Pepe penalty that was saved, before Emile Smith Rowe grabbed what proved to be a late consolation.

Reflecting on the outing, Mikel Arteta told Arsenal.com: “I’m always disappointed when we lose a football match but it is the first game, we played with many kids and we only had four training sessions.

“We’ve trained really hard and you could see that the players were a little bit leggy.

“I think we conceded the first goal, an accident, and the second goal was clearly offside. We created many, many chances but we didn’t score. That’s what pre-season is for, to take the things that we haven’t done well into a training session and then improve.”

On whether a lack of training explains the performance, he added: “It does but there’s no excuse because we want to come here and win the match.

In addition to keeper Okonkwo, the likes of Omar Rekik, Omari Hutchinson, Jack Henry-Francis and Harry Clarke were also given debuts.

The Gunners will spend the next three days training at their Edinburgh base before taking on Rangers at Ibrox on Saturday.

Dear Arthur, We love you We need to say more because you’ve only just been promoted to the first team so many won’t know who you are. In order to properly condescend and patronize you then people should at least know who you are. You’re our 3rd choice goalkeeper, that’s who, and don’t forget it. We don’t really love you, but look forward to maybe loving you? Or at least as long as you perform well we will love you to bits. I’d say you’ll overcome this but what’s there to overcome? It was a poor pass from Cedric (god… Read more »

I might be wrong but I got the impression it was a micky-take and skit on the we love you Saka article?

Anyone getting overly stressed about this needs to have a re-think.

Hope we can find some new homes for our unwanted players we had out there today! Also, if anyone knows when Azeez joins the squad I’m curious.

Once a gunner
Reply to  Canadagoon

Where is my Azeez?

Maybe you should have a a rethink about why you are so confident. Hope to find new homes for players on over 100k that no one wants and that just got beat?
Where are you getting the confidence?

Don’t know about Azeez but it doesn’t look like Willock got a run or a place on the bench. Some reports of discussions with Newcastle. We’ll see if he gets a run against Rangers.

I am truly impressed by the growing crop of double-barrelled youth players. May I humbly suggest that, where U21s are missing a second surname, one is allocated from a long list of appropriate Wes Anderson movie characters

Referee was shocking all game, granted it’s a friendly, score line don’t mean much but still, our players were getting dragged back continuously with nothing but a talking too, and their second goal was as offside as you can get.. oh well.. ESR laca and pepe played brilliantly when introduced.

I missed the game. I was really hoping that as we lost 2-1 players like Casette and Pepper weren’t involved at all..

Also surely there is a better system
In regards to the awaiting approval for comments, it removes a chance of having conversations with other arseblog members

It is shit I agree.
Please decline this comment but consider how annoying this is

I appreciate this, and the issue is that some people – like yourself – seem to get caught up inadvertently. To put it in context, we have a moderation list of over 1500 usernames, emails and IP addresses which help weed out most of the nastiest stuff people try to post. It won’t surprise anyone that there were attempts to racially abuse Bukayo Saka in the comments awaiting moderation after Sunday night. I am sorry that good people have to ‘suffer’ a little, but we try and moderate comments as quickly as possible, and in the end it’s our responsibility… Read more »

It actually is surprising because I thought we had a half decent community here.

It looks that way, becouse good people of arseblog moderate all the crap out of it. At least most of it 🙂 there is no problem to wait a bit, but then read some decent banter and disscusions 🙂

We do have a decent community, but there are a lot of drive-by idiots out there so it takes ongoing management to stay on top of it.

I’ve been doing this for a long time now, but some of the Saka stuff at the weekend was genuinely shocking – and there’s not much I haven’t seen before.

The Beast
Reply to  arseblog

Shocking but sadly not entirely surprising.

Thanks for keeping the site a relatively civil & pleasant one, free from hate speech

When you see sensible comments in support of the team downvoted, you realise that other club trolls can also get in.

Keep up the good work.

Wow that’s unfortunate to read. Hopefully you guys won’t need to moderate as much in the future.

Wow. Shocking, to say the least…

Yeah I could imagine the amount of trolls that come out the woodwork.. maybe a system where one strike and you are placed on the moderation list perhaps?
One of the better things about YouTube is the comments section say under a joe rogan video, where you have a fruitful discussion/debate with another YouTube member.

Honestly, you can usually tell by somebody’s first comment if they’re going to be a problem. It’s much more effective to do it this way.

Also, if someone’s first comment is racist abuse, I don’t want it on the site for any amount of time.

Yea I understand I’ve been a fan of this site since 2011 , time went so fast.. really enjoy your work.

Barely squeezed himself into the shirt, by the look of it.

Watching all those Euro and Copa America matches make me leggy too.

Lists out half a dozen excuses and then says there can’t be any excuses.

The Beast
Reply to  ashish mann

Why would anyone need an excuse for losing a preseason friendly in the first place?

I loved the Fotmob headline reporting the game:

Let’s get sensational about meaningless first warm up game using kids and reserves and players on their way out, why not?!! Get the pressure on the team and Arteta early and look to ramp it up from there!

The overwhelming majority of the problems from yesterday can be dismissed by one word, “pre-season”. However, the one problem they cannot be excused is the one that happened off the field. How, after last season’s fiasco with Saliba and Rekik, can Arsenal fumble Tavares’ paperwork to the point that it wasn’t ready in time for the match? It makes me worry that, behind the scenes, Arsenal administration remains the picture of incompetence…

Was it really a fumble, or is a few days just how long it takes to process the paperwork with all of the applicable organizations? A lot of hoops to jump through before any new import is cleared.

Yes, possibly. But how long have they been working on the deal—and with the start of preseason friendlies firmly in their sites…

The Beast
Reply to  karl

Just a lack of match fitness I think. Luckily, that’s what preseasons are for.