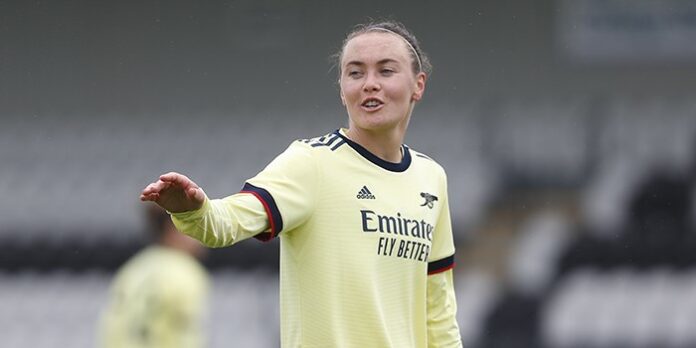 All nine of Arsenal’s Olympians were in action on match day four at Tokyo2020 as the women’s football tournament entered the quarter-final stage. Here is a round-up of how they all got on.

Team GB 3 – Australia 4 (AET) (Kashima)
Leah Williamson and Kim Little started for Team GB, while Steph Catley and Caitlin Foord started for Australia in Kashima. Lydia Williams was on the bench for the Matildas while Nikita Parris came on in the second half for Team GB. Ellen White’s hat-trick couldn’t stop Team GB from bowing out of the tournament as a brace from Sam Kerr and goals from Mary Fowler and Alana Kennedy put the Matildas through to the semi-finals, where they will play Sweden on Monday.

Sweden 3 – 1 Japan (Saitama)
Mana Iwabuchi started for hosts Japan against Sweden but was powerless to prevent the Swedes from progressing to the semi-final. Magdalena Eriksson gave Sweden an early lead before Tanaka’s equaliser. Second half goals from Stina Blackstenius and Kosavore Asllani gave Sweden the victory. Iwabuchi joins Williamson, Wubben-Moy, Parris and Little in exiting the tournament.

Netherlands 2 – 2 USA AET (Yokohama)
USA win 4-2 on penalties.
Vivianne Miedema scored twice for Netherlands against USA, giving them an early first half lead, which was traversed by goals from Sam Mewis and Lynn Williams, before Miedema equalised in the second half. Unfortunately, Miedema was one of two Dutch players to miss in the subsequent shootout, with Lieke Martens also having a spot kick saved during the match. Miedema leaves the tournament with ten goals scored, the record for goals scored in a single Olympic tournament prior to this was six. This match was also Miedema’s 100th cap for her country.

WHAT A GOAL FROM MIEDEMA! pic.twitter.com/gYzu1HAnJz

This means Arsenal’s Australians are the last players standing at Tokyo 2020. It is not yet clear whether the others will be available for Arsenal’s Champions League qualifiers in Moscow on August 18th and 21st but Arseblog News plans to ask coach Jonas Eidevall on Sunday.

Can we have our players back now, please?
Honestly, sat through the GB vs Oz game and no doubt Steph Houghton has had it at international level. I can understand Alanah Kennedy having height advantage but how does Sam Kerr outjump anyone to score with her head???
Steph has been a stalwart for many years but time moves on, I’m afraid.
Lauren Hemp was the high point of the game but then she got substituted anyway!
I just hope Kim’s head is ok and the huge bandage was just a precaution to stop the bleeding.

I honestly think Steph has had it for a while now, I am hopeful that City haven’t seen that but signing Dahlkemper suggests they have.

And yet Dalhkemper has not been good in this tourney. Amazed that Australia won today. They played reasonably well but were all but beaten until GB conceded late. Then GB dominates in first OT, gets thwarted by two excellent saves–and Australia scores late in the first OT on a crazy deflection. GB, Brazil and The Netherlands–all lost matches they could have and should have won.

Viv is just unbelievable. Saying she is the best in the world feels like still underrating her. I just hope if we have only one more year of her, we will make most of it. TeamGB/England are really their own worst enemy. The irony of Leah trying to play left-footed crosses into the box while chasing game, same time Alex Greenwood is sitting in front of Tv at home. Absolute instanity. Leah/Millie should have been Englands/TeamGB’s first choice CB partnership from 2019, but nope. This was perfect game for Tim’s “experience is overrated” mantra. Leah, Hemp (with White) were GB’s… Read more »

At least it saves us experimenting with Leah at left back or left wing! Complete madness! It just reiterates what we thought of the FA decision to employ Riise before the first match.

I don’t think Millie’s an international-level CB any more either. She was nowhere for Sam Kerr’s equaliser, and was so slow trying to get back when Canada broke on the left before sending in the cross for their goal. Leah wasn’t great for Alana Kennedy’s goal, but Demi and Steph weren’t either. Do other people find Jonathan Pearce an unpleasantly judgemental commentator, really up himself?

I wish they would replace JP but even more so Sue Smith. The pair of them are incessantly pronouncing what great players are in the team when in reality there were only 4 or 5 who should have been there. I thought that their observation that the Aussies were tiring because 5 of their players were over 28 followed by the statement that hattrick scoring Ellen White is 32 was right out of the Murray Walker pricless gaff book! As I said before the tournament the squad selection was brainless so with a new coach and some luck we might… Read more »

Team GB absolutely should have won & should have scored more but when Kim was (quite deliberately) injured GB’s heads seems to drop knowing their key midfielder & best player along with Lauren, was out of the game. Caroline had a fabulous tournament but Kim of course would have converted the penalty and in style. Hadn’t noticed before but Steph was certainly out of touch yesterday. Leah and Millie should have been the central defence, which would have prevented the 1st goal. I would like to point out that Keira had a great Games too, which was unexpected by many.… Read more »