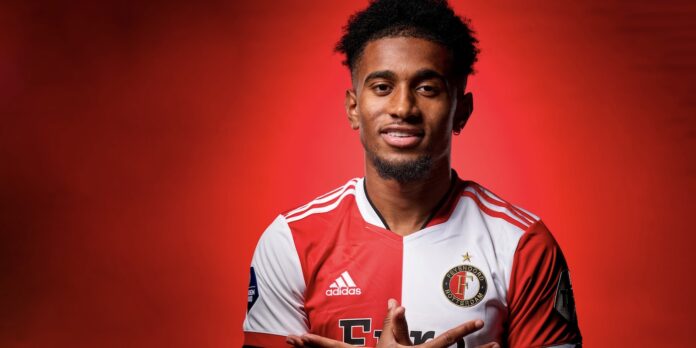 Feyenoord have confirmed the signing of Reiss Nelson on a season-long loan deal.

The Dutch club made a late enquiry for the England under-21 international when a deal to sign Manchester United’s Amad Diallo collapsed and things have moved very quickly in the last 24 hours.

While Reiss may not have been Feyenoord’s first choice signing, you wouldn’t know it judging by the comments of sporting director Frank Arnesen.

“We’ve been following Reiss for months,” he said. “Getting him to Feyenoord was one of our priorities in this transfer window, so we are very happy that it worked out and that we can welcome him today.

“Reiss is a very creative attacker, a fast boy with good action who can make it very difficult for defenders in one-on-one. We can use such a player in our attack.”

The Gunners wanted Nelson, 21, to go out on loan last season but he opted to stay at the Emirates to fight for his place. In the end, he made only nine appearances and effectively lost a year at a vital stage of his career.

Having come through the academy to make his debut under Arsene Wenger, there were high hopes that Nelson would become a real star at the Emirates. Unfortunately, despite showing flashes of his talent – predominantly in the Bundesliga during a year with Hoffenheim – he’s struggled for consistency in senior football.

It’s no secret that the winger is surplus to requirements at the Emirates but he’s agreed to a one-year contract extension that keeps him on our books through until 2023. The hope is that he plays well this season and generates more interest next summer.

A gifted footballer, Nelson will no doubt be looking at close pal Joe Willock’s six-month spell at Newcastle as an example of how quickly fortunes can change.

Best of luck to Reiss in Rotterdam.

Good luck to him. Hopefully this will do his confidence a load of good and he’ll come back a much better player

Needs to hit the gym hard. His skill is fine, his athletic ability is lacking.

I think it’s a bit more than that. He’d certainly benefit from a physical boost to help in our physical league. But I feel like he needs to learn to be more proactive and impose himself on games more. He has the ability and if he can get that elite mentality, of taking it upon himself in key moments to be decisive, then he will flourish. That will come hopefully come with game time and experience, so let’s hope he uses his time at Feyenoord effectively!

He is our player who has more confidence problems than any other player in the squad. I heard he was the golden boy in the academy. Should have learned how to be confident from Guendouzi when he was here.

Its very hard to build any sort of confidence when you’re not playing games. You can train as much as you want, and play as many PL2 games as you want, but nothing gets you firing on all cylinders like consistent appearances in the first team in the Premier League. And to be honest I feel for him, those minutes wasted on Willian should’ve been his. The output would’ve been exactly the same, I’d even argue that Nelson has a much higher ceiling. So it made sense to actually back him with the most minutes we could when he was… Read more »

Hope he has a brilliant loan and gets his career back on track, RvP sure to help him out, I think this is a good move for him.

He’s going to a big club that’s going to be looking to compete in every game.

We must be looking to sell him next year, because I don’t see how that experience will translate to Mikel Arteta’s Arsenal.

A lot can happen in a year, could be a different player. We could well have a different manager who will play him. Playing well on loan doesn’t seem to interest arteta, a lot of clubs would have been delighted to have willock saliba mavropanos returning after getting playing time and doing well at different clubs, playing different tactics, showing an ability to adapt. We have people making excuses for more experienced players saying they need time to adapt. All 3 of them had no problem hitting the ground running right away.

Hopefully MA gets the sack.

I genuinely have no idea why there was so little interest in him. Were it not for soon-to-be world class Saka, Reiss would have been given a real go in our first team.

Baffling. But good luck to him. I think he could have an amazing loan spell and come back to fight for his place.

Best of luck Reiss. He’s one of us!

SarcasmB0T
Reply to  Azeez Is Good

There was another “player” blocking his path, he’s no longer part of our club.

Tells you all you need to know about our “manager’s” dedication to player development.

By putting manager in quotes are you implying that Arteta isn’t actually our manager, or that he isn’t a manager at all?

Gabigol
Reply to  Azeez Is Good

I think it is simply clubs relying on data more and of that data they look at pure goal related outcomes. Reiss isn’t known for his build up play and his goal related Contributions are not consistent.

Gotta respect the lad for accepting European challenges, where so many English lads are too scared to give it a crack. Considering the success many have had (ESR, Bellingham, Sancho, Dier[puke!], et al.,), it’s a wonder why more don’t try. A bit of culture and different experiences does wonders for peoples views on the world.

Really wanted to see him play last year, and I am glad he gets a chance at Eredivisie. Feyenoord is a good team, playing in ECL, so I hope he makes up on development and contributes to Arsenal next season.

Excellent move for him, he’ll do well in Holland. Let’s hope he can come back ready to challenge for the 1st team, cos he has all the attributes to be a very good footballer.

All the luck Reiss.
I think Dutch football will suit him perfectly. It’s not as intense as the EPL, and most teams come out to play rather than “pack the bus.”

Is he making a hand butterfly in that photo. Cute!

Funny. Looks a bit like the double headed eagle gesture that got Shaqiri in a bit of trouble.

Xhaka’s been teaching him some tricks?

Best of luck Nelson. A player I really like, and Feyenoord are a good team with a great stadium and fanbase. I hope he comes back to Arsenal with more of a chance.

No news whatsoever of Kolasinac.

I wish Reiss the best on loan at Feyenoord. The Eredivisie is a league that heavily favours attackers but hopefully it helps him reignite his creative spark. The article doesn’t mention that whilst he opted to stay during the Summer 2020 window, he was very much open to going on loan in the January 2021 window.

The club couldn’t finalise a winter loan for Reiss because of disagreements regarding loan fees and wage arrangements.

In the Transfer Deadline Blog post, who is the tall bearded thin guy in the picture of the article??

Could be Josh Kroenke

That is Josh. Didn’t know he had a beard so it must be part of the disguise he is going to have to wear if he turns up at any home matches this season…

I wish him well, the lad deserves a fresh start.

All the best on your loan move, Reiss. Hope your career can kick on from there.

I like Nelson, glad he’s found himself somewhere he’ll play consistently, 🤞 he stays fit, and has a good season

Hopefully we find late moves for Nketiah + Balogun, there’s absolutely no value in either hanging around

35 – 40 games in the Championship is better than sitting in the stands for the season, Lacazette is likely leaving next summer, and if either does really well, then the No9 will be up for grabs

He got out. Good on him!

Stupid comment. We should be keeping / have kept him, AMN and Willock in the first team squad. All 3 would’ve made a positive impact in the horror show that was the city game.

I’m a fan of his since watching him play as a 15yr old. Was excited to see him debut under Arsene. If he can come close to replicating his form and confidence in the youth team, we have a real exciting player. Just needs a good run of form and his confidence back in taking on players. Good luck in the Eredivisie!

Great move for all parties. Hope he gets run of games injury free, shines and returns full of confidence

A lot can change in football quickly. Opportunity back at Arsenal May then open up and he grabs it.

He has all the tools to be an elite player, but needs to find that oumph that an attacking player needs. Eredevisie is probably the perfect place to gain some confidence. Good luck to him!

Have any of our players has effective loan spells in Holland?