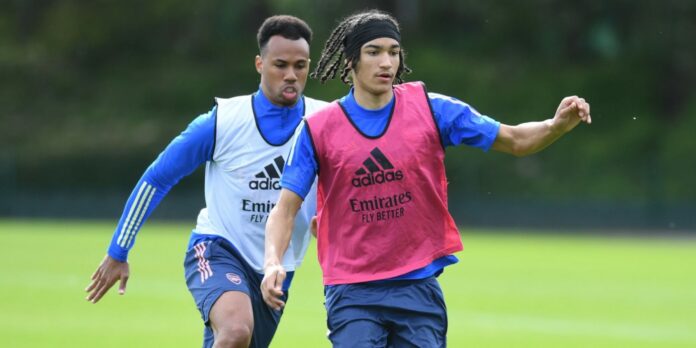 Arsenal have secured the future of 18-year-old winger Kido Taylor-Hart after the winger signed his first professional contract with the club.

On the books since he was seven, the technically-gifted left-sided player was a regular at under-23 level last season scoring four goals in 13 appearances. He also trained with the first team on a couple of occasions.

Speaking about his new deal, Kido said: “It’s a good feeling! I’ve been at the club for a long time, so I’m proud. It’s a proud moment for me.

“I support this club so obviously I want to play for the club and spend as much time here as possible and hopefully progress into the first team!”

Tipped to follow in Bukayo Saka’s footsteps it’ll be interesting to see whether Taylor-Hart gets the chance to make a senior debut this season.

Given our lack of European football, senior football could be hard to come by but a solid start with the under-23s could tee him up for a loan spell elsewhere at the turn of the year.

Taylor-Hart continues to impress for U23s

Taylor-Hart looks to push on after resolving future

The double-barrelled name quota us going to his us hard when it is implemented. Hard-hitting

My spelling, Christ sake.
Is going to hit us hard

Maybe somebody ought to pedantically correct you

60 years of having a double barrelled name and having the piss taken…. and finally I am down with the kids 🙂

Slowly but assuredly, Edu, Arteta and Per are managing to get some of the younger players tied down to new contracts. Following on from Balogun, (not inc. the younger first teamers) this is a great piece of business. Hopefully get a chance to see Kido progress over the next few years. Does give thought to the idea of the project and what they have been saying to the younger players about their pathway to the first team. Lokonga mentioned in his interview how he was pleased to be joining young players while bigging up the academy. That and the age… Read more »

Great news. Looking to see how he develops this season. Looks to be a very promising player.

Also keeping tabs on the development of Cirjan, Patino, Hutchinson, and Norton-Curry this season.

Amazing work from our academy.