THE LOWDOWN
Arsenal face Kazakhstani champions Okzhetpes in Moscow’s Saipan Stadium on Wednesday morning in their first Champions League qualifier. The Gunners are negotiating the ‘League Path’ which sees 59 teams split into mini-tournaments of four (and one of three). Jonas Eidevall’s side will play Okzhetpes on Wednesday morning.

The winners of the game will face the winners of PSV Eindhoven v Lokomotiv Moskva on Saturday in Moscow for a place in the playoff rounds- a two-legged qualifying game played home and away at the beginning of September to determine entry to the group stage. Even if Arsenal lose against Okzhetpes on Wednesday, they will face the losers of the PSV v Lokomotiv game, even though neither would be able to go any further in the qualifying rounds. The third-place games are played for coefficient purposes.

Arsenal ought to comfortably beat Okzhetpes, even if the team’s pre-season preparations have been impacted by the Olympics. Lotte Wubben-Moy, Leah Williamson, Steph Catley, Kim Little, Vivianne Miedema, Nikita Parris, Lydia Williams, Caitlin Foord and Mana Iwabuchi were all competing in Tokyo until a fortnight ago.

All but Leah Williamson are included in the squad that has travelled to Russia but it remains to be seen who will be considered fit to start. It’s a far from ideal situation but it does also mean that Arsenal ought to be well into their competitive groove by the time they face Chelsea at Emirates Stadium on the opening day of the season.

TEAM NEWS
The players that took part in the Olympics are all part of the squad that has travelled. Lisa Evans has joined West Ham United on loan for the season, while Jordan Nobbs misses out due to her ankle injury. Beth Mead is fit despite hobbling out of the recent Sp*rs friendly with an ankle knock. Lia Wälti is out of Wednesday’s game with a knock but could be fit for Saturday’s game against Lokomotiv Moskva or PSV Eindhoven. 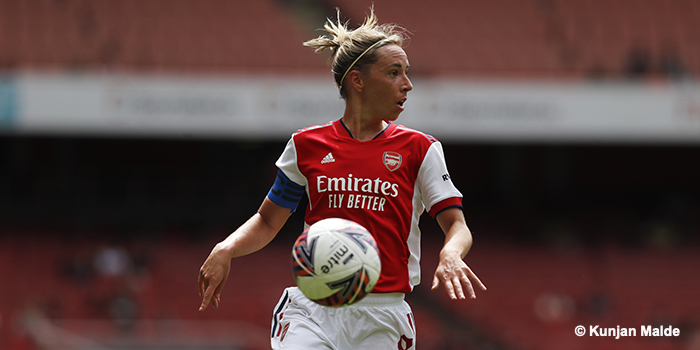 Jen Beattie is back in the squad but unlikely to start following back surgery in the summer and Viki Schnaderbeck is still recovering from knee surgery and Malin Gut will miss most of the season with an ACL injury. Fran Stenson is back after thumb surgery. Frida Maanum, Mana Iwabuchi, Simone Boye and Nikita Parris are all in line for their competitive debuts for the club.

Arsenal’s squad for the Champions League qualifiers has been named as follows:

A WORD FROM THE BOSS
“Jordan sprained her ankle in the Chelsea game and she is progressing very, very well, so everything is following to plan but she is not available to play in Moscow. Beth Mead was just taken off as a precaution and she is available to start these games in Russia.

“The artificial pitch isn’t an issue, we haven’t found any medical reason to do that (make that a consideration on player selection). The Australian players- Lydia Williams, Steph Catley and Caitlin Foord- have only been able to train with us fully twice, yesterday (Monday) and today (Tuesday). But they are included in the squad for tomorrow and they are available to play, they all look very good so I don’t have any concerns there.

“Of course at the moment we are focused on these two games but we are working behind the scenes as well to see if we can strengthen what it already a very strong squad. It could be that we make one or two more additions in this window but it all depends on whether it is the right player or not because it has to be good for us from a long-term perspective. But if we can’t, it is no problem, we have a very strong squad.”

LAST TIME OUT
The two teams have never met before. Okzhetpes have won their last six games in the Kazakh league, scoring 34 and conceding zero. However, they are currently third in the table, eight points behind leaders BIIK Kazygurt having played two games more. It seems unlikely they will be in the Champions League qualifiers again next year.

Arsenal, meanwhile, have warmed up for this game with a pair of pre-season victories over Chelsea at Emirates Stadium as well as a 4-0 victory over Sp*rs at the Tottenham Hotsp*r Stadium, though both of those were achieved without any of the players that went to the Olympic games.

THE OPPOSITION
*Crickets* I am not going to lie, I don’t have an awful lot of information about Okzhetpes and there isn’t exactly a rich seam of archive material online. I do know that their team is so-called because their name translates as “an arrow won’t reach.” It’s based on a story about Eighteenth century Kazakh ruler Ablai Khan, who could not decide which of his warriors to give a captive girl to and so allowed her to choose a husband for herself.

She climbed to the top of the highest cliff and said she would marry whoever hit her shawl with an arrow and nobody managed it. They had nine different names since they were founded in 1957 before settling on Okzhetpes in 2004. They were knocked out of last season’s Champions League in the first round by Georgian side Lanchkhuti, who went on to lose 17-0 to Rosengard on aggregate in the next round.

PLAYER TO WATCH
Nikita Parris is likely to make her Arsenal debut in this game. Keets will surely either play on one of the flanks or even possibly upfront if Jonas Eidevall is minded to rest Vivianne Mediema to the substitutes bench.

Parris is making her return to England after two years in Lyon where she won plenty of silverware but struggled to totally win the affection of the Lyon fans. This is a fresh start for Parris and at 27, she is coming into her prime years to play alongside the best striker in the world. It seems very well set up for her to show her best form and properly establish herself as a first-choice pick in England’s starting XI.

HOW TO CATCH THE GAME
The game is being streamed live by the hosts and I am told the chances are good that the stream will be made available for viewers outside Russia. Arsenal.com are currently negotiating being able to use the stream on Arsenal.com and ensuring the equipment in the stadium allows them to do so. Should get a full update on this later today. The game kicks off at 11am on Wednesday UK in Moscow’s Saipan Stadium.

COMING UP
We will have match reaction from coach Jonas Eidevall on the site shortly after full-time.

How do you pronounce their name?

Like the fact Jonas is still looking to strengthen the squad as we are still a bit light in midfield even when Jordan is back running.

Also like to read that his former team stuffed last season’s conquerors of tomorrow’s opponents 17-0!

We ought really to be approaching a double digit scoreline with the players we have sent there whether or not Viv is rested!

Go on Ladies and good luck. I have faith in you.

Will we be able to stream the game?

Not sure if a link will go through moderation quick enough, but basically open any youtube video and replace the last part with
v=oax7RuRhbO8