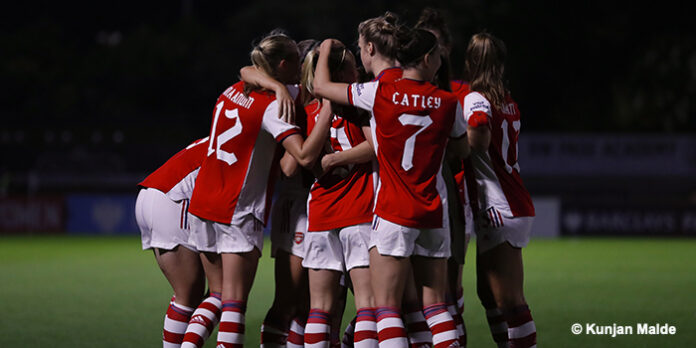 THE LOWDOWN
Arsenal play at home to Manchester City in the WSL on Sunday in a showdown between two teams who will be competing for the WSL title this season. The Gunners lost all three of their matches against City last season, all by two goals to one, but with a renewed energy in the team under new coach Jonas Eidevall and a home victory over Chelsea already this season, Arsenal will be in buoyant mood for this one.

Arsenal have won all six of their competitive games under Eidevall so far but they know they had a slight physical advantage in the opening match of the season against Chelsea, having started their season slightly early due to Champions League qualifiers. City’s injury situation has made the home side favourites for this game but they know that the visitors still pack plenty of quality into their squad.

Watch Arsenal players Rob Holding and Jordan Nobbs go head-to-head in the first episode of Lies of the 2021/22 season! 👀

The visitors were eliminated from the Champions League at the qualifying stage by Real Madrid and, shortly before the international break, fell to a shock defeat at home to Spurs. They are at a low ebb with plenty of injuries but there is simply no such thing as an easy game against City. Arsenal will want to continue their good start to the season but they have lost to the visitors enough times in the recent past to be wary.

Like most games between the big three of Arsenal, Chelsea and City, the game will likely be decided by small details. Arsenal have the fillip of something approaching a full bill of health with only Simone Boye definitely ruled out through injury. This is another early examination of Arsenal’s title credentials at Meadow Park.

TEAM NEWS
Arsenal will have Noelle Maritz and Caitlin Foord available after both players did not feature for their countries during the recent international period. Frida Maanum has also been passed fit despite suffering a blow to the ribs playing for Norway on Tuesday evening. Jordan Nobbs returns to the squad after six weeks out with an ankle injury and Viki Schnaderbeck could also make the squad for the first time since injuring her knee last November.

Simone Boye Sorensen (knee) and Malin Gut (ACL) are the only players that will definitely miss out in this game, Tobin Heath will also be available for the first time having arrived in England on Friday and took place in her first training session on Saturday. Jonas Eidevall told Arseblog News on Friday of the returning players, “maybe they are not all available to start but they should be available.”

A WORD FROM THE BOSS
“The international period is not really a break for the coaches either, we try to work with the development of the players who stay with us but also the players that are away. Within the technical staff, we divide up specific national teams to watch to see the games through the eyes of our individual players.

“For example, I watch the Netherlands and now we only have one Dutch player, I can just watch from Viv’s perspective. It’s really beneficial because it helps us to learn about their environment in the national team and their roles there, what the differences are between their roles at club level. We look at whether there are things we can work with their national teams on that we could both benefit from.

“That’s one aspect. Of course, we are also reviewing what we (Arsenal) have done in the first few games. From a results perspective, great, from a performance perspective, still a lot of work to do. We’ve had great moments in games but to better we need to be more consistent in games and we need to be better collectively. It’s normal that that takes some time. We are not getting carried away, we are looking at it in a humble way and we know we a lot more work needs to be done.”

LAST TIME OUT
When the teams met in February, Manchester City ran out 2-1 winners. Ellen White opened the scoring in the first half, Caitlin Foord bagged a second half equaliser only for Lauren Hemp to head home a late winner.

THE OPPOSITION
Manchester City have endured a rocky start to the season, having unexpectedly lost their Champions League qualifying match to Real Madrid, they suffered a shock defeat at home to Tottenham just before the international break as well. Gareth Taylor’s injury list is lengthy, even if Caroline Weir has been passed fit for this match.

Ellie Roebuck, Karen Bardsley, Lucy Bronze, Esme Morgan, Steph Houghton, Keira Walsh, Chloe Kelly and Hayley Raso are all out for this game with Alex Greenwood facing a late fitness test. It could mean a start for Arsenal academy graduate Ruby Mace, who left Arsenal for City this summer, at centre-half.

There ought to be questions about City’s spend to success ratio, having only won one WSL title and with serial underperformance in Europe. However, they remain an excellent team with an excellent squad and Arsenal haven’t beaten them in nearly two years. Even with their injuries, they will still field a team full of top-class international players come Sunday.

PLAYER TO WATCH
Noelle Maritz has been passed fit for this game and she will come up against Lauren Hemp, who is one of the best wide players in the WSL. Hemp has scored in her last three outings against Arsenal and with her ability to both take on her full-back and to attack the area for crosses from the right, she is City’s most dangerous player. 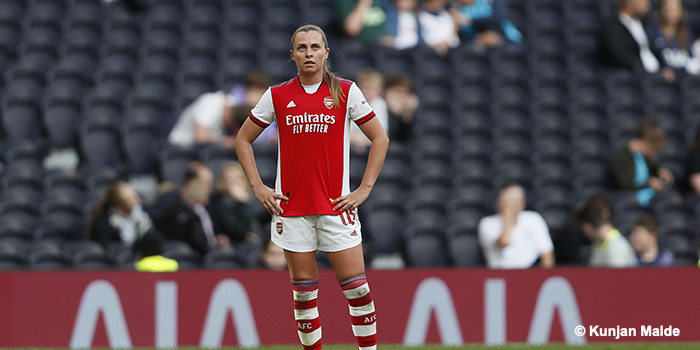 Maritz will be charged with keeping a watchful eye on Hemp. With Catley overlapping on the left, Noelle tends to play a slightly more conservative role on the right hand side in any case. She will face few stiffer tests than Lauren Hemp this season, if the Swiss right-back comes out on top in this battle, it is quite likely that Arsenal will too. 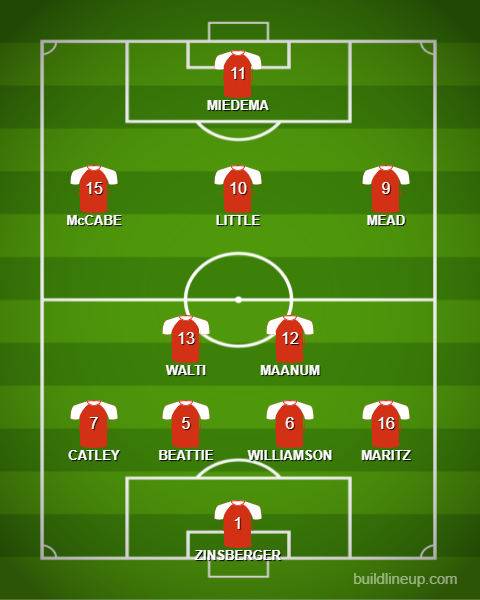 HOW TO CATCH THE GAME
The game kicks off at 6.45pm on Sunday at Meadow Park with tickets available on the gate at £12 adults and £6 concessions. The match will be screened live on Sky Sports straight after the North London Derby between the men’s teams on Sunday. This match is being broadcast all over the world, so check your local listings. If your national WSL broadcaster isn’t carrying it, you can watch it for free on the FA Player app free of charge.

COMING UP
We will have match reaction from Jonas Eidevall on the site on Sunday night, as well as all the usual build-up and reaction for Wednesday night’s FA Cup tie against Spurs. All things being equal we should have another Arsenal Women Arsecast for you next week too, featuring a very special guest.

Well if we have to play City now is a good time to do it!

Nice one Tim! Love these informative but succinct previews. Kind of wish we could have them for the men’s team too as well as all the more in-depth analysis which can be a bit daunting and overwhelming at times. Less is occasionally more.

Lauren Hemp is a bloody good player. Watched her at the Olympics. Hope she has an off day tomorrow, though.

Can’t remember the last time we had a starting eleven + full bench of fit senior players. I I’m feeling it, I think we can bag those three points and keep amazing streak going!

Only Arsenal Women can bring the UWCL back to England. #COYG

Huge game. Chelsea was big because it’s the one we can’t beat. Finally we did it. We got through. If we win this one, it’s not like we had one good game. We are no longer the one without massive signings and the one who always come short in the big games. If we win tonight, we’ll be top of the table halfway through and everything to win 2nd half of the season.

I just love the honesty and straightforwardness of Jonas. One can clearly see that what he says and what plays out are in sync…… That’s refreshing

Is it Tobin Heath on the next Arsecast?

Can’t help being nervous. Man City will be very dangerous because they are always hard to score against and they break really efficiently. I love your suggested team and isn’t it exciting that we would have so much attacking strength on the bench?

Get well soon, Simone – looking forward to seeing more of you. Also sympathy to poor Malin – such a badly timed ACL injury.