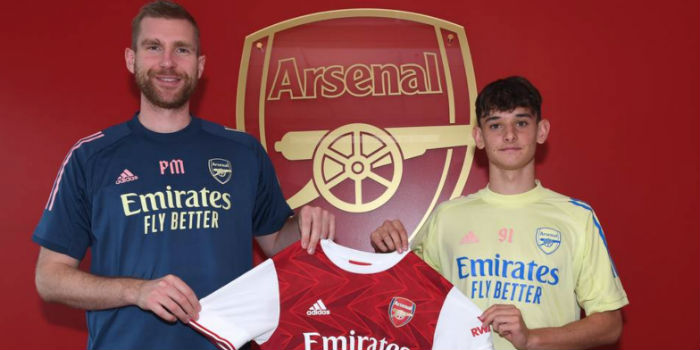 Arsenal have produced some talented prospects in recent years and there has long been a feeling that the club’s crop of players who signed scholarship terms in 2020 contains several individuals who could eventually make the step up to the first-team squad.

Charlie Patino is the most prominent player from that group, with the midfielder, who has an excellent passing range, in contention to make his competitive debut for the first-team against AFC Wimbledon tonight.

There are also high hopes for Omari Hutchinson, with the winger having adapted seamlessly to playing for the U23s after excelling for the U18s last season.

Then there is Marcelo Flores, who is eligible to represent Mexico or Canada, with the creative prospect having been in fine form for the U18s.

Brooke Norton-Cuffy, meanwhile, had started the season well at right wing-back for the U23s before injury stopped him in his tracks.

Zane Monlouis possesses plenty of experience of playing for the U23s despite being just 17 years old and striker Khayon Edwards has excelled for the U18s.

Jack Henry-Francis was involved with the first-team in pre-season and relishes dictating play with his passes.

Charles Sagoe Jr, a creative midfielder, found playing time difficult to come by for the U18s last season but has really stepped up this campaign.

There are plenty of other prospects too, including goalkeeper Remy Mitchell, defenders Taylor Foran, Zach Awe and Henry Jeffcott in addition to midfielders such as James Sweet, Mauro Bandeira and Luigi Gaspar and forward Billy Vigar.

Given the amount of players in this group, it is clear that not all of them will be able to succeed at Arsenal but there is a good chance that one or two of them at least could eventually break into the first-team squad.

All of the players in this group are aged between 17 and 18, so they will need to be given time to develop, but it is certainly a very exciting crop.

I’m going tonight, so am hoping to see some fresh prospects thrown into the mix. Another cheeky goal like the one everyone’s now seen on you tube please Mr Patino!

Hope he gets a run out tonight

Isn’t Kido Taylor-Hart supposed to be one of our next breakout players?

Senior to the batch Jeorge is writing about maybe?

Loving these Arsenal youth names. Billy Vigar and Zach Awe…
Hoping they make it to the first team just to see those on the back of a shirt

Vigar 14 sounds like a planet in a sci-fi show!

Or a kid in The Beano or Vizz

I read he debuted on the weekend and played an hour.

There was a slight write up in the match player ratings on Azeez:
“Handed a full debut after joining on loan from Arsenal, Miguel Azeez started in central midfield in place of Wales international Joe Morrell. Showed some moments of skill and keenness to get forward, but did not offer a lot defensively. More forward thinking than some of his midfield colleagues, seeing a couple of shots from distance blocked. Taken off just before the hour mark. 6“

@Jeorge, what happened with George Lewis? Is he injured?

Yes he has a long-term injury.

Many of them have outstanding names too.

With rare exceptions (e.g. Wright, Bergkamp), I’ve always been more far, far more excited by young players coming through than with new signings. Showing my age but the first dribbling run from Rocastle, when he beat several “adult” players had the whole of Highbury buzzing – it was a collective, sitting up straight/”f*cking hell” moment. Much more emotional and memorable than any deadline day signing. Back in the day the anticipation was built by reading the stats and scores in the programme for Youth & Reserves and seeing the likes of Merson scoring multiple times against Tottenham and Kevin Campbell… Read more »

Really want Zach Awe to make it. His name is made for headlines and songs

The amount of talent currently coming through is easy to explain The best thing for inflation, is usually more inflation, as elite talent becomes more valuable, transfer fees, wages, and agent fees, will rise The market will then naturally produce more of what’s valuable in higher quantities, in order to feed the demand, and make up the shortfall Once top talent becomes more abundant, transfer fees, wages, and agent fees, will naturally balance out Get ready for a production line of talent across the country, at a level never seen before, over the next 5-15 years The more top talent… Read more »

I hope Charles Sagoe Jr makes it, but if not he can look forward to a promising career as a mid-20th century American business magnate.

Charlie Patino is perfect for us, we need midfielders like that in this team, none of these elnenys and xhakas.

Patino will get his chance and I hope for next season he’ll have a first team contract. If you haven’t set watched him play, then you’ll find out just how good he is tonight if given the opportunity.

H never puts a foot wrong, can escape out of any press and makes the right decision all the time. I see Wilshere and Cazorla in him.

And he never lies, helps old ladies cross the street, is first to arrive and last to leave all training sessions, tracks back, and has pledged never to play for Jose Mourinho, ever. Also never leaves out the “The” when referring to The Arsenal.

Er, how good is Luigi Gaspar? What position does he play? And is he by chance related to our dear Edu? 😶

More importantly is he related to Villarreal right-back Mario Gaspar?

He is Edu’s son

Behind Patino and Hutchinson, Norton-Cuffy and Flores seem to be progressing really well.

I think a move to central defense is possible for Norton-Cuffy. His defensive ability, size, and ability on the ball are all qualities that could justify the switch. High hopes for Monlouis as well.

Though they cannot all make it at Arsenal, hope they make the most of the training at Hale End and all have top-flight careers.

Beat Cheski 6-1, sweet pass from Patino to Balogun for one of the goals. Future looking bright!

Here’s wishing them all the best.Patino is something else- great prospect.