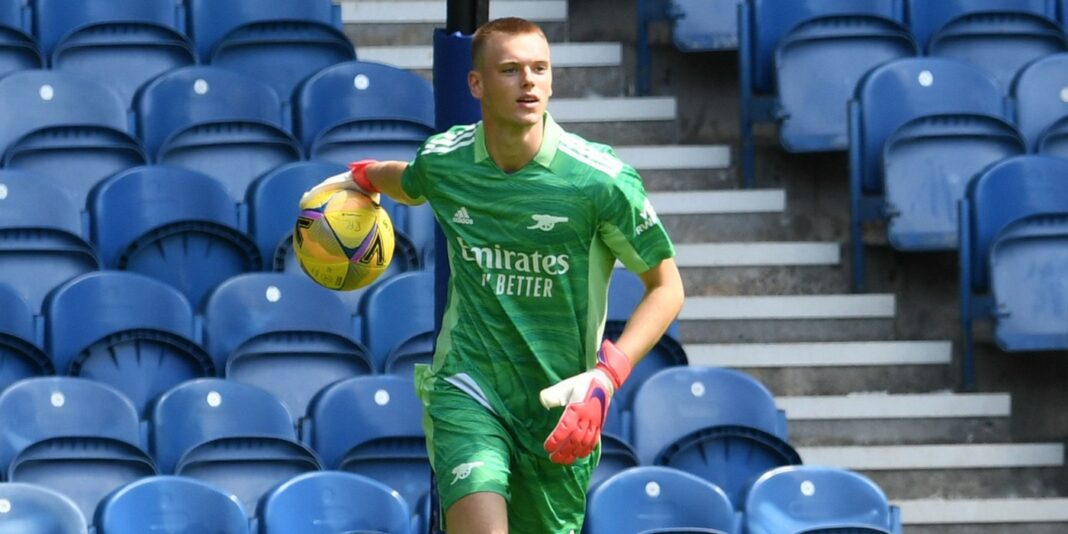 Arsenal have confirmed that young goalkeeper Karl Hein has signed a new contract.

The 19-year-old featured for the first team in pre-season and made the bench for the Premier League opener against Brentford when Alex Runarsson was ruled out with Covid.

Hein, whose contract was due to run out in the summer, has been a full international for Estonia for a while now and recently made headlines with a stellar performance against Gareth Bale’s Wales in Cardiff.

While a decision to extend his contract won’t have been made on that alone, it won’t have hurt his profile at the club.

Earlier this summer, fellow teenager Arthur Okonkwo got the nod over Hein for promotion to the first team; it’ll be interesting to see how that battle plays out and whether the club re-assess their decision.

“It means a lot to extend my contract with this big club, a big club in Europe, a massive club with traditions. I’m very happy, very happy,” he told Arsenal.com.

“It’s been a long process [at Arsenal]. First year I had quite a long-term injury with my wrist, it was a tough time but I think I went through it well. Next season was good, did well with the 23s and then step by step I got involved in the national team, got involved more with the first team and slowly but surely it’s been good progress.

“My ambitions are to play for Arsenal ultimately, train hard, keep the progress going and then hopefully get my chance.

“Step by step, every day I feel more comfortable and it’s been a good pre-season and I’m looking forward to this season.”

Hein is actually a product of the football academy set up in Estonia by ex-Gunner Mart Poom. The legendary Estonian keeper, who spent two years at the Emirates from 2005-07, even recommended he make the switch to Arsenal despite interest from other clubs.

Karl Hein refuses to give up in battle with Okonkwo

He already has 10 caps for Estonia, sure he’s their only GK who plays outside Estonia but still well done. It feels like he should be going out on loan, for example to League 1 like Szczesny did at 19 to Brentford.
Do you know if it came up for discussion to loan him out or if he might go in January?

The way he is progressing, he will be ahead of Arthur next season for sure.

He will have some Ketchup to do

One day he’s gonna be the Daddy.

Might already be, but they’re both awesome talents to have in the ranks. I assume Leno is gone next season, perhaps after a Jan loan, hein can come back as #2. He’s getting close to being ready already…

He’d definitely need a loan to show his worth then, because it’s a huge gap to go for #2. I can’t see him do it without a proper run of competitive games somewhere.

I’d even be more inclined to sign someone experienced on loan as our backup goalie next season, and send him (and/or Okonkwo) on loan somewhere for a whole season to see what they’re made of.

In all honesty, Arthur shouldn’t really be the name of an Arsenal player.

Arthur is the name of the unemployed loser married to Olive in ‘On The Buses.’

Thumbs up from me for the On the Buses reference.

That show was grim

This will be a good move in heinsight.

Surely we can call it Aaron ramsey’s Wales?

Jordan 23
Reply to  A Different George

If Giggs gets cancelled, can we erase those hairy chest memories from 1999?

Ramsey missed this match though..

Fc karl is back on, folks

Mart Poom – Arsenal legend, how many appearances? Lol probably as many as Guillaume Warmuz