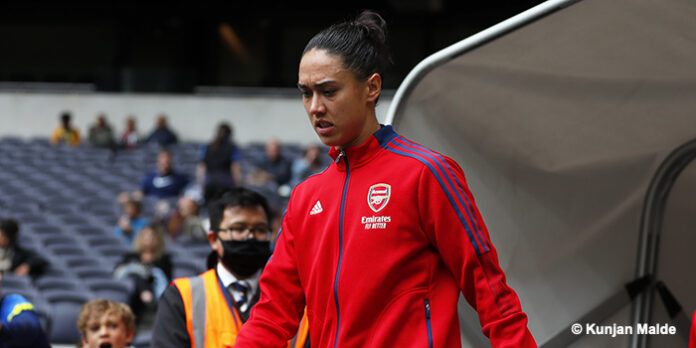 Over the last three seasons with Joe Montemurro in charge, Arsenal have rotated their goalkeepers on a game-by-game basis without having a clear number one choice. Last season, Manu Zinsberger and Lydia Williams shared goalkeeping duties relatively equally when fit. 25-year-old Zinsberger is Austria’s number one, while 33-year-old Williams has been Australia’s number one for over a decade now.

Ahead of Thursday night’s Champions League qualifying second leg clash with Slavia Praha at the Sinobo Stadium, Arseblog News asked Arsenal boss Jonas Eidevall whether he would continue his game-by-game rotation policy. “For me, if you are in a position like the goalkeeper, I think, firstly, it’s important not to feel like you will be rotated if you make a mistake because it’s a very vulnerable position.

“You need to feel confident when you are playing in that position. The two goalkeepers we have, in Manu and Lydia, are both quality goalkeepers but they also have different attributes that can come in handy in different games, so I understand why Joe had the idea to rotate them.

“In general, I am more minded to have a clear first choice goalkeeper but obviously it is a competition. We are playing a lot of games so there will be a good opportunity for both of them to play this season.” I also asked Jonas about the defensive midfield position. With Malin Gut injured, Lia Wälti is the only specialist option in defensive midfield.

Simone Boye, Leah Williamson and Viki Schnaderbeck are all centre-halves by trade but all have played the position and with six centre-halves in the squad, I ask whether one or more of that trio might be considered for the position as an understudy to and competition for Lia.

“I also think Frida Maanum has played well as a six,” Eidevall responded. “So we have different options to play there. I don’t have a definite back up in mind. I would also say it’s a competition and Lia Wälti won’t always necessarily be the first choice, like all the positions in the squad. We have a few alternatives that can play there.”

How do the keepers differ, Tim? I’ve only ever seen Zinsberger.

Tim Stillman
Reply to  Sam I Am

Joe used to rotate them based on what they do on the ball. So Zinsberger is much better with short passes and sweeper keeping. Lydia has a better long pass and is a better shot stopper. Lyds is more a traditional keeper, she doesn’t help to suppress shots like Manu but she’s better at dealing with them when they do arrive.

I agree with Jonas to a certain extent regarding goalkeepers. Bearing in mind they are not running around like headless chickens for 90+ minutes each game you cannot really convince me that they need to be rested. I also believe that Manu is a confidence player and confidence only comes with playing matches and keeping clean sheets (hopefully) so with a good run of matches behind her and we might just see the true level of what Manu is capable of. I guess with Lydia as back up this is why Fran was allowed out on loan so when Lydia’s… Read more »

Mental tiredness can be an issue and ironically being in a team that tends to dominate games can be worse.

However, knowing that your position is secure because of the reasons given is good.

Makes issues for the 2nd choice but maybe with the shorter contracts in WSL (thanks Tim) it’s less of a problem.

Any idea what is the length of contract for both Manu and Lydia respectively?

Thanks Tim. If we take this into consideration, I think having Manu as the first choice is more sensible.

This is a statement of fact by someone who has close ties with, and insider knowledge of the club, so unless one of the club’s senior managers considers this to be wrong and hasn’t told anyone why is it down voted?

Curious about the downvote, or was that Lydia?

I don’t wish to tempt fate but Manu was pretty faultless on Sunday, there was little she could do on either goal. She obviously has the technical ability to pass it around the back 4 but this was the first time I’ve seen her do it in a big game without looking nervy and putting others under pressure.

I think she has been good whole season and after quite awful beginning of the last season, she was quite solid in the second half. For me I still find her suspect on stoping long shots, but I hope that with confidence that part of her game also improves. I felt that this rotation of goalies what Joe did, prevented any one of them getting into a rythmn. I hope that run of games without needless rotation gives us the best chance to get maximum out of any goalie Jonas chooses to have his no 1.

We have both agreed in the past that Manu has had trouble moving her feet across the goalline to reach shots but that has improved of late. With the new coach bringing in fresh eyes hopefully giving her additional confidence through promoting her to the No1 spot there could be more improvement. It also helps considerably that the ball is moved forward away from the danger area more quickly too. So often in the past we put our own backline, and consequently goalkeeper, under unnecessary pressure through continuous passes around our own penalty area which made it easier for half… Read more »

It’s fantastic to see increased coverage and visibility of the women’s game in general and hence of the Arsenal Women as a result of it. Ofc Tim’s been doing his best for such a long time but it feels like the long overdue exposure and increase in profile as well as stature is here. Long may it continue. Hoping for quite a bit of rotation as we hold a good first leg advantage.

Yes, makes sense. While I agree with other posters that Zinsberger has improved and was excellent on Sunday, in an ideal world we would upgrade.

Agreed. Lydia’s contract is over next summer, I guess that gives Jonas chance to bring in his style of goalkeeper. I have been big proponent of young English duo MacIver and Hampton, but they both have been quite shaky lately. Jonas seems to be quite ruthless with his upgrades to the sqaud, I hope the same applies here.

Let’s see how Fran gets on at Brighton. She is supposed to be a contender for the England shirt and as you say there is some pretty decent youthful competition for that position already. We may already have the upgrade!
We also need to have a look at Hermione Cull. She must have something about her if she has been named in the CL squad, don’t you think?

I did not see the team often in the past, so had no preconceptions. Against Chelsea, I thought Zinsberger could have come put much more often to break up attempted crosses and prevent dangerous goal-mouth scrambles. (I agree that she was blameless on the goals.) After reading some of Jonas comments earlier–about forcing Chelsea to rely on crosses because he was confident the Arsenal defenders could deal with them–I think Zinsberger’s reluctance to step forward may have been on instruction. I hope she can command her area more forcefully against sides that aren’t as strong as Chelsea.

could have come out

Cull is better than both of them