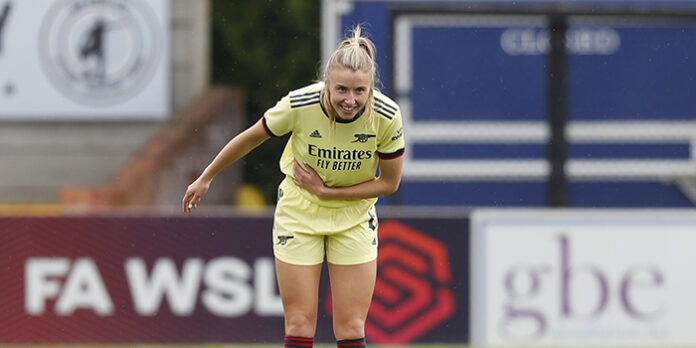 Leah has been made captain following the withdrawal of Steph Houghton from the squad due to injury. Earlier this week, new coach Sarina Weigman had said that Houghton would captain the team for this round of qualifiers before a permanent appointment would be decided on.

Your #Lionesses captain for tonight… 🤩

Weigman didn’t confirm that Williamson would skipper the side on Tuesday evening too. Sarina did say, ‘This is also an exciting opportunity for Leah Williamson to wear the captain’s armband at senior level for the first time and I look forward to seeing her in action.’

The future has arrived!
I don’t believe Steph Houghton should have been in the squad anymore
A good player once but women’s football has moved on
Good luck Leah!

Sarina knows that moving on from the likes of Steph Houghton, Jill Scott and Ellen White is going to have to happen under her charge. For Steph and Jill I think that time is coming more quickly than it will for Ellen White. There are other options there now and she can’t keep blocking Leah. Scott is slightly different I guess because England is so weak in midfield, White will be ok though I think Salmon and England know they are vying for her spot soon enough. New broom!

Agreed Tim. Much like at the Arsenal, a new coach in Sarina is an ideal time to have a reset and look at who is available and who is performing well. I think Ellen White might survive the first “cull” because she is still scoring goals but Beth England, as you say, is waiting for the nod. Ebony Salmon may get her chance sooner since I feel she is a different type of striker to White / England and could be used to change the point of attack. While we are talking midfield, Sarina could do worse than give Anna… Read more »

It just makes my heart break for Jordan, though. She should be involved – I’m sure Sarina Wiegman would know how to use her.

Congratulations, Leah – you will fulfil the role admirably. Good luck to all the Lionesses tonight, even the ones who play for Chelsea.

The future indeed has arrived 🙂
Leah is frankly the only candidate and fully deserves the honour.
She was the standout defender at the Olympics for Team GB where she was at times sensational & wanted the QF win versus Oz more than any other player.
Leah will carry the armband with the considerable pride she displays, and will wear it with distinction for many years to come.

What an honour for her country. Leah is my favourite player from the Women’s team. Good luck to her.

I’ve just watched highlights of the match. Five goals were gifts from the defence or goalkeeper, and one was a penalty for a foul outside the box! However, the seventh and eighth were really good and I thought the two Beths combined extremely well. We have to accept that one day Viv will leave us 🙁 but I was wondering, given her current lack of game time at Chelsea, whether Ms England would be a good acquisition.

I watched a re-run of the whole match and for the chances created England should have won by a record scoreline! Leah looked comfortable being the director of operations in the middle of the pitch but I wonder if she will be happy with that long term as she seemed to do more pointing and shouting than playing the ball. Bright and Greenwood had it easy in this match but against better opposition perhaps Leah and Lotte as centre backs might be a better idea. As for Beth England, a Viv replacement she ain’t but she does have quality and… Read more »

Not the first to say this (was probably Tim), but I wonder that if the Tobin Heath move is followed up by marque level recruits, whether Viv will make a commitment.

Particularly if US players are available, the cost outlay becomes relative according to merchandise and new support in a massive market.

If the club are serious about honours at the highest level Viv, Leah and Jordan need to be retained.

I like Beth England, she was busy and lively against us, but does she offer more than say Caitlin?

I think Viv will resign with Arsenal because I don’t see too many other big clubs where she would fit. Wolfsburg and ManU could really use her services, and Wolfsburg could conceivably offer her a lot of money, but Miedema has already played in Germany (for Bayern) and didn’t enjoy the team’s attacking philosophy–though I think a lot has changed at most every club since 2015. And ManU needs a star striker. I don’t see her going to France, unless Hegerberg is not resigned by Lyon. Actually, Barca might also be a possibility–can you imagine Miedema playing with that group?–but… Read more »

New manager at club and national levels and a new direction for Leah. Sarina and Jonas seem to positive plans for her development.
Only N Macedonia but Leah at the centre of a youthful midfield was an interesting tryout.