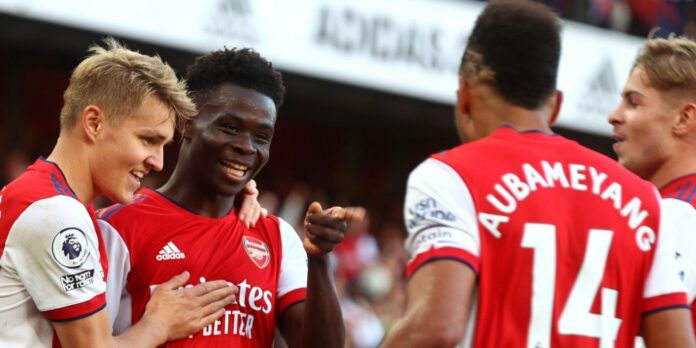 Saka was on the scoresheet and provided an assist for Emile Smith Rowe as the Gunners romped to the three points with a stylish first half performance at the Emirates.

After a difficult first month of the season, the third win in a row, played out in front of a packed and raucous Emirates crowd, has changed the mood around the club to the point where Saka feels confident enough not to put limits on his teammates’ potential.

“We can achieve anything, no matter what age,” said Saka. “With age comes experience but we have a lot of experience in this squad anyway which helps us.

“We have a lot of quality and enough experience to achieve a lot. We’re going to take it game by game but if we play like this we have enough quality to win trophies.”

Given the number of new signings in the summer – six in total – it’s little surprise to hear the players are still getting to know each other.

“We’re getting closer as a team, getting more team spirit, so things are looking good,” said Saka.

“If we play like that all the time, we have a strong chance of doing well this season and winning some trophies. This is one game, we have to do it again the next week and the next week.

“We get into a lot of good situations but we need to score more goals.

“Yesterday, we were a lot more clinical, so we’re happy with that but we’ve got to do it consistently.”

Having not played a north London derby with fans since September 2019, there was a real sense of anticipation on the terraces at kick off. The noise that greeted the goals was deafening and the celebrations continued well after the full time whistle.

“I can’t really describe how good it feels. Starting with the atmosphere in the stadium — it was crazy! The fans gave us so much energy and, for us to repay them and win like this at the stadium, it just means everything for us.

“It’s been almost two years since we played a north London derby with the fans. And you could tell it’s been nearly two years by the way they received us and cheered us. It was a special game.”

“I made a mistake” – Lokonga keen to make amends quickly

That’s a bit rich coming from a cod.

Paul
Reply to  Azeez Is Good

Great win but it was ONLY Tottenham lol!

Obvioulsy Sp*rs are Sh*t but even so a great feeling.

Made better by the quality of ESR and Saka and Odegaard and the new signings, White and Tomi. Even Xhaka played a lot better with their and Partey’s support.

Hope we keep it going…

Azeez Is Good
Reply to  C.B.

Yeah, they really are. I didn’t quite realise how bad they were. This comment will get massacred on here but – I almost, almost, almost, felt a little bit sorry for them at 3 nil. I looked into the eyes of Nuno who, to be fair, seems like a lovely man, and he was just shell shocked. For them, the champions league final was a high point. And two years later, this will have felt like rock bottom. How they’ve managed to fall so far from grace is anyones guess. But you saw in some of the players yesterday the… Read more »

C.B.
Reply to  Azeez Is Good

Do they really want to win trophies? They got rid of the manager that took them to the CL final straight afterwards!!

Matey, he reminded me of Conte when he was the gaffer for Chelsea and we best them at the Bridge. Conte went to thre at the back formation and went on to win the league and I have a feeling Nuno will do the same. In our away game too we must get a high tempo start or else they will come after us.
Our opening day loss still hurts and I hope our team has turned the corner & Arteta sets the team up to play our Arsenal game.

Viju my man, if Nuno wins the league, I’ll come round to your house and personally cook you sea bass. But yeah, he’s got to change something. His midfield is just diabolical. Did you see them jogging back on match of the day? That’s unforgivable. And the fact that Kane was the one to challenge Saka shows that he must’ve run past the whole team to get back to him. Criminal behaviour in a NLD. If that was any of our boys, I would not be holding back. I wouldn’t want to see them in the shirt again. I don’t… Read more »

VAR will solve all the problems
Reply to  Azeez Is Good

“But yeah, he’s got to change something. His midfield is just diabolical. Did you see them jogging back on match of the day? That’s unforgivable. And the fact that Kane was the one to challenge Saka shows that he must’ve run past the whole team to get back to him. Criminal behaviour in a NLD.”

And long may this continue! Please do not change, Nuno.

Nope…. ure not getting significant downvotes mate!
Nuno I respect, honest ,humble and intelligent. His BIG mistake was leaving wolves to manage a club like that. He didn’t have to go there.
He is far from a Mourinho type, deliberately screwing up in order to get a pay off, from the fools who own this poo.

I actually like Nuno and how his Wolves set up to play.

He never should have left, at least, not to Sp*rs.

Yeah, I hated playing his Wolves team. They really seemed to have our number. Which is why yesterday’s performance surprised me so much.

a fair take, i second that

Yes we can bro. Yes we can. Onwards and upwards you beautiful gunning reds!

That must have been the best atmosphere I’ve experienced at the Emirates – was great fun seeing some great football and baiting the Spu*s fans for 80 minutes. Whatever the criticisms in the recent past the recruitment over the summer and Gabrial + Tierney before that have been very good.

Yeah, so many players with character, positive energy and the exact technical qualities that we need for each position. Kudos to Edu and Mikel for these windows indeed (the Øde loan this winter applies to that too).

Epic atmosphere on the tele (must have been something to be there)! So impressive, and of course the fans fed off the players and the players fed off the fans. Both have a role to play and both played it yesterday. The age profile of these signings is key. This team can build and grow together for a long time and could do some very special things.

WILL YOU MARRY ME BUKAYO?

There’s a long long way to go but if our players perform, as we know they can on their best day, over the course of the season things may get very very interesting.

ManU weakened their best Player (Bruno) by signing CR7. Thats why they will fail this year… I hope

VAR will solve all the problems
Reply to  Announce Bendtner

Liverpool doesn’t look too solid either. Way the Brentford attack took their defense apart will encourage other teams to be bold. And they are likely to be most impacted by the African Nations the most.

What I liked was Ramsdale talking to David Seaman about how he could have done better for the goal he conceded. Brilliant attitude

Calm down boy…
Gulf between city and us is so wide

Fair point. It was especially wide during the 2020 FA Cup semifinal 😉

Did I hear it was ‘Only Tottenham’…

This guy is a legend. Mark my words.

I agree with Saka. If the team plays every game with the NLD mentality, we will be in the top 4 discourse by Christmas.
Man U is vulnerable. They are not as good as the other top 3. We can rein them in.
All we need is luck on the injury front. The absence of Europe should help on that front.

Lets not forget Harry Kane falling over …. and that inch perfect assist for Sakas goal