The problem was the middle part of the game, especially between the goals for both teams. Arsenal went passive and Crystal Palace got a foothold in the game. I suppose it wasn’t that different than the game plan that worked great against Sp*rs but Crystal Palace was significantly better at keeping Arsenal pinned in their own half and not allowing Arsenal room to break.

It’s a point that feels pretty good (a late equalizer always feels good) and something that keeps the unbeaten run going but it is a missed opportunity to gain on rivals and move up the table. 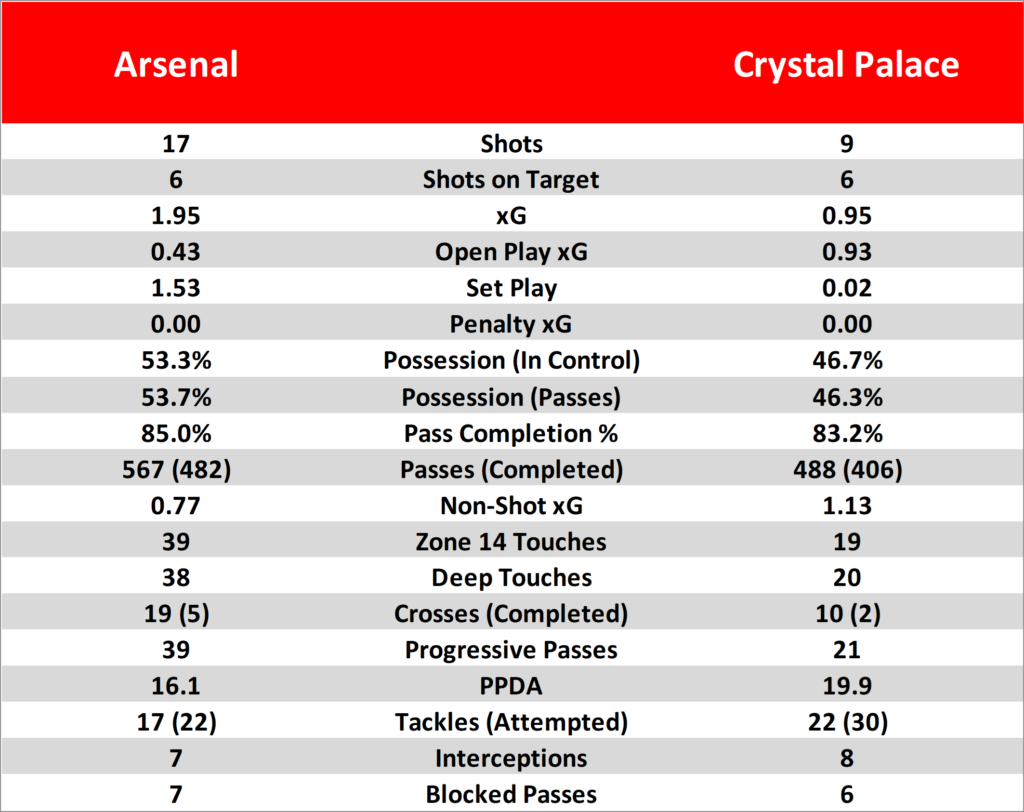 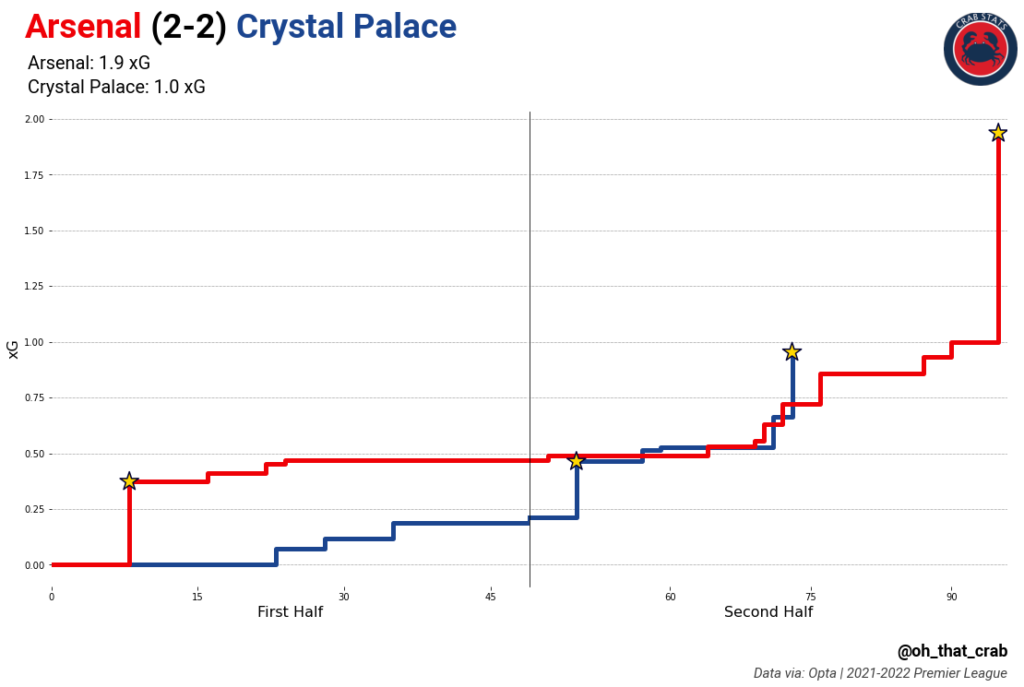 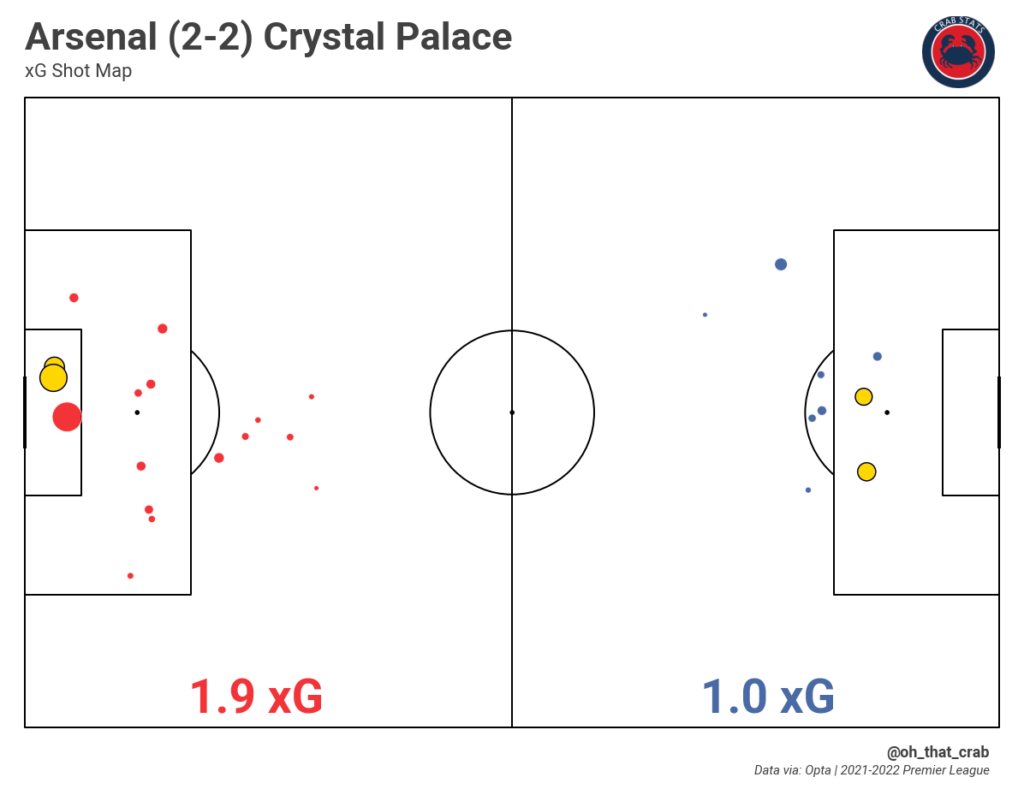 17 – Shots from Arsenal, the third time this season that they have taken 15 or more shots.

0.15 – Expected goals per shot, the highest average quality this season.

3 – Big Chances for Arsenal, the most they have had in a match this season. Before this match, Arsenal had just 6 total Big Chances. Two of these Big Chances came in the final scramble that ultimately led to the equalizing goal.

3 – Shots from taking the ball off Arsenal.

0.3 – Expected goals for the 6 shots that Crystal Palace took that were not a result of an Arsenal error.

0.3 – Expected goals for the 3 shots that were a result of an Arsenal error.

On the Arsecast Extra, Andrew made a very good point that Crystal Palace really didn’t create much in this match outside of what Arsenal gave to them/forced Arsenal into. The 6 shots that they created were pretty tame, with 0 of those shots coming in prime locations and 5 of them coming from further than 18 yards from goal.

38 – Final third entries for Crystal Palace, 27 by passing, 11 by carrying the ball.

66% – The percentage of Final third entries for Crystal Palace that came from the 15th minute to the end of the first half, 18 from passing, and 7 from carrying.

5 – Final third entries for Arsenal from the 15th minute to the end of the first half.

One of the most frustrating moments in this match was after the goal Arsenal seemed to have lost the ability to control the match at all through the end of the second half. It looked eerily similar to what happened at times against Brighton, Arsenal would get the ball, try to play it up the field but fail and the ball would be coming right back at them. In this 30+ minute period, Arsenal had just 9 possession sequences where they were able to string together 3 or more passes and just 3 where they were able to string together 5 or more. For contrast in the opening 15 minutes of the match, Arsenal was able to have 9 sequences where they completed 5 or more passes in a row. 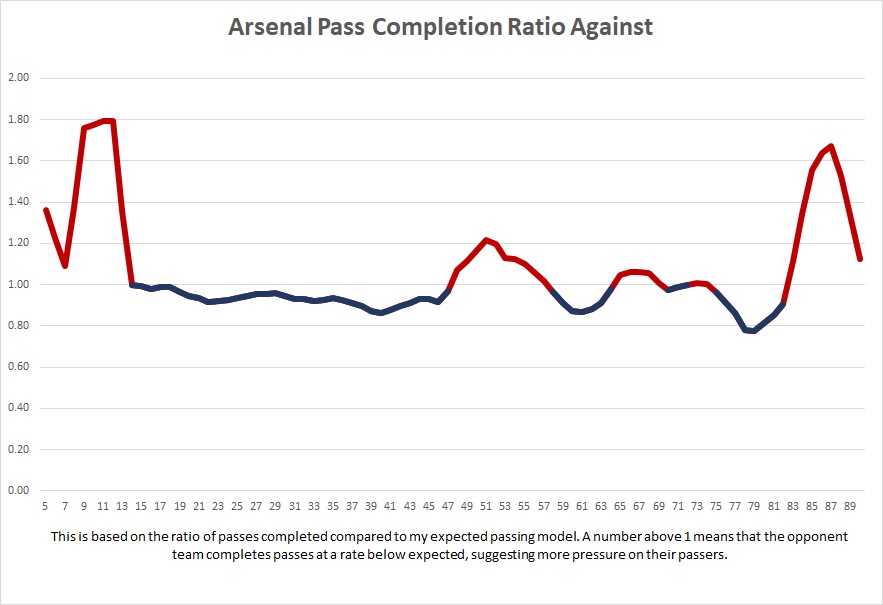 The above chart shows the ratio of expected pass completion compared to actual pass completion, I use this as another measure of pressure. I figure if teams are passing worse than expected it is a good signal that the other team is probably applying effective pressure against them, with the opposite implying either poor pressing or just not pressing.

In general this season, Arsenal has been a relatively passive defensive team in terms of trying to win the ball back.

31.9 – Time that Arsenal has won the ball back per match after applying pressure this season, ranking last.

103.4% – The expected passing ratio (actual completion/expected completion) Arsenal allows teams to complete against them, ranking as 18th hardest to complete passes against.

None of this is a good or bad thing per se but instead a description of the style that a team implements. I will leave it to you all to determine your own thoughts about how Arsenal is doing with their plan to win the ball back.

(Haven’t finished reading yet) isn’t the shot map wrong on the position of our first goal? Auba was practically on the far post was he not?

Interesting, yes I might need to check if things are being mirrored for some reason

Came back to say keep up the good work though! Stats are way more interesting with graphical representation!

I think that’s definitely the case. Both goals were from the left-hand side and both are showing as the right-hand side on that map. Is that Opta’s fault, rather than Scott’s, though?

match after match, it never get better – where is the progress of the process?

I can see it already. Arsenal finish 10th, Arteta given a pass due to Xhaka injury, Afcon, and the youngest squad in the league.
See you in May guys. What exactly is going to change?

I’m predicting we finish 9th overall, but 1st in the league over the last 2 months as we climb up from 12th and everyone will be talking about our great season ending form (with nothing to play for)…”Bzzzzzzz, groundhog day!!!”

We would have finished top 2 if you only count the last quarter of the season will be the claim. If the process is supposed to deliver laboured, passive football, it’s delivering it in spades.

It feels like Arteta has reached his ceiling. A vast amount of money has been spent, fans are back and all the players are his by choice. Yet the team lacks any cohesion with arguably 3 number 10s types playing and leaving the middle of the field empty. Inexplicably he thinks a one man midfield is good enough in the Premier League, although he is unlucky that Partey shows so little regular form. I never understood why he went in so heavy of White, when central midfield is so lacking. £50m could have got something quite impressive. Mikel also ignores… Read more »

That is certainly an issue with single shot stuff.

The team is coached so badly, it’s painful to watch

Overcoached? We kept hoping for creative players, and now we have quite a few–but they aren’t creating. Maybe a more Wengeresque “let them express themselves” approach would work better. And yes, we should press more, and better.

TBF, there are some slight improvements in our press. It’s an issue I have been watching because our press has been shite, but it has improved quite a bit over the past 5 games. It still has a ways to go, but there are signs of improvement. I think one of the major issues is that we see how much we ourselves get exposed to the press and wonder why we cannot do it more.

I have also been watching the press, or rather the players who should be pressing. I just don’t think many of our players have that controlled aggression in them to do it effectively. Always a few yards behind or seconds too late.

If he was interested in a press, surely Martinelli would get more game time. Aubameyang and Odegaard at times do a bit, but it doesn’t come naturally to most of the squad.

Look at how Palace and Brentford hounded us. I thought Arteta wanted them to play around that kind of thing.

This I absolutely agree with. I just don’t think Arteta knows how to deal with a player that plays so much on instinct and energy and natural flair. Again, I really hope he goes out on loan in January, because I can’t see an avenue for martinelli to get into this team under Arteta, and even if he does I can’t see him flourishing right now because Arteta’s tactical rigidness stifles too much of Martinelli’s natural game. It’s this sort of example that ‘still really makes me question Arteta’s viability at Arsenal. Long-term he’ll probably be successful, but he is… Read more »

I agree. I can’t help but thinking the Sp*rs game was a case of “nothing to lose”, and the players took it upon themselves to express themselves. I also think the players were expressing themselves in the first 15 minutes against Palace, and for whatever reason after going one-nil up they fell back into Arteta’s drab football routines and the team really suffered.

An Arsenal team taking the foot off the gas after scoring a goal and letting the opposition back into it? No… come on man, that would never happen…

I think these numbers confirm my impression–which both Andrew and James shared on the podcast–that a lot of the talk about how Palace “dominated” the game is nonsense. They had a very good period from after our first goal to the end of the half, but created very little danger even then. A lot of supporters will answer that Arsenal ought to win matches like this easily, and I agree. But that’s still very different from saying we were comprehensively outplayed and didn’t “deserve” the draw.

I’m sure you didn’t mean in this context but that about sums up where we are, we were not comprehensively outplayed at home by Crystal Palace and deserved the draw. 😂😂

SarcasmB0t
Reply to  A Different George

So, to sum up, after two years under Arteta and about 200 million spent, we are only marginally worse than Crystal Palace three months after they appointed Vieira.

I think it’s the philosophy of the manager that is rubbing off the players the wrong way. The manager needs to implement a better style of play. You don’t score a goal against Crystal Palace or any other opposition for that matter and cede possession to them to run riot at you. It beggars belief!!!

Just looking at your numbers, one might be led to believe that Arsenal was actually a competitive presence in this game.

Aeron Ramsdal should save the second goal against Palace. Arteta omitted some players are better then his regular players.