As Arsenal dismantled Everton 3-0 on Sunday in the WSL, it was notable how often the holy trinity of Vivianne Miedema, Katie McCabe and Tobin Heath combined on the left-hand side to expose Everton. Arseblog News asked coach Jonas Eidevall about this post-match.

“When you watch the game you see that we were pressing Everton to get them to go over to their left and when you do that, you open up spaces on their right and we saw that many times today and when you have the quality of players you are talking about there, yes, you will cause problems for the opponent. We were able to get many two versus one and three versus two situations on that side, especially in the first half.”

If nothing else, you now understand that I ask some of these questions with these analysis pieces in mind and, sometimes, the manager hands them to you on a plate. So let’s delve into some examples of what Jonas was talking about.

Arsenal wanted to tilt the pitch in the first half by attracting Everton to Arsenal’s right, where Mana Iwabuchi spent a lot of time near Nikita Parris, before hitting them with a quick switch to the left. They carve Everton open in this manner early on. 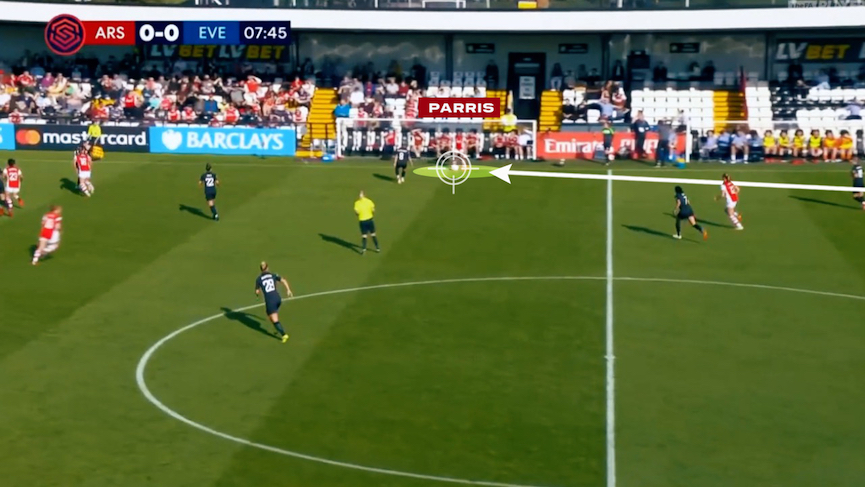 Arsenal play from the back and Leah Williamson works the ball to Nikita Parris on the right touchline. 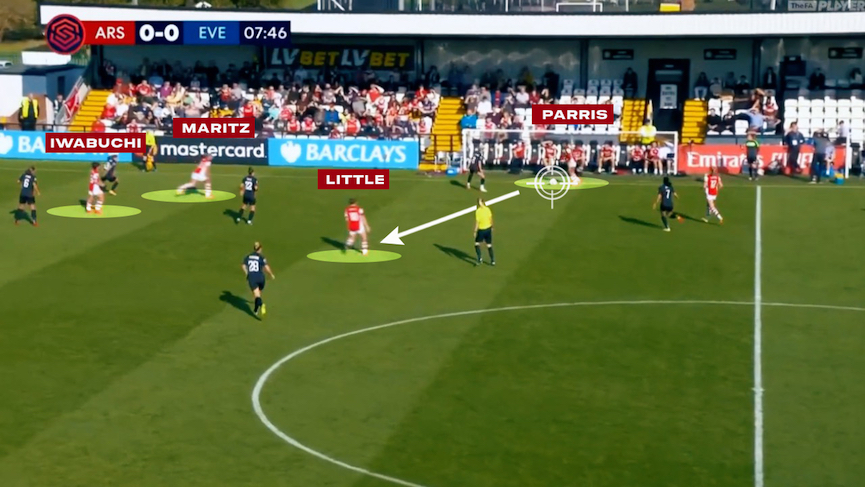 Kim Little moves in-field to present herself as a passing option and you have Iwabuchi and Maritz over on the right. That’s four players in the shot, three of whom are right over towards the touchline, dragging Everton players towards them. 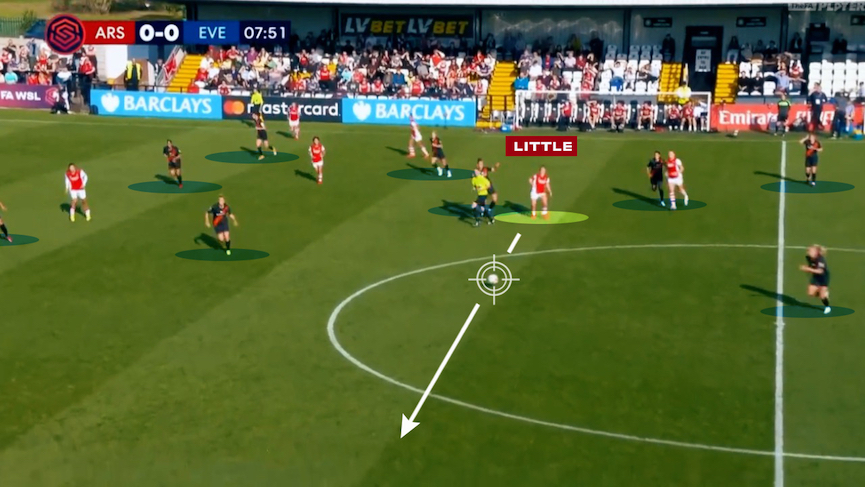 Parris finds Little, who quickly turns and switches the ball to the left flank. I count nine (eight and a half if you’re being generous) Everton players in the frame who are in their left half of the pitch. Sandy McIver is obviously in goal, so that leaves one Everton player protecting their right side and that’s a lonely job for Leonie Maier. 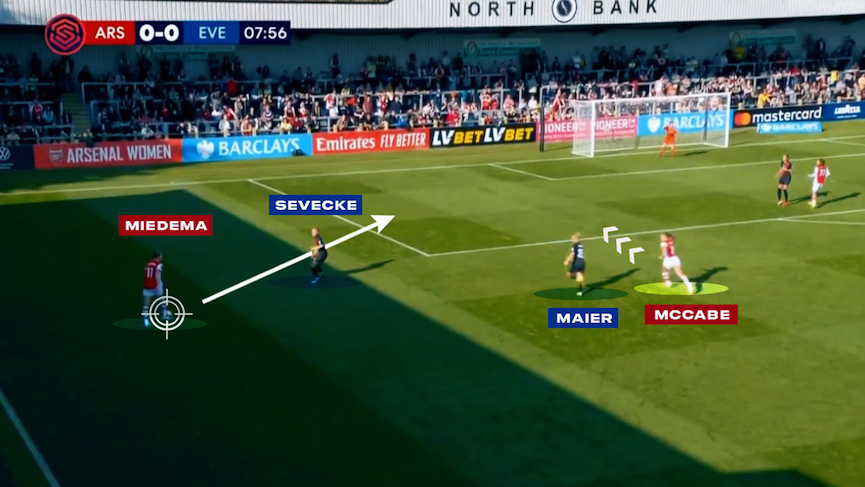 Miedema has drifted to the left flank and Sevecke is forced to sprint across to cover the space, while Maier desperately tries to keep pace with McCabe, who has a lot of space to run into. Miedema duly plays the ball into that area. 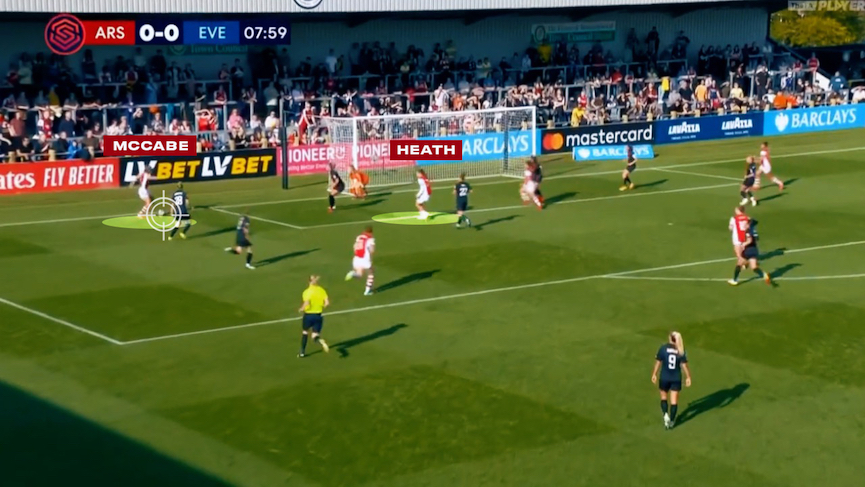 McCabe is in a dangerous position for the cut back which, on this occasion, just doesn’t quite reach Heath. But the pattern is set.

Jonas talked about pressing Everton in a way that encouraged them to go to their left and we see an example of that here when Sandy McIver collects the ball. 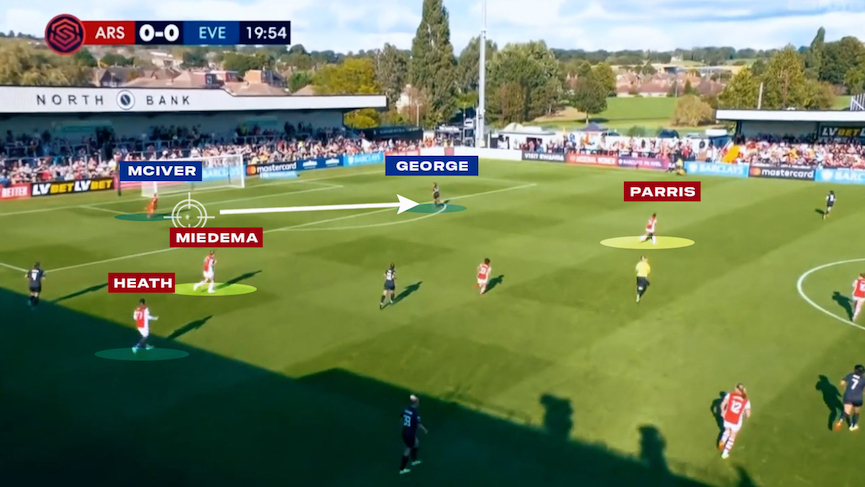 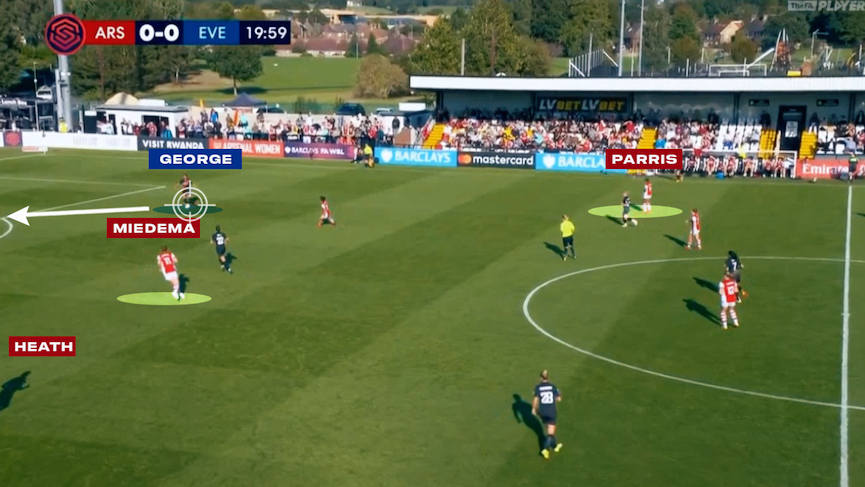 McIver duly goes to George who then turns the ball back to McIver. Miedema and Heath have kept their high positions while Parris continues to sit off behind the play a little. 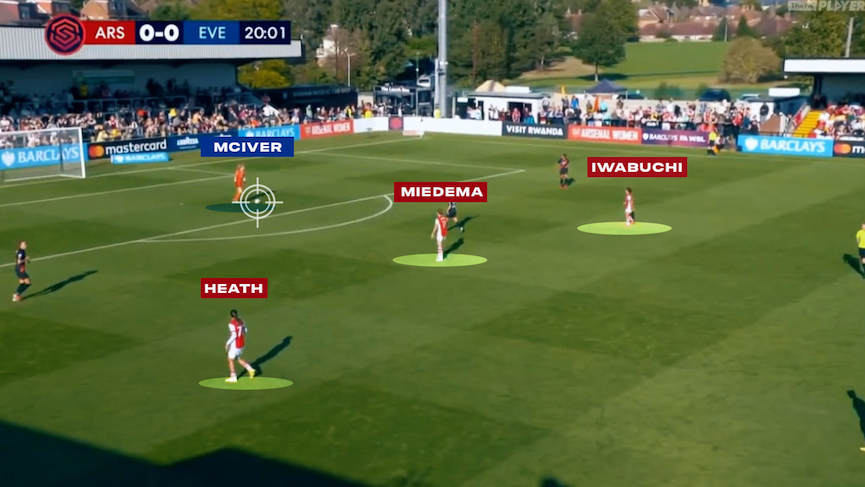 It’s Iwabuchi who joins the press on the right with Miedema and Heath still nice and high. It makes the left side the most attractive option for McIver yet again. 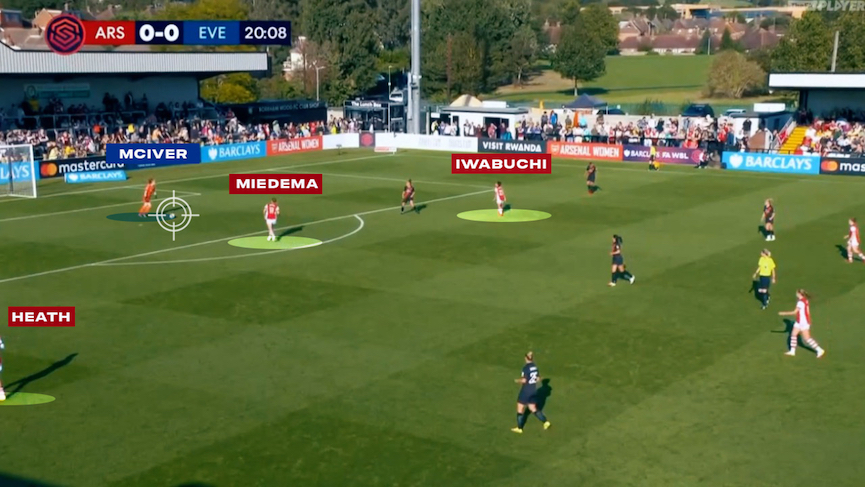 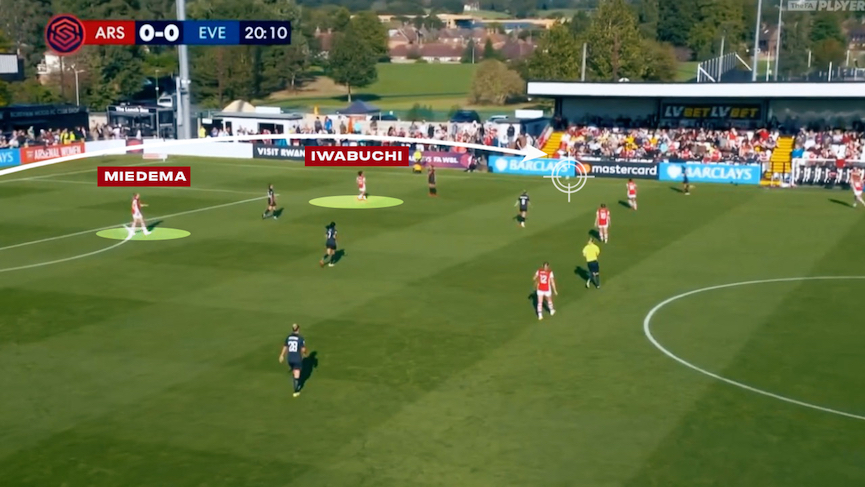 Everton are trying to manipulate the Arsenal press by trading passes between centre-half and goalkeeper but it doesn’t work, Arsenal hold firm and McIver eventually floats the ball out of play on the Everton left. 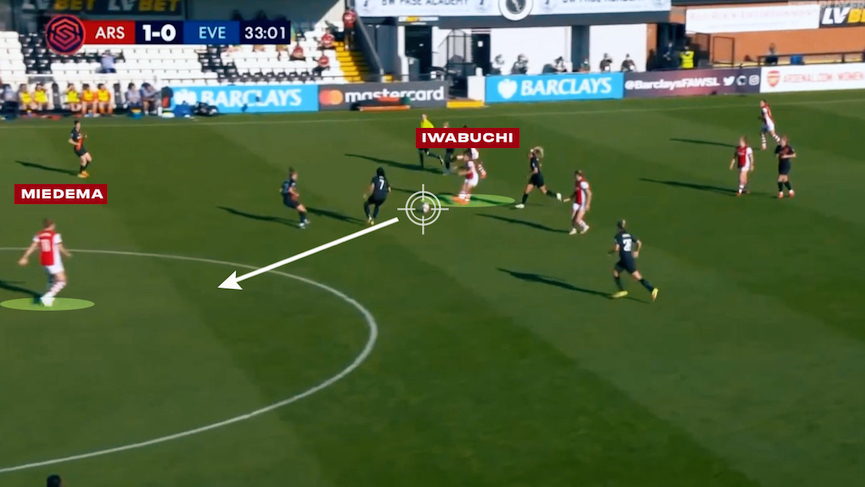 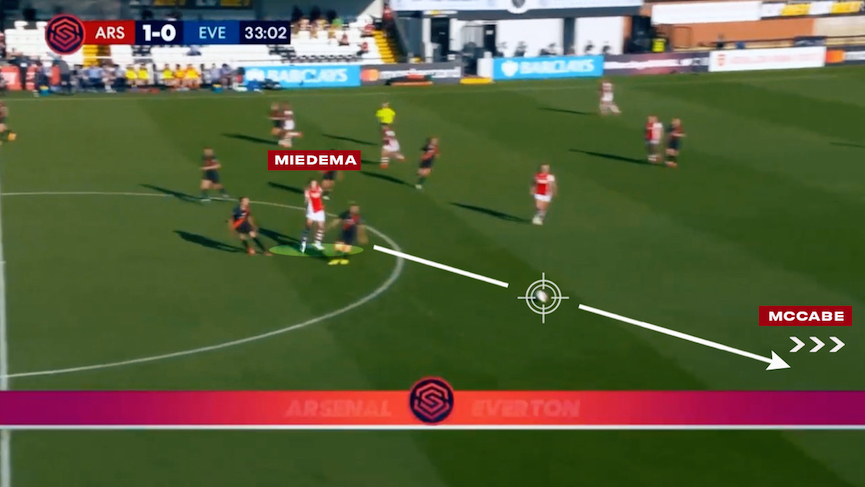 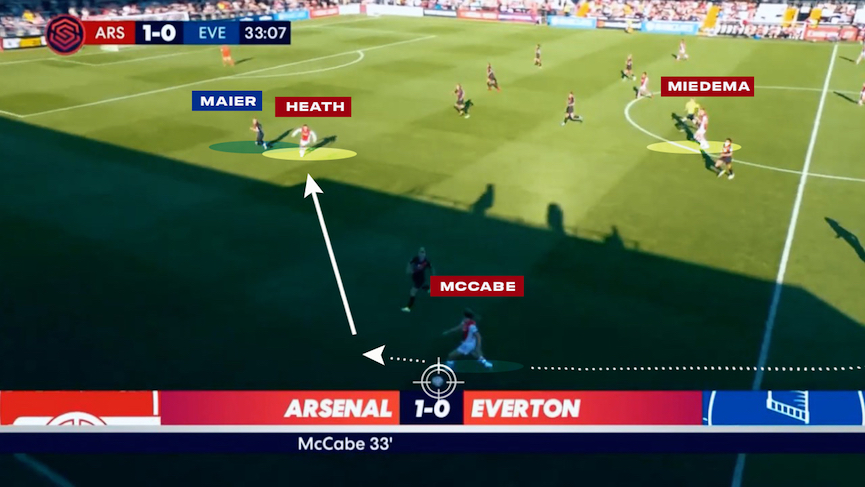 McCabe has plenty of space to dribble the ball down the line where, again, Leonie Maier is isolated. Tobin Heath has filled in the centre-forward position that Miedema has vacated. 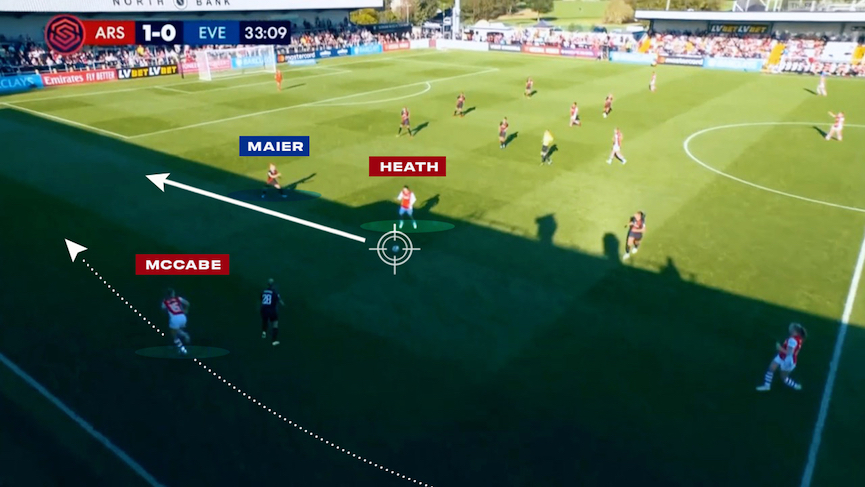 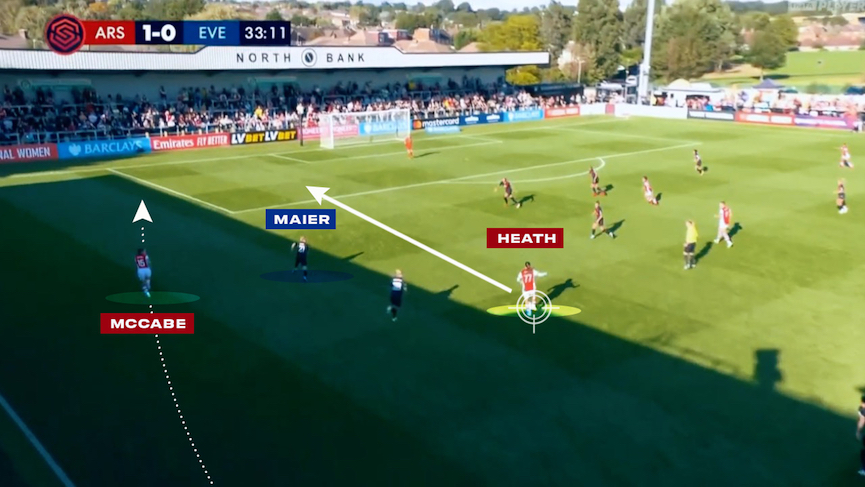 Maier doesn’t know whether to follow Heath or stand off and track McCabe and ends up not doing either as McCabe continues her run. Heath makes the obvious pass. 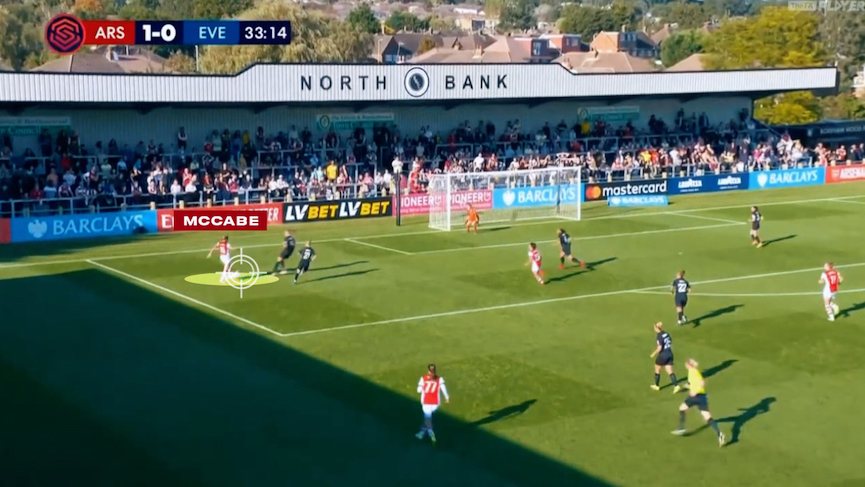 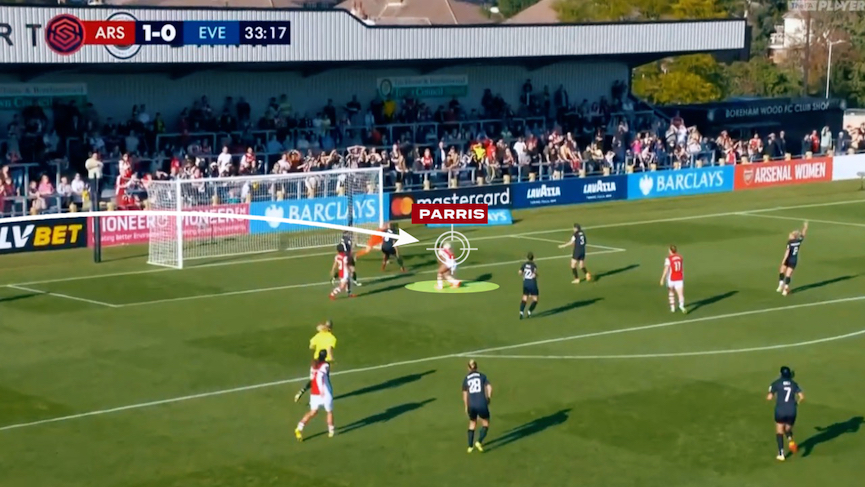 McCabe’s cross finds Parris but she just can’t quite bring the ball under her spell in the area. 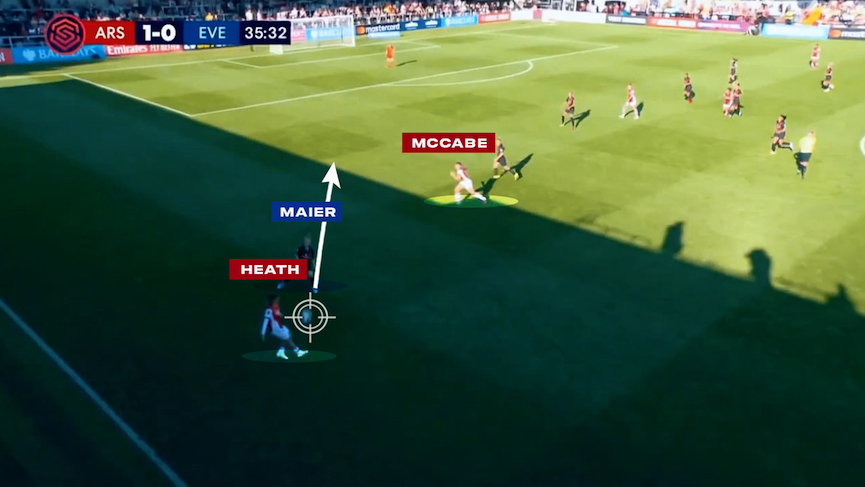 Arsenal’s next attack is very similar, they work the ball from right to left, Wubben-Moy finds Heath who has come short and drawn Maier towards her and McCabe is running into the space behind, which Heath finds with a first-time lofted pass. 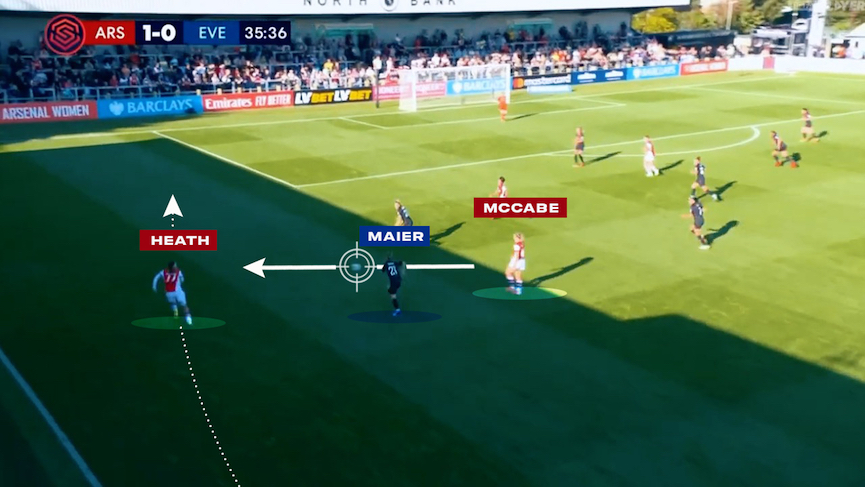 Heath continues her run on the outside, which McCabe duly finds. 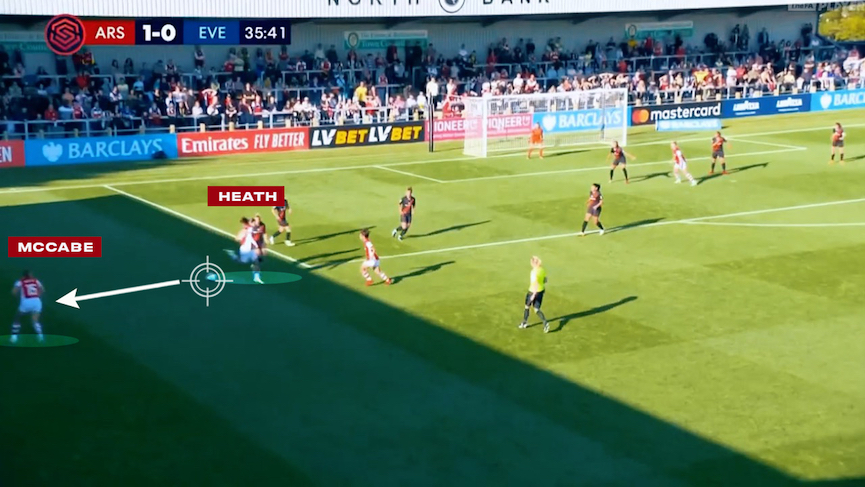 McCabe doesn’t stand on ceremony however, as Heath dribbles in-field, McCabe makes a run on the outside to create another overload. Heath finds her run by rolling the ball backwards. Alas, on this occasion, McCabe’s cross is overhit and just sneaks over the crossbar. 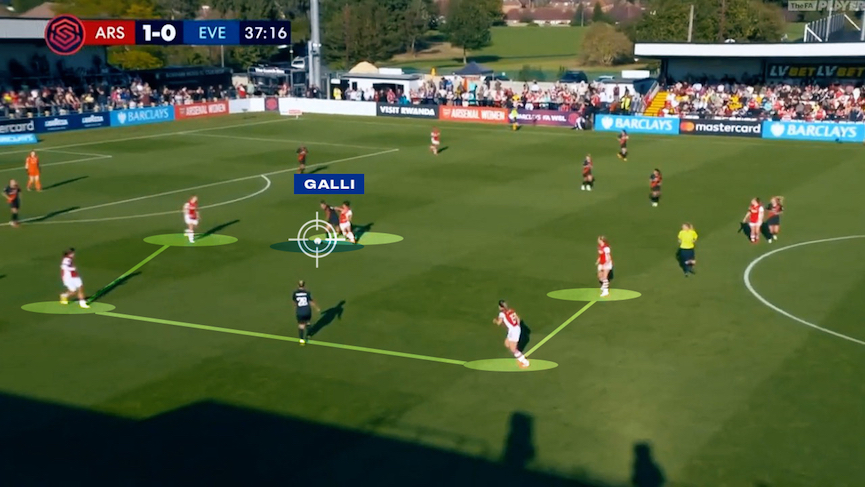 Here is another example of Arsenal encouraging Everton over to their left. McIver rolls the ball out to Galli and look at where the Arsenal press is concentrated. They are blocking Everton’s right side up completely. 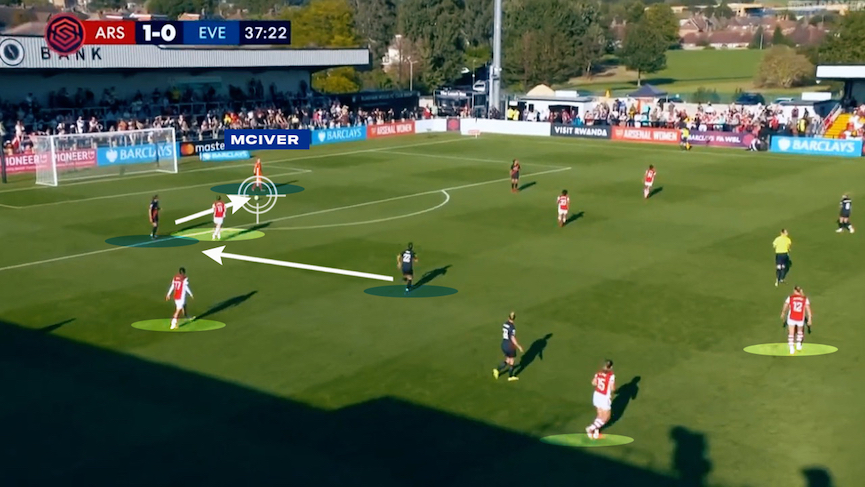 Everton are hassled away from that flank and bullied into passing the ball back to McIver. 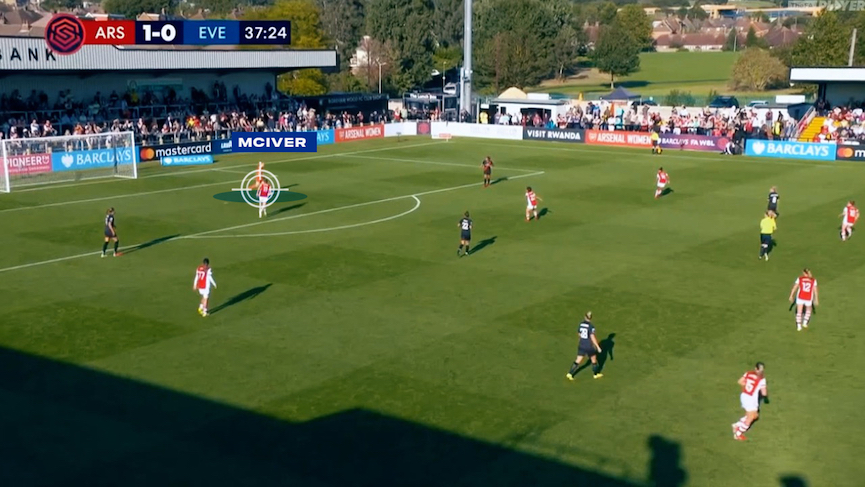 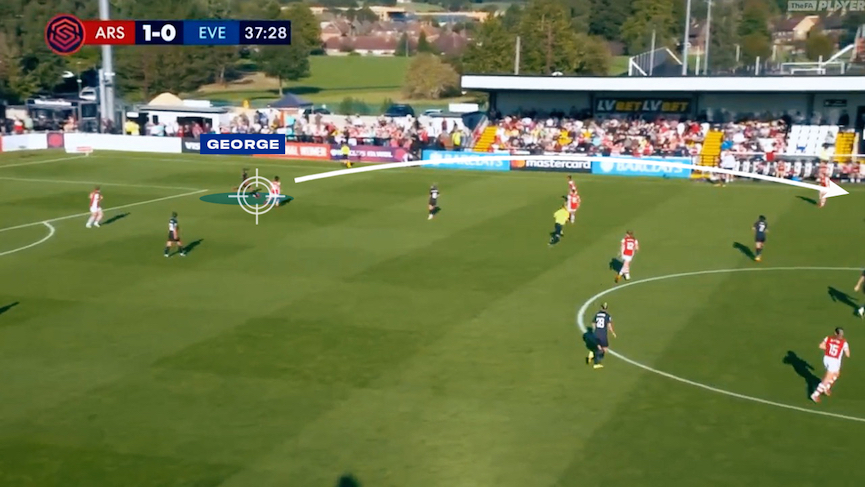 McIver rolls the ball to George who then elects to launch the ball up the right flank and Arsenal regain possession by winning the second ball. Look at the space that is being left on Everton’s right. In a few seconds, Arsenal are occupying it in a dangerous situation. 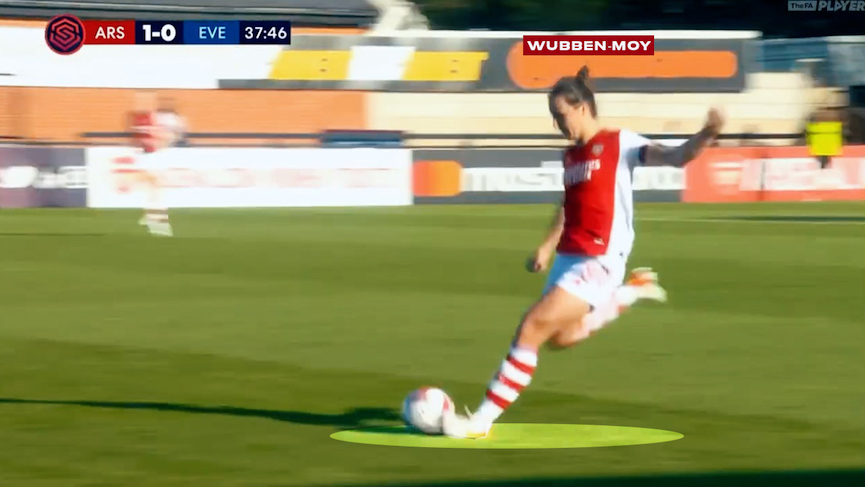 From here, Arsenal quickly move the ball from right to left in their own half and Wubben-Moy ferries the ball out to McCabe at left-back. This pressing action, combined with quickly switching the play exposes Everton again. 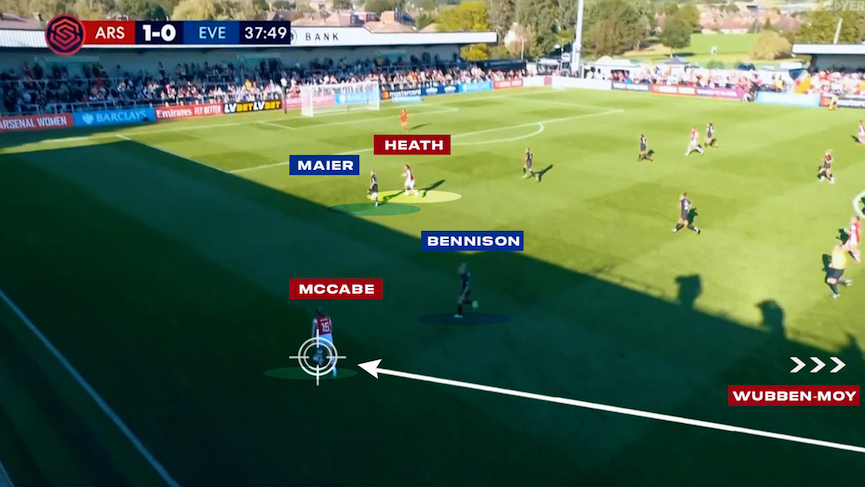 McCabe has acres of space to play with in tandem with Heath again pushing onto Maier to keep her away from the Irish international. 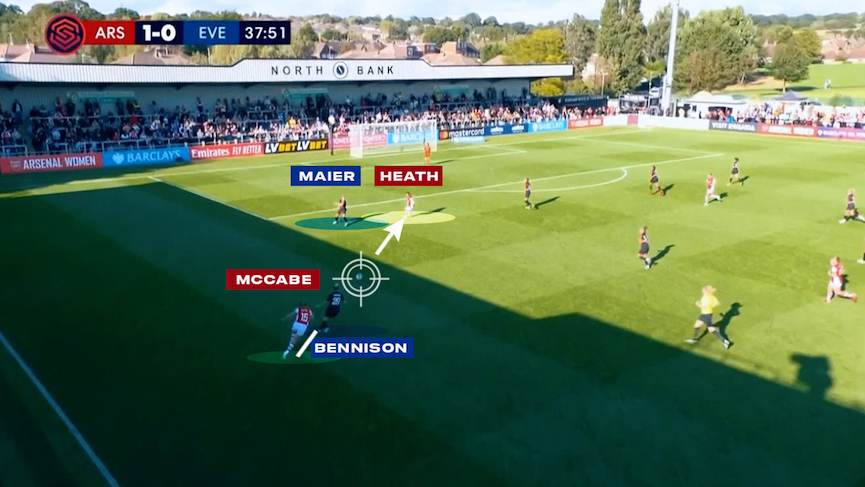 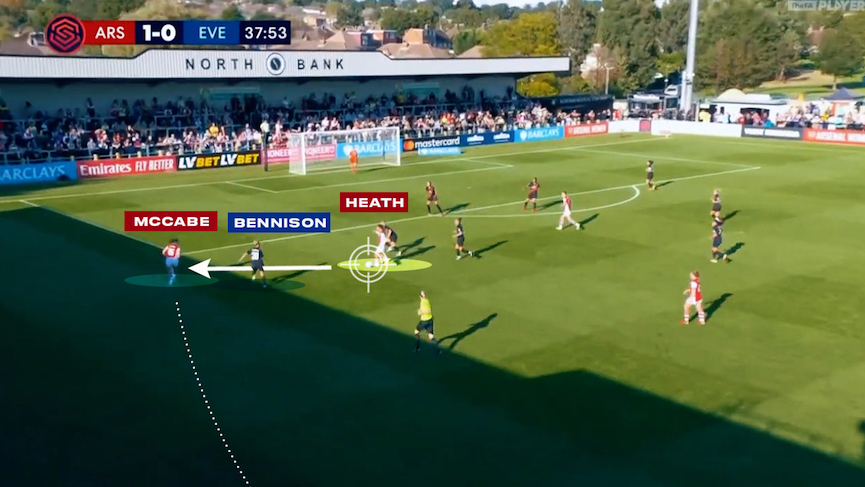 By now you know the drill, Heath controls, McCabe keeps running and Bennison struggles to keep pace while Maier has been occupied by Heath because the right centre-half, Sevecke, has been dragged across. 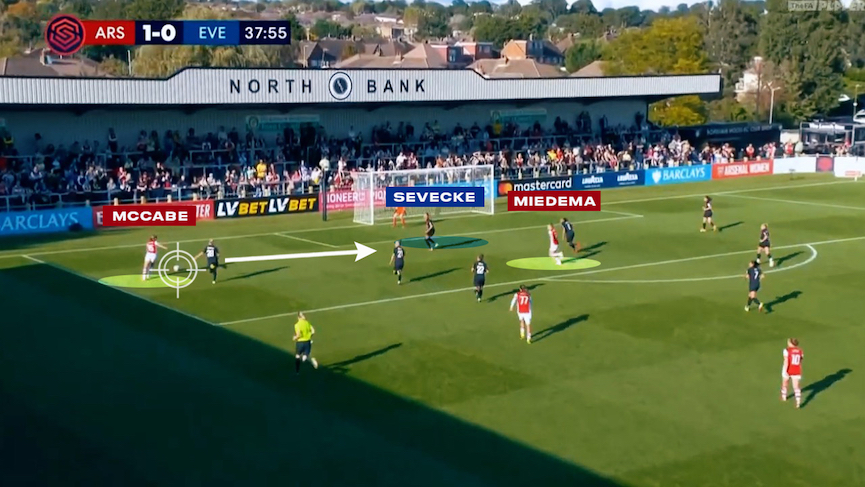 The left-back is once again in cutback territory and only a last-ditch interception from Sevicke stops Miedema from being presented with a clear chance.

The pattern abated a little in the second half as Everton fixed the leak somewhat and Arsenal sought to control the game. But the McCabe and Heath combination on the left already looks promising.

I knew Tobin Heath was going to be a brilliant signing!

Great analysis Tim! The press was great to watch.

Have a question for you, outside of Arsenal, Chelsea and City which teams are getting close to challenging these 3? Is Man Utd expected to challenge in the next year or two?

Lol I’d say manutd looked like they were, say, about a year ago. And then things have gone downhill since. Resources wise you’d think it’d be Man Utd or maybe Everton; maybe Willie Kirk can get everton’s many new high profile signings to click with the upcoming fixture list kinder than facing the top 3 in the first 5 games? Or maybe it will fizz out like United did?

Thanks for analysis Tim and it’s interesting to see tactics playing out almost by the book. Probably a dumb question, but would it benefit the game if the women’s team played at home on weekends when the men are away and vice versa? I know there are fewer teams, and a double header would risk ripping up the pitch, but run cheap tickets and people are sure to come. The more support and exposure the better, the squad get treated more as equals as the men. Or am I missing something? Don’t buy the initial empty seats would look bad.… Read more »

It’d be too difficult to do scheduling wise because you’d have to do that for every club and that’s not possible. Frankly, it is just impossible to arrange things around the men’s calendar beyond what they already do (putting a lot of big ticket fixtures on men’s international weekends).

Question. How do you get to a point where you see this stuff as it’s playing out on the pitch in real time? I love reading these tactical analyses and I feel like I learn so much from them. At the same time, I’ve only started watching soccer in the last 5 years, and only intensively since the start of the FA player (hurray for the FA player making the WSL easy to follow!!). And while I can see during a game whether it’s going well or not, I’m very far from seeing tactical stuff like what Tim is always… Read more »

I think having played gives you some idea but unless it’s at the level these guys do, only a little! It’s easier to do in the stadium because you can watch what’s going on away from the ball. But I’ll take notes at games if I notice something happening a lot but being able to ask the coach about it is the real kicker. So when you read my first or second question post match, you can usually guess what these pieces are about! I didn’t notice the pressing in the ground at all, I only noticed Arsenal going down… Read more »

Thanks Tim, this is illuminating!