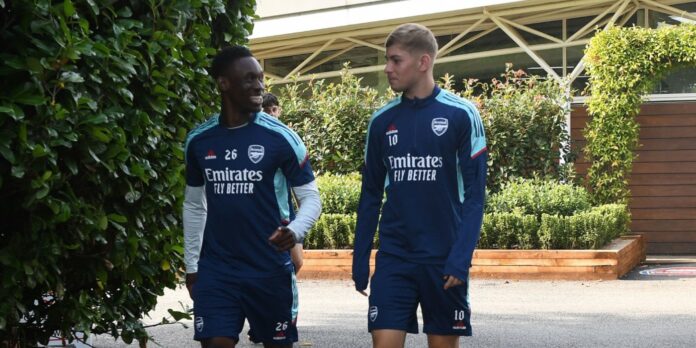 Emile Smith Rowe, Folarin Balogun and Tyreece John-Jules have been called up by England under-21s for the upcoming 2023 European qualifiers against Slovenia and Andorra.

The trio was also part of Lee Carsley’s squad in September although Smith Rowe had to withdraw due to illness.

In fine fettle for the Gunners, Smith Rowe will be hoping to use the opportunity to prove he can step up to the senior squad.

Gareth Southgate confirmed yesterday that he was tempted to call up the attacking midfielder this time around after keeping close tabs on him.

“He’s a player we like a lot and he was very close to making this squad,” said the England head coach.

“At this moment in time, I don’t want to bring in any more younger players out of the Under-21s. They have got to earn that right over a longer period

“I thought his [Smith Rowe] performance against Tottenham was very good, we know how he finished last season as well. I can only say he is a player we really like and he was close.”

Elsewhere, Daniel Ballard, a full international with Northern Ireland, has outlined his ambitions to secure a place in Mikel Arteta’s first team squad within three years.

Currently on loan at Millwall in the Championship, the 22-year-old said: “That’s got to be the goal. Of course, I’m fully focused on staying in this Millwall team and working extremely hard.

“I want to get as much game-time as possible and help Millwall win every game possible.

“But of course there is an end goal, whether it be next year or in two, three years, I think the main goal is to play for Arsenal.”

With this lad, I know it’s a question of when, and not if, he gets into England’s senior team, and I believe it will be sooner than later,… simply too much talent in there

ESR playing for the under 21’s is equivalent to when AFTV got an interview with our Andrew.

It is pretty cool that we could and should have four Arsenal players going to the World Cup.

Get Orbinho on it. When was the last time that happened? I’m guessing it’s not happened in this millennium.

But maybe Cole should be retrospectively discounted as an Arsenal player

Dan Ballard is going under the radar but he’s doing really well, I hope he gets a chance in the summer pre-season to stake a claim. Flo and Emile are surely going to blow them away at u21 level, Southgate will surely have to include Emile next time.

Yep I wouldn’t rule that out. He’s 22 years old so a decision will likely have to be made at the end of this season.

There will be a bit of a shake up with defenders next summer especially if we’re back in Europe.

Saliba will come back, Kolasinac will leave, and I suspect one of Chambers, Cedric, Mari may also leave.

That is a lot of players – 17; and funnily, I can’t make a case for any one of them.
I thought of Reiss, but on second thoughts, it’s best if he went somewhere else.

Give youth a chance
Reply to  Atid

Of those, I’d expect Chambers to stay, although not as first choice. He can cover CB, RB and DM so a very useful player to have in the squad

I wouldn’t be surprised if Holding stays on too, albeit as 4th choice behind Gabriel, Saliba and White

ballard is doing amazingly well and already racking up the international caps. haven’t seen much of him though – anyone who has seen him play regularly have an opinion on his prospects of breaking through at arsenal?

Yeah, there’s quite a few that are knocking. And in any other era, they’d be likely to get a chance. I personally can’t see any more youth players being brought into the fold for at least a year. With ESR and Saka doing amazingly but still finding their feet, we just can’t overload with raw youth in the side. Even Martinelli and Balogun are really feeling the results of a very youthful squad. I suppose one of the drawbacks of having a team of youngsters is that it does make it that little bit harder for the youth to find… Read more »

Another clean sheet for Saliba last night, in Europe no less.

Looking like a very smart decision by Arteta to send him on a year loan to a team in Europe and playing 90 minutes every week.