A few weeks ago, Mikel Arteta was the bookies’ favourite to be the first Premier League manager to get the sack. This week, he’s been spuriously linked with the now vacant head coach position at former club Barcelona. Things change fast in football.

As you can imagine, he gave short shrift to the suggestion he might be interested in a return to the Nou Camp at this point.

Overnight, the Catalan giants confirmed they had sacked Ronald Koeman after a string of damaging defeats in La Liga and the Champions League. Various reports have since suggested legendary midfielder Xavi Hernandez will take on the challenge of clearing up a mess that has been years in the making.

“There’s been a lot going on there the last few years,” said Arteta in his weekly press conference.

“Obviously, how Covid has affected the way [they operate], you also have to overcome a situation like the departure of [Leo] Messi, the key player for many, many years. All that takes time. We will see. I hope that everything works out well.

“I’m extremely happy at Arsenal. I feel privileged to be here and my only focus is here.”

Unlike the boss, every time we hear a story about Barcelona being in crisis, we point and Nelson Muntz a very loud ‘HAHA’ in their direction. 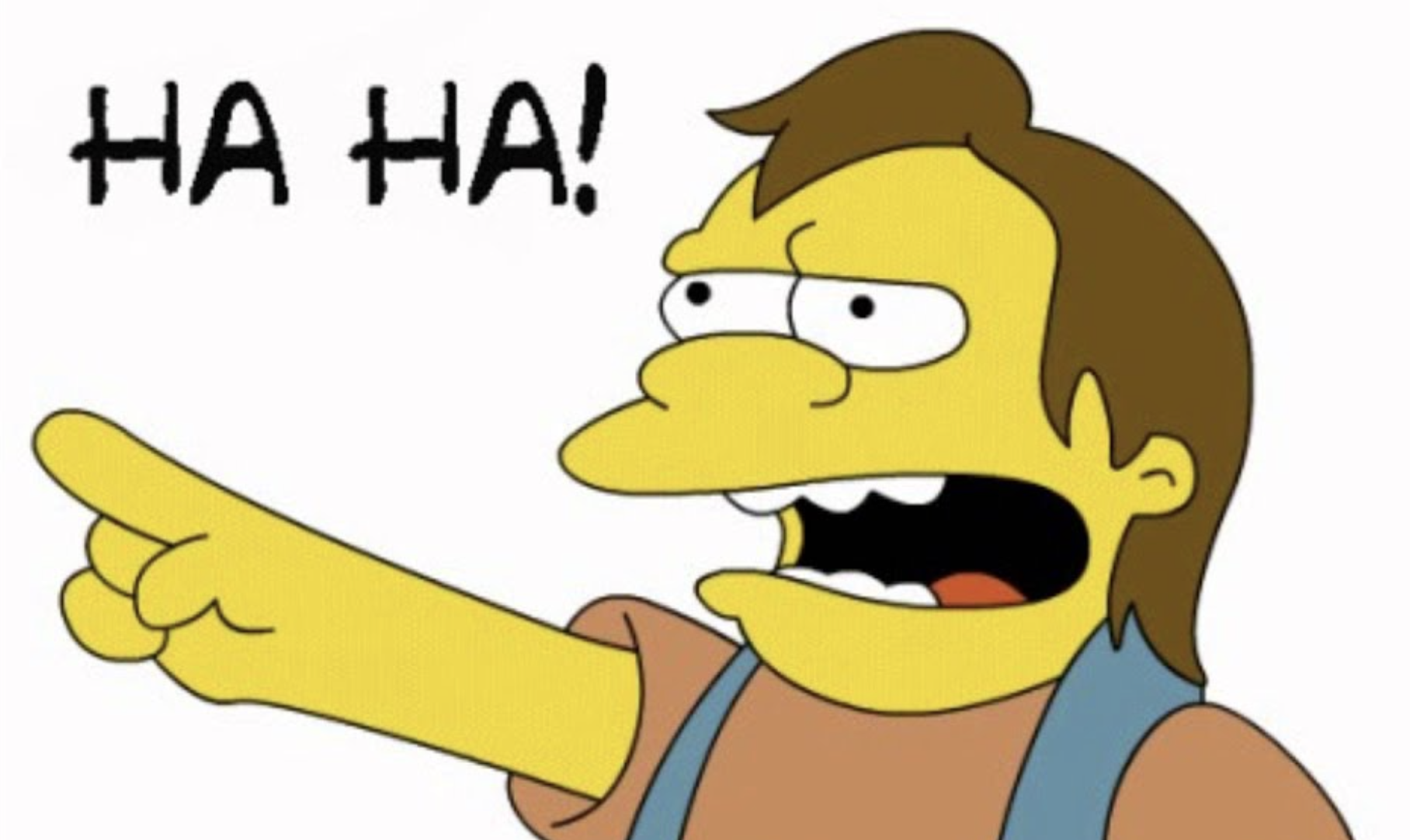 I wish them the very worst for the way they tapped up, signed, and wasted Cesc. He was our golden boy and captain. Fuck Barcelona.

I’d give all twenty fingers and toes to join you in that sentiment. Let them drown in the mess of their own doing, years of bullying other clubs to sign their best players for almost nothing. Hate them with a special passion.

Make that a double

Another one fites the dust?

The spent their way to oblivion and then expected to get bailed out by the Super League. Even with individual tv deals they couldn’t stay within their means and refused to sell Messi one year early for £100m.

No arguments in Cesc, but counterpoint: they DID pay us for Vermaelen, Hleb, and Song…

I don’t think any player has left Arsenal, joined Barcelona, and lived up to the status he had at Arsenal.

I call upon all those with more than ten toes and/or ten fingers, to make use of their extra priveldges on this occasion

Does my third leg count?

If it can, at least it’ll have one use.

And it always rankles that we let them buy Henry for a song.

Walking round Paris in ‘06 and seeing at least 3 Barcelona shirts with HENRY 14 on the back.

For the first time, and maybe the only time, in my life I can safely say that the Arsenal job is far more alluring than the Barca job.

Although I worry about the dominance of the English game and the impact that has on those iconic champions league fixtures and the general competition, if you run your club with unending arrogance and with greedy unsustainability, then this is what happens.

Unless you are City, PSG, Chelsea or Newcastle.

Believe me those twats ain’t safe either. Remember one AC Milan

City seem to be building something of an empire, but I do still wonder what would happen to Chelski if the owner got bored one day… Probably the answer is ‘get bought by somebody even richer’

Chelski owner is not going to get bored unfortunately…Couple of years ago, I was naively thinking we were reaching parity with Chelski. The investment they made over the last couple of years made the gap larger than ever.

I think the dominance of the Premier League, due mainly to world television rights, is a serious issue. What used to be true of the top English clubs and their ability to buy players from, say, Ligue 1, is now true of *every* (or almost every) Prem club and of *every* European league. Big clubs in Italy cannot compete for talent against, for example, Leicester, Villa, or Everton, let alone the Manchester clubs and Chelsea. Inter wins the league and sells everyone. Some of this is probably temporary, caused by covid disruption of revenue, but I am not sure European… Read more »

Their time will come.

I have a severe lack of sympathy for Barcelona. A ridiculous way to run a club.

Would put years on whoever tries getting them out of that mess.

Exactly. If I’m Xavi, I don’t see the allure of taking that job now. Talk about a poisoned chalice.

In the context of their current situation and lack of funds, they might give him the kind of patience that hasn’t been afforded to anyone else, trying to stick with him until it works. Kind of like what we’ve tried to do with Arteta

Shit club. Even putting aside the state aid violations, the dodgy decision by that judge to destroy their drugs tests and the weird champions league refereeing decisions.

The refereeing in their comeback against psg was criminal. A couple of the games we played there were not much better.

The van Persie red card will always upset me, but the one that really sticks out is the Chelsea game. The referee wasn’t even subtle about it.

So a club with literally no money are now competing with a club who are not in the Champions League, for a player who made the final of that tournament last year and could go pretty much anywhere.

I have literally no idea what these people are thinking when they come up with this stuff.

The Beast
Reply to  pan Julian

The most important word in all that is “could”.

Silly fuckers. And can I just say how glad I am we got Tomiyasu and not Emerson Royal from them for more money…..👍

must admit it would be funny if Arteta dumped us, but we got Conte as a replacement.
(will of course would actually sign Bruce or some semi-successful from germany)

well, we do have a truck of successfully selling overrated, mediocree players (apart of TH) to them so we might let them have MA and remain in misery for quote some time.

They taped up Hleb when he was a key component of the midfield. A real technical outlet and as it turned out, only Wenger really appreciated how to use him.

These days modern managers would kill to have such an efficient player in Zone 14 who will never lose possession.

As if Barca doesn’t have enough problems already.
I can see him loaning out Ansu Fati and Gavi to Marseille for not subscribing to his non-negotiables (Unless they become Kia clients, off course)