Before this match, I looked up how Arsenal had performed in the 12:30 kickoffs because it always felt like a letdown. The numbers showed that since the 2014-15 season Arsenal had played 16 times at this kickoff time and won just 6 times, averaging just 1.4 points per match.

My intuition on how it felt to wake up at 4:30am my local time was correct, it was almost always a mistake but one that I kept doing. Knowing this before kickoff I was asking myself if I really wanted to subject myself to this match. Getting the first goal before the coffee had fully taken hold, and a second before the sun came up made things all the better. Holding on to keep the clean sheet made everything worthwhile and will make me really consider doing this again when Arsenal faces Newcastle in a couple weeks. 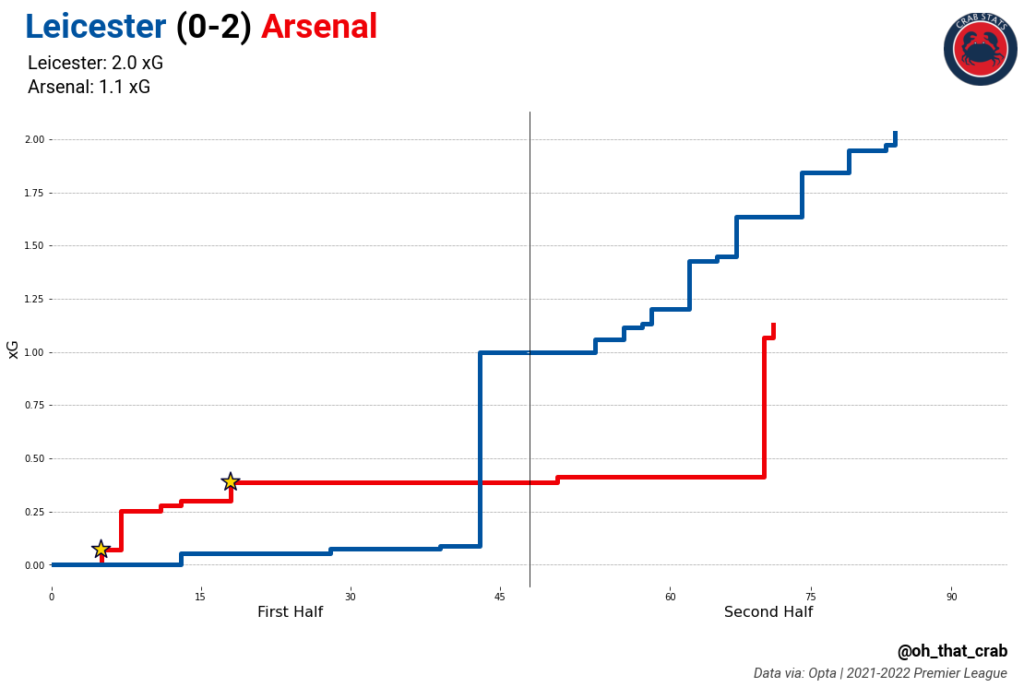 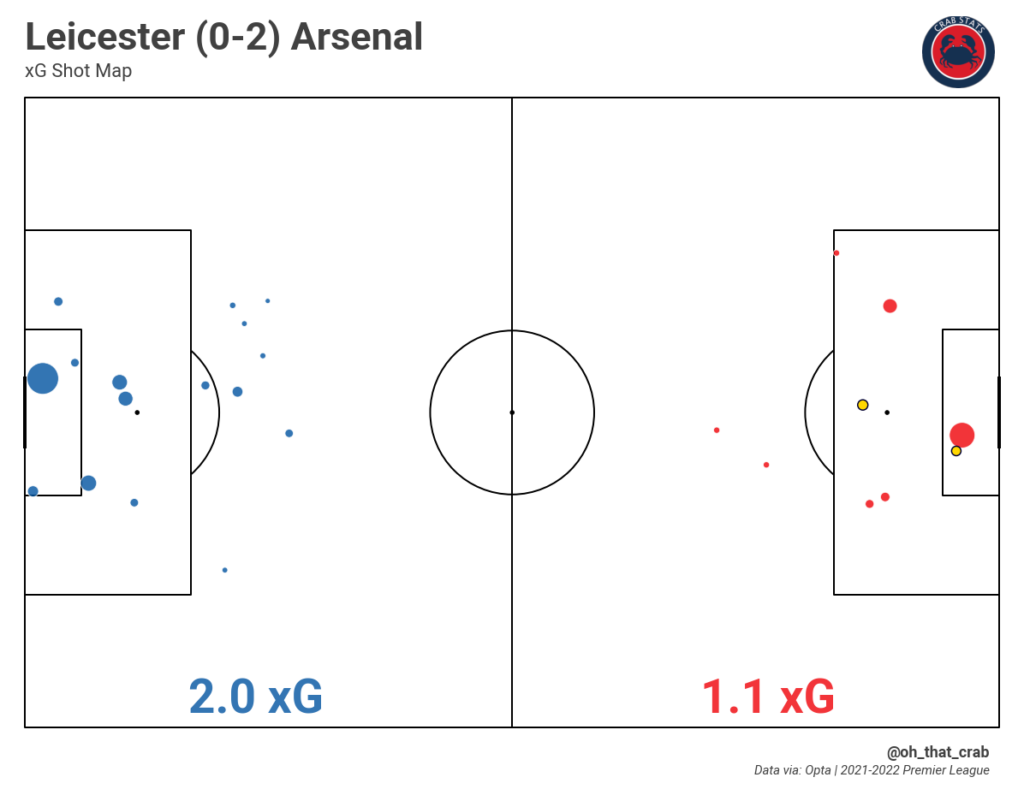 44% – Arsenal long pass (greater than 30 yards) completion rate in this match, Arsenal were 37 of 84 in their long passes. For players that tried more than 5, only Thomas Partey (7/11) and Ben White (5/7) completed more than half of their attempts. 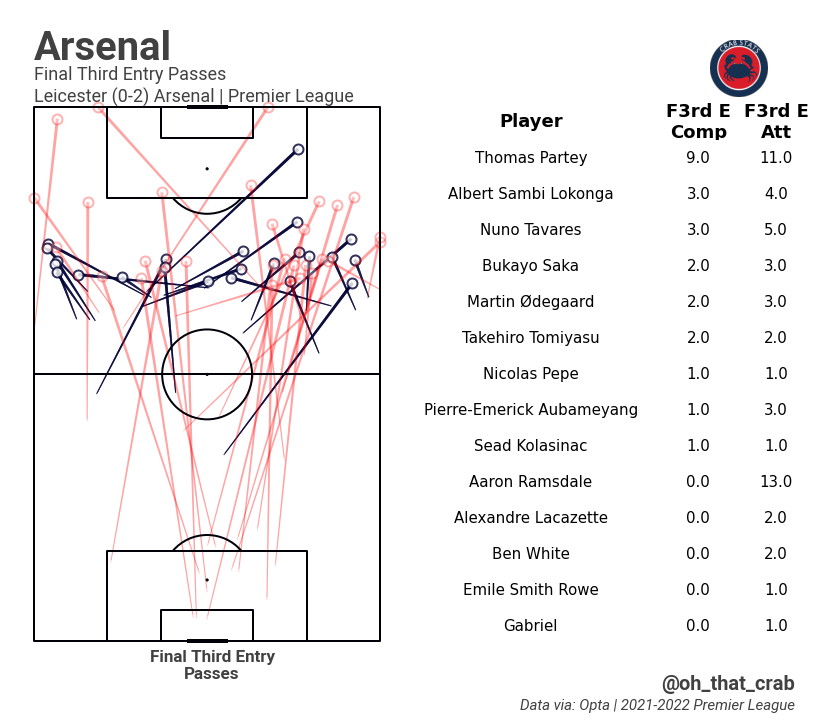 8 – Completed passes into the penalty box, 4 from open play tied for the second-fewest this season 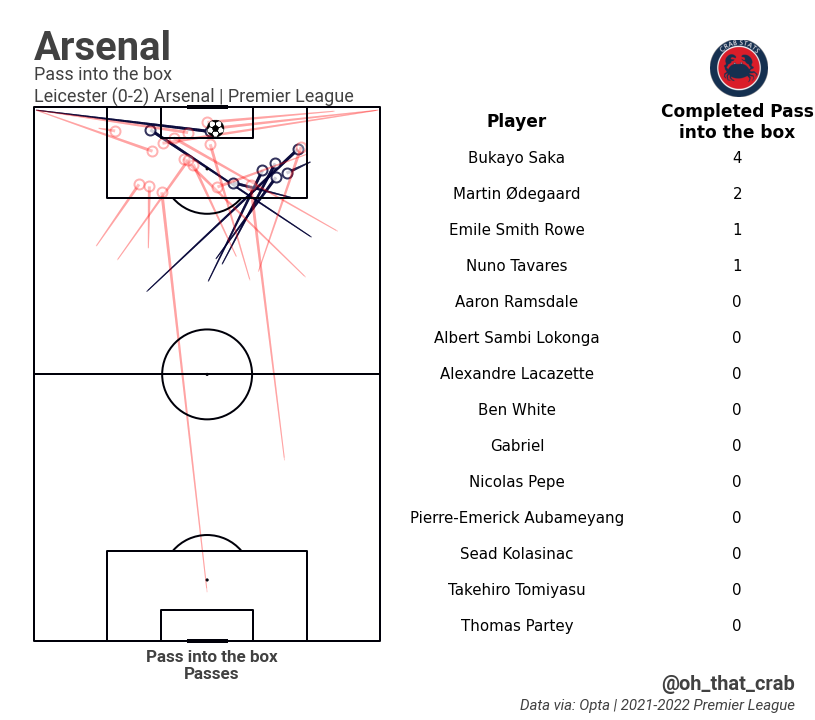 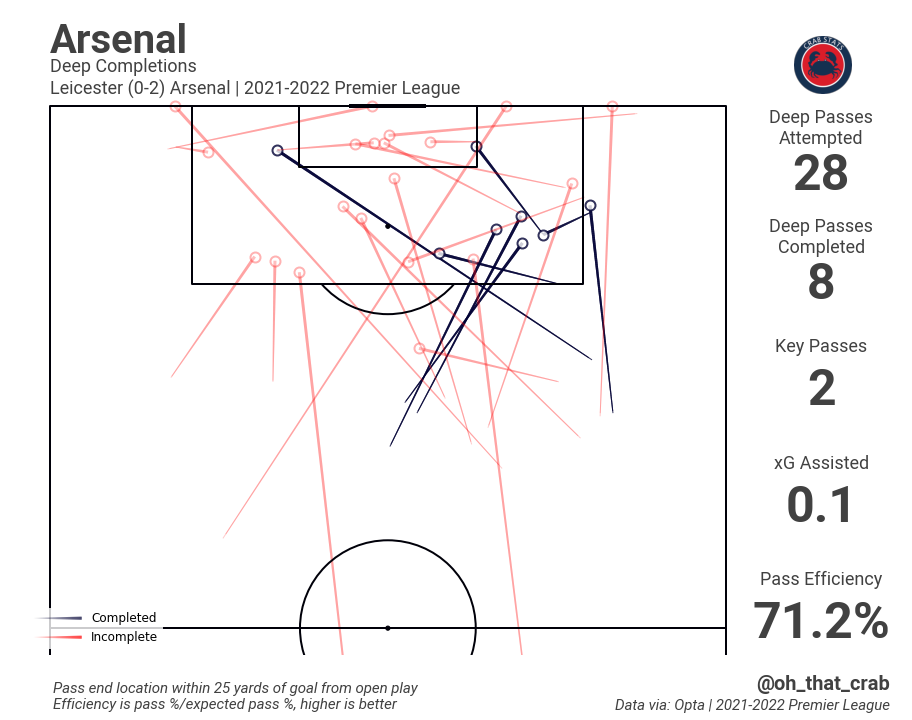 9 – Shots for Arsenal, 5 shots on target, 1.9 expected goals of the shots that Arsenal had on target.

In this match, Arsenal were a bit sloppy on the ball and disjointed. The passing networks in this match were not nearly as pretty as they have been over the last couple of matches. 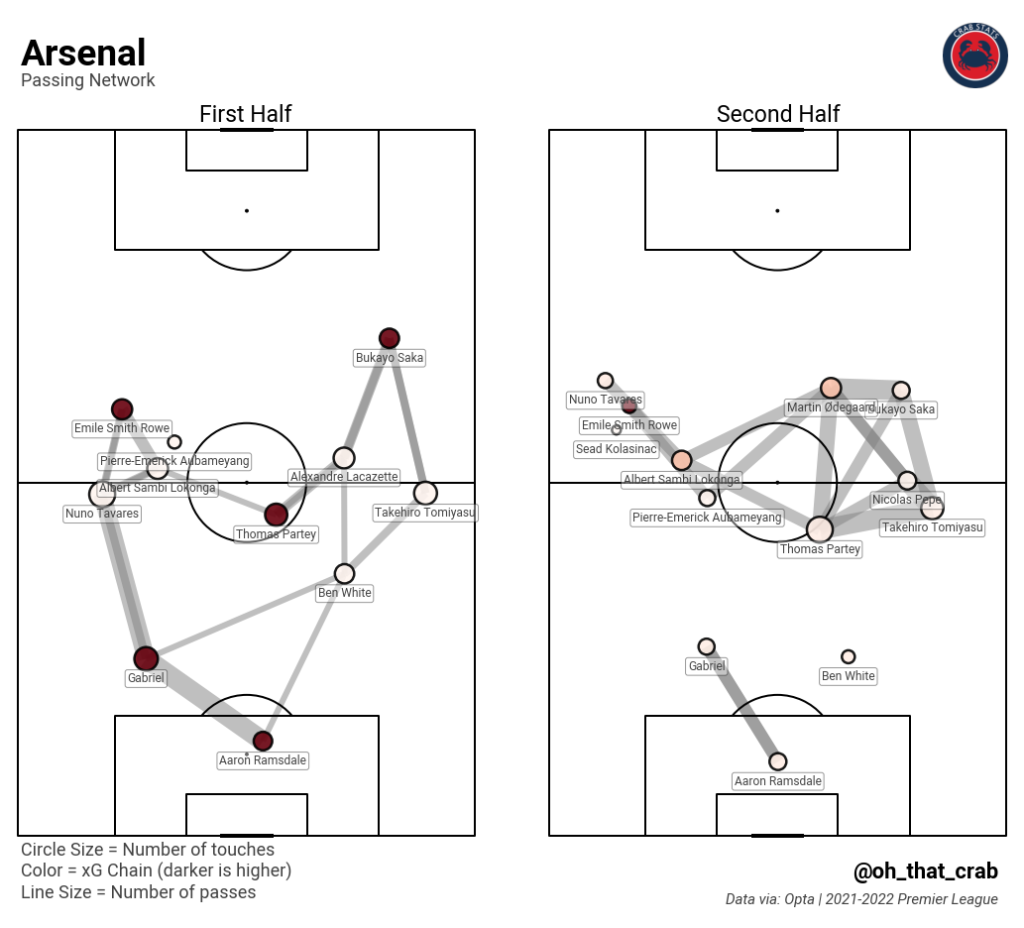 Too often in this match Arsenal seemed to resort to long speculative passes, rather than playing short and building towards the Leicester goal. This was not especially effective in this match with the ball too often coming right back at them. The three main forwards (Lacazette – 67.9%, Aubameyang – 38.3%, and Saka – 64.3%) all had less than 70% of the passes aimed their way completed.

The opening 20 minute period was pretty good for Arsenal but then Leicester got control of the match. In the opening 23 (first quarter) Arsenal dominated, they had 5 shots to 1, 32 final third passes to 16, 9 touches in the box to 1. For the rest of the match it was 15 to shots to 4, 130 final third passes to 54 and 24 touches in the box to 8 all in favor of Leicester. This match was in a way similar to what Arsenal did against Tottenham, just against a team that was better and actually created some threat to get back into things.

The score in this match probably dictated some of this, but it remains a concern that at times Arsenal can lose control for long stretches of matches.

57% – Probability of James Maddison’s free-kick of turning into a goal according to my post-shot expected goals model.

This was a day where Ramsdale’s shot-stopping saved Arsenal. This is the best single match in terms of expected goals saved and tied for the most saves that he has made in a match (he also had 8 against Leeds United last season and did it twice in League One.)

3 – Goals in the Premier League for Emile Smith Rowe, more than he had all of last season (2)

14 – Shots in the Premier League for Emile Smith Rowe, more than he had all of last season (13)

14 – Passes in the penalty area from open play in the Premier League for Emile Smith Rowe, tied for the same amount he had last season.

21 – Successful dribbles in the Premier League for Emile Smith Rowe, more than he had all of last season (7). While upping his success rate from 24% to 78%.

Tim Stillman wrote a great column on Smith Rowe this week (sort of stepping on my toes with the stats but still great) and I just wanted to echo some of the similar sentiments that he had. One of the things that Mikel Arteta talked about when Smith Rowe took the number 10 shirt was the expectation of end product that comes with that. I think that Smith Rowe has really taken that to heart with his play to start the year.

Sometimes that means that he has maybe been a little more selfish with the ball than perhaps he might of last season, but it also means that he has been much more progressive with his play. It was a bit of a conundrum with him last season, his influence on the team was pretty obvious watching him but the stats that he produced were a little on the underwhelming side, this year his influence is still as big but he is also producing things that look good on the stats sheet as well.

It is very nice to see the potential that he showed last season turn into end product this year.

Sources: Opta via whoscored, my own database. StatsBomb via FBRef.

Previous articleJonas Eidevall reacts to 3-0 semi final victory over Brighton
Next articleSaka: Arsenal can be proud of defensive efforts

I think scoring twice early meant we were happy to sit back and defend away from home, rather than take unnecessary risks and get done on the break.

Especially with Vardy on their side..

Part of me worries about that xG a bit. But I think if I were a Leicester fan, I couldn’t have too many complaints. Although we had to weather a first half of the second half storm, it was comfortably enough in the end. I do worry slightly about our tactics when a few goals up. In the Villa, Tottenham and Leicester games we let the opposition back in. I understand the caution but I do always ask myself “What would I rather play against if Arsenal were 2 goals down?” And almost always I’d hope the opposition backed off… Read more »

These numbers confirm what I was feeling from around the 25th minute on. I remember George Graham saying he was happy to have Seaman but it’s not a good sign if we have to rely on him. Super happy with the win but it’s still not a good sign that we keep letting teams back into it. Still, this is a young team and I hope we’ll soon iron out the problems.

Our new RAMBO saved the day Mehn I was so proud of my yesterday than I have been in a long time .COYG

Nice one as usual. The Thing ESR stat is really telling and we are not even midway through the season! Fingers crossed we can all keep fit! This season might surprise many a bit like Rambo!

The ESR stat is really telling *

A good rule of thumb is that if your goalie is having a stormer it’s because the game isn’t quite under control.

4 is another interesting number. I checked the first three PL matches we lost and only 4 of the current side played in each match.
So a big change in personnel, hopefully we keep winning and drawing with them.

17 I find is an interesting number

The most important numbers at this point are the ones in the goal column. Arsenal flew out of the block like Usain Bolt, and were 2 goals up by the 20th minute. After that, they were satisfied to sit back and protect their gains.
Whatever negative numbers we see is because of the setting above.
Leicester under Brendan Rogers is a different ball game entirely. United was torn to shreds a fortnight ago!
Kudos to Arsenal for leaving there with 3 massive points, 2 goals and a clean sheet!
Impressive.

We’ve just moved the clocks back one hour here in the UK.

So you’ll only be 7 hours behind until whenever you guys change yours.

It’s a cliche, but “there are two teams on the pitch.” I think Leicester’s improvement in the second half was *mostly* because Leicester, a very good side, played much better than in the first half. Yes, it was partly because of the score, and the natural tendency to sit back with a two-goal lead. But mostly it was Leicester. We beat a good side away by two goals. We needed some good work from our keeper (and one moment of superb brilliance), but Ramsdale is one of our players–his good play counts as part of our good performance, not as… Read more »

Anybody knows what is this huge xG on 43rd minute that WASNT A GOAL???

The Jonny Evans shot from two yards that followed up Ramsdale’s heroic save from the free-kick.
It’s fitting that he missed, given his foul play with the kick on Ramsdale, and that he deserved to be sent off twice in the game.

Hey Scott, always love the pieces, as numbers and analytics amaze me 🙂 Just one thing I wondered, sometimes there are multiple shots in a goal mouth scramble, or melee in the box – for example the Aubameyang penalty miss then goal from the rebound. It seems to skew the XG a little as there may be 3/4/5 shots in a sequence, but really there can only be one goal from that sequence. So if the first shot went in then the XG is lower, but really the result may be the same. Do you share this sentiment and is… Read more »