Arsenal booked a date at Wembley on Sunday, 5th December in the FA Cup Final against Chelsea with a comfortable 3-0 semi-final victory over Brighton at Meadow Park. The scores were level at half-time through a mixture of Brighton’s stubborn defending and some slightly wayward finishing but Arsenal made short work of the Seagulls in the second half.

I spoke to Jonas Eidevall about some of the adjustments his team made at half-time. “Two of the details we spoke about at half time was, firstly, to get more players into the area in crossing situations, the first goal was a nice example of that with Kim Little attacking. Brighton changed from pressing in a 442 to more of a 451 during the first half and that allowed us to put one of our attacking midfielders a little bit higher up, the two first goals were a consequence of that. It enabled us to have another player higher in the pocket and overload behind their full-back.”

Spoke to Jonas Eidevall yesterday about tactical tweaks he made at half time in yesterday's 3-0 win over Brighton, as well as Leah Williamson's form this season. pic.twitter.com/LA2otilMB0 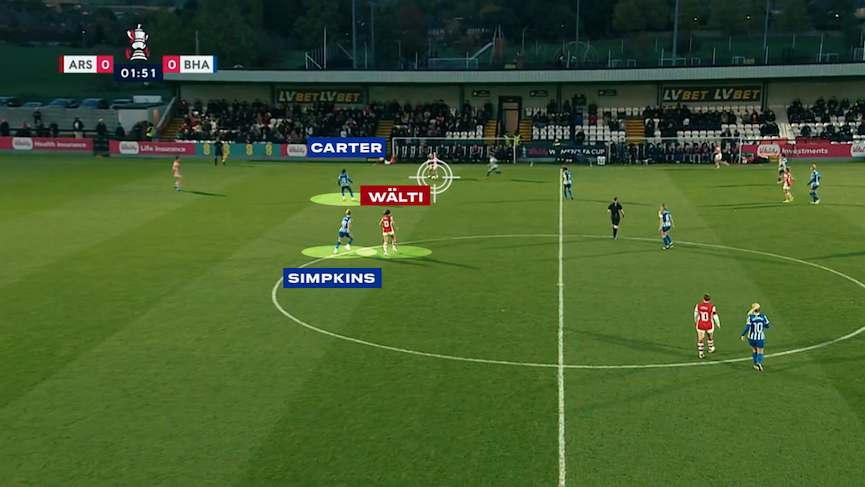 Here we see what Jonas was talking about in the first minute of the match, Emily Simpkins has pushed up alongside Danielle Carter as a second striker and you can see she is sticking close to Lia Wälti to block the passing lanes into her. 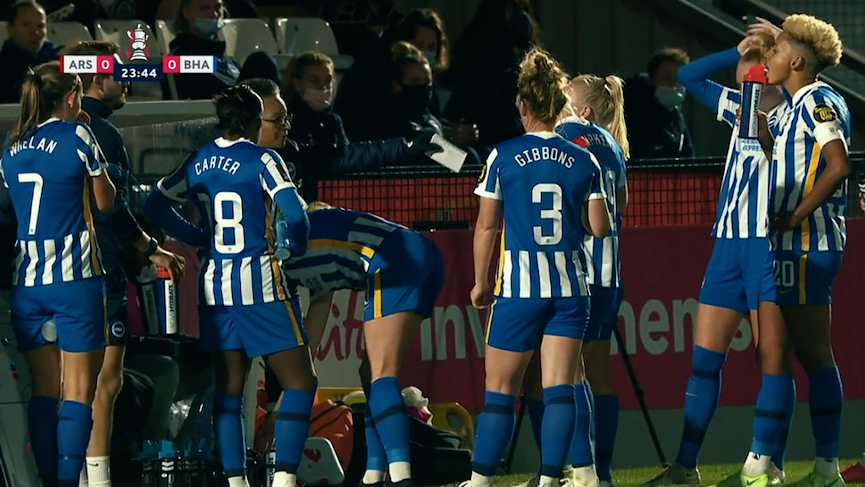 On 23 minutes, there is a stoppage for an injury and Hope Powell gathers some of her players together for a debrief. Here she is talking to Emily Simpkins. After this, we see a slight change in Brighton’s shape off the ball.

Incidents such as this one forced the change. Arsenal are happier to play over the top of the opposition press this season and Leah Williamson and Lia Wälti were able to simply loft the ball to the wings or into the area. 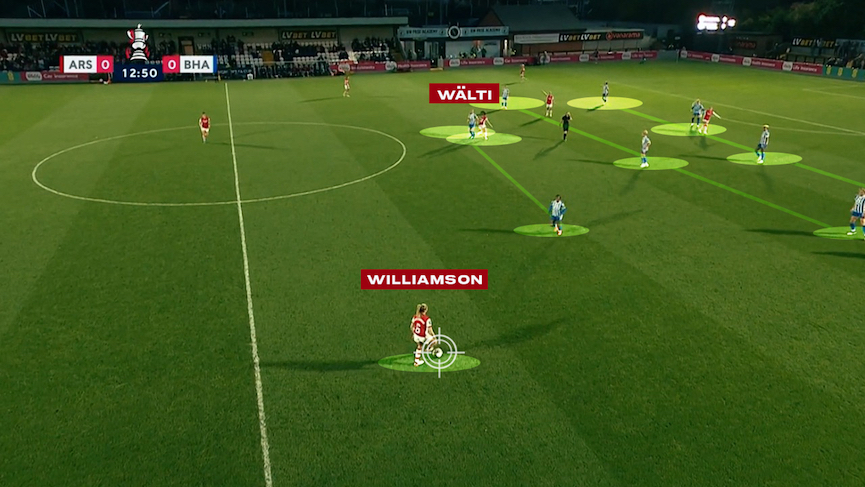 In the 12th minute, Brighton are setup in their 442 shape, cutting off the option for Leah Williamson to pass to Lia Wälti. 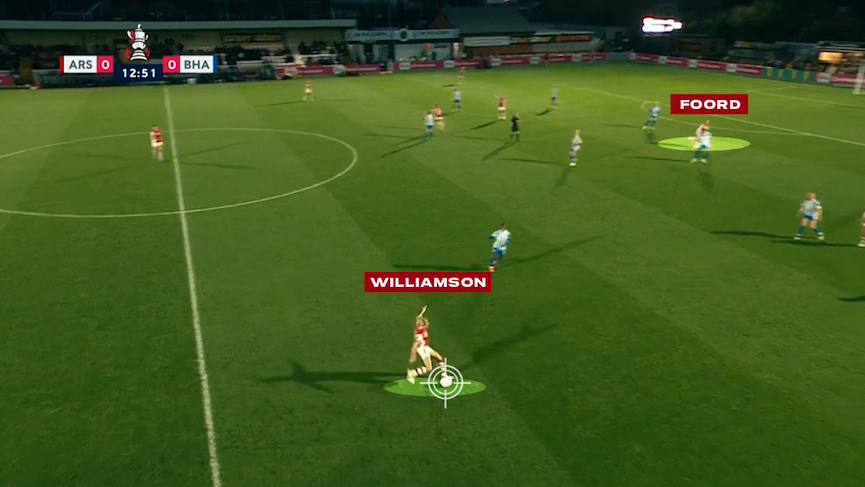 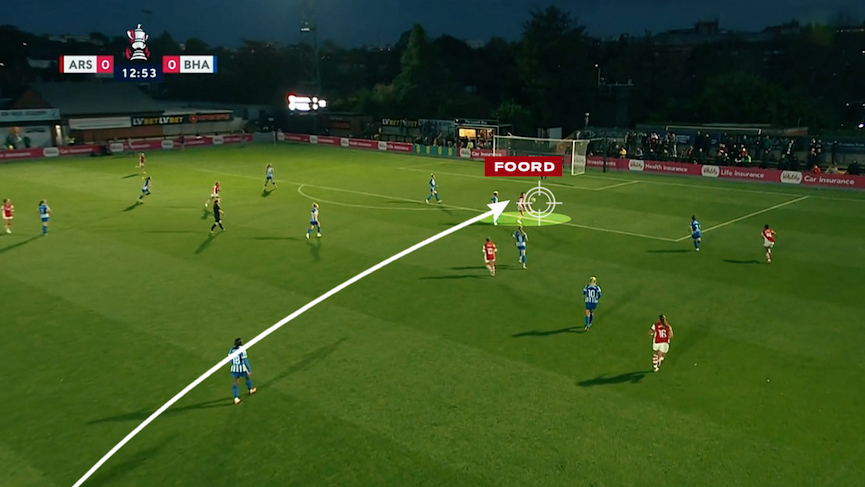 It doesn’t prove to be much of an obstacle for Williamson though and she simply lofts an inch perfect pass to Caitlin Foord on the edge of the penalty area. 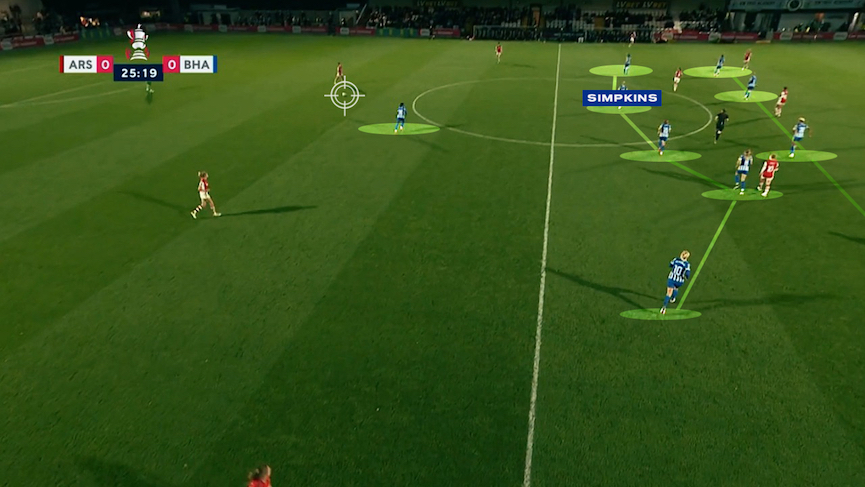 And here we see the adjustment. Now Simpkins has dropped back into midfield and Brighton have settled into a 451 shape. Their initial plan was to disrupt Arsenal’s build up but the long passing of the Leah / Lia combo has rendered that tactic redundant and now they want to congest the space between Arsenal’s midfield and attack. Arsenal have forced a retreat.

The upshot was that Arsenal had to move the ball wide a little more often and in the minutes after this adjustment from Brighton, Parris and Foord both head Maritz crosses just wide while Parris has a header cleared off the line by Victoria Williams. 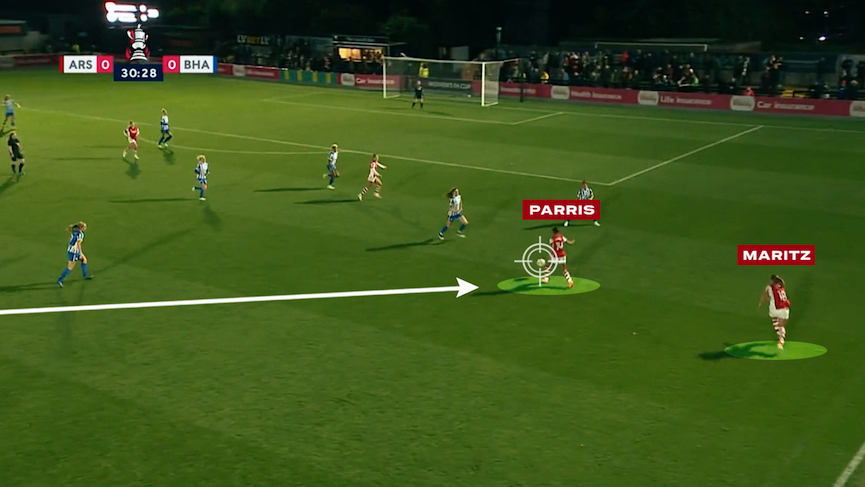 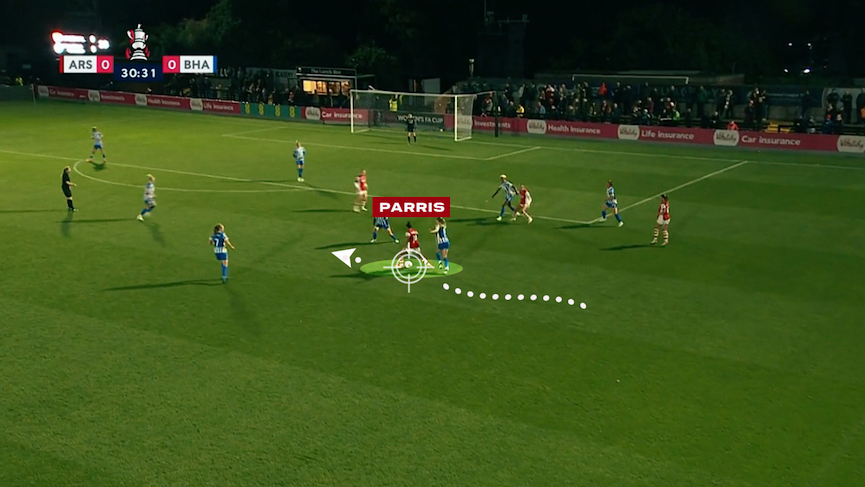 Here Leah Williamson feeds the ball to Parris on the right and she has a good overlap from Maritz on the right. However, there aren’t enough bodies in the box to make a cross an attractive option, so Parris instead moves inside into traffic. 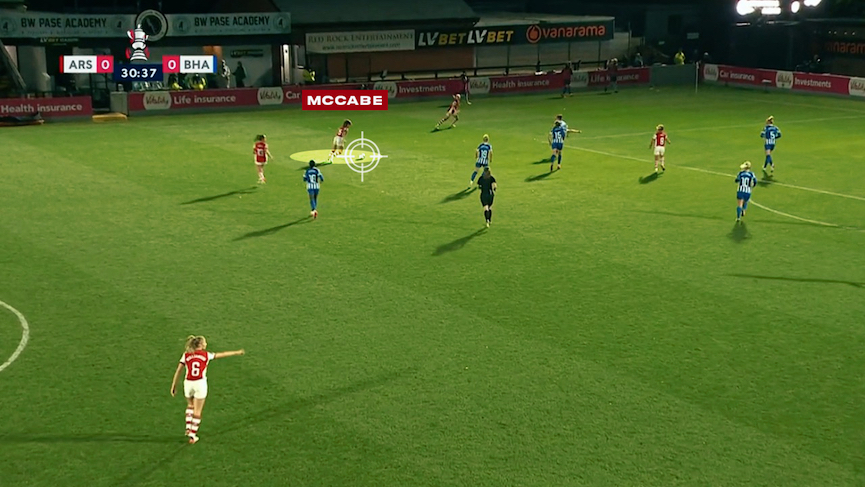 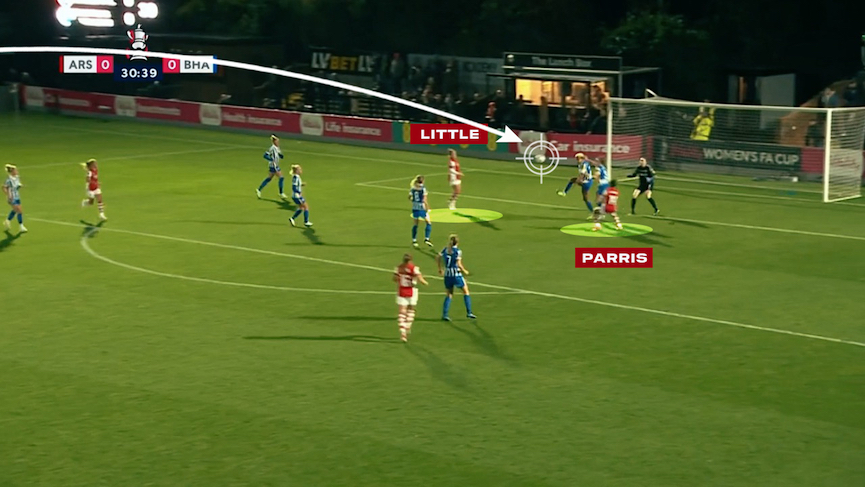 The ball does get worked to the other flank to McCabe but she only has Parris and Little to aim at among a sea of Brighton defenders. 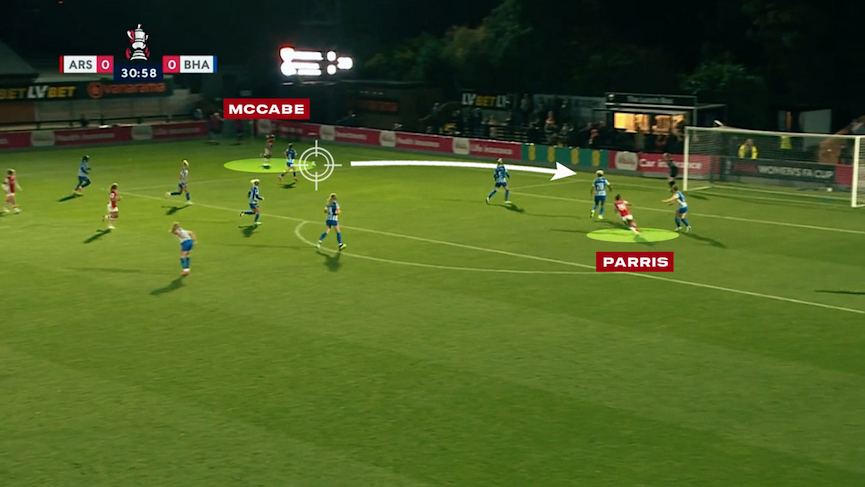 McCabe gets the ball out wide again and puts a cross in but only has Parris to aim at. This is why Jonas talked about getting an extra player in the area. It’s also why he wanted to create an overload on the left to tempt Brighton players away from the area and to make crosses and cutbacks from closer to the goal. 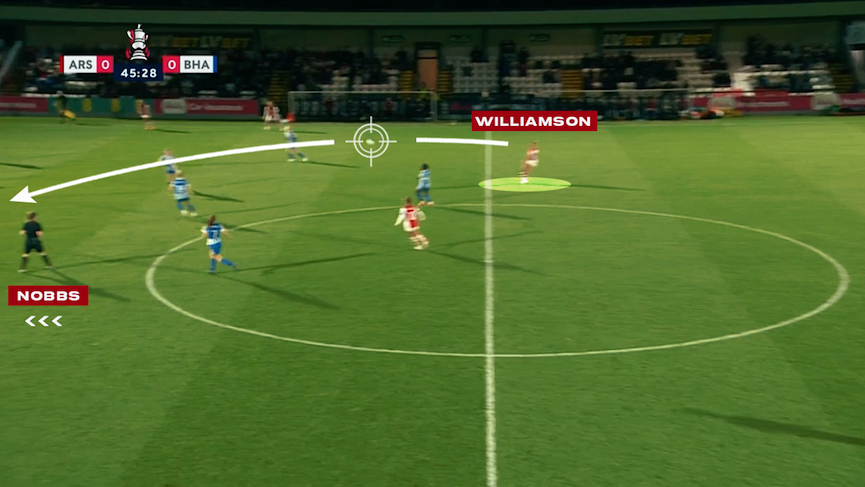 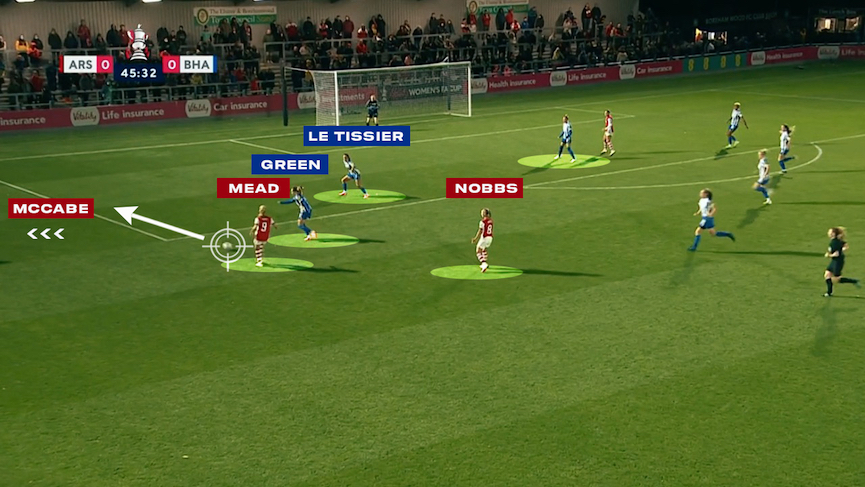 For Arsenal’s first attack of the half, Williamson pings the ball to the left and Nobbs, McCabe and Mead are all really close together. Le Tissier has already been dragged away from the middle of the area, while Green doesn’t know whether to stay wide or move in-field to support the defence. Their focus is on stopping the cross rather than defending it because it’s coming from a much more dangerous space. 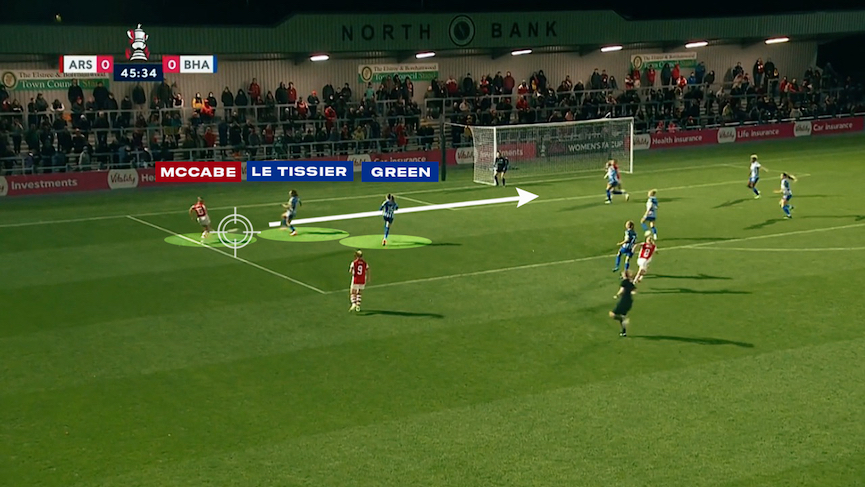 We can see a space has been created at the front post. On this occasion, nobody attacks that space but in a few minutes time, that space is created again… 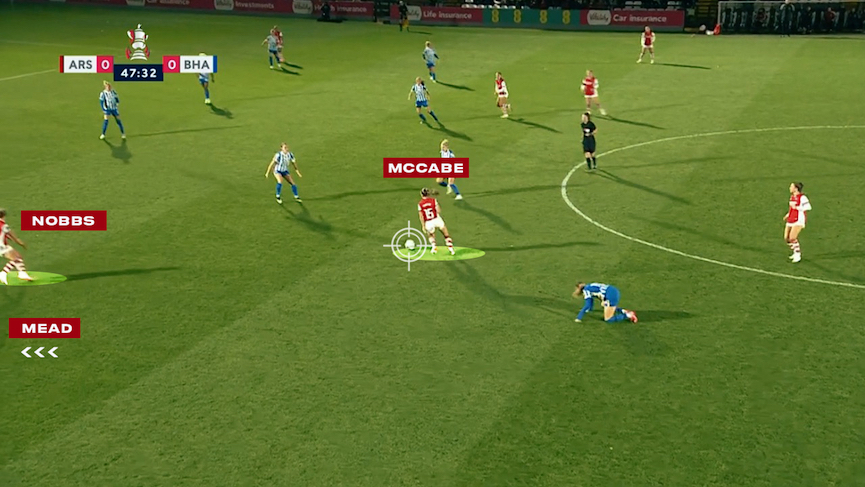 Here, Katie McCabe wins the ball inside Brighton’s half and she already has Nobbs and Mead to her left. 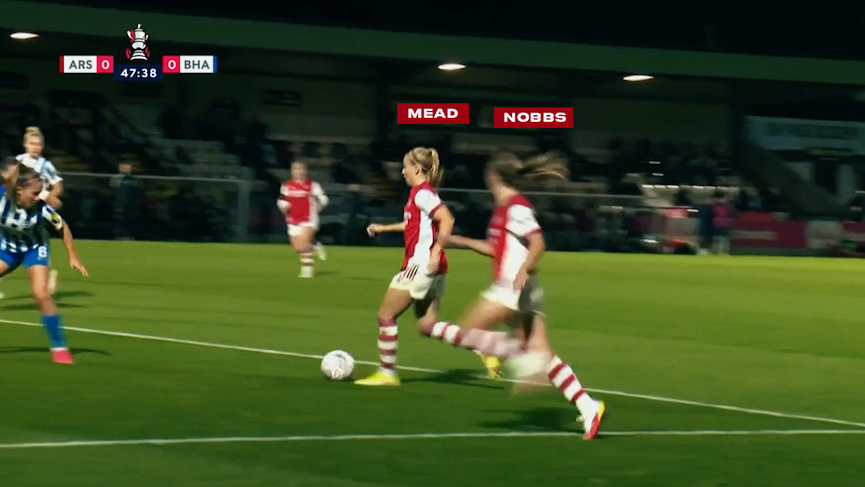 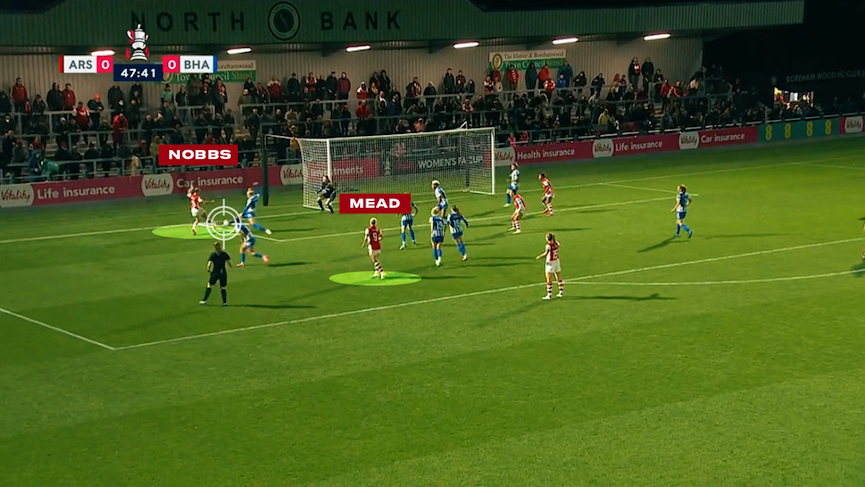 Nobbs provides an overlap for Mead and Brighton have to scramble the ball away because Arsenal are trying to get the ball into the area from much more advantageous areas and Brighton are being far more stretched. “It enabled us to have another player higher in the pocket and overload behind their full-back,” in Jonas’ words.

So for the first goal, what do we see? Left sided overload? Check. Gap created at Brighton’s front post as their defenders scramble to stop the cut back? Check. This time, Kim Little makes that front post run and Arsenal take the lead.

For the second goal, Arsenal again overload the left and create that same gap at Brighton’s front post. There is no run this time, so Beth Mead instead squeezes the ball through it and into the net.

It was a minor half-time adjustment but one that won Arsenal the tie.

Tough first half but great second half giving a clear win.

And no Miedema, so a chance to get better.

With hindsight Brighton would have been better off trying their luck continuing with 4-4-2, because at the beginning most of our chances fell to Keets and Caitlin, who haven’t found their form quite yet. Plus Caitlin is still probably jetlagged. After the change our focus went to Beth/Katie/Jordan triangle plus Kim running the channels. 3 of those 4 have been brilliant this season and Jordan is picking up her form in rapid speed. In reality we should have been ahead in the first half. We had a lot on chances/half chances where we missed the shot or the final ball.… Read more »

But…. that Kim Little goal….yazzaa, such quick thinking and agility…

It happens so fast but it was the # 1 choice to score and she did it with out hardly thinking.

the best player in the world – as she proved at the Olympics, where Team GB were so unlucky not to go on to take Gold

Good analysis (as always) Tim. I like our Arseblog reporter getting a “well spotted” by Eidevall for your question!

Thanks Tim, great job as always.

Hello Tim, and thanks once again for your tactical analysis.
I am interested in an Arsenal Women 2022 Wall Calendar, which I’m sure many supporters are. Can you advise on this, or have a word in the appropriate ears?

Hi Tim thanks for the excellent analysis. Could you please on one of your media channels explain Lia Wälti’s role on the field, generally not only in this game.

I really enjoy looking at the game analysis a day or so after watching the match at the ground. Its a real eye opener. One thing I’ve picked up is that, essentially “Jonas Ball” is very simple and adaptable. Initially I liked “Joe Ball” as in the first couple of years it won us a cup and league. After that, once Hayes and Co had worked it out “JoeBall” lacked adaptability or a plan B or C. Hopefully, “Jonas Ball” will continue to baffle Ms Hayes. Ps a lot was made of resting Viv plus LWM, Tobin and even Viki… Read more »