Prior to the West Ham game at Meadow Park, Arsenal coach Jonas Eidevall spoke about West Ham’s back three formation and their ability to overload in central areas. It stood to reason, therefore, for Arsenal to attack the spaces behind the wing-backs as the Gunners did countless times yesterday. When I asked Jonas about this post-match, his response was emphatic.

“Of course, any team playing a back three or five, the difference between those two formations is whether you attack behind the wing backs or not and, if you do, it transforms to a back five, which makes it way less aggressive. We forced that decision from the opponent.” So let’s have a look at what he’s talking about, shall we? 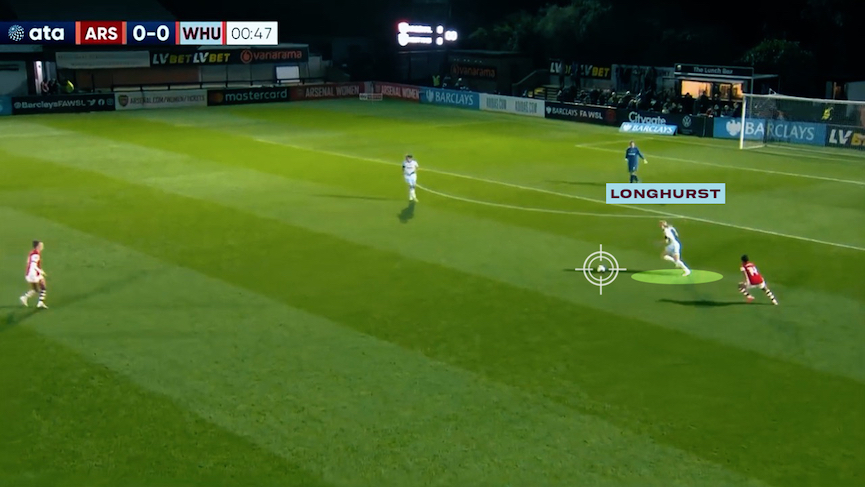 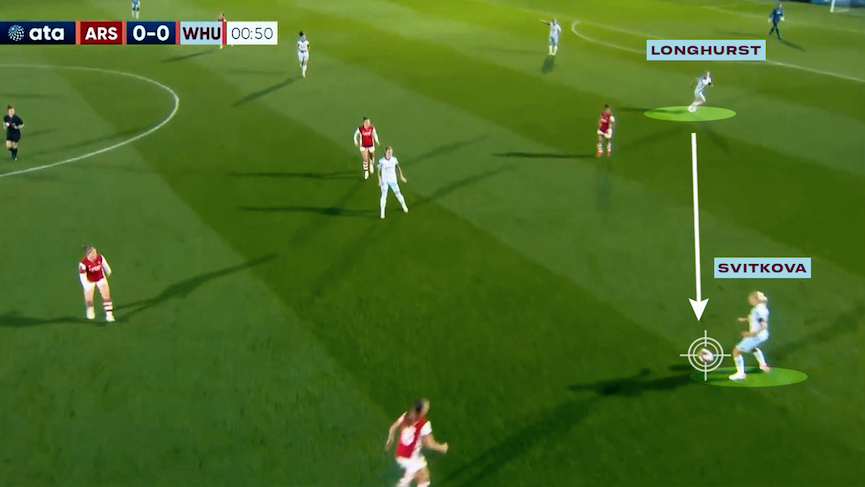 As Kate Longhurst, West Ham’s left-sided centre-half, chops inside and passes the ball to the left wing-back, Katerina Svitkova. Svitkova’s position is quite aggressive, it’s clear that she is a wing-back rather than a full-back. Arsenal’s dominance changes that pretty quickly, which I will come to later. But here are some examples of why it changes. 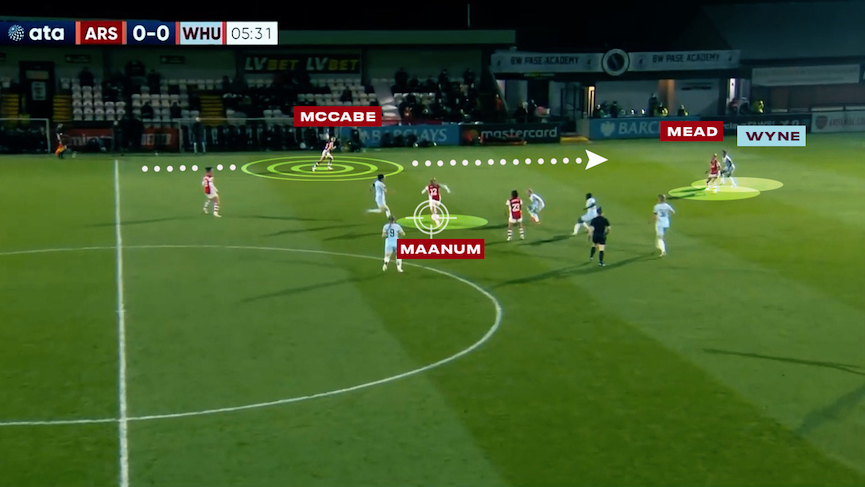 Frida Maanum collects the ball in midfield and West Ham have congested the centre but look at the space Katie McCabe has on the left. The right wing-back, Zaneta Wyne has been pinned by Beth Mead, leaving space for McCabe on the overlap. 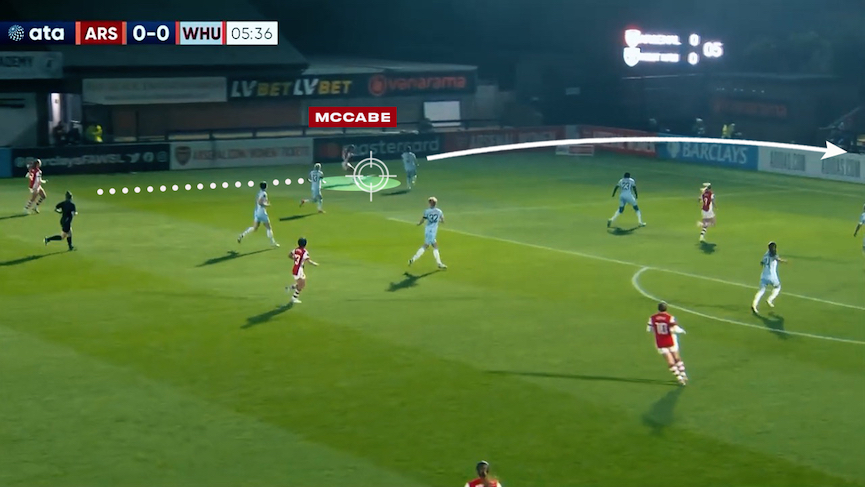 McCabe fires a cross in that Irons keeper Mackenzie Arnold deals with but it’s a flavour of what is to come. 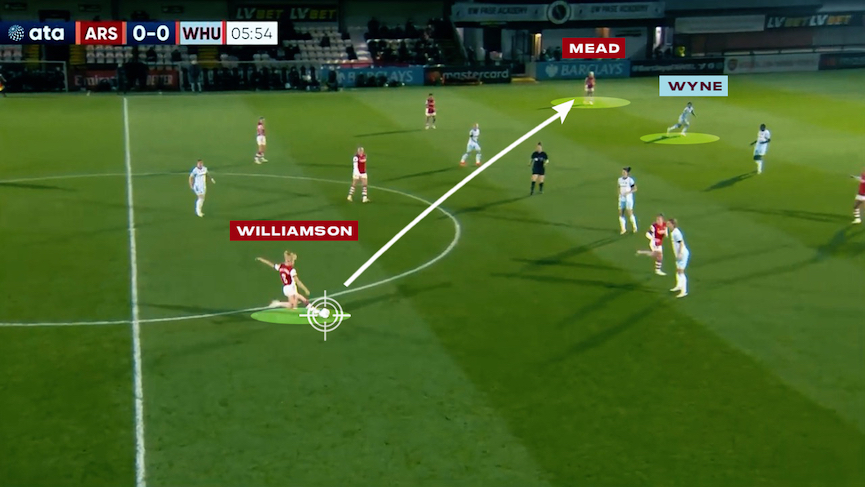 Arsenal used big diagonal switches of play to stretch West Ham and expose their wing-backs. Here we see a trademark Leah Williamson delivery to Beth Mead and you can already see Zaneta Wyne inching back. She knows it’s going to be a long night. 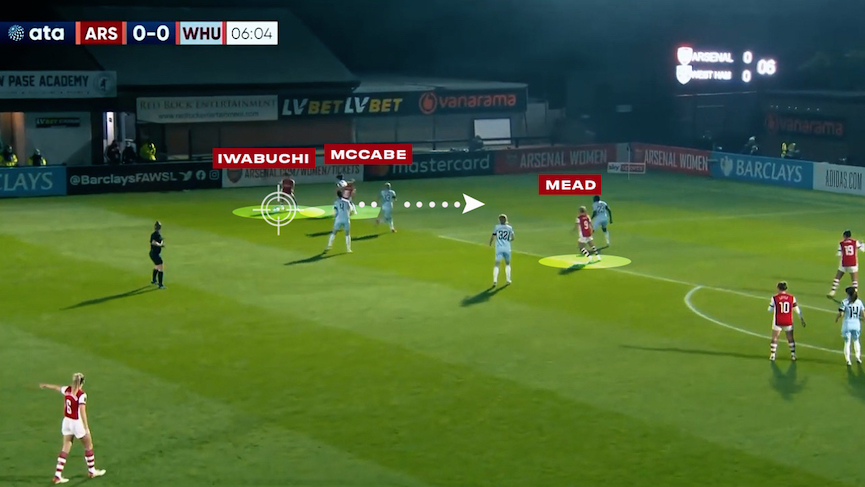 Mead and Iwabuchi trade passes on the left while Katie McCabe again provides an overlap. West Ham have numbers back but they are all busy! 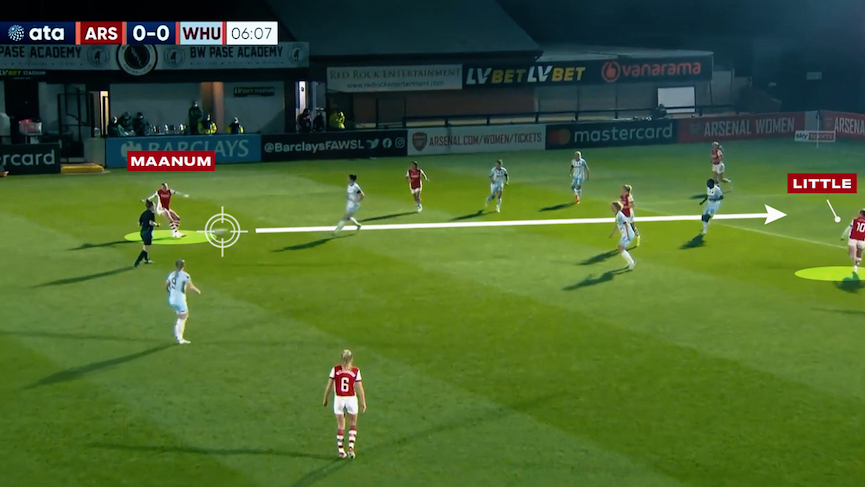 Iwabuchi decides to go back to Maanum and the West Ham defenders relax for a second and they haven’t noticed Kim Little (just out of shot) slip into that channel. Maanum has and plays an excellent line breaking pass to her. 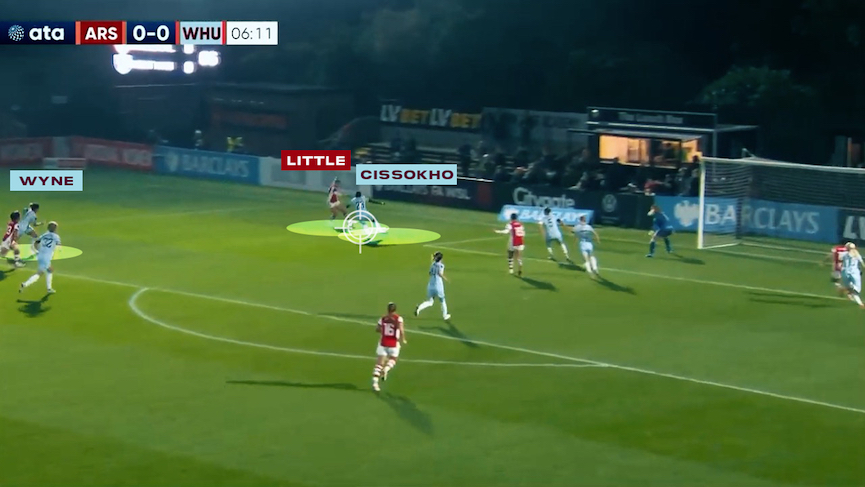 Little gets the ball in a dangerous position as a result. Cissokho and Wyne combine to her cut back on this occasion and, panicked, Wyne kicks for touch. Arsenal are stating their intentions to attack behind the wing-backs. 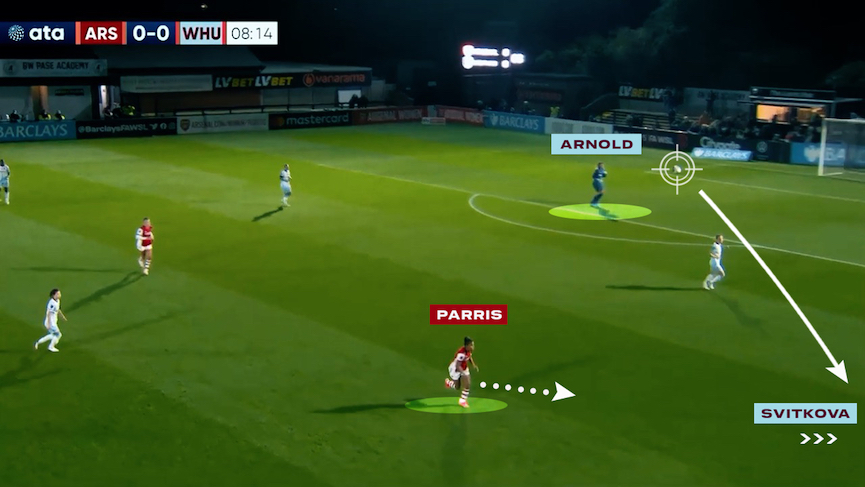 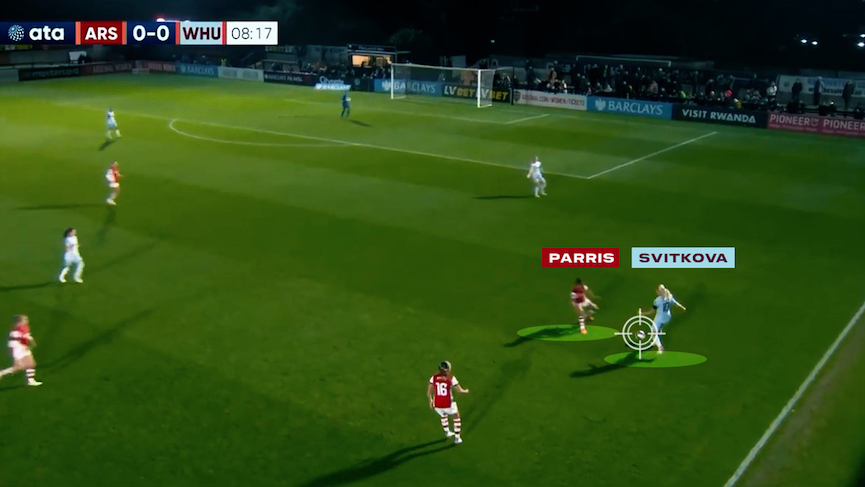 It’s not just attacking behind the full-backs that caused West Ham to retreat, Arsenal’s pressing also gave West Ham no exit points. As Mackenzie Arnold floats the ball out to Svitkova, Nikita Parris is straight onto her and the Irons get a throw due to Parris’ interception. 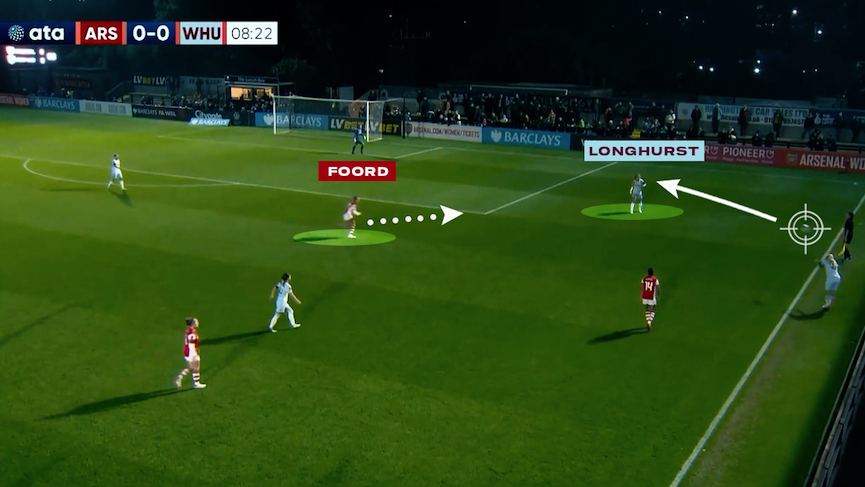 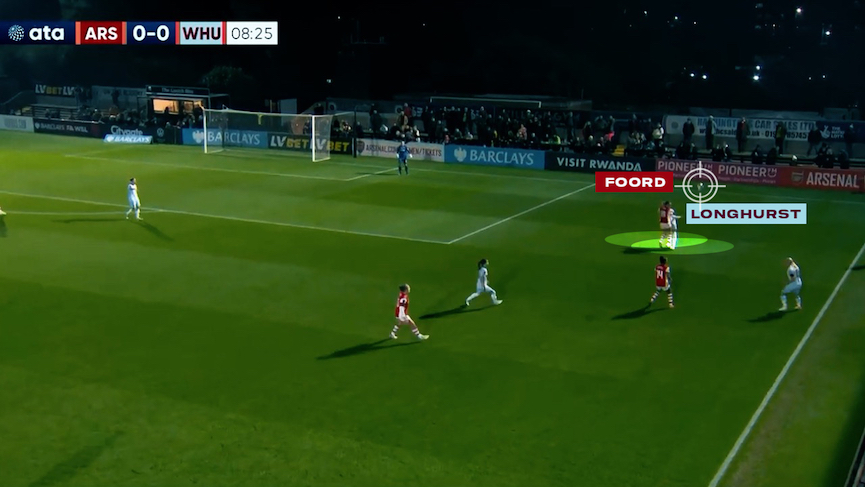 From the resulting throw-in, look at how quick Caitlin Foord is to harass Kate Longhurst in possession and she has to kick for touch. Now Arsenal have a throw-in deep in West Ham territory. Arsenal simply suffocated their opponents, forcing them backwards, which is why they offered little to no attacking threat in the game. 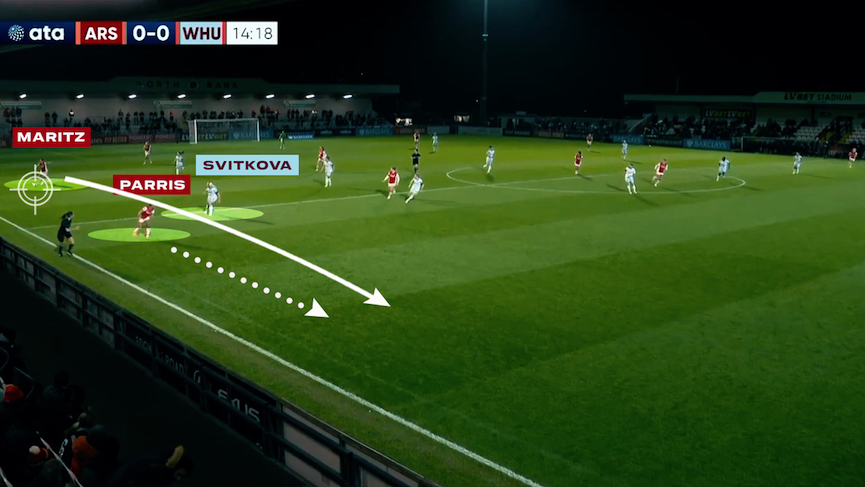 Arsenal aim to expose West Ham out wide again as Noelle Maritz lofts a long pass over the top of Svitkova and into the path of Nikita Parris. 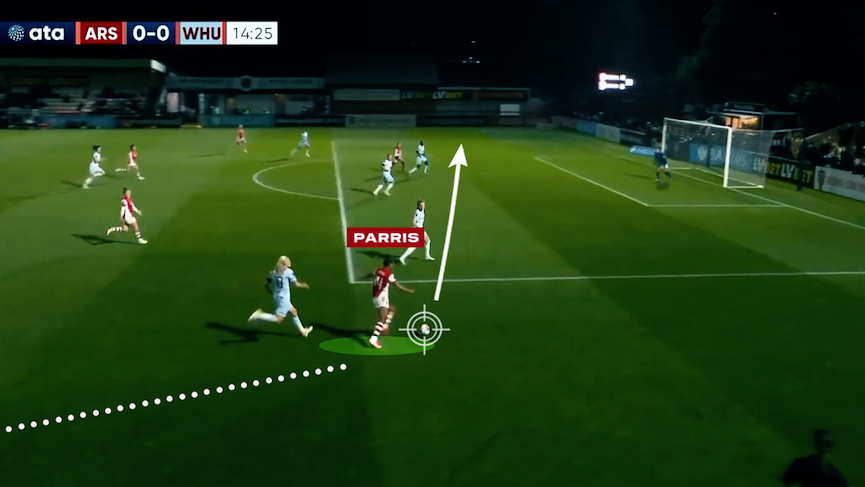 Parris overhits the cross on this occasion but, again, Arsenal have taken the wing-back out of the equation by attacking the wide spaces aggressively. 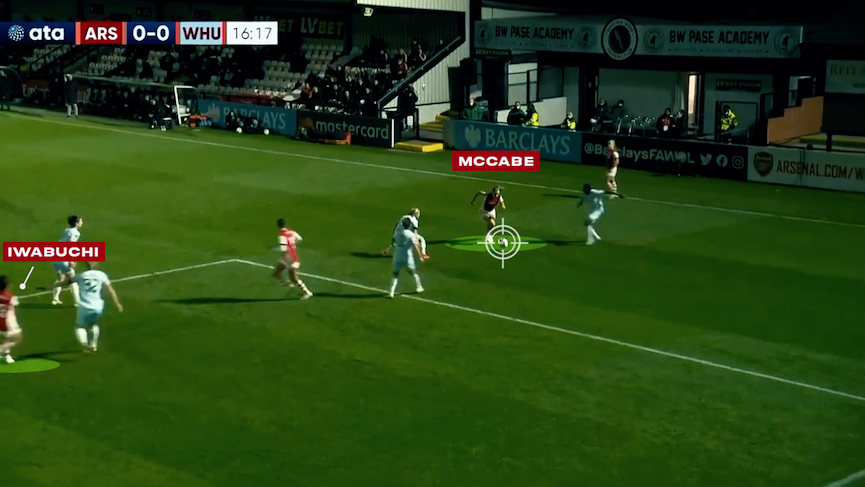 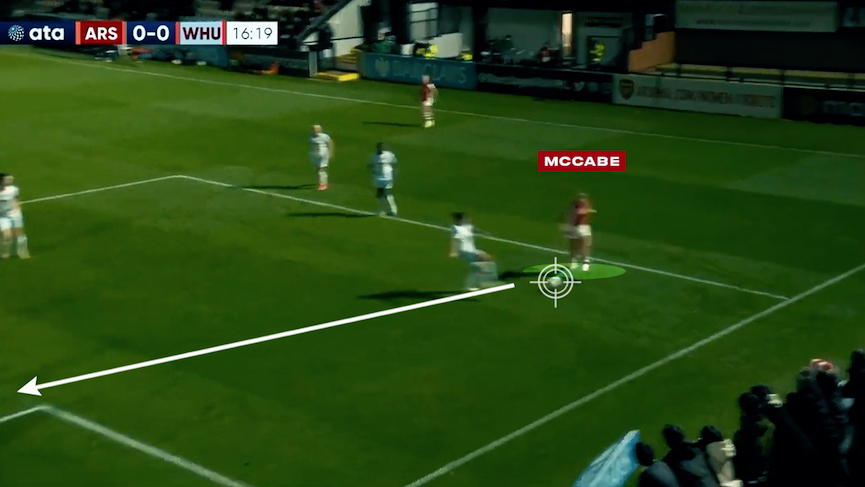 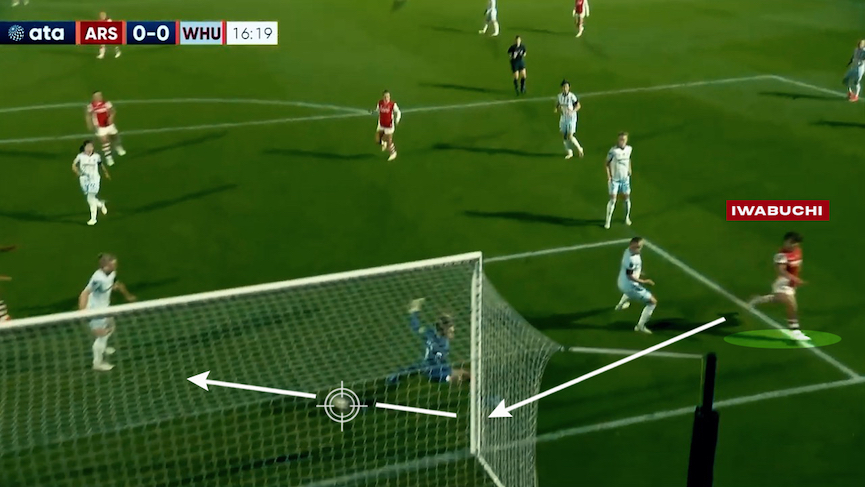 Arsenal create a big chance on 16 minutes as McCabe drives down the flank and puts a cross into Iwabuchi, whose front post flick clips the post. 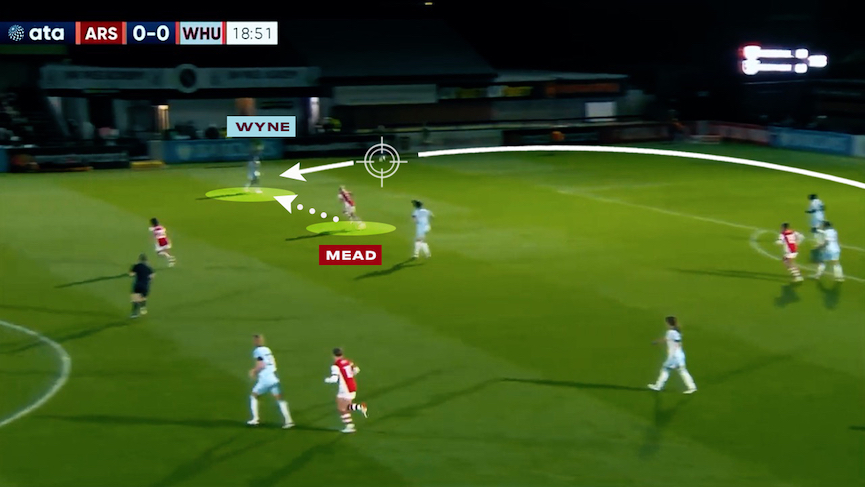 When Mackenzie Arnold wants to play out to Zaneta Wyne after around 15 minutes of concerted Arsenal pressure, look at how much closer to her own goal she is compared to earlier in the game. 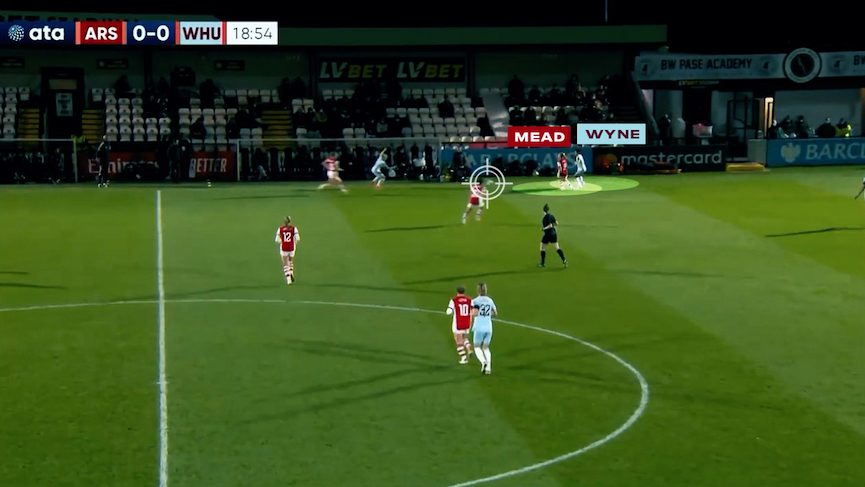 Beth Mead is straight onto Wyne, who passes the ball out of play in a hurry. Arsenal have essentially exhausted the wing-backs already, who can’t progress the ball to the halfway line, let alone get over it themselves by this stage. 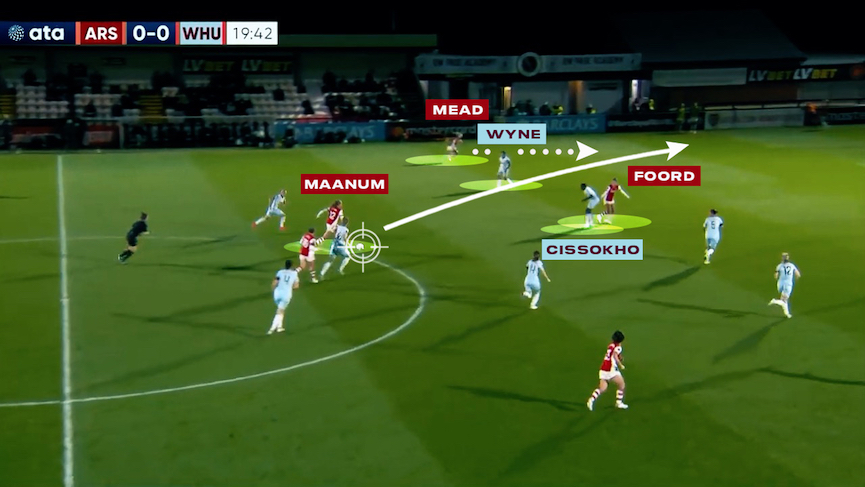 West Ham come under attack on their right flank again just minutes later. Williamson and Maanum play out smartly from the back and Maanum scoops a wonderful pass behind Wyne to the run of Beth Mead, with Foord occupying Cissokho. 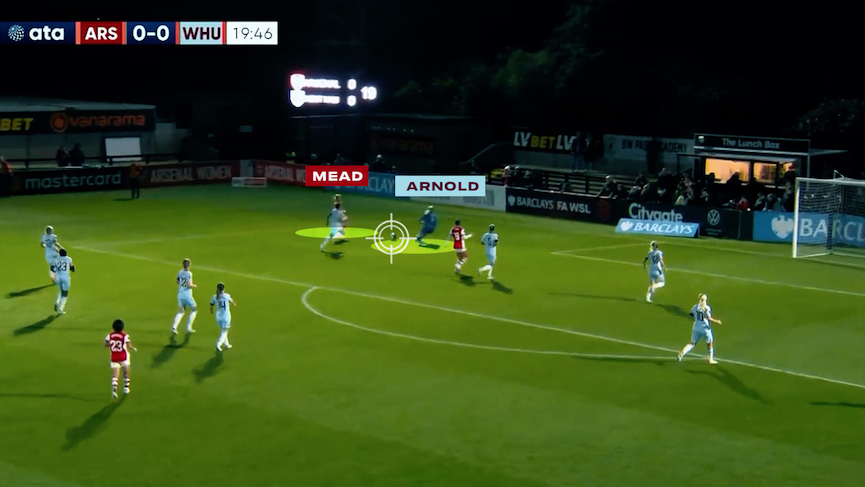 Mackenzie Arnold is out just in time to intercept and Arsenal get a corner. 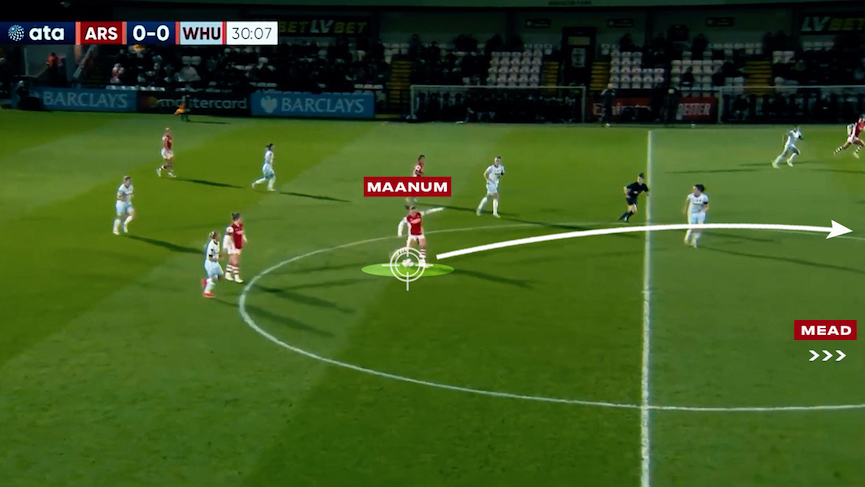 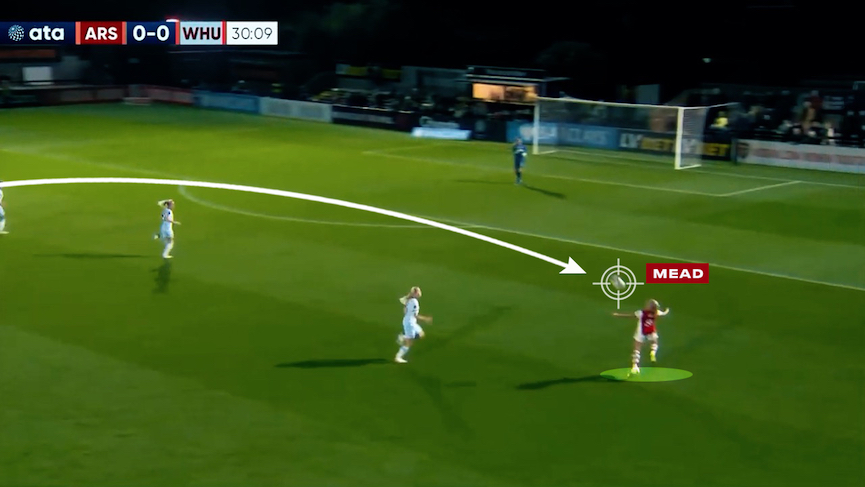 Arsenal’s next big chance comes from another switch of play from Frida Maanum, who finds Beth Mead, who has moved to the right flank for now. In his pre West Ham press conference, Eidevall said of one of his early training sessions, “We were doing a 1 v 1 exercise and she put her foot on the ball and passed backwards and I told her I never want to see that again.” 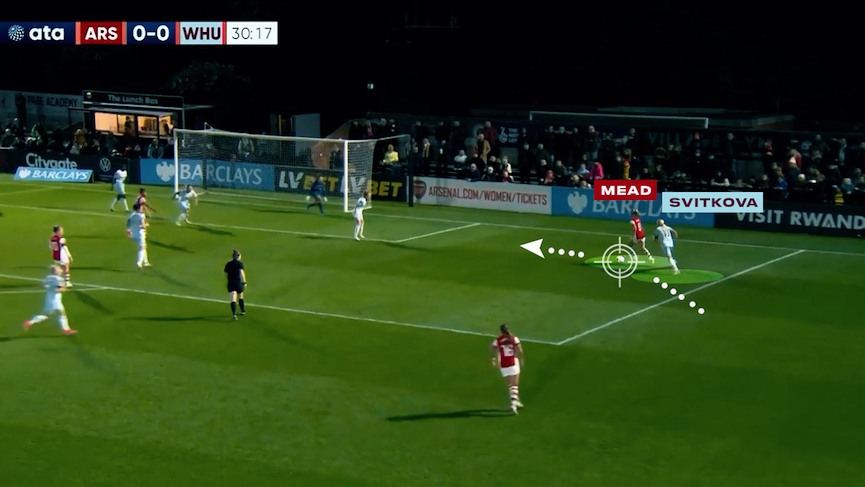 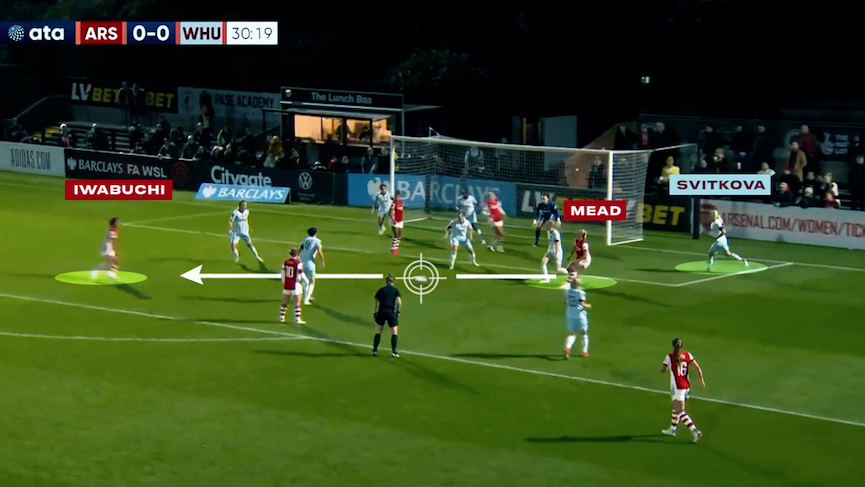 She powers passed Svitkova and tees up Iwabuchi, who shoots just wide when she should have scored. 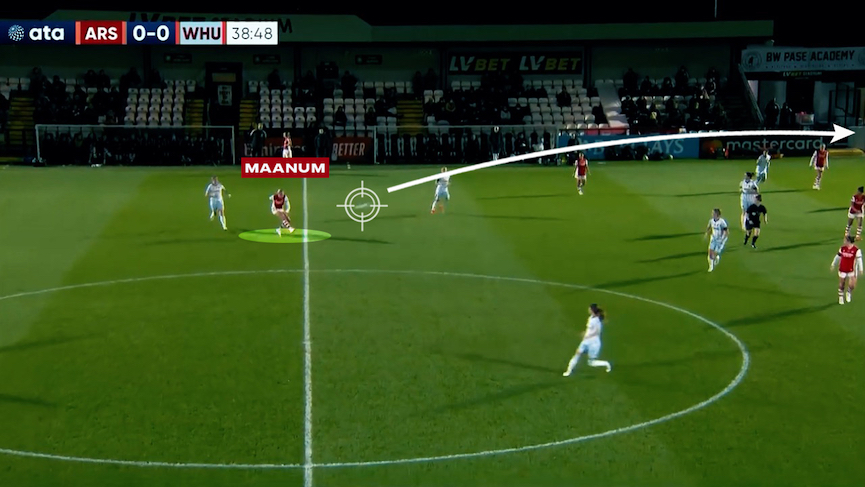 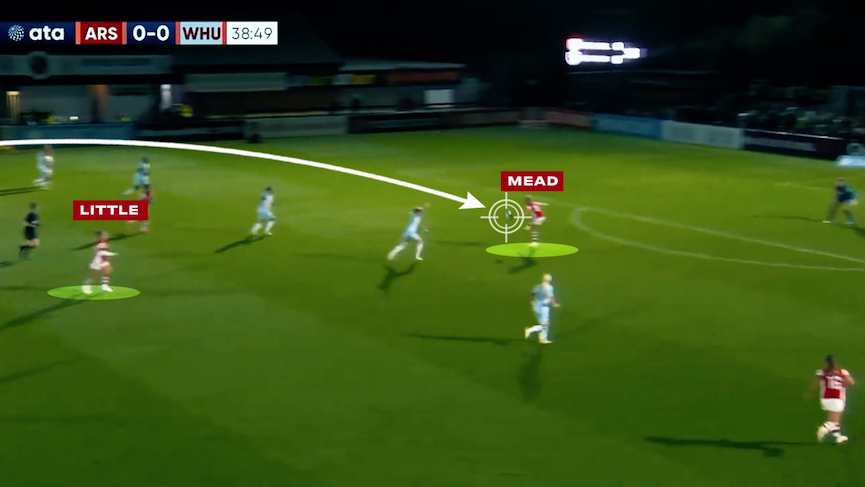 The first goal, ironically I guess, actually comes from a much more central move but, once again, Frida Maanum’s ability to switch play comes to the fore. Look at this outstanding switch to Beth Mead behind the West Ham backline that leads to Kim Little’s opener. 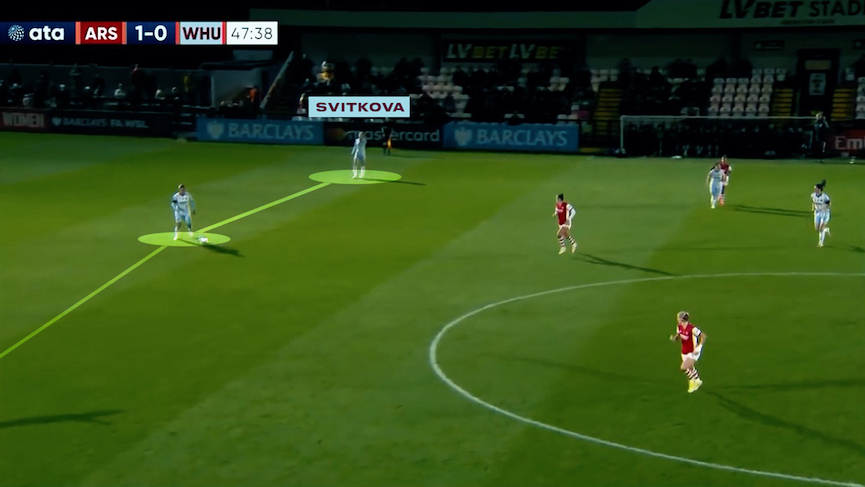 The second half sees no change in pattern. As West Ham enjoy some rare, unpressured possession at the back, look at the position of Svitkova. She is in line with her central defender, she has dropped back totally. 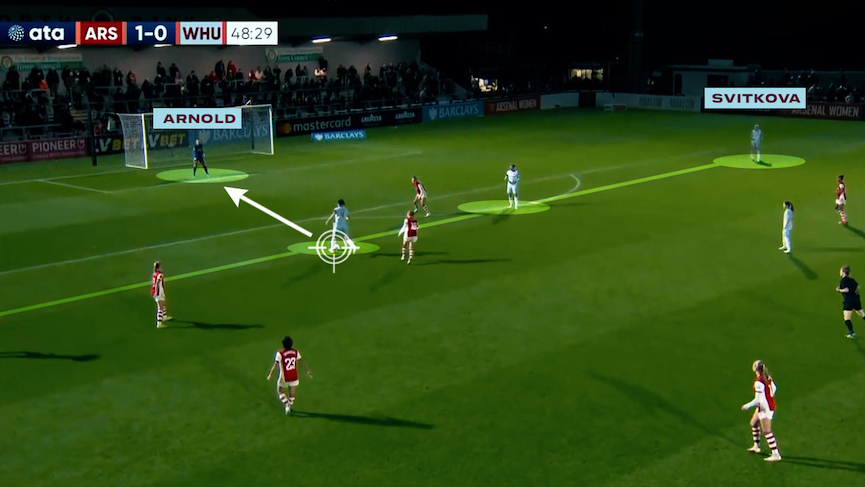 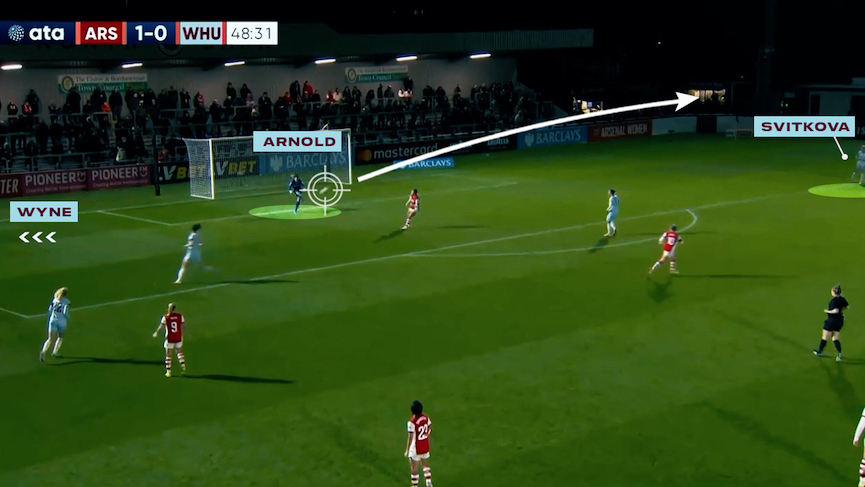 They work the ball out to Mackenzie Arnold, who opts to kick the ball forward as far and as quickly as possible. Her wing-backs are no longer offering an outlet, they have retreated in line with the centre-halves.

The second goal is the encapsulation of Arsenal’s approach because it comes from attacking a wide area after successfully forcing a high turnover. Mackenzie Arnold does try to play out this time and Arsenal simply swarm the Irons players into surrendering possession. Parris tees up Little and the captain does the rest.

The moment Kim Little scored her 50th league goal… and what better place to do it than in front of the @ArsenalWFC fans at Meadow Park! 🔥

Hoping for an Invincibles season!

Correct me if I’m wrong, but Maanum didn’t have these long balls when she joined. It’s nice to see her develop especially for such a young player. This also adds to the number of players who can launch a counter attack with just one pass from our defensive 3rd – Leah is the most common source but Lia, LWM and Jen can spray those passes too.

Fridas best game for us for sure. I think she is now better adjusted to the new league and team and as result she can now better display her full talents. Very impressed by her composure, the distribution was top notch, crisp passes and good range to them. And the team seems to trust her more and more with the ball. Some raised concerns early season about cover for Lia but I think we can leave that past us now. Immense game from her.

I guess the question is where is her best position, and what is our strongest midfield trio.

I believe frida had like around 20 goals from 80+ games at her former club Linköping? I’m guessing that’s the kind of goal threat Jonas would want to capitalize on. Sure will be interesting to see how Jonas will mix it up when Nobbs gets back to her best. But so far against tough opponents the preferred line up has been Kim, Frida and Lia, if I recall the games against city, chelski and Barcelona right. But I kind of like when we go aggressive and throw in Mana there as well, at least against defensive teams, such a classy… Read more »

She’s had those passes definitely. Except she’s been assigned different roles most of the time. Think the Chelsea match is her best performance so far though it doesn’t seem eye-catching. Gave us the physical presence that we’ve always missed against the big teams and a technical quality that I think only her could execute it well of all our MFs( not downplaying any of the other)

Great analysis as always. On a point secondary to the main point of your article, I have to respectfully disagree with your comment about the 30:19 scene that Iwabuchi shot “just wide when she should have scored”. Her left side was blocked by the immediate defender, right side was cut off by Flaherty standing mid-way, and Arnold and Cissoko were standing in the middle near the goal line, as you’d see in the replay view from behind the goal. There was very little shot angle — you see Flaherty dodging away as the shot was about to touch her right… Read more »

Yessss!!! Thanks for pointing out Maanum’s brilliant passing, I noticed that too, especially in the build-up to that first goal. What a squad, what an embarrassment of riches.

The Hammers started quite brightly and had the clear intention to be aggressive, but we had their number.
Also, I love the action shot of Maanum at the top of the article.

Really loving our aggresivity. Think there was a sequence, 28 or 38 minute into the game when Foord took a long shot and three arsenal players where first in for a rebound. Can’t get that beautiful image out of my head.

My routine is to study Tim’s analysis a couple of days after the game following a re-run or two of the action. Frida is really integrating into the team well. Choosing A POTM is becoming very hard. Kim got the accolade Sunday although it could so easily have been Frida or a few others. Although she’s not finding the net, I felt this was Keets best game yet. She battled, pressed and ran continuously and was instrumental in Kim’s second and her run and pass made it easy for Beth to finish. Ps Keets nicked the ball but the “assist”… Read more »