THE LOWDOWN
Arsenal face West Ham in the WSL at Meadow Park on Sunday aiming to preserve their status at the top of the table. The Gunners have made a perfect start to the season in the league and will aim to keep it that way during a congested period, which will see them face Spurs and Manchester United in the WSL as well as a double header against FC Koge in the Champions League.

Jonas Eidevall will once again look to rotate his squad for this period with Lotte Wubben-Moy, Vivianne Miedema and Tobin Heath all returning having been given some time off last week. With an FA Cup Final also in the bag, October could scarcely have gone better for Arsenal, with Eidevall scooping up the October manager of the month award, while Katie McCabe won player and goal of the month in an Arsenal clean sweep.

And we’re going to need your support! ❤️

Oli Harder’s West Ham will come with a game plan to press Arsenal in possession with a back three for extra security. They were 2-0 victors at Manchester City in their last away match so the Gunners will not want to take the visitors lightly. Irons boss Oli Harder has been impressed by the impact Jonas Eidevall has had on the team.

“I wouldn’t say he has transformed Arsenal but certainly taken them to another gear. I have a lot of respect in regards to what he is doing and has done before,” Harder said in his Friday press conference. “It’s exciting for me as a manager as well to go up against quality managers. We want to go out and affect the game where we can. We’re not a passive team. There are times when we have to defend a little deeper.”

TEAM NEWS
Vivianne Miedema, Lotte Wubben Moy and Tobin Heath all return after being given a week off to rest. Steph Catley returns after “a small issue” kept her out of the 3-0 win over Brighton last weekend. Viki Schnaderbeck could also return to the squad after a muscle injury. Malin Gut (ACL) is unavailable and Leah Williamson was not in the most recent set of training photos, though no injury issue is public yet.

A WORD FROM THE BOSS
“I remember one of the first training sessions we had, there was a transitional opportunity, a one v one in the penalty area and Beth put her foot on the ball and then passed back. I told her that I never wanted to see that again. She is so good in the one v one and she has such a good finish, I told her that she needs to try and try and try again to take the player on because that would be best for the team. 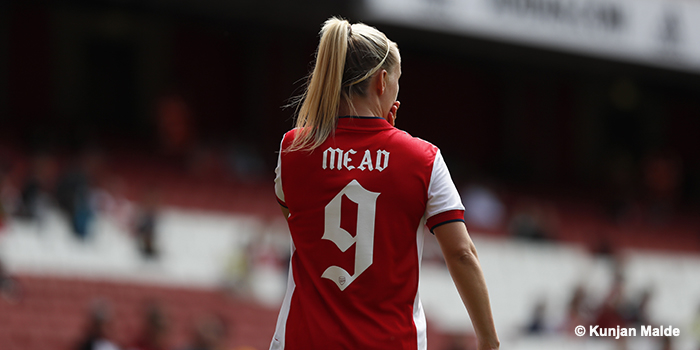 “Maybe Beth Mead is in very good form but, more essentially, she is a great player. Sometimes when we talk about someone being in form, does that mean that she will drop out of form suddenly and not be able to do the things she is doing at the moment? For me, this is just Beth Mead using her qualities as a player and believing in them.”

LAST TIME OUT
When the teams met back in April at Meadow Park, Arsenal ran out 2-0 winners thanks to goals from Vivianne Miedema and Kim Little. In the reverse fixture last season, the Gunners were 9-1 winners in Dagenham with a hat trick from Jill Roord, a brace from Vivianne Miedema and goals from Leah Williamson, Caitlin Foord, Lisa Evans and Kim Little.

THE OPPOSITION
West Ham finished 9th last season but were dragged into the relegation fight after a poor season by the standards of their squad. Previous coach Matt Beard left half-way through the season after a string of poor results and 21 year-old Managing Director Jack Sullivan also left during the summer. Last December, the Irons appointed New Zealander coach Oli Harder, who has since transitioned the team to a back three who play a high pressing style.

This season, their results have picked up and they are unbeaten since an opening day defeat at Brighton which was largely due to a first half red card for centre-half Hawa Cissoko. They are difficult to beat and physical opponents, bringing a tough streak that was too often absent under the topsy turvy stewardship of Matt Beard.

“Part of our game model and part of our approach on how we want to affect the game is to be effective in transition,” Harder explained in his Friday press conference. “I like to talk about it as efficiency rather than being direct. We’re efficient in our movement and what we’re trying to do.” Arsenal loanee Lisa Evans is ineligible for the match.

PLAYER TO WATCH
Steph Catley arrived from Melbourne City last summer but found her first season in North London wrecked by hamstring injury. This season Catley has already played more minutes than she managed last season, however, the form of Katie McCabe at left-back has continued to dominate conversation. 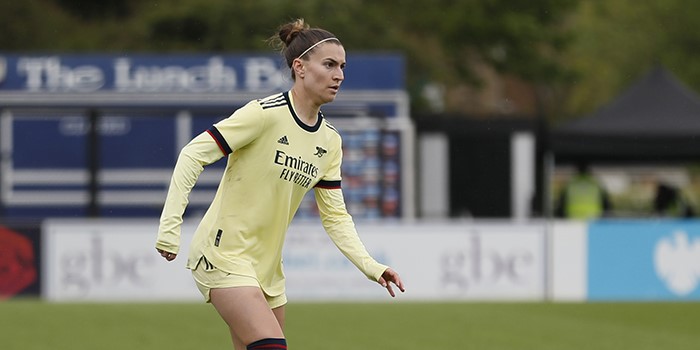 The Australian picked up a small muscular issue while playing for Australia, causing her to miss the FA Cup semi-final victory over Brighton last weekend but returns to the squad for this game. Catley has played well at left-back this season but she will want to build up even greater rhythm and show why she is considered as one of the best in the world in her position. 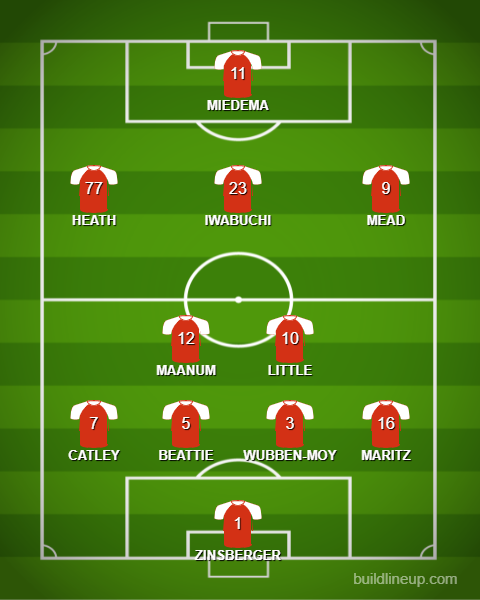 HOW TO CATCH THE GAME
The match takes place at Meadow Park at 6.45pm on Sunday with tickets available either here, or on the gate at £8 adults and £4 concessions. The match is being screened live on Sky Sports in the UK and will also be carried by your local WSL rights holder. If you are going to the men’s match at Emirates Stadium earlier in the day, it is possible to travel from Arsenal to Meadow Park in time for kick off. Simply take the Underground to King’s Cross and catch a Thameslink train from St. Pancras International to Elstree and Borehamwood, the ground is a ten minute walk from the station, just turn left out of the station, walk down the high street and bear left after McDonalds.

COMING UP
We will have match reaction from Jonas Eidevall on the site on Sunday evening, as well as video reaction from me both on the site and the @ArseblogNews twitter account shortly after the game. We will, of course, bring you all the build up and reaction to Wednesday’s Champions League game against Koge in Denmark.

Arseblog News also recorded exclusive interviews with Jordan Nobbs and Lotte Wubben-Moy on Friday and they will be released in the coming weeks, we will have a special Arsenal Women Arsecast ahead of Women’s Football Weekend at the end of next week and we also have a little something special lined up for later next week too. Lots coming your way!

Previous article‘Lisa Evans is great player, she deserves to play’ Jonas Eidevall on decision to loan out Lisa Evans
Next articleArteta frustrated by lack of European football but positive his project is on track

Both Leah and Lia out of the starting line up would be a “slight” concern for me. Leah in particular has been in phenomenal form both in defence and as the springboard for so many attacks.

Maybe Leah is next to take a break. Getting her fresh and ready for Tottenham and United… I would appreciate it if that were true. Like I said with Viv, if this is done because players want it, it shows they are serious about putting (mental) health first with players.

I am curious to see what West Ham will be able to do after beating City. Confidence should be high.

Aye, I did ask whether anyone else would be rested this weekend and Jonas said no. Leah was supposed to be part of a club media day on Friday too but had to pull out last minute too. She might be unwell, I guess.

Well at least she will get bed rest if she’s ill. I thought she looked tired in the last couple of games – not from her performances, just a general impression.

Thing is City are not the team they were this season. The table does not lie!

…..and the little matter of a trip to Denmark Wednesday plus the Koge return the following week so 5 games in 15 days. That is a punishing schedule physically and mentally.

So excited for the game!

Watched the West Ham – Manchester City game. City dominated with the attacks but everything just happened to go well for WH, like shots hitting the bar and post, and the goalie saving an open 1v1 situation. If chance fell just a bit differently I think City would have won 3-0. WH goalie did well and they do have a good defender in Cissoko, but Arsenal can attack from anywhere, we can’t be stopped by one good defender. And we’re more clinical with the finish. I’m confident we’ll win by multiple goals.

Oh, and great bit of information in the article on how Jonas motivated Mead! Recognizing the player’s potential, expecting better of her, and the player responding to it!!