Arsenal 2-0 West Ham: By the numbers

I hope with this win Arsenal are able to put the bad performances of the past behind them. This was another chance to move up the table and gain points on a direct rival (or create space) and this time Arsenal were able to take advantage, playing one of their best all around matches of the season.

Arsenal 2-0 West Ham: By the graphics 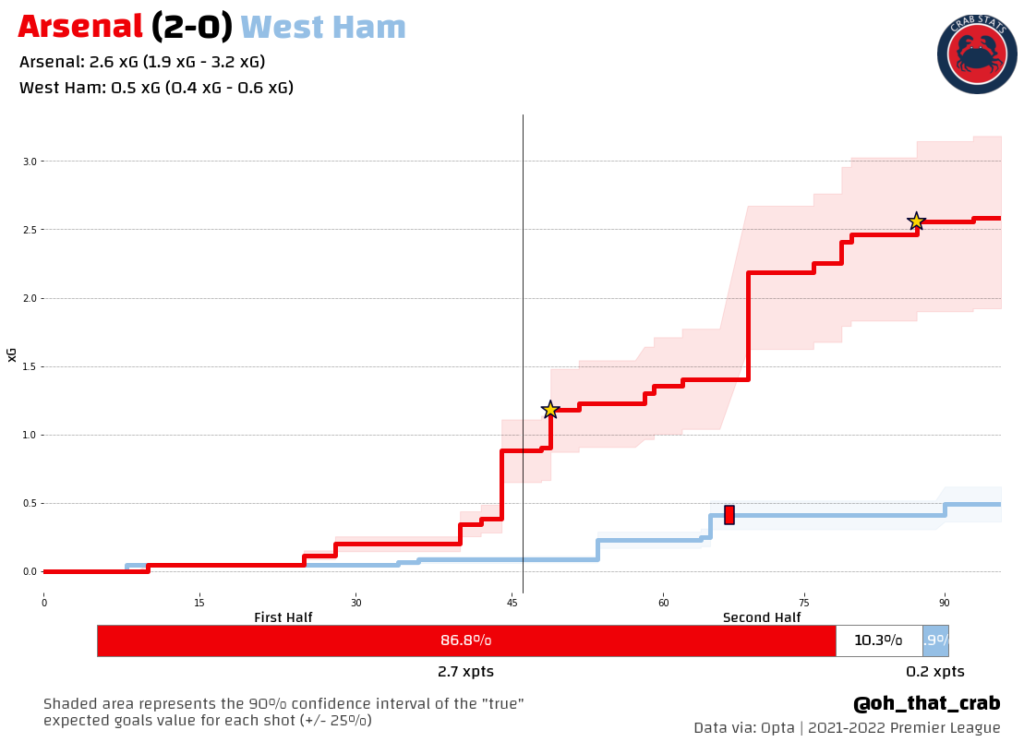 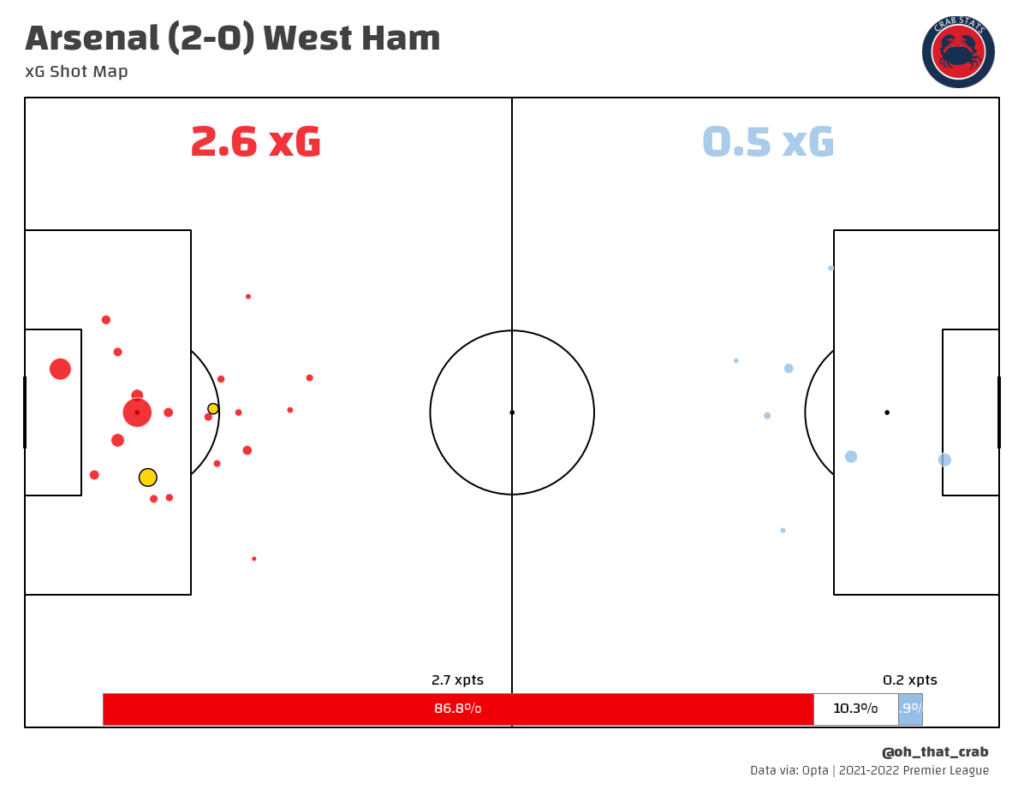 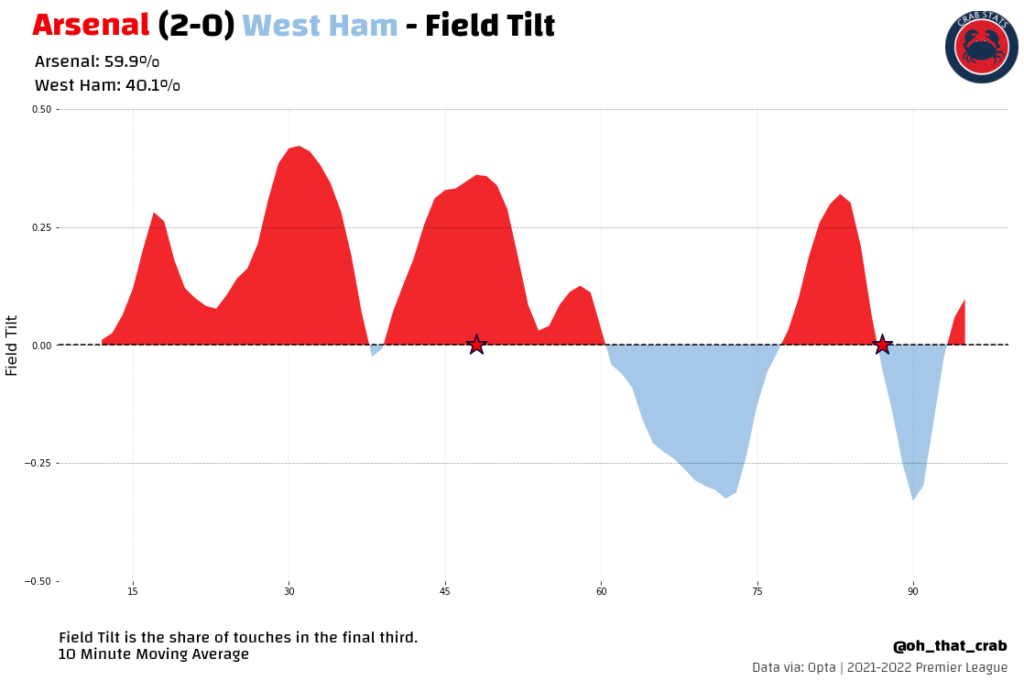 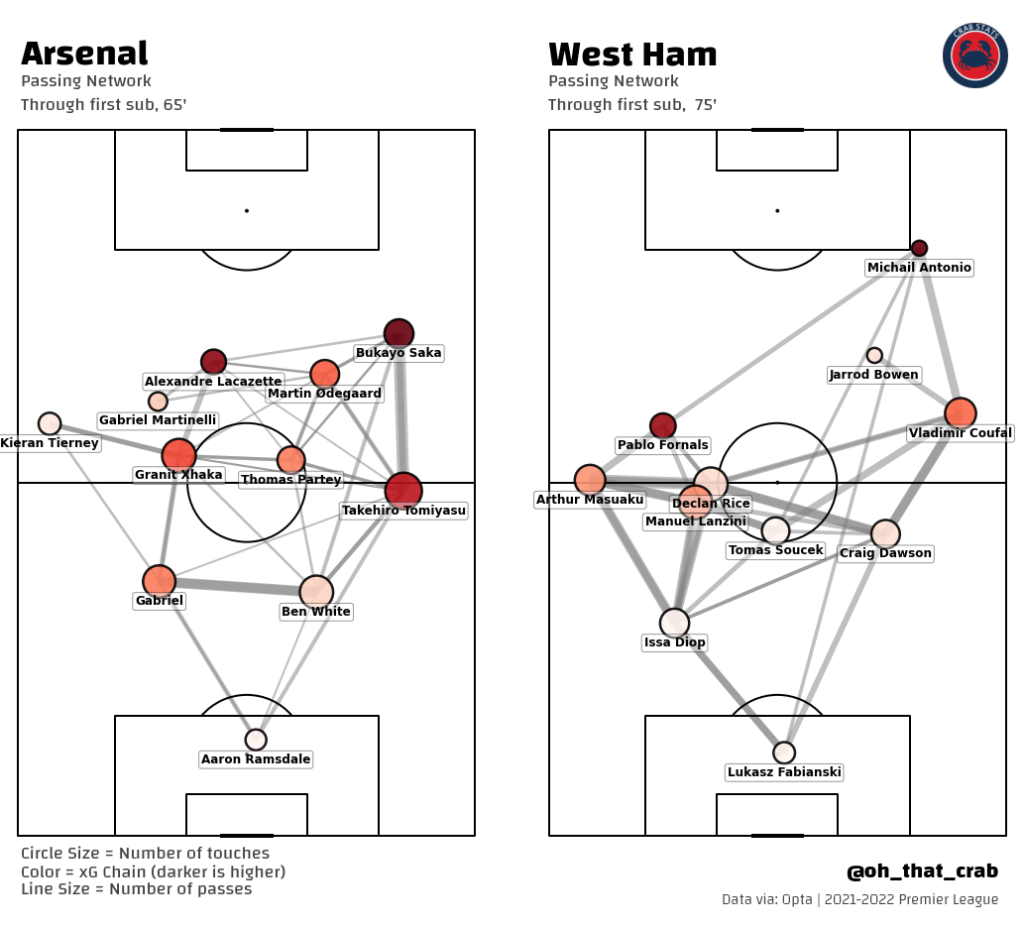 Arsenal 2-0 West Ham: By the numbers

4 – Shots from Gabriel Martinelli, including a great goal and 0.8 expected goals (xG). Over his last four starts he has taken 11 shots, a big improvement over the start of the season where he took just 3 starts from 6 appearances and 187 minutes.

41 – Touches in the box for Arsenal, the third most that Arsnal have had this season.

9 – Touches in the box by Alexandre Lacazette, Bukayo Saka, and Martinelli

7 – Shots from West Ham, this is just the third time this season that they have been held to 7 shots or fewer (the other times were Liverpool and Manchester City). Their 0.3 xG (statsbomb version) or 0.5 (my xG model) is the 2nd lowest of the season.

0 – Shots by Michail Antonio, this is only the second time this season that he has been held without a shot (Manchester City the other). He also managed just two touches in the penalty area which is tied for the fewest that he has had in a match this season.

I thought that this was one of the more impressive overall performances for Arsenal this season. There have been times Arsenal’s stats have been better but considering where West Ham were in the table this match gets pushed to the top for me. Arsenal pressed well, forcing West Ham out their fullbacks before closing them down with multiple players forcing long balls that Arsenal were well positioned to win. Arsenal were able to put a ton of pressure on West Ham’s goal, Arsenal put 7 shots on target and only a good performance from Łukasz Fabiański this could have been 3 or 4. I think that the Arsenal defense handled the threat of Antonio very well. After the issues that Arsenal had against Romelu Lukaku and Ivan Toney (against a different backline) it was a relief to see Gabriel and White shut him down.

Another very good sign form Arsenal is that this is the fifth time this season Arsenal had more touches in the final third than they did in their own defensive third. I think that there are a couple potential reasons for this but first is that West Ham had a red card, the second being that they did not press Arsenal high at all, with just 9 high pressure events in this match. This led to the vast majority of this match to be played in West Ham’s part of the field.

Home Field Advantage is Back

22 – Points for Arsenal at home this season, last year Arsenal had just 28. Over the 10 years prior, they averaged 41 points. Overall Arsena have picked up 4 points compared to the same fixtures.

17 – Goals for Arsenal at home this season, last year Arsenal had just 24. Over the 6 years prior, they averaged 40 goals.

6 – Goals allowed by Arsenal at home this season, last year Arsenal allowed 21. Over the 6 years prior, they averaged 17 goals against.

Last year was very weird across the Premier League in terms of home field advantage. Only 9 teams had more points at home than they did on the road, before that over the 10 previous seasons that number had never been higher than 16, with an average of just 2 teams who won more points away from home than they did at their home stadium. In the 10 seasons prior to last year, home teams averaged 1.6 points per match with away teams averaging 1.1, last year that number was 1.35 to 1.4.

Overall at this season things are trending towards a “normal” year (who knows how that plays out with the current situation) with 12 teams earning more points at home and 1.55 points at home against 1.18 points away.

I have been incredibly hard on Lacazette, because up to this match he was a step below the level required for the team. In this match however he put up one of his best performances in years for Arsenal and calmed some of the doubts that I had about him playing striker. He did good holding up the ball and acting as an outlet, he provided a sublime assist for Martinelli and even managed to get a few shots off (even if he did miss a penalty).

In this match, the understanding between him and Martinelli and Odegaard was much better. With Martinelli he had a better understanding of one of them always staying high up the pitch to give Arsenal a focal point and with Odegaard they seemed to do much better of not taking up positions in the same pockets of space.

He also took the arm band in this match and played as if he were unaffected by the chaos around the team. A very good performance that was very important from one of the senior players in the team.

Sources: Opta via StatsZone, Whoscored, my own data base. StatsBomb via FBRef.

Previous articleXhaka: We believe we can finish in the top four
Next articleAubameyang not available for Leeds trip

Vieira thanks Martinelli as Brazilian pledges to...

Video: Brentford 0-3 Arsenal ‘On the whistle’

Laca should be made permanent captain. Nothing against Auba or the other guys (even Xhaka) but they were never this agressive . Look at all winning teams, the captain of most is a true d*ck to the opposition and to the reff, never letting them breath fresh air. My guess is we only had that soft pen cause he was on the reff’s ear all game.

The performance that Laca put in just isn’t in Auba’s wheelhouse. Committed. Strong. Linking up play. Intense. Involved. Just not something Auba is able to do. It isn’t until you see it that you realise what’s missing.

Still don’t think we should extend Laca though.

I think maybe we should… I’ve always liked him, and he’s been second fiddle to Auba for all but 6 months of his time here. He’s not even 30 yet is he?

That’s just how it works

Ha okay my bad, but still, he’s not exactly over the hill

One year extension with an option for another would be good enough imo.

Dominant. And Laca’s numbers are pretty awesome. Pity he missed the pen – he deserved the goal.

I would be cautious renewing him tho. We need however a type of striker with this qualities and more.
A Firminho type.
Is he actually available? He seems to be out of the picture for Liverpool.

Totally. 1 year max. He’s playing for a contract this happens all the time. Surely we can learn from the auba Özil mistakes…

Scott, it would be nice to see some stats on how Tomi has improved our defence against previous years. It was his persistence that gave the ball to Saka for the second goal last night. I feel he could be our best RB since Lauren. Back post weaknesses we saw with Hector have also reduced significantly.

Only complaint is sometimes he can be slightly sloppy in possession/flap a bit under pressure. Overall though he’s a revelation. Cedric not even a thought on the horizon. I was a big fan and defender of Bellerin and will always rate him but Tomiyasu makes his departure very straightforward.

Yes, and let’s not get ahead of ourselves. Sagna was solid for years, Bellerin a level above most of the team before his injury (could have pushed for a move to Barca or other club with deeper pockets and didn’t). Tomi has to keep doing what he’s doing for a while to surpass either of them. I’d love to see those stats though!

Bellerin has some deficiency not good in the air, Sagna more all round defender

Bellerin would be good to have back in the squad next season – when we’re back in Europe – as our second choice right-back, but seems incredibly unlikely he would accept that.

Appears like he’s having a great season with Betis currently 3rd in La Liga and into the next round of the Europa League. They also just beat Barcelona 1-0 at the Nou Camp.

A lot of people talk about how Hector lost some pace after his injury. Sure, but he wasn’t exactly slow–before the injury he was probably the fastest player in the Prem.

Tomi heading impresses me the most. We almost never manage to direct headers to our own players, yet he is a monster in the air and usually finds his target. Would be interesting to see the stats here.

Good form from our defense. Gabriel and White are doing really well but nowhere near their peak potential. Same for Tomiyasu, Tierney and I’d even include Tavares in that mix. So impressed with what Arteta has done with the team defensively. That group will get better and better over the next 18months. The only real issue is back up for Tomiyasu. Soares looks to be a big drop in quality from Tomi’s current level. We want to provide him the quality of competition that Tavares provides for Tierney. But strikers and another central midfielder are bigger priorities at the moment.

Tavares at RB seems like the best option to me.

We already have the player to cover for Tomi. Saliba has played at RB for Marseille this season and acquitted himself quite well. He’lll be a marvellous addition to the squad next season, as a CB and cover at RB.

Hes our Frenchman
Hes our number 9
….

Such a good footballer. Happy hes getting minutes and recognition.