The League Cup is supposed to be a fun, only sort of serious competition, this match lived up to that billing. Arsenal made a bunch of changes, getting to see some players that haven’t featured much this season, plus a debut by a highly rated prospect that scored on his debut!

Overall it was a great night, with some fun stats but this will be a short and sweet post because it is late and after all this is just the League Cup.

Arsenal 5-1 Sunderland: By the graphics 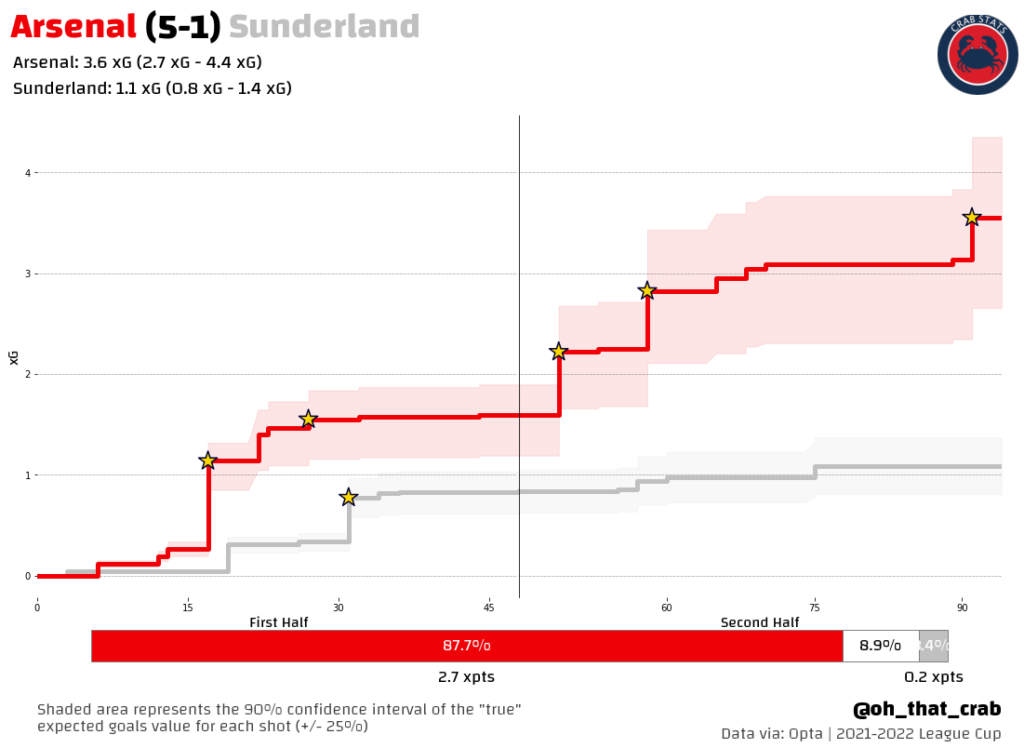 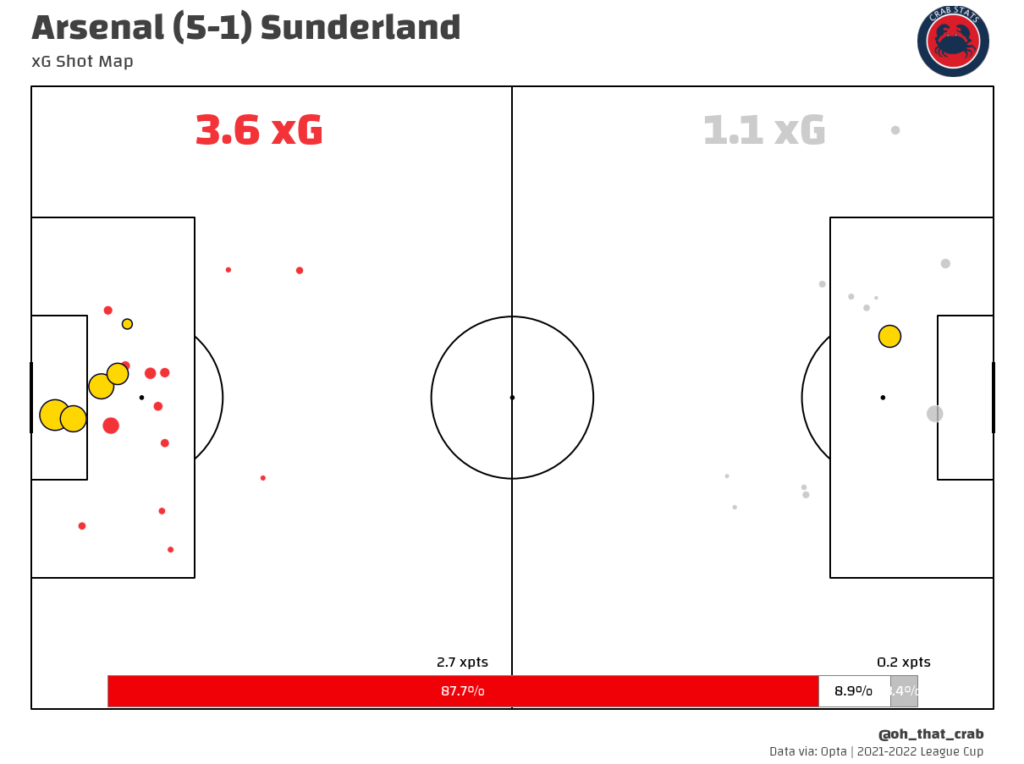 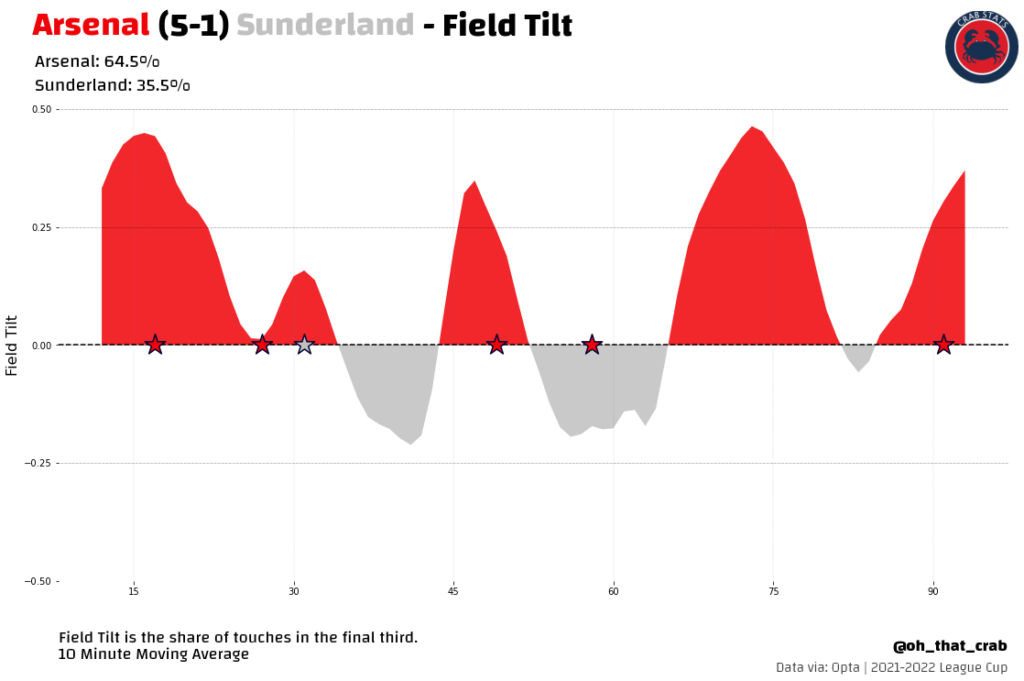 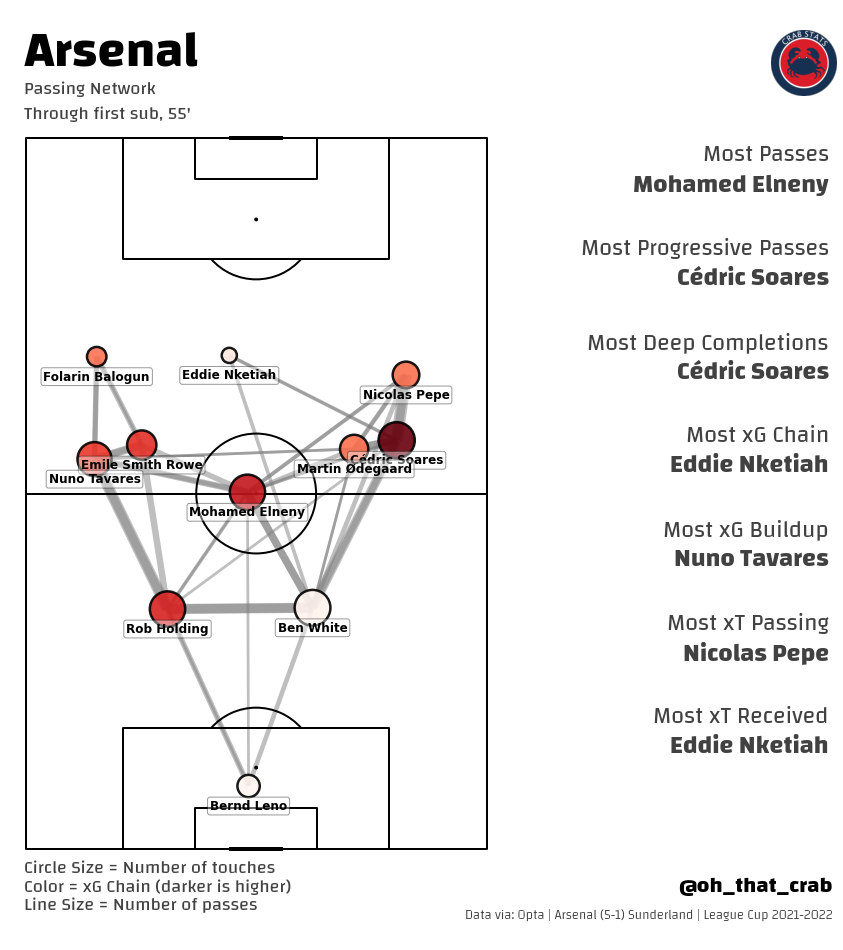 19 – Shots by Arsenal, I hoped Arsenal could hit 20 because that would mean it was the third straight game of 20+ shots but I will still gladly take 19 shots and…

5 – Goals by Arsenal. This is the second most goals for Arsenal this season (6 against West Brom also in the League Cup) and 14 goals in the last 4 matches. 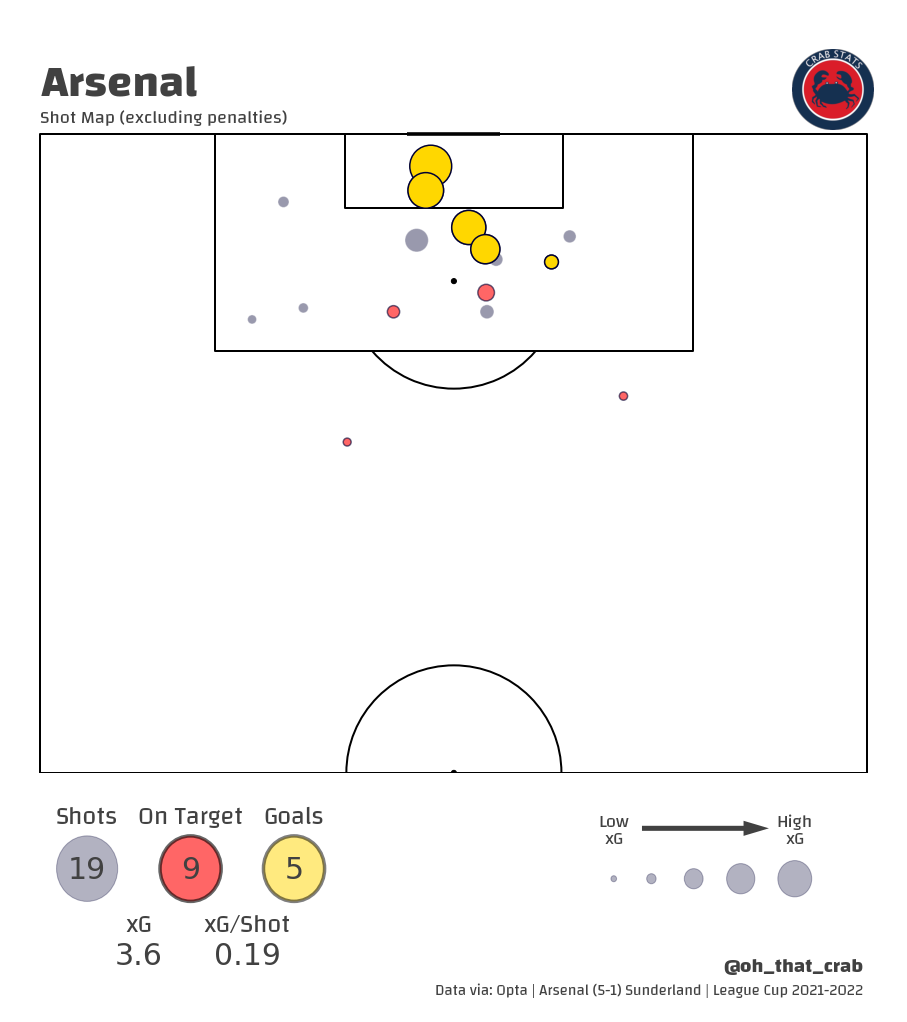 39 – Touches in the box for Arsenal, the 4th match in a row where Arsenal have had 35 or more touches in the penalty area.

11 – Successful Dribbles by Arsenal, the most since Arsenal have since November 27th against Newcastle United.

Overall the story of this match was screw it let’s attack.

Cedric played incredibly high, Arsenal started with Mohamed Elneny in the single pivot, with two sort of strikers supported by 3 attacking midfielders. In the first half it seemed like the instructions were sort of along the lines of go be aggressive because even if the team concedes we are going to try to outscore them. It ended up with a pretty dodgy goal conceded but also led to Arsenal scoring 4 goals in the opening 60 minutes, that’s a trade-off most of us will make every week.

Eddie Nketiah repays the faith Arteta placed in him

4 – Shots in Prime, 1st among all players

17 – Deep Touches, 1st among all players

4 – Tackles, 1st among all players

Nketiah was a perfect poacher in this match, with 3 goals inside 8 yards.

I don’t mean that to disparage him, because having the ability to find space that close to the goal is incredibly impressive. It is not a fluke that some players always seem to find the space on rebounds and crosses, it takes great speed over short distances, good anticipation, and excellent reading of the game, these are skills that Nketiah seems to be well-stocked in.

I don’t know if he will stick around with Arsenal but there is nothing that I have seen from Nketiah that says that he will be anything but an average or better scorer at the Premier League level. I would love to see him stick around Arsenal but would fully understand if he left to be something more than a backup somewhere else.

Nicolas Pepe comes to life in the second half

3 – Key Passes in the second half. In the first half, he had zero. He had 2 assists from 1.1 shot-assisted expected goals (xA).

3 – Progressive Passes in the second half. In the first half, he had zero.

5 – Deep completions in the second half. In the first half, he had 3.

5 – Successful dribbles in the second half of 6 attempts. In the first half, he was 0 for 3 on dribbles.

4 – Progressive carries in the second half. In the first, he also had 4 (not everything was bad about the first half because he also did score).

I wasn’t impressed with Pepe in the first half, by the general consensus of Twitter this wasn’t an unpopular opinion. Now I don’t think he was bad (which others went a little further in expressing) but rather looked very rusty. Everything that he did seemed to be just a touch slow and didn’t come off. He did manage to take 3 shots and produce a goal but outside of that was a bit of his usual blackhole in the attack, where the attacking momentum was lost in his gravitational pull of multiple touches.

The areas where he received his passes I think illustrate this well. 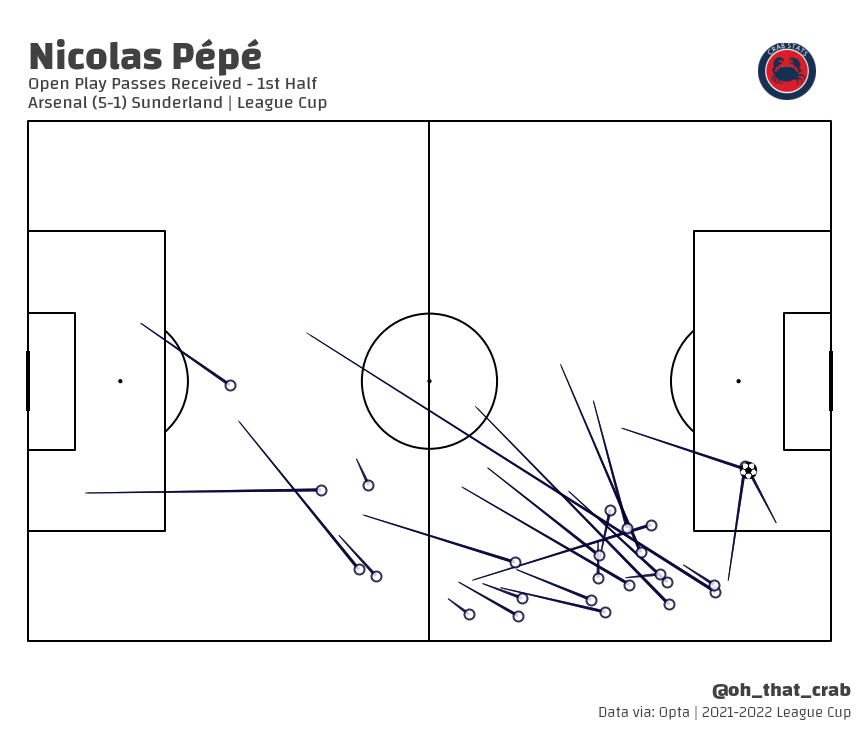 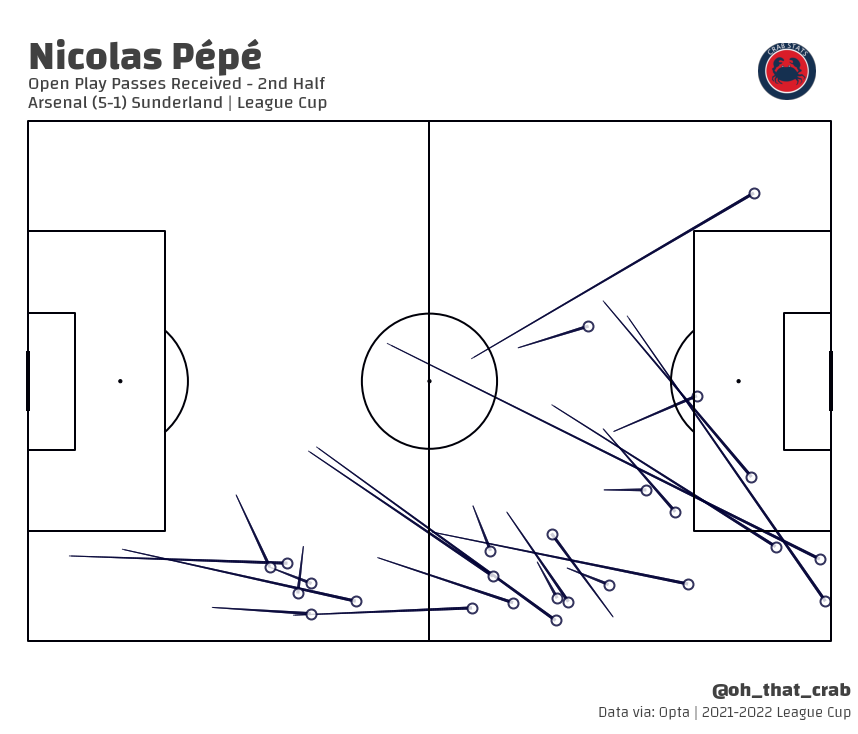 In the first half, he was receiving the ball much closer to the touchline and more often in the attacking midfield band. In the second half, his touches moved more central and when they were wide it was significantly deeper. Receiving in those locations makes Pepe a much more dangerous player, he still wants to try and get the ball onto his last foot but in those locations, he has built-in options that make him less predictable and harder to defend. It was good to see him perform well (even with the caveat of the level of competition) to increase the depth of options for Arsenal in attacking midfield.

Sources: Opta via WhoScored and my own database

Previous articleArteta: Eddie will play more, we want him to stay
Next articleArsenal censured by advertising watchdog over fan token promotion

I am glad for Eddie, he played really well tonight and deserved his hattrick. But i think the calls for his new contract are a little premature and reactionary. Yep he’s young and will probably grow, and it’s always a shame to see a youth product with decent potential leave, but let’s not forget he’s not some kid who we’ve barely seen, he’s played well over 50 games for this club and we’ve seen him struggle at a premier league level. While he was good today, lively when he came on against Everton, and promising during preseason, we have seen… Read more »

however you also always need quality backup to be a top four team and i think eddie has looked much better this season than at any other time. Maybe there is an element of putting himself in the shop window but I just think physically and technically he looks better and sharper. He is a good poacher but the ball also sticks to him quite well and he is adept at holding it up much more so than Aubameyang. If Lacazette and Auba leave soonish as well as Eddie we’d end up having to buy 2 strikers because Balogun isn’t… Read more »

Great point, Eddie need to be patient or we hope Martinelli really steps up as a striker next season.

We all feel happy with a win and goals.

However we need to look at the oppo and put it into context. He’ll do well in a lower division.

Good job from Eddie, I would be pulling out the stops to keep him to be honest but still looking for a leading striker. Luis Suarez (or similar) in his prime please!

I’m also raving about Pepe. Don’t want or expect him to replace Saka but yesterday was a perfect contribution. Assist and goal, he needs confidence and it’s Arteta’s job to provide it. Get him on much more often. PLEASE.

Yes this is correct

I guess the problem with his performances before was that he was just too sober to play well?

Agree that Pepe losing the ball is a too common sight, but I would say he had a productive game with a goal and two assists, which could have been more had Odegaard also converted from another great pass.

I have a question. To the right of the Passing Network table is written “Most xG Chain: Eddie Nketiah”, but on the map itself, where higher xG chain is indicated by a darker circle, his one is quite white… What am I missing?

Great question I will go look at that. I wonder if I had a brain fart and the actual circles are for xG Buildup rather than xG Chain

Eddie is what we used to call, in my youth, a poacher. Our sp*d rivals had the famous one in my youth, Jimmy Greaves, who often looked like a spectator for much of a game, but then pop up and score goals. Eddie got his chance today to play that role and got a hat-trick. But when he’s brought on as a sub and asked to play wide, it’s to see what else he can do. I’m not sure that, at the very top, being a poacher is enough these days. If Eddie can add other stuff to his game,… Read more »

Expected threat, it is a measure of how the probability of scoring changes as the ball gets closer to the opponent’s goal (can also go down if it goes backward or the ball is lost). My version I have called Goal Probability Added but it is very similar to other xT models. https://www.crabstats.xyz/goal-probability-added-explained/