Arsenal are producing some of their best performances in years and it couldn’t make me happier. I will grant all the caveats people want about the quality of opponents people want but when the team is comprehensively beating teams that they are supposed to, that is a step in the right direction and something to be positive about.

Norwich 0-5 Arsenal: By the graphics 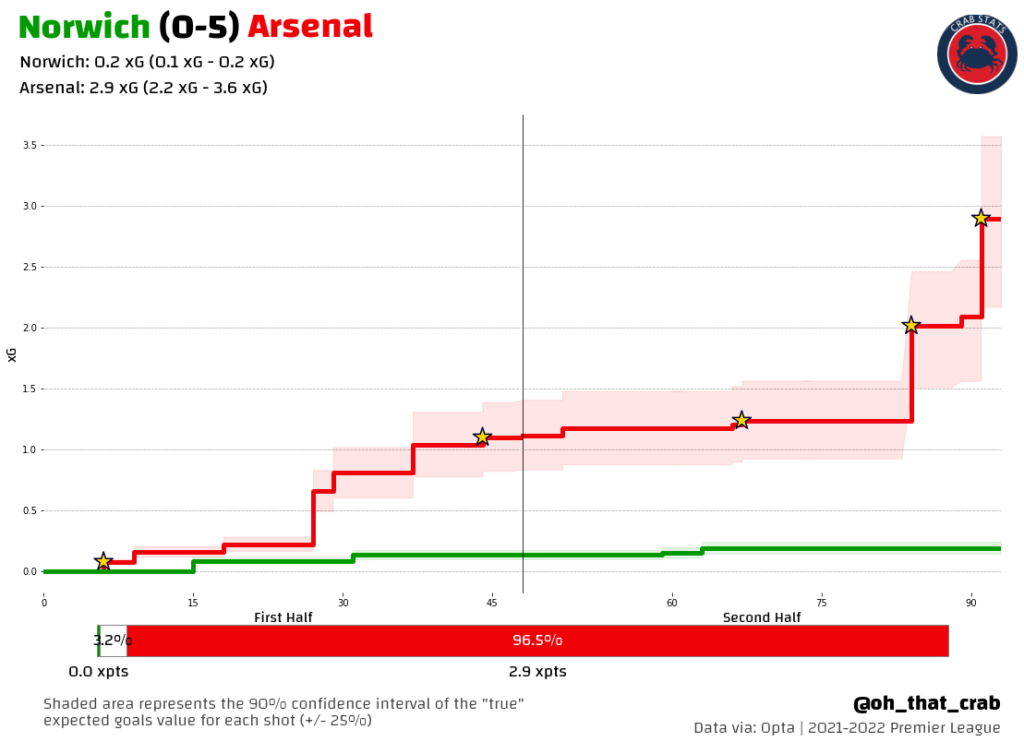 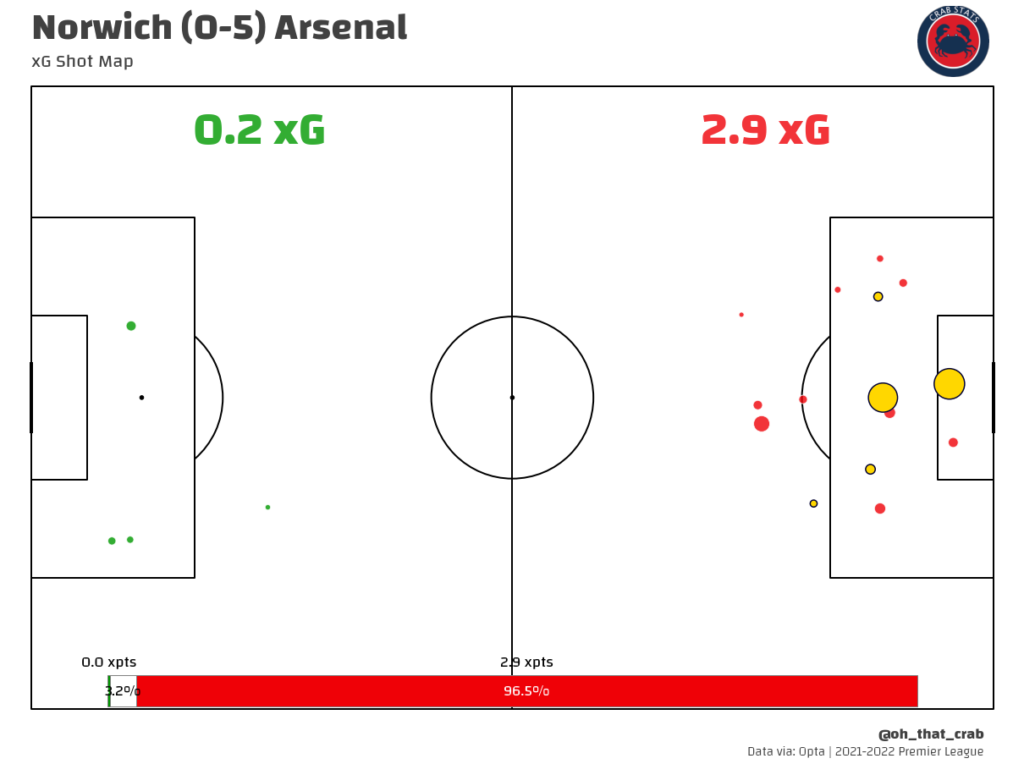 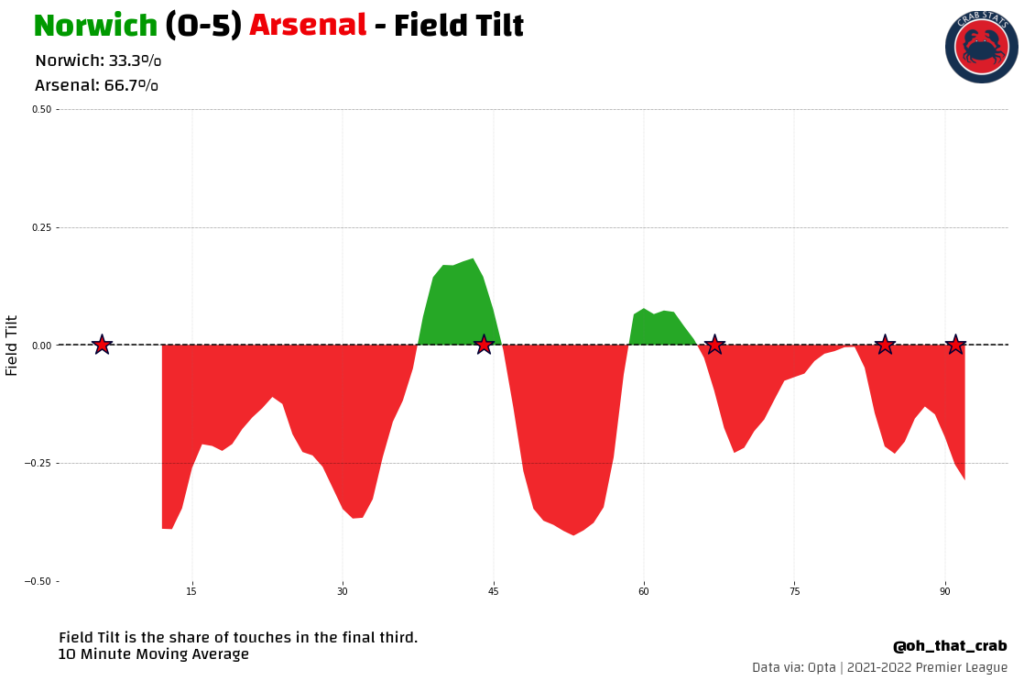 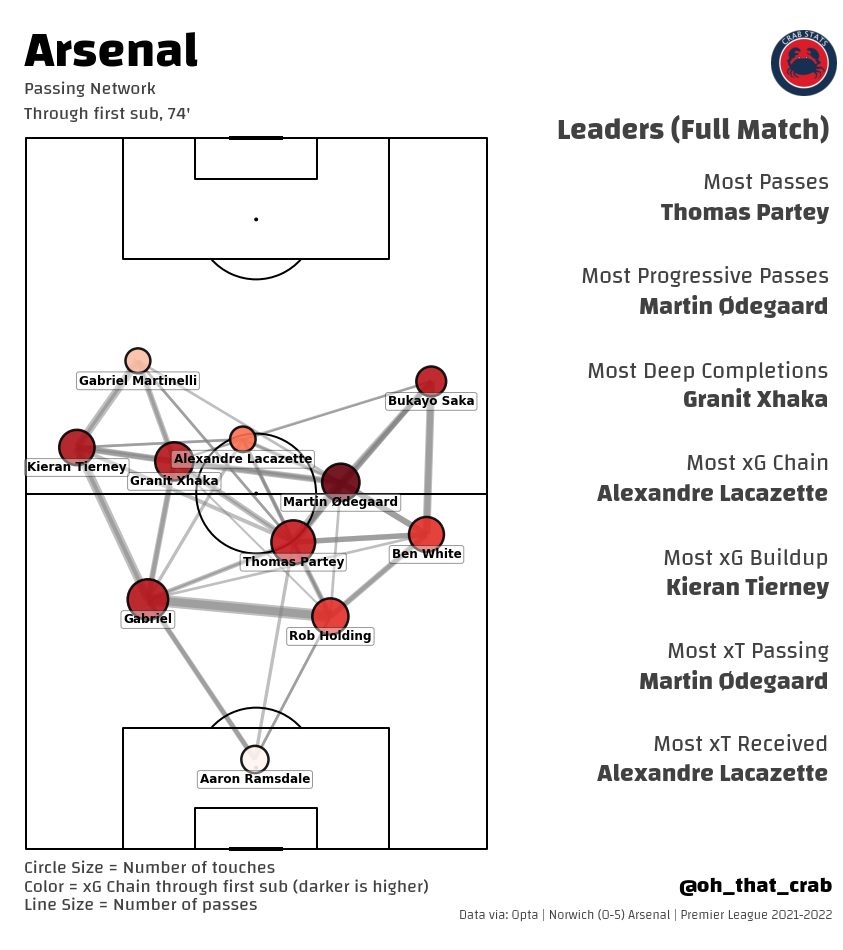 19 – Goals scored by Arsenal in their last 5 matches. Over this period Arsenal have produced 13.5 expected goals (xG). Over their last 4 league matches, Arsenal have scored 14 goals, averaging 3.5 goals per match.

16 – Shots against Norwich for Arsenal. In their last 4 league matches, Arsenal have taken 72 shots, averaging 18 shots per match.

4 – Shots allowed by Arsenal, the fewest Arsenal have allowed in a League match this season, and the third-fewest that Norwich have created this season.

25 – Touches in the box for Arsenal against Norwich.

7 – Touches in the box allowed by Arsenal against Norwich.

38 – Passing sequences of 5 or more passes by Arsenal against Norwich.

18 – Passing sequences of 5 or more passes allowed by Arsenal.

750 – Minutes spent winning by Arsenal, the third-most in the Premier League.

Like several matches that Arsenal have had this season, the score really affected things. Arsenal scored early in this match and then went up a second goal late in the first half. Both of the goals were from decent but not clear-cut chances but going ahead meant that Arsenal didn’t need to press to create chances. In the end, Arsenal created plenty while also playing at a level that often looked like it was a step below full effort. I don’t say this as a bad thing, in fact, I think it is the opposite. If Arsenal can swat away teams at the bottom of the table while they are in second or third gear that is even better for them.

Over the last few matches, Arsenal have dominated the teams that they have played. It hasn’t been the hardest run of games but being able to show the ability to beat the teams you are supposed to is an important skill for a team that has aspirations of finishing in the top four. Scraping by is a worry, winning convincingly against mediocre and bad teams is a very positive sign, I will take points but I am much happier when it comes with the performances to match.

33 – Shot creating actions since Martin Odegaard has come back into the team as a starter (since Newcastle).

55 – Shot creating actions for the season, 11th most in the Premier League

3 – Goal creating actions against Norwich, including 2 assists and 3 key passes

7 – Progressive passes, tied for the most on Arsenal

4 – Passes into the penalty area (excluding crosses), led all players

I was incredibly pleased that Arsenal brought back Odegaard in the summer. I thought that he was good with Arsenal last year, becoming an important part of the team that really improved in the second half of last season. He has shown incredible promise as a creative player at times but now since he has re-emerged as a starter for Arsenal he has become an integral creative force for the team. His partnership on the right-hand side with Bukayo Saka is becoming a scary thing to face for opposing defenses and I love to watch it.

3 – Shots against Norwich, tied for the most on Arsenal.

41 – Shots this season, the most for Arsenal.

5 – Goals this season, second-most6 for Arsenal.

92 – Touches in the box this season, the most for Arsenal.

4 – Progressive passes received against Norwich, 4th most for Arsenal.

111 – Progressive passes received this season, the most for Arsenal.

29 – Key passes this season, the second-most for Arsenal.

The subtitle of this section might come off as a negative compliment but it is meant the opposite. Saka has become such an important part of this Arsenal team that we expect these levels of performances from him and that is crazy for a player that is just 20 years old. One of my favorite things now is when opposing defenses only put one player on Saka, because that is a clear signal that I should pay extra attention to what is coming next, in this match that happened a handful of times and that led to 2 goals and a couple of great scoring opportunities created.

Saka is very clearly Arsenal’s attacking sun, the focus of which everything else revolves around. It is amazing that is happening for a player of his age and perhaps even more impressive that we just expect this now as fans. He special player and we are lucky to be able to watch him week in and week out.

Sources: Opta via WhoScored, StatsZone, my own database. StatsBomb via FBRef.

Previous articleArteta: Odegaard glides us together
Next article“It’s a joyful moment” – Partey bigs up in-form Gunners

Hook it to my veins!

Numbers and poetry (“Saka is Arsenal’s attacking sun, the focus of which everything else revolves around”) – what a treat!

What a vibration that was!
And what a time to be a gunner!

The passing map is really interesting and a bit different to normal. Xhaka played way more forward than normal and partey dominated possession and build up. It meant we weren’t unbalanced to the left as we are when xhaka is the fulcrum. This allowed us to use the Odegaard-Saka combo a lot. And martinelli played almost a free role on the left. Was really nice balance from mikel. I don’t think xhaka that high against a better team or one that just sits deep waiting on a counter will work, but against Norwich it was prefect because they want to… Read more »

In the second half, we set up the way, I think, Arteta ultimately wants: a (very fluid) 4-3-3 with only one of the midfielders (Partey) with a starting position in front of the back four. (If you like, you could also call this a 4-1-4-1, if you classify Lacazette as a nine–in possession it’s almost a 4-1-5). Ideally, a player like Smith Rowe would replace a Xhaka in this formation, but I don’t think we are quite good enough for that.

I think Lokonga could easily slot into that role – that is where I see his future – bit more advanced in a midfield with Partey. His passing is beautiful, and it would give us even more stability against the counter as he has excellent mobility. I don’t think this formation is for everyday use – it worked great against a team that likes to fight for possession. Might be a bit different against deep lying teams or the big 6 teams. The hope is eventually we have more games and ESR will come in for a lot of starts… Read more »

We have 4 special young players, not only Saka. And that’s looking at players in the 3 behind the striker.

Despite what the cynics may say, I doubt Arsenal can concede 4 goals against MC. Btw,Guardiola is not invincible.
After winning 9 games ,its time they come down to earth.
Be careful of Sterling . He can fall easily and a spotkick given.
I ts in the refs dna to give penalties to such teams.
Hopefully MA will keep a tight rein on some of the MC players

I’m not cynical but Man City can score 4 against anyone on their day.

Arteta just needs to keep it simple and not yet to overthink it as he’s done so many times in big games. No false 9s please…

I think this is Thomas Partey’s best game this year.

yup he was in control

Maddison’s season is shadowing Ødegaard’s; slow starts, temporarily out of the team, now coming into their best form and showing their quality. Ødegaard was half the price of course, just too good a deal to turn down.

Yup, I was worried we just weren’t going to get marty and miss everyone. We absolutely needed one. Marty has shown he was the right pick. Well done edu and Co for winning that poker match against perez.

Agree that Saka’s brilliance is now almost taken for granted. If he can become a consistent goal scorer, he’ll be a world beater.

It’s been mentioned on many occasion in other threads, though I also think Lacazette’s most xG chain & most xT received is worth a specific recognition. The new capitain is running his socks off, distilling some nice touches and combinations all over the upper part of the pitch. And that’s great!

He is really good in the press too. His press is efficient. He does it at just the right time, and with Gabriel in particular they do it in unison which is the difference. Laca was bloody great again.

Ödegaard has been sensational but I think an overlooked element is the return of Xhaka. We lost to Everton when he was barely fit, but since then we have won all five. I wished it wasn’t so but we are much better with him in the team.

He is playing like he plays for the Swiss, surprisingly mobile.

I think our problem with him before was that to compensate for his lack of agility we played him in a holding role…which he apparently sucks at.

I’d love to see some stats on second balls as it feels like we’re winning a significantly higher % of them lately.