It was never in doubt.

Or at least that is how I felt during that match. I know others got a little nervous at the end but really what Leeds did create were pretty marginal chances in full desperation mode. In the end, Arsenal took care of business, capping a very good weekend for their top-four chances.

If Arsenal can take care of business one more time, they will be playing Champions League football again next season.

Arsenal 2-1 Leeds: By the graphics 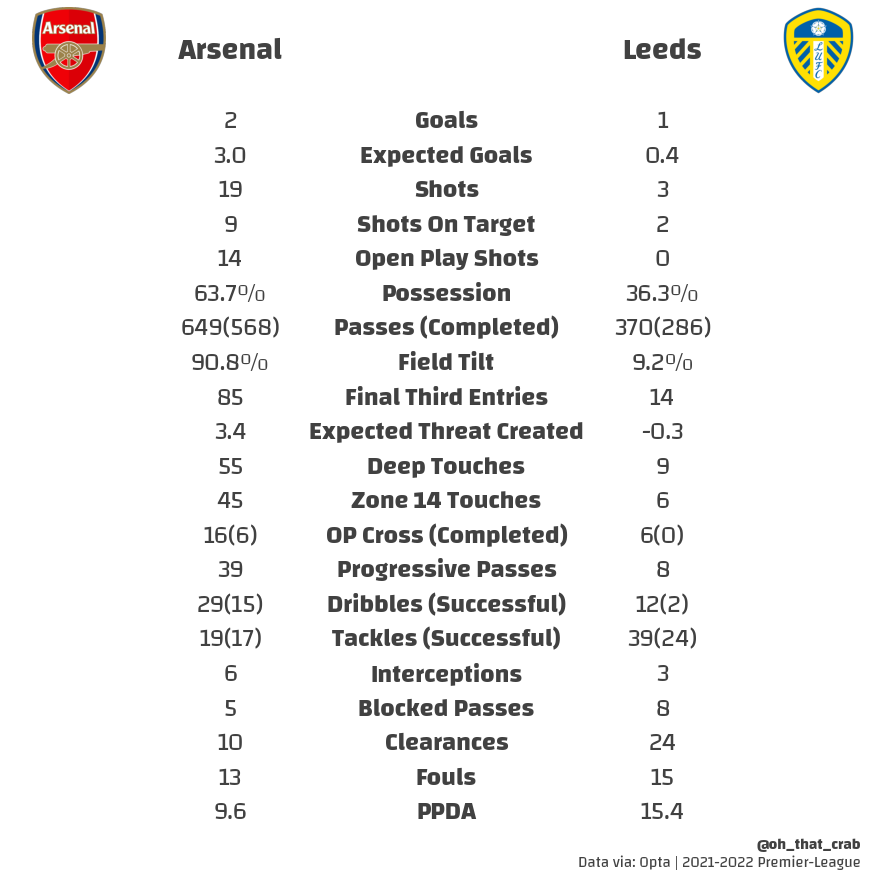 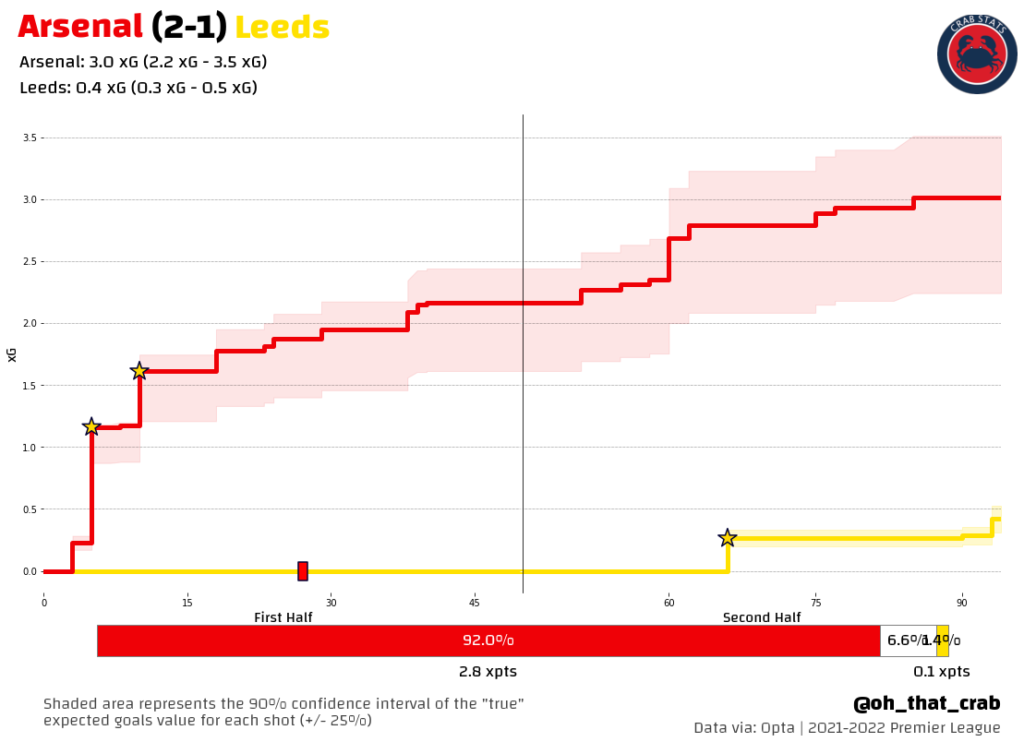 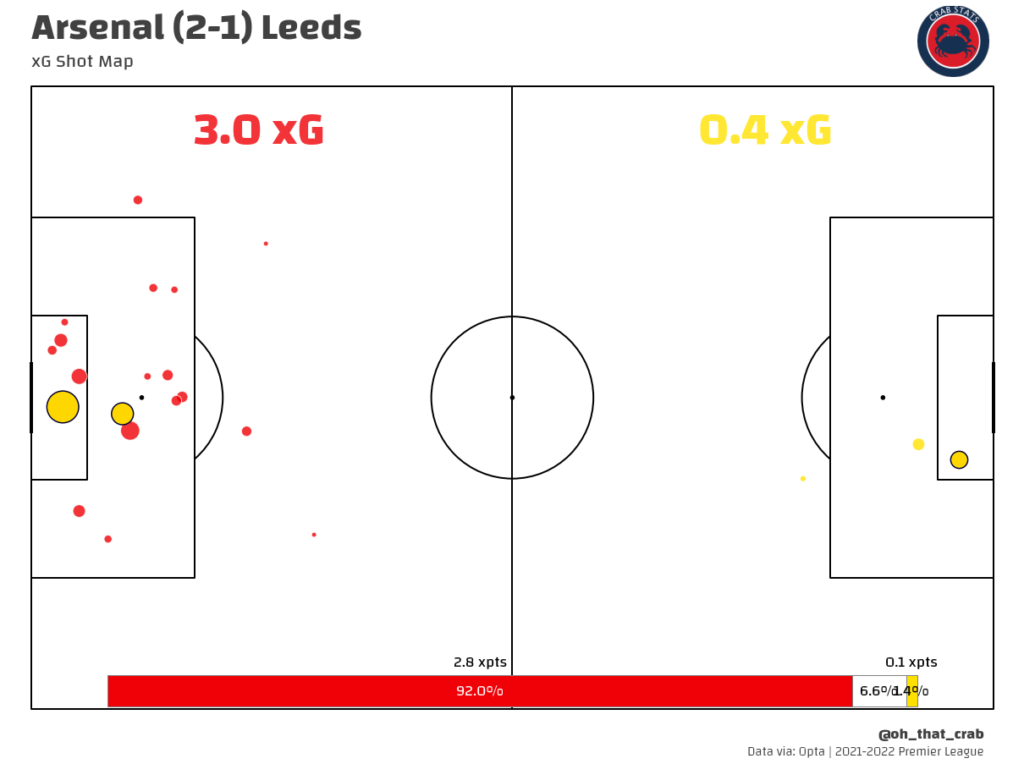 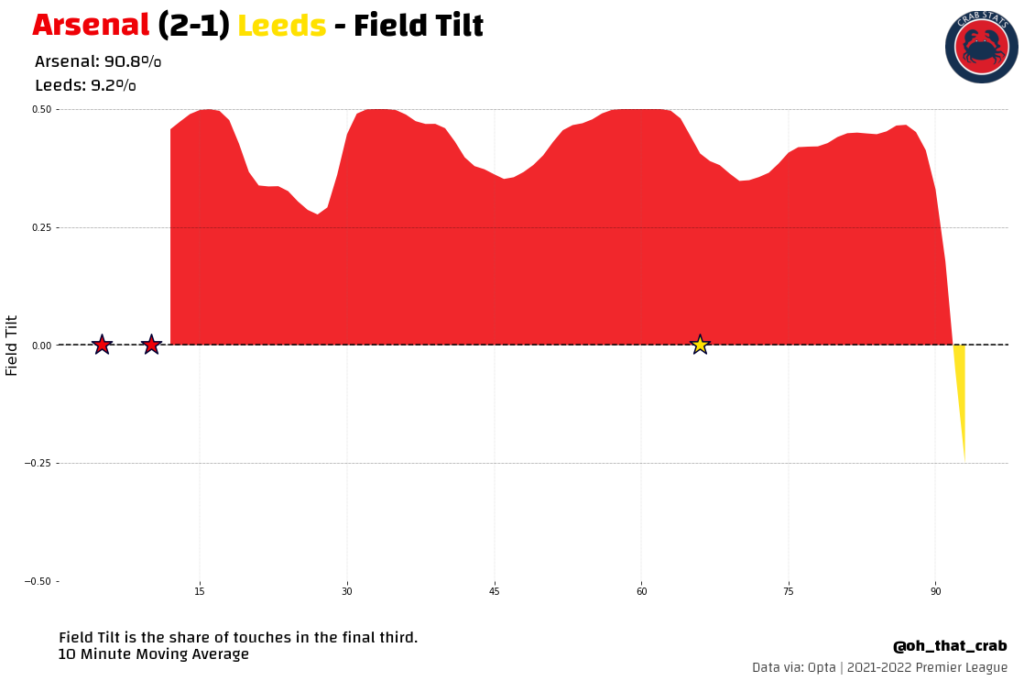 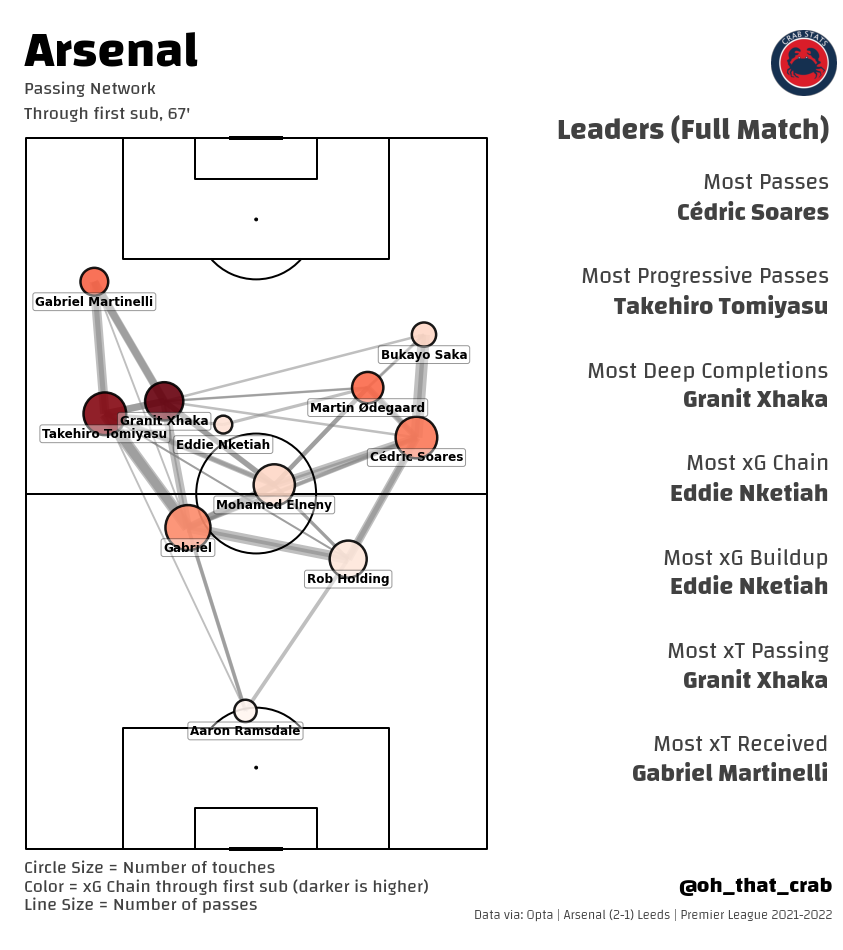 3.0 – Expected Goals (xG) for Arsenal in this match, the second-highest total in a match this season.

6.1 – xG this season against Leeds, the most they have against any opponent.

11% – The percentage of Arsenal’s xG that has come against Leeds this season.

55 – Goals scored for Arsenal this season, the two goals scored in this match took Arsenal above the 53 that the team scored last season.

9 – Shots on target, the second-most they have had in a match this season.

21 – Shots on target total against Leeds this season. 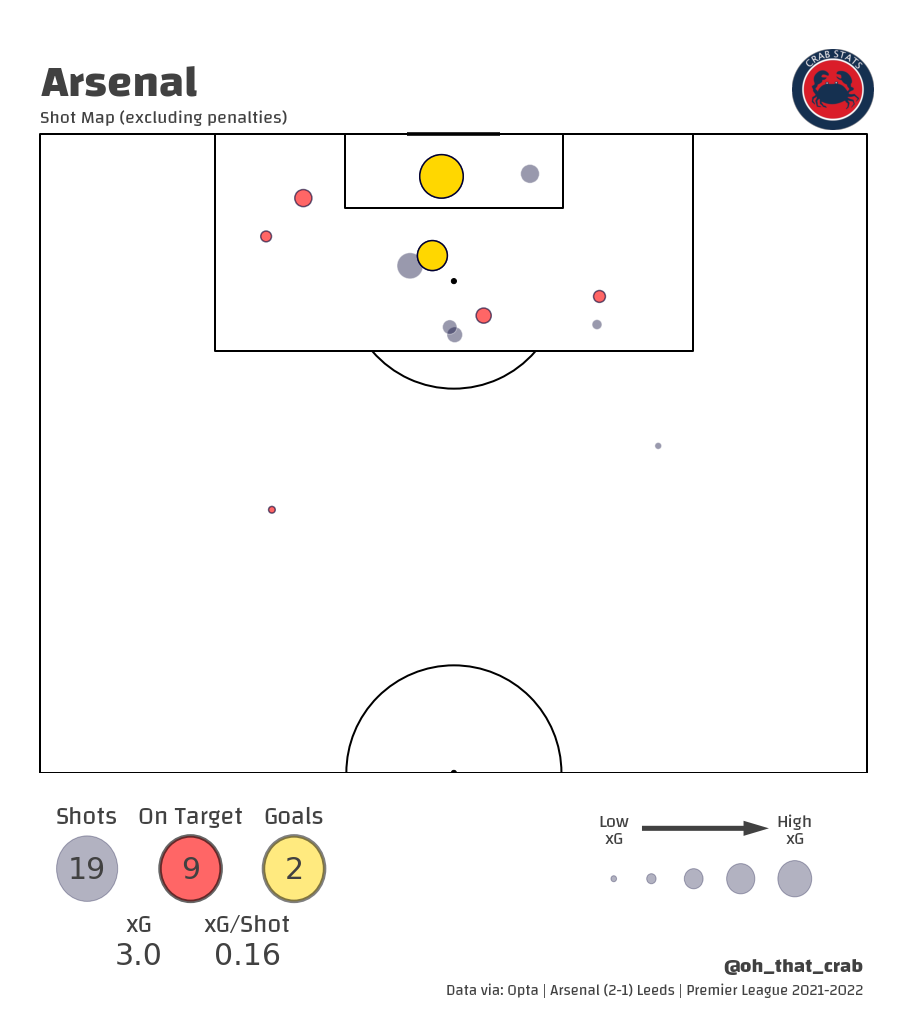 Arsenal were able to create chances seemingly at will against Leeds, both in this match and all season. It is a little disappointing that they couldn’t turn this into more of a stat-padding day with a third or fourth goal.

All stats below for the opening 23 minutes:

52% – Percentage of passes that were in Arsenal’s own half

81% – Percentage of passes that were in Leeds’s own half

9 – Touches in the box for Arsenal

1 – Touch in the box for Leeds

One of the more encouraging things that I saw from this match is that Arsenal started with clear intent to take the match to Leeds. After the sort of sluggish start to the West Ham match, this was a stark contrast, Arsenal closed down Leeds effectively where they had few options to try to progress the ball from their own half. This ultimately led to the first goal but also meant that Arsenal started significantly higher up the pitch. Arsenal averaged starting their possession 60 meters from goal while Leeds averaged starting theirs 74 meters from goal.

Arsenal’s pressing this season has been a little hit or miss depending on the players available and the team faced but in this match, it was very effective.

Eddie Nketiah shows what a different type of striker can do 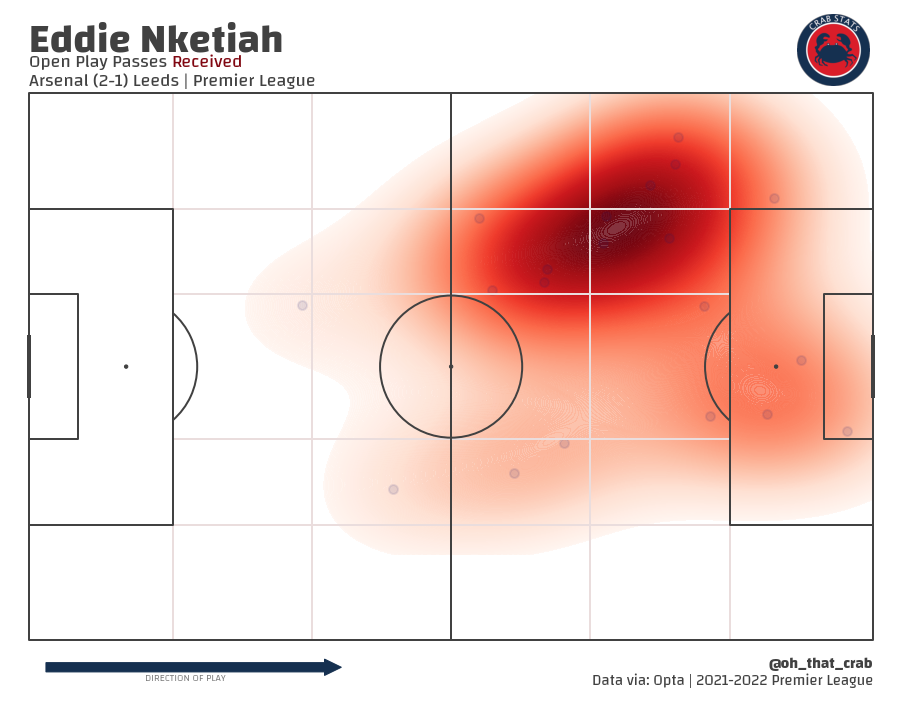 Nketiah is showing what a striker with a different profile can add to the Arsenal attack with his performances over the last few matches. This isn’t to say that Alexandre Lacazette is bad but I do think that what he was doing was becoming a bit stale with plenty of tape on the patterns of play that he wants and a clear pattern was emerging where centrebacks were starting to crowd the spaces he wanted to occupy and neutralize some of his interplays.

Nketiah doesn’t have that same track record and there isn’t a set game plan for what to do when he is in yet. His knack for making runs has opened spaces for the attacking midfielders and his build-up play while maybe not as good as Lacazette’s as been perfectly acceptable. He has also added an additional threat with his ability to win the ball back pressing, starting dangerous quick counters several times since he has come in as the starter.

Even if this run doesn’t lead to him staying with Arsenal long-term, Nketiah has done well for himself and looks set to earn himself more playing time somewhere.

Sources: Opta via whoscored, statszone, my own database. Statsbomb via fbref.

Yeah, I knew objectively that Arsenal were completely dominant, as much as in a cup game game against a lower-division side, but that didn’t stop me from a near nervous breakdown.

One interesting thing from these statistics, I think, is how Odegaard, who was still very good, doesn’t control the game as much when Partey is absent and Cedric is at fullback. I probably rate Cedric a bit higher than most Arsenal supporters, but Tomiyasu made a real difference on the left.

3 points, the most important number by far.

Let’s hope for the same on Thursday!!!

52% – Percentage of *Arsenal* passes that were in Arsenal’s own half
81% – Percentage of *Leeds* passes that were in Leeds’s own half
﻿
*Arsenal averaged starting their possession 60 meters from goal while Leeds averaged starting theirs 74 meters from goal* – Arsenal got the ball higher up the pitch than Leeds (on average just inside their own half) while Leeds got possession near their penalty box – which ties into why Leeds’ % of passes was higher in their own half.

Those are the passes for each team that were in their defensive half.

Are you afraid to say that Nketiah is better than Lacazette?

Scrolling through my twitter timeline i’ve seen plenty of people saying “thanks nketiah, but you’re not good enought to be here long term”. WTF are those people thinking? the guy is 22! Same age as Isak and Vlahovic, imagine how many goals would he be scoring in Fiorentina or Real Sociedad against far inferior teams. He is England’s u21 record scorer and if he was breaking through Pallace or something people would be all over signing him for the potential, not every player is a Saka or ESR and eases into first team that easily, sometimes it takes more time… Read more »

I think people, and myself included, have been influenced by how long Eddie has been around the first team. Like you said, he is only 22. So yeah, Eddie at 22 is not good enough to lead the line for a team with top 4 asperations and beyond. But he is good enough to be a #2 option today, and with the way he keeps improving, he has not hit his ceiling and could be good enough at 24 or 25. Plus he is English so worth more $$$$. Luckily Arsenal management want him, but will he sign?

Also another Hale Ender. Would love to keep him due to that as well as his recent steps forward and his potential.

We will be in Europe next year, so there will be more opportunities for a lot of players. Including a #2 striker.
It’s looking like at least in part, he did need the minutes to get integrated. Makes sense.
He’s probably not ever going to make us forget Ian Wright or Thierry. But seems like he could be a very useful second option. Certainly better than Laca.

Question is, will he be OK with that?

i was going to upvote you as i concur with most of your comment, but i just can’t get past the “against far inferior teams” bit of defamation of serie a and la liga. i am not at all convinced that e.g. southampton is better than cadiz or bologna.

OK, own up.
Who was it who tasered Elneny when that picture was taken?

If Leeds had got that 2nd goal I would be in the market for a new TV. Was not fun watching that last 15 min.Thanks Arsenal for saving my TV for another week.

Hi Scott – thanks for this as always. How can Expected Threat Created be a negative number? Thanks

See Laca over his last few games…though still interesting how it can be a negative!

Assuming it is gifting the oppo goals like the Leeds keeper did, hence creating a threat against your own team

Yeah, thought about that but the stat is in between Final Third Entries and Deep Touches so I assumed maybe wrongly that it had something to do with what happens when a team has the ball near the opponents’ goal.

Good analysis. Spot on with the observation that opposition teams are analysing our patterns and spaces our individuals prefer to operate. Who Eddie thrives playing alongside is starting to show too. With the team adjusting to his different types of movements than Laca. Great to see him improve his interceptions. That was a sorely lack part of his play. Seems he is more sure what he is supposed to do and is more confident on the ball now as others teammates are surrounding him to give him an easy option. If he can learn the art of: 1. Turning a… Read more »