Fabio Vieira has become Arsenal’s first major signing of the summer after his €35m arrival from FC Porto.

His arrival will provide much-needed depth and competition in creative midfield – an area severely lacking in numbers last season. Only Norwich gained fewer points from losing positions, as Mikel Arteta had virtually no other options that could come off the bench with the ability to find a killer pass or score a goal to change the outcome of a game.

Vieira made his first competitive appearance for Porto in 2020, and was named Euros U21s player of the tournament last summer. However, it was this past season the youngster truly made his breakthrough – providing 6 goals and 14 assists in just 15 starts in the Primeira Liga (27 appearances in total). He spent the majority of those minutes playing as an attacking midfielder. However, the playmaker also regularly slotted in as a second striker and spent time out wide, and deeper in central midfield. 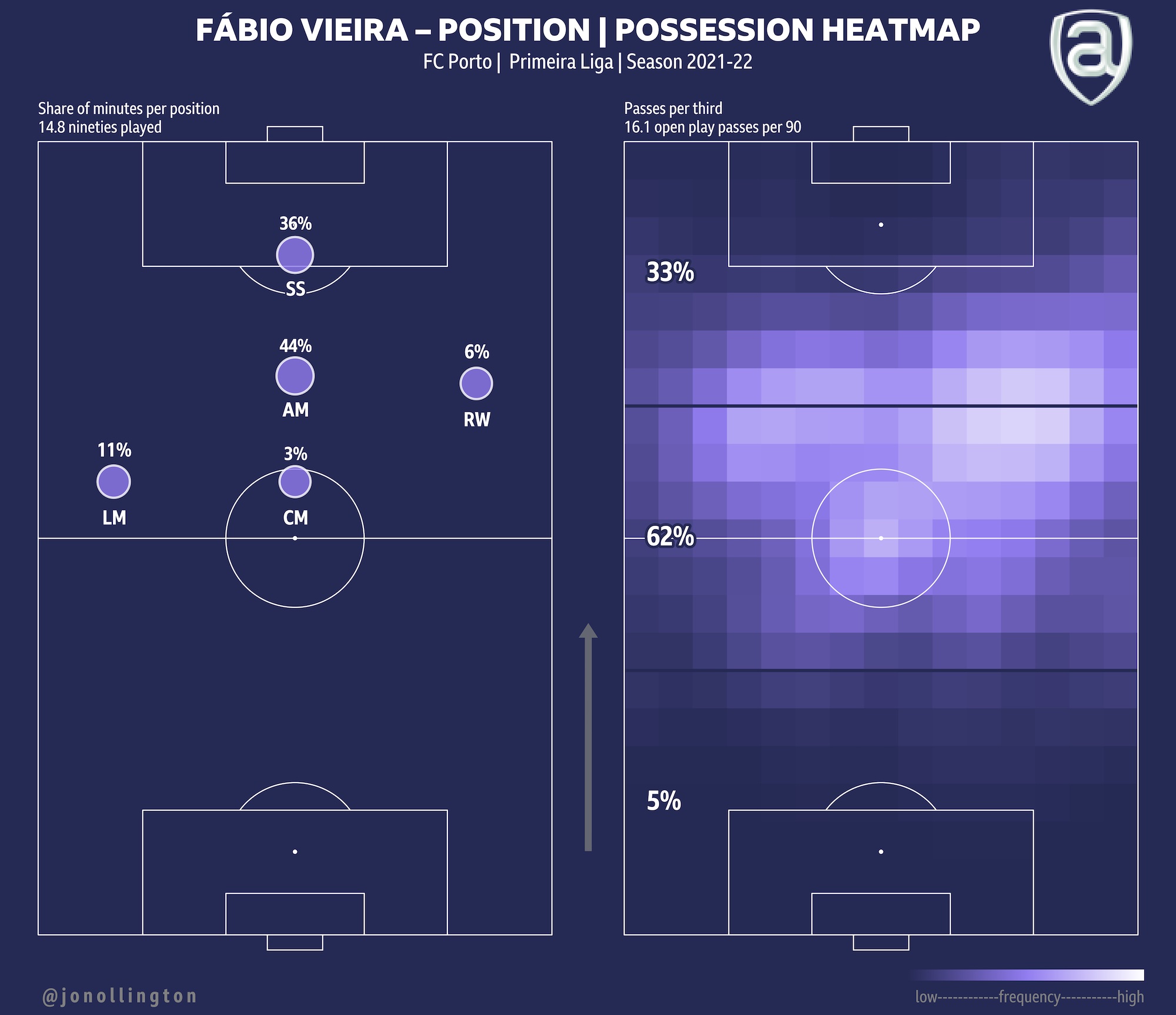 Positions aside, his pass-reception heat map below depicts a player given licence to roam, who looks for the ball in the second phase of play but who excels in picking it up in and around the penalty area. While the left-footer tends to occupy the right half-space, he’s equally adept across the pitch and will offer the versatility Arteta craves.

In the centre of the field, Vieira frequently moves into gaps between the opposition’s midfield and defence to make himself available. This, combined with the way he uses the ball and the types of passes he makes, makes him an exciting addition. His passing range (as shown by the pass radar, bottom right) is diverse, indicating a preference for longer, more difficult passes. 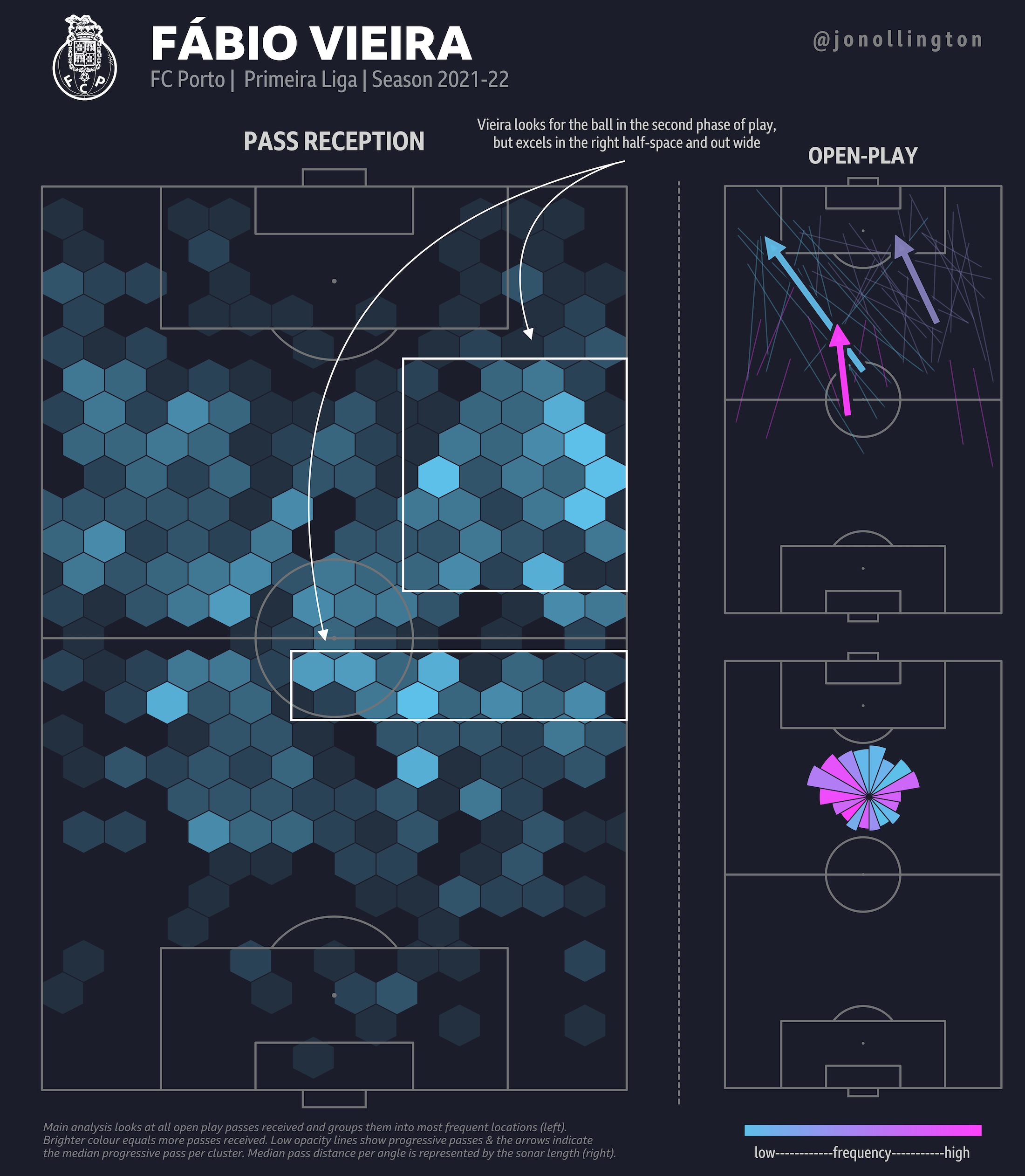 In possession, the new recruit has the tools to not only recycle the ball well (83% of his 16.1 passes per 90 played last season found a teammate), but also to advance his team up the pitch (6.8 of those passes per 90 were deep progressions – illustrated in the top right).

His creative tendencies are further displayed in the Expected Threat visual below – a metric that shows how much players’ actions in possession increase their chances of scoring. Vieira ranked 3rd in the Primeira Liga amongst all midfielders with 700+ minutes, demonstrating his ability to play threatening passes and move his team closer to the opposition goal. 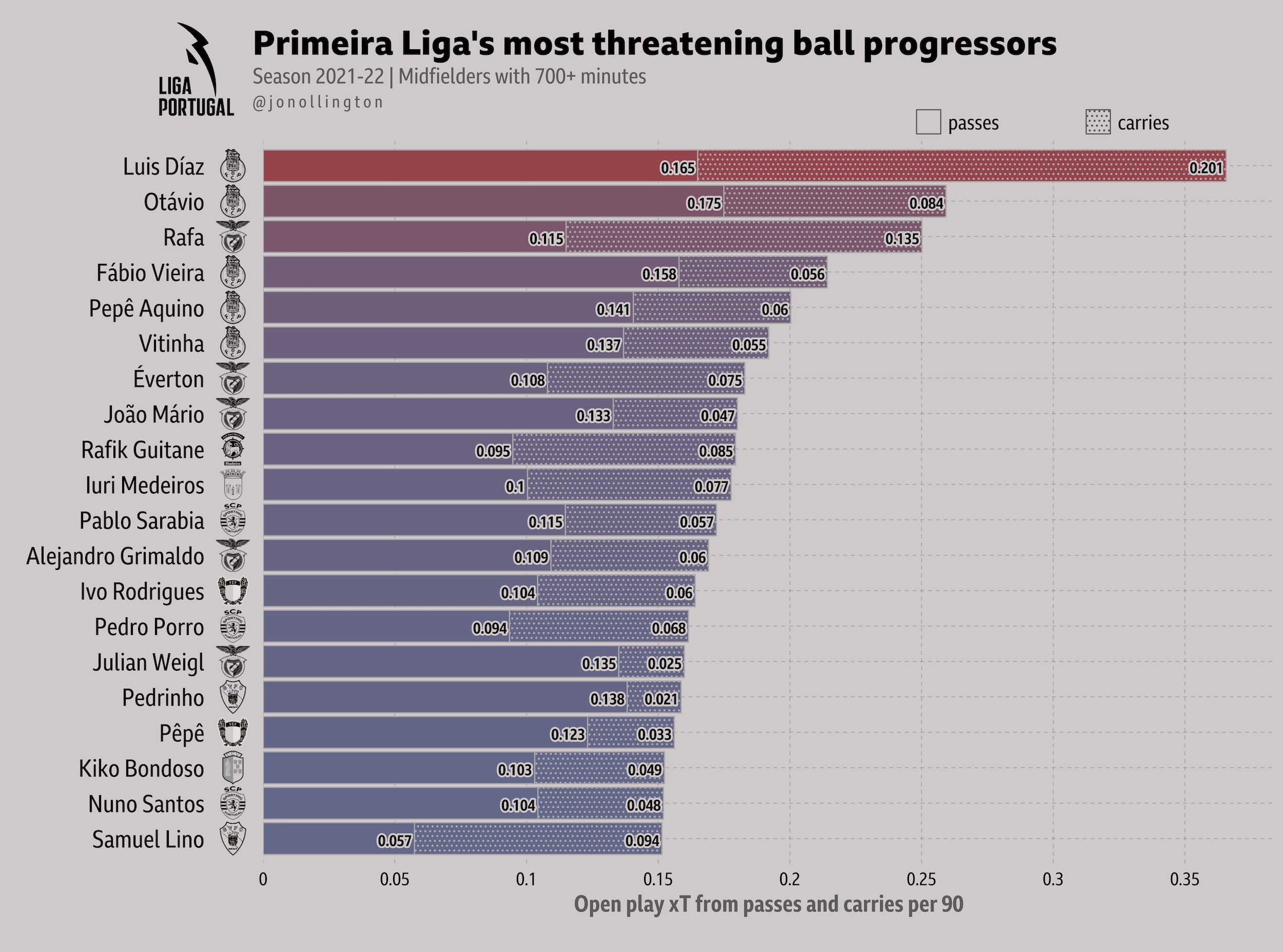 In terms of actual goal contributions per 90 minutes played, the Portuguese impressively ranked first across the Big Five leagues plus the Primeira Liga. While those numbers outperformed his underlying metrics, it comes as little surprise given he made 14 assists from just 34 chances created. That said, Vieira’s numbers are still promising and indicate an exciting acquisition with bags of potential to improve. 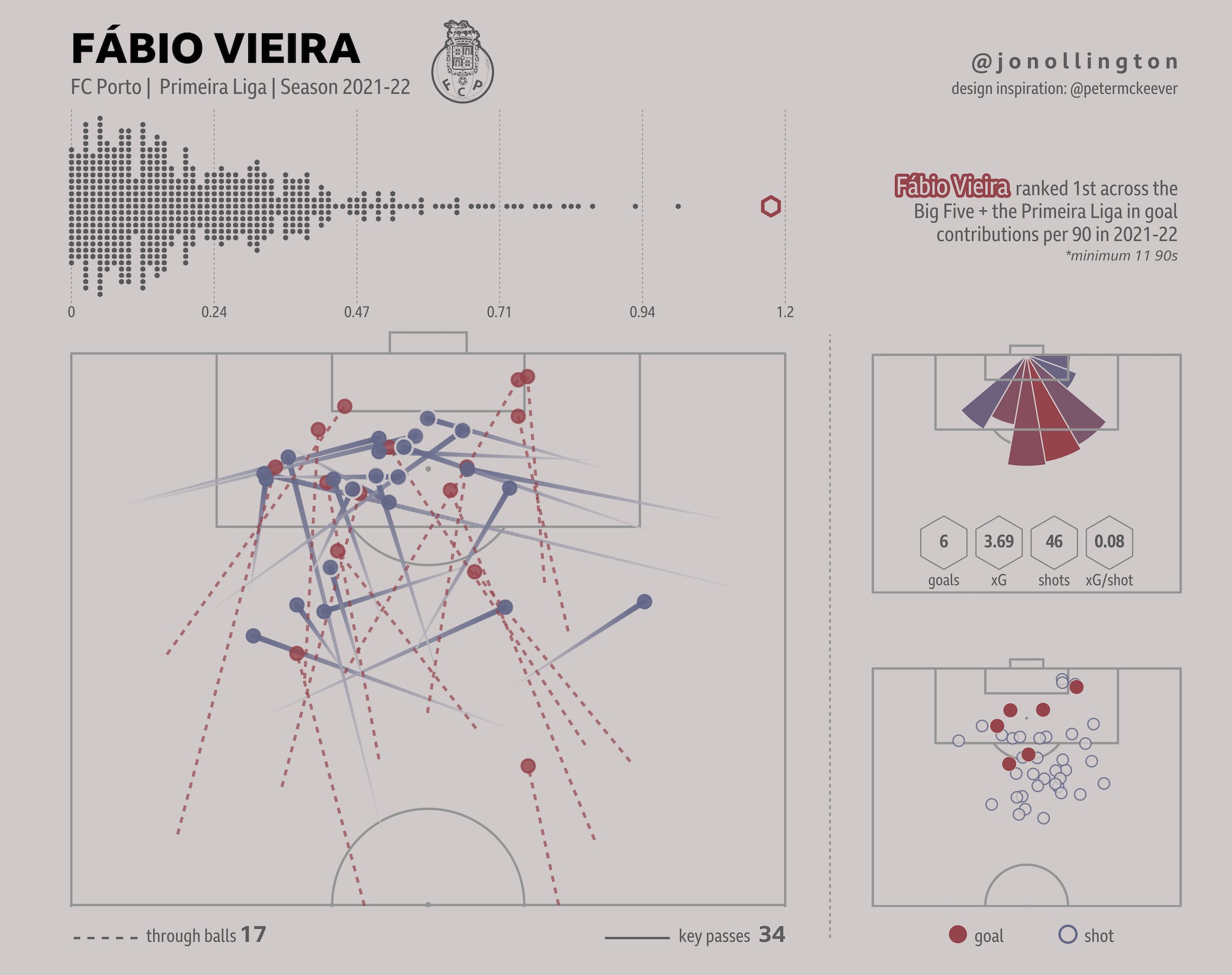 He looks proficient in front of goal, especially from mid to long range. Vieira isn’t blessed with natural power but demonstrates excellent shot placement. This ability enabled him to score six goals from 3.69 xG, firing off 2.8 shots per 90.

Adding a profile who excels in these qualities will reduce the over-reliance on Odegaard and Bukayo Saka, while also providing genuine competition who will challenge for the first team straight away.

The best teams don’t have backups; instead, they rotate players. Acquiring quality footballers who push for minutes rather than being a last resort will address the problem of throwing players into high-pressure games who haven’t played in months at the business end of the season.

To summarise, Arsenal are bringing in an advanced playmaker who enjoys not only having the ball, but also creating and finishing chances. He’s technically gifted and boasts a strong, weaker foot that aids his versatility.

Having just turned 22-years-old, Vieira’s age profile perfectly matches the recruitment policy and while player development isn’t always linear, you’d expect the youngster to grow under the tutelage of Arteta.

If Arsenal are to improve on last season’s 5th place finish, the club needs to add footballers with the ability and potential to bridge the gap between the first-choice players and their backups, and Fabio Vieira fits the bill.

Now stay on your feet a little longer than you did in Portugal. Don’t get me wrong I like him more than you do but his YouTube compilation has him a fall with ease

To be fair, the lad does look a bit frail. Hopefully we put him a diet of cream cakes to bulk him up a bit, along with Charlie Patino.

Yeah, him and Charlie need a few Big Macs and the occasional fish n chips.

I bet if Data Viz Jon and By The Numbers Scott ever bump into each other on a night out, there’s always the chance of a scuffle…

Everyone thinks they have the prettiest calculator at home.

Yo mumma so fat that when she went to maths class she tried to eat pi.

Yeah? Well yo momma so fat she thinks that xG stands for excellent gateau.

in this case I’d rather see the data viz than just the numbers!

Looking good on paper! Can’t wait to see him play and mature in the shirt.
Hate this long break in the season … But worth it!

Seems like a good buy, but now I want some muscles in the team. We can’t fight through a season with only lightweights in the team from midfield and forward. And I don’t understand why we’re looking for another central defender ( the Ajax guy), when Saliba is for inbound.

We now know that “vieira” means scallop in Portuguese, but here you are demanding mussels as well. Don’t be so shellfish.

Lisandro Martinez is seen as a potential left back AND holding mid on top of being a centre back. That’s why.

Are we building two squads O_O

We should be close to that, I remember before last season started, there was all these graphics showing how City, Chelsea, United each had 2 strong squads. Didn’t quite work out that way for some of those because well, football isn’t played on paper, or twitter for that matter. But with the way injuries screwed us over last season, we need plenty backup. We were playing so well, but every match I feared that there were up to 5 players or more on the squad that if they got injured, we would struggle to do without.

If i have to say arsenal are working with all energy to bring in quality signigns in order that there is a competition for the UEFa champions league qualification. Pretty like it when the team i support has more big ambissions .Big up to the new signing #Fabio viera👏👏 looking forward to seeing u play for us.#Arsenal

Welcome Vieira. Please bulk up, you are going to need them muscles.

He’s got that McLovin build lol

All sounds great, but I think we should address the elephant in the room: who told him that this goatee is a good idea?

Nothing wrong with signing the evil twin, maybe it’ll help us in the ‘housery department

After the news broke, I was looking up Porto results to see what position Vieira had played/how much he’d played/what he’d done, and what struck me was how the Porto manager seemed to constantly change formation from game to game.

All that is to say, that is probably why he played so many different positions.