There are still silly mistakes in this team but overall this was a comprehensive dominant performance against a team that not long ago was seen as usurping Arsenal’s spot among the top six.

Arsenal 4-2 Leicester City: By the graphics 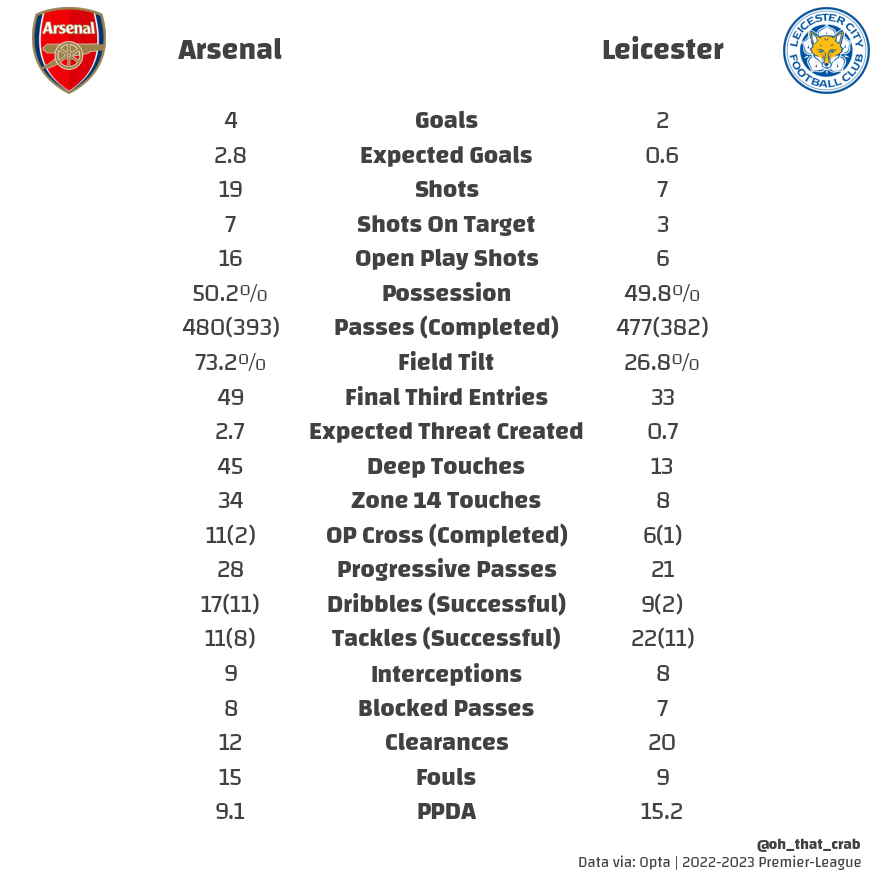 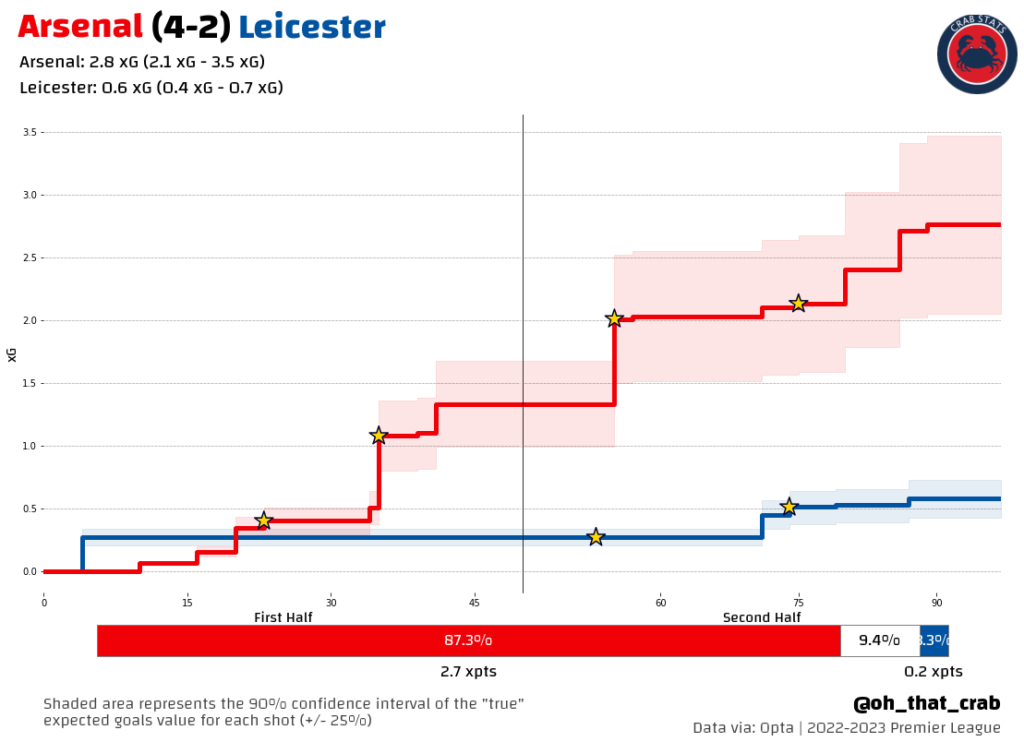 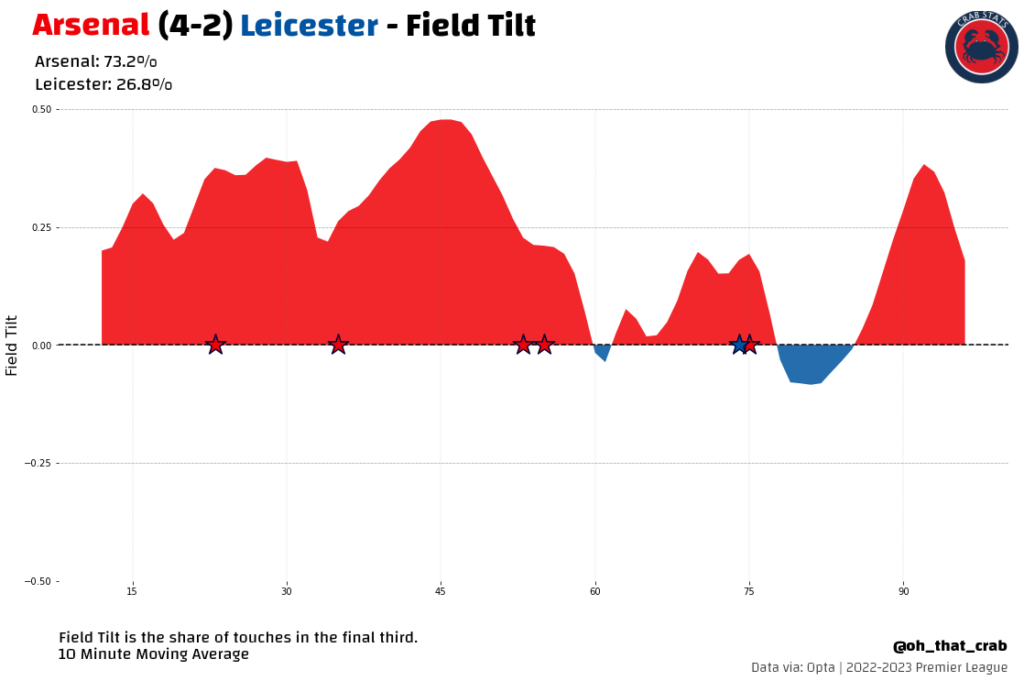 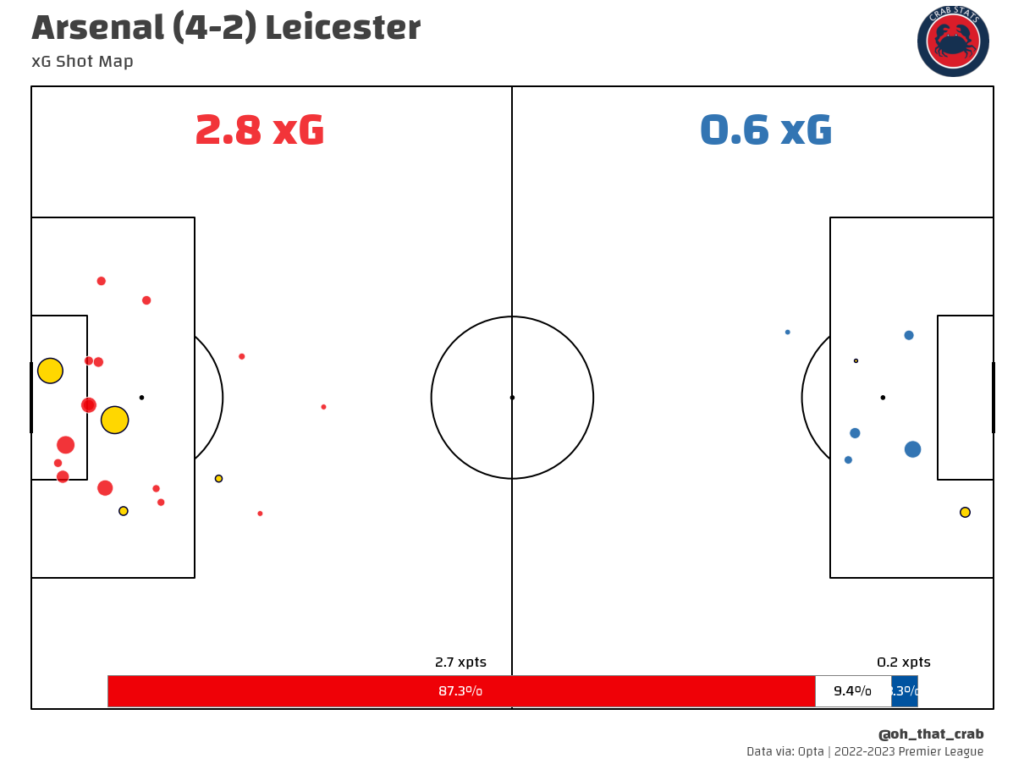 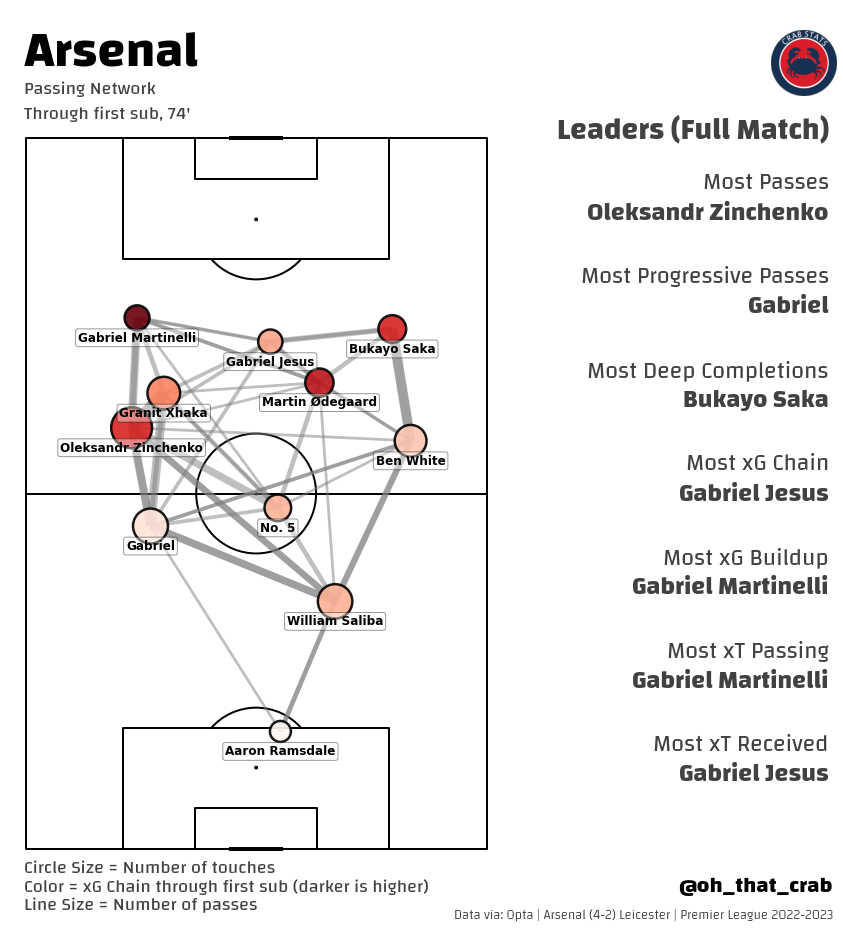 65 minutes of dominance, all stats below will be for the period from the 5th minute to the 71st minute for the match

7 – Passes completed into the box for Arsenal

1 – Passes completed into the box for Leicester City

29 – Touches within 25 meters of goal for Arsenal

2 – Touches within 25 meters of goal for Leicester City

192 – Touches in the final third for Arsenal

58 – Touches in the final third for Leicester City

One of the things from the opening match of the season against Crystal Palace was that Arsenal dominated for the first 30 minutes, and then did pretty well controlling space for the next 30. In this match, Arsenal were able to extend the dominance to 70 minutes and then did well to limit Leicester’s access into dangerous space for the whole match.

One of the things that I think really helps tell a story of how well a defense did is looking at how often the opposing team was able to get into the box against you, in this match Arsenal limited Leicester to just 13 touches in Arsenal’s box (Gabriel Jesus had more than the entire Leicester team with 15 in this match), that would have been tied for 6th fewest for Arsenal last season and would have been the 4th fewest that Leicester managed last season.

That is a very good omen, sure allowing two goals isn’t pretty on a score sheet but overall this was a very good defensive performance for Arsenal. 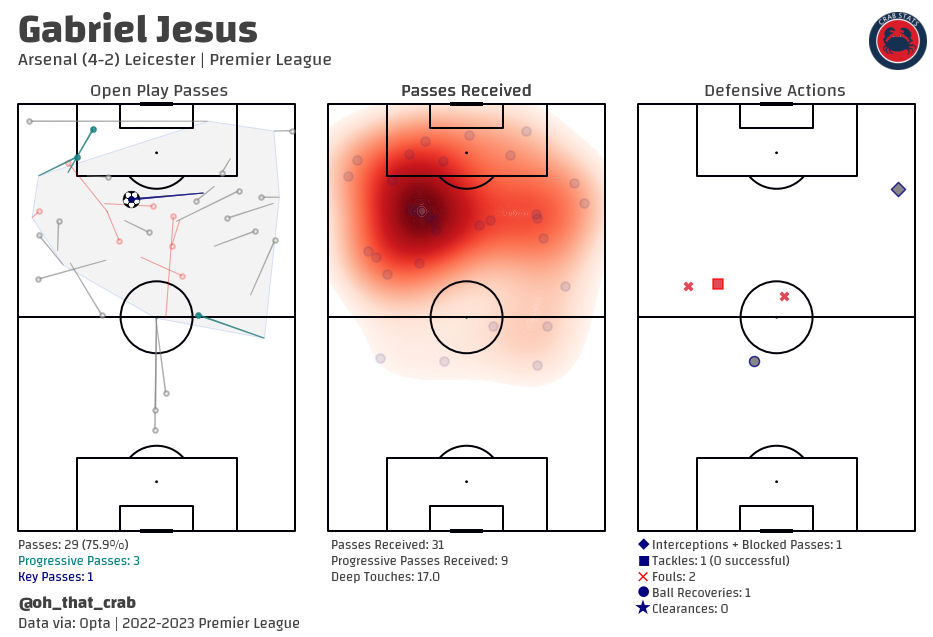 7 – Shots, led all players. He had more shots total by himself than Leicester did as a team.

3 – Shots on target, led all players. He had more shots on target total by himself than Leicester did as a team.

6 – Shot creating actions, tied for most for all players with Gabriel Martinelli

When Arsenal signed Jesus this is what I wrote about him:

“Jesus has his questions, how much of his performance is down to super team effects at City and just how bad and big of an issue is his finishing. He does come with quite a lot of very good boxes checked as well, he is a very good all-around player who has played and excelled in the Premier League, in a system not dissimilar to what Arsenal wants to do, while also having the connections to Arteta and Edu.

The fee is on the high side for a player with one year left on his deal, but not crazy (and maybe a discount) for a player of his talent while buying from within the Premier League. I think that this is a move that comes with a relatively low risk of a flop while still having some good potential upside where he blossoms into one of the top all-around forwards in the League.”

It has been just two weeks but I think that this still stands up on the good things about him and that the big question of how much was down to being a part of Manchester City is starting to not be a worry. I think looking forward we are going to think that his fee and impact on this team will be a bargain.

11 – Progressive carries for Oleksandr Zinchenko, leading all players. Zinchenko has been a nice complement to the skills that Kieren Tierney provides as a full back. His ability to interchange with Granit Xhaka has also been a very nice thing for Arsenal to be able to implement tactically.

6 – Interceptions for William Saliba, leading all players. Saliba had another solid game in defense even with his own goal (but at least he scored on his home debut!).

4 – Aerial Duels won by Ben White, leading all players. White had another good performance playing out of position on the right side.

Sources: Opta via Whoscored, StatsZone, my own database. StatsBomb via FBRef.

Team is looking great, well done to them, Edu and Arteta. Hope we keep it going (and Man U go down)!!

Really interesting stuff, Scott. One slight difference in interpretation: I think you numbers show that Odegaard is playing really well and that’s how I see it too. He doesn’t seem as central to our play because the players around him seem much more technically capable–Zinchenko v Tavares (and other experiments), Jesus v Lacazette, new Martinelli v old Martinelli– and also much more flexible in their movements (the same players, plus Xhaka). The result is we are not as dependent on Odegaard’s ability to spot a run and make a good pass in order to create danger. Unrelated to these stats:… Read more »

Diaminedave
Reply to  A Different George

I’ve been alternating between watching 1) highlights and analysis of our match, and 2) highlights and meltdown reactions of the brentford game and it’s been a beautiful Sunday.

Thanks Scott as always for your analysis. Just wanted to check a couple of things – your graphic suggests Gabriel ad the most progressive passes but text says Ødegaard – were they tied? Secondly, any reason you are able to expand upon as to why our number 5 is being referred to simply as No. 5 in your graphics so far this season? Apologies if I have missed this or am being dense.

The graphic shows data only up to the first sub (74’) which likely explains the progressive pass discrepancy you mentioned.

Because U.K. libel laws make it impossible to make any kind of statement about no. 5’s current legal proceedings until they are completed, but certain writers would still like to find a way of showing they’re not best pleased with the situation.

certain writers believe someone is guilty until proven innocent…

Certain writers understand that the laws as they currently stand do not favor victims in certain situations, and that just because an incident doesn’t necessarily meet the standard of criminality by the letter of these laws – at least not yet – does not negate the fact that they happened and that whichever way you cut it, they’re crummy.

Exactly. Uneccessary, pandering rubbish. How about we just wait and see how this all pans out without trying to act like judge and jury

I would ask for the same courtesy to not be the judge and jury for my actions as to what I am comfortable writing.

I am not going to go into a long response here as to be careful. I most certainly believe in innocent until proven guilty. This is one of the best features of the common law tradition. I am not against that and I don’t believe that you would find a comment from my that would contradict this. I think that there are a wide range of responses that reasonable people can support, they are not necessarily what I want or would wish to see but I can also understand they are not “wrong” or “unreasonable”. I come from a similar… Read more »

are we this first team to play with a perfume in midfield?

Only us and City with 100% record after two games. What a start to the season. Let’s keep up the momentum.

I wanted to ask about the Zinchenko and Xhaka interchange, it seems that we’ve been seeing Xhaka in a bit of a free role for box to box and Zinchenko slotting into his position at times, do you think this has something to do with Ben White playing RB and shifting into a sort of more secure 3 at the back when I’m the break? And is this what has been affecting the Saka and Odegaard interchange of late as we’ve noticed that they have been relatively quiet or outshined by that Martinelli and Zinchenko partnership of late? And then… Read more »

If I am being forced to choose a team to “like” besides my beloved Gunners, I am going for Man City!

I’m particularly fond of Brentford at the moment…….

Be interesting to do one of your stats comparison wheels for Jesus at Arsenal compared to at Man City….you probably need a few more games to do it but I for one would be interested!…if you ever get the time

That is a good point, I should look to remove those from the classification system.

I don’t often get to read this on the web, so much better than a phone as I can see the stats and charts more clearly. Really good work Scott and beautifully summarises the game. I particularly like the field tilt, really shows our dominance in this game over Palace.