THE LOWDOWN
Arsenal play Ajax in Amsterdam on Wednesday night knowing that winner takes all in the quest for a place in the UWCL group stage. The teams were tied 2-2 at Meadow Park last week in a back and forth encounter.

Ajax had the better of the first half, which finished 1-1 thanks to Stina Blackstenius’ equaliser. In the second half, the Gunners were all over Ajax and took the lead via Kim Little’s penalty and it looked a matter of time until Arsenal extended their advantage.

However, the visitors grabbed a late leveller against the run of play through young striker Romee Leuchter, whose movement caused the home side problems all evening. It left Arsenal feeling sucker punched and frustrated and leaves the tie in the balance on Wednesday.

For Jonas Eidevall’s team, it’s about repeating the second half, at least in terms of overall performance, and not the first. When quizzed on whether a tie this even should be a qualifier, Jonas Eidevall’s message was very clear, “we don’t want to talk like we are entitled to anything.” That’s the spirit Arsenal need to take into this game.

TEAM NEWS
Rafaelle is ok after going off during the North London derby with a kick, Teyah Goldie is still out with an ACL injury.

A WORD FROM THE BOSS
We’re constantly learning things and developing as a team, if you experience situations together and you learn from them, that’s when you mature as a team. That is what I strive for for us is to become a mature team that can deal with a lot of situations.

We are under no illusions, this will be a hard game. To win we will need to be good in attack, good in defence and good in transitions, good at set pieces. Playing away in Europe is tough, especially when you play a team as good as Ajax. So it us up to us to be the best we can be, if we can, I believe we will win.

THE OPPOSITION
Ajax played a high pressing style in the first leg which unsettled Arsenal in the first half. However, in the second half, Arsenal upped the ante and it was Ajax’s turn to struggle with the intensity of their opponents.

Jonas Eidevall’s team had a better time targeting the space behind Ajax’s full-backs in the second half and really should have extended their advantage prior to Ajax’s late equaliser. But with national team stars like Leuchter, deep lying playmaker Sherida Spitse and attacking midfielder Victoria Pelova, the hosts pack a lot of threat.

No matter the weather 🌧🫵#UWCL #AJAARS

PLAYER TO WATCH
Vivianne Miedema did not have her strongest game in the first leg. When Arsenal face high pressing opponents, the distances in their midfield can become a little too stretched, isolating Miedema and making the distance to Walti and Little too long.

In this scenario, Viv finds that she receives the ball with her back to goal and three opponents at her back. Beth Mead had a quiet first leg and this was because Ajax were able to stop Miedema spinning and playing the ball to her flank.

Arsenal will need to make those distances a little closer so that Miedema can influence the game more than she did last week. Though this was far less a problem in the second half at Meadow Park. Viv has also found her goal scoring range with a brace against Tottenham on Saturday. 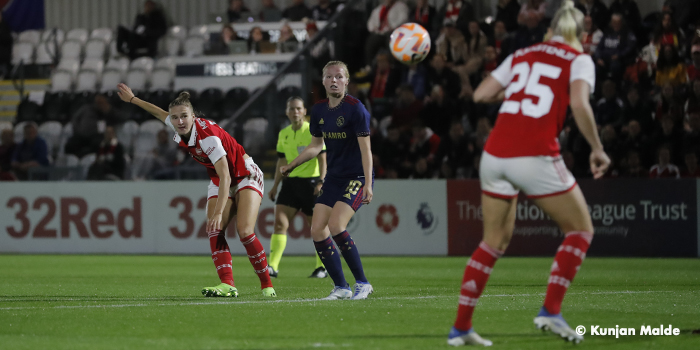 HOW TO CATCH THE GAME
The match kicks off at 6pm UK time and will be streamed live on Arsenal.com

COMING UP
We’ll have post-match reaction from Jonas Eidevall and a player on the site on Wednesday evening. We will also have a vlog from Amsterdam, including the open training session at the stadium on Tuesday evening and the build-up to the game on Wednesday. I will also be putting out some fan-focused content from the match too. Week commencing 10th October, during the international break, we have another big exclusive guest on the Arsenal Women Arsecast too.

The game will be streamed live on Arsenal.com.

Should be another intense game of football with high stakes. Looking forward to it

I’m split between being nervous but also excited that the squad gets to play some meaningful matches right at the start of the season. Will be tuning in from Canada, COYG!