Arsenal Women: It’s going to be a big season for…

The 2022-23 season gets underway for Arsenal Women this week with a home game against Brighton at Meadow Park on Friday night. Despite the postponement of the Manchester City game, September is still a huge month for Jonas Eidevall’s side, with a North London derby at home to Spurs in front of over 40,000 fans at Emirates Stadium and a two-legged Champions League qualifier against Ajax to negotiate to qualify for the group stage.

Tim Stillman picks out three players to watch for 2022-23. 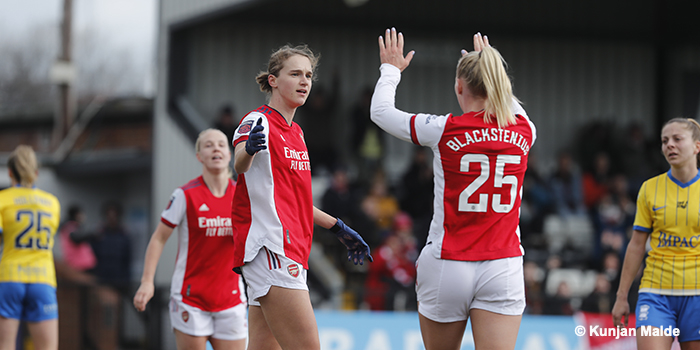 The Swedish striker arrived from Hacken in January and her arrival immediately heralded a switch up in play from the Gunners. A lot of fans found the signing a curious one given the presence of Vivianne Miedema. Indeed, Arseblog News was moved to ask whether Eidevall could envisage the pair playing together given the pedigree of both players.

Eidevall hinted at his vision prior to Blackstenius’ debut. “When space gets limited in the initial phases of possession, it could be a good idea to have a player like Viv deeper maybe playing as a 10 to help us to create.” That is exactly what happened, from February 11th onwards, Miedema did not play as a centre-forward again, with Blackstenius taking up the role (occasionally Caitlin Foord took it up too).

Last October, I noticed that Miedema was regularly being substituted, so much so that I asked Jonas about it. What quickly became clear was that Jonas wanted something different from a centre-forward and Stina’s arrival crystalized that. While Miedema is a 9 and a half, drifting deep to come and meet the ball, Eidevall wants a more traditional type of striker.

Blackstenius is exactly that, she pushes defences back with her runs, particularly with her forays into the channel off the ball. Her average shot distance from last season was 8.8 yards, which tells you about her penalty area predatory skills. She is a meticulous finisher too, she scored six WSL goals from 4.7XG, which is not bad from seven WSL starts.

However, the second half of last season was Stina’s acclimatisation time. She arrived at the club off the back of the conclusion of the Damallsvenskan in November having had no pre-season to speak of. Now she has had a few months at Arsenal and time with her new teammates this summer, her international colleague Lina Hurtig has joined the club. Last season we saw good Stina, this season I expect to see excellent Stina. 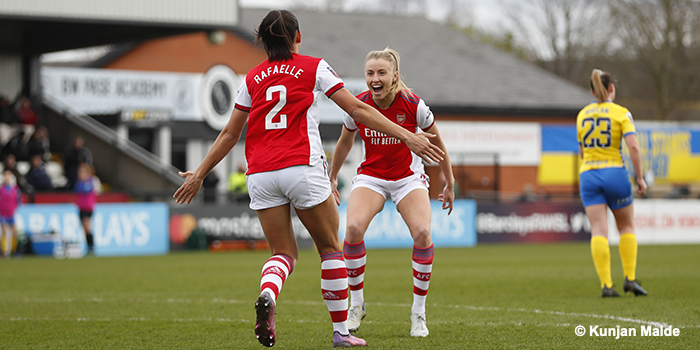 Another of Arsenal’s January signings and, like Stina, Rafa arrived off the back of a Brazilian domestic season that finished in November. Rafa’s lack of a pre-season carried more of a physical tariff as she picked up a calf injury in early March from which she didn’t recover. It was obvious from her first appearance that Rafa improved the Arsenal team.

Jonas already had Jen Beattie, Simone Boye and Lotte Wubben-Moy at his disposal to partner Leah Williamson in defence. But all of these players were right-footed, Beattie’s ability to play three times a week was becoming doubtful in the face of multiple muscular injuries and a cancer diagnoses in the winter of 2020, Boye was a stopgap signing and Wubben-Moy was injured for a lot of last winter in any case.

Rafa’s crisp left-foot made her a far more natural partner for Williamson, as did her range of long and short distribution. At the age of 31, she also has the physical properties to complement Williamson at the heart of the defence. What’s more, during her injury enforced absence Lotte Wubben-Moy came into the team and performed very well, so Rafa’s place is subject to competition.

The left centre-half role is a very important one in the Arsenal team, be it Katie McCabe or Steph Catley, the left-back pushes on a lot more than Noelle Maritz or Laura Wienroither at right-back so covering the space in behind them. This is a role Rafa is used to in the Brazilian national team with Tamires pushing on from left-back. If Rafa can stay fit this time around, she will have two objectives- resist the strong competition from Wubben-Moy and build a strong partnership with Williamson. 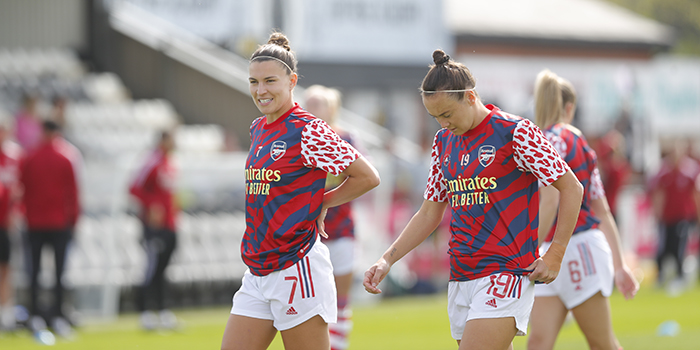 The Australian’s first season in England was decimated by a recurring hamstring injury that eventually required surgery. She amassed only 234 minutes in 2020-21. Last season, she played 2,404. While Caitlin Foord’s post Asia Cup form was widely vaunted, Catley’s was just as impressive even if she received fewer plaudits.

Catley started 13 of Arsenal’s last 15 games following the conclusion of the Asia Cup in January. On one of those occasions she was rested for an FA Cup game against Coventry United and, in the other, she was the first player off the bench in the 62nd minute. She quietly made the left-back slot her own with Katie McCabe either playing on the left-wing or sitting on the bench.

Steph had 2.94 shot creating actions per 90 last season which is a very high number from a full-back (she started one WSL game at centre-half too). To put things into perspective, that’s more than Kim Little, Mana Iwabuchi, Nikita Parris and Tobin Heath. Only Beth Mead and Caitlin Foord touched the ball in the final third more often per 90. She struck up good relationships with both Katie McCabe and Caitlin Foord on the left-wing.

In the second half of last season, the Australian showed why Arsenal had to fight off very fierce competition for her signature when they signed her in 2020. Catley’s setpiece delivery is another significant weapon in her armoury. She favours the in-swinger on her left foot. She had 0.91 shot creating actions per 90 from setpieces last season, that’s more or less a shot a game from dead ball deliveries into the box, which is very good going.

The challenge now for Steph is to maintain and build on that form. With Katie McCabe in the squad, her place is under intense competition and her level will need to stay very high to ward her off. Now age 27 with a new contract in her pocket, Catley is coming into her prime and Jonas Eidevall will look to the Matildas vice-captain to emerge as one of the leaders of this group.

Looks like the team is stepping upwards, we weren’t far off the top last season, one point,so let’s hope we can finish one place higher. It is sounding good from the above, lots of quality and competition in the squad.

That Birmingham defeat was the kicker, even if we’d taken a point we’d have won the league. Hopefully Jonas has learnt from that. Looking forward to Friday night

The 0-0 Chelsea draw did it for me when Viv put that half-volley off the post. Just 4″ left…..

Laura Wienroither played really well against England in the Euros. I’m expecting big things from her this season.

Love the picture of Rafaelle and Leah!

I thought Stine was excellent in the Euros. Three beautiful goals chalked off for marginal offsides.