It feels weird to see Arsenal draw, before this draw Arsenal haden’t drawn since January last season. That has been good for Arsenal getting points, especially because it seems like a fair amount of those mising draws have turned into wins.

It is a bit of a bummer to drop points in a match that was winnable but hard to get too down when there was a weekend of dropped points for Spurs, Liverpool, Chelsea, and Manchester United.

Southampton 1-1 Arsenal: By the graphics 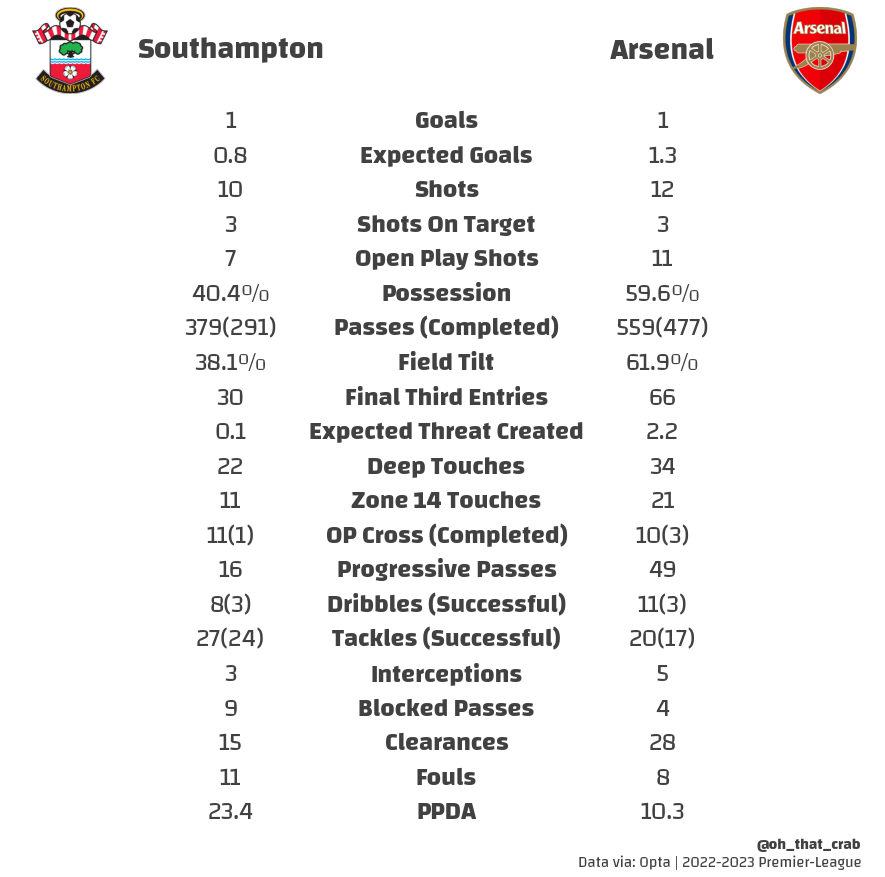 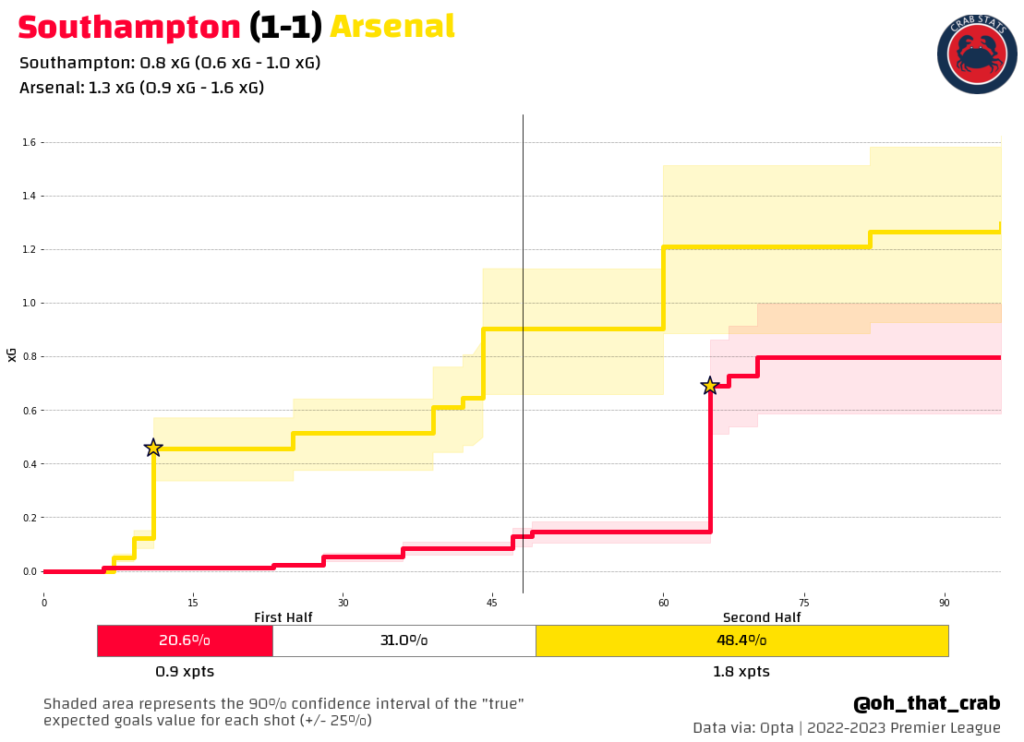 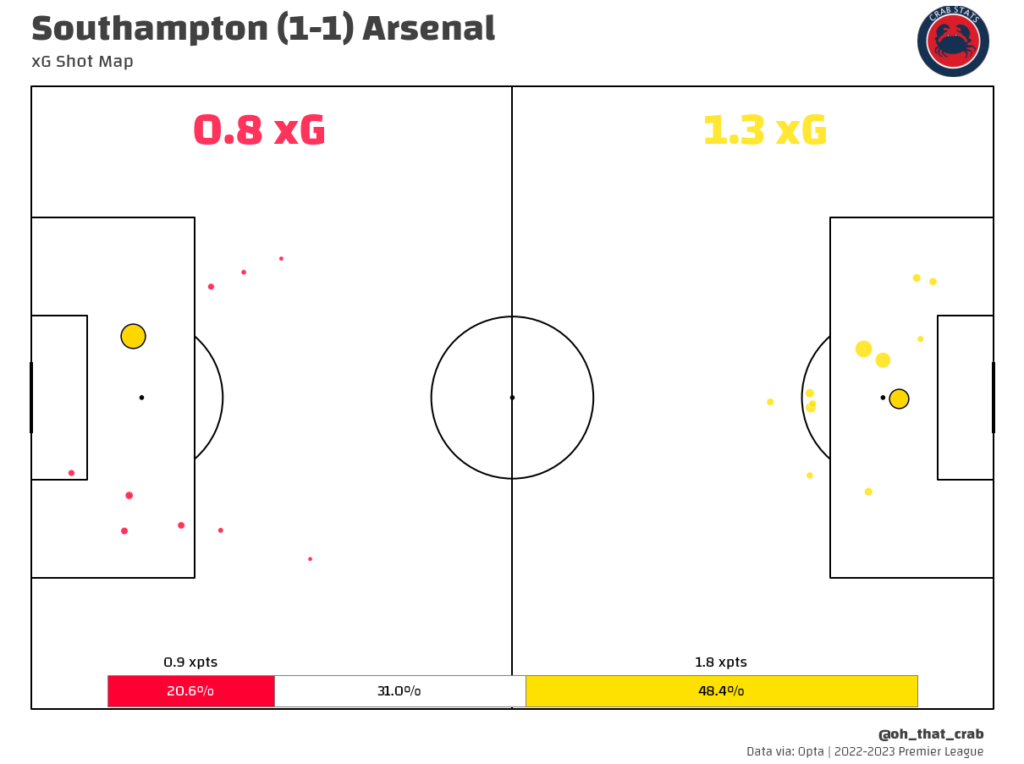 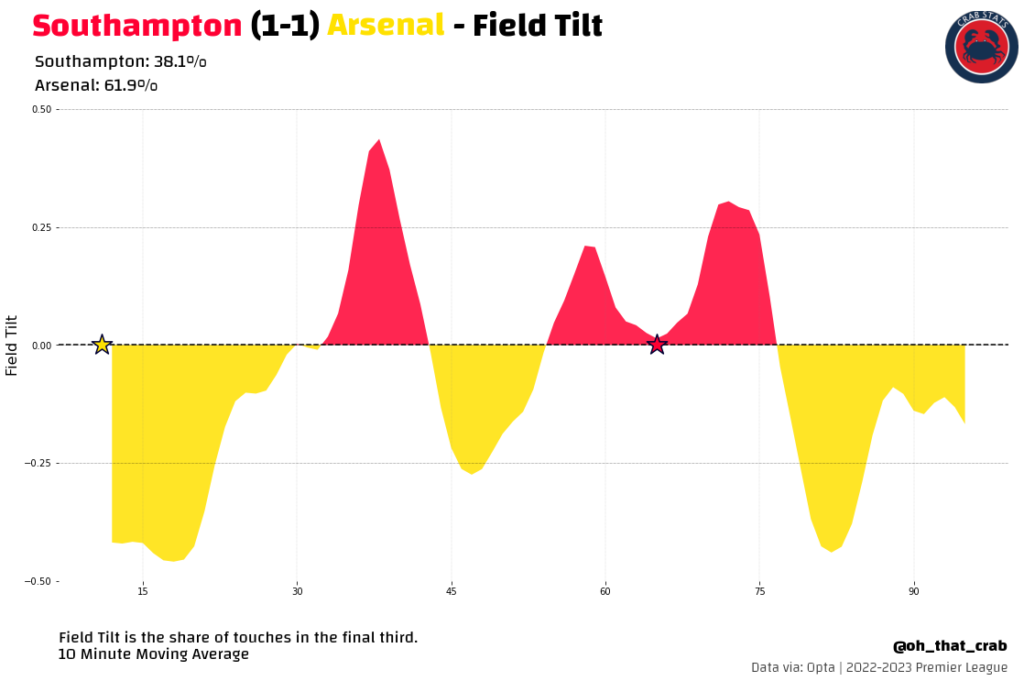 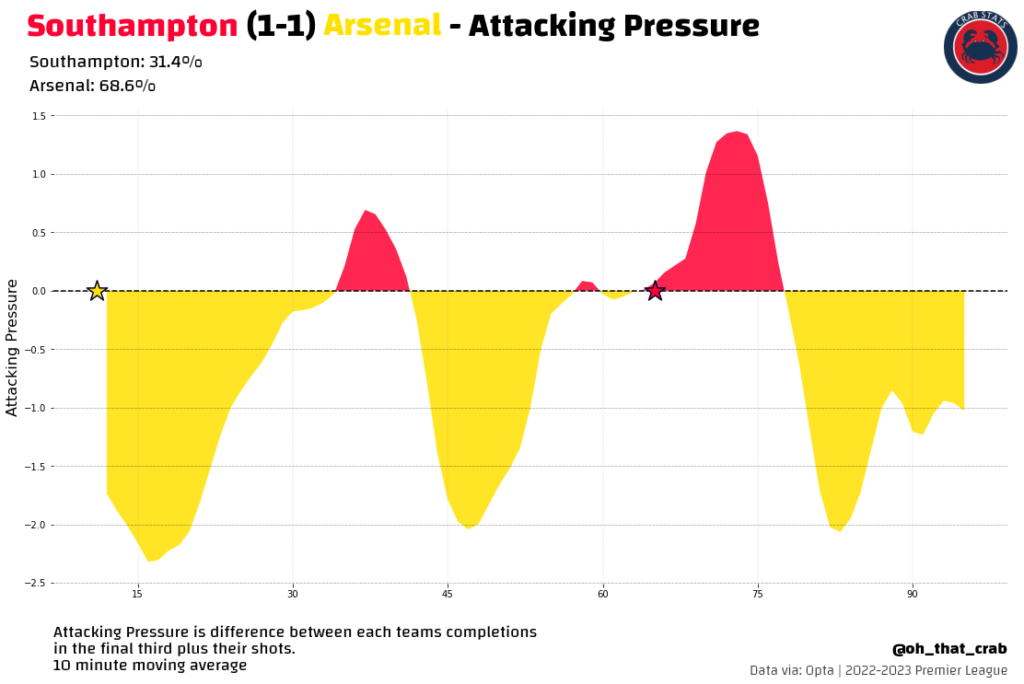 3 – Big chances for Arsenal in this match, 1 of those turned into a goal

12 – Shots for Arsenal in this match, this is the third match in a row in the Premier League where they have taken les than 14 shots, they had managed more than that in 6 of their opening 8 matches before that.

8 – Shots in the first half, with just 3 shots in the second half, and 2 shots after Southampton equalized.

0.9 – Expected goals for Arsenal in the first half, with just 0.4 in the second half, and just 0.09 after Southampton equalized.

38% – Chances that Arsenal only score 1 goal from the chances that they created. 39% that they score more than 1. 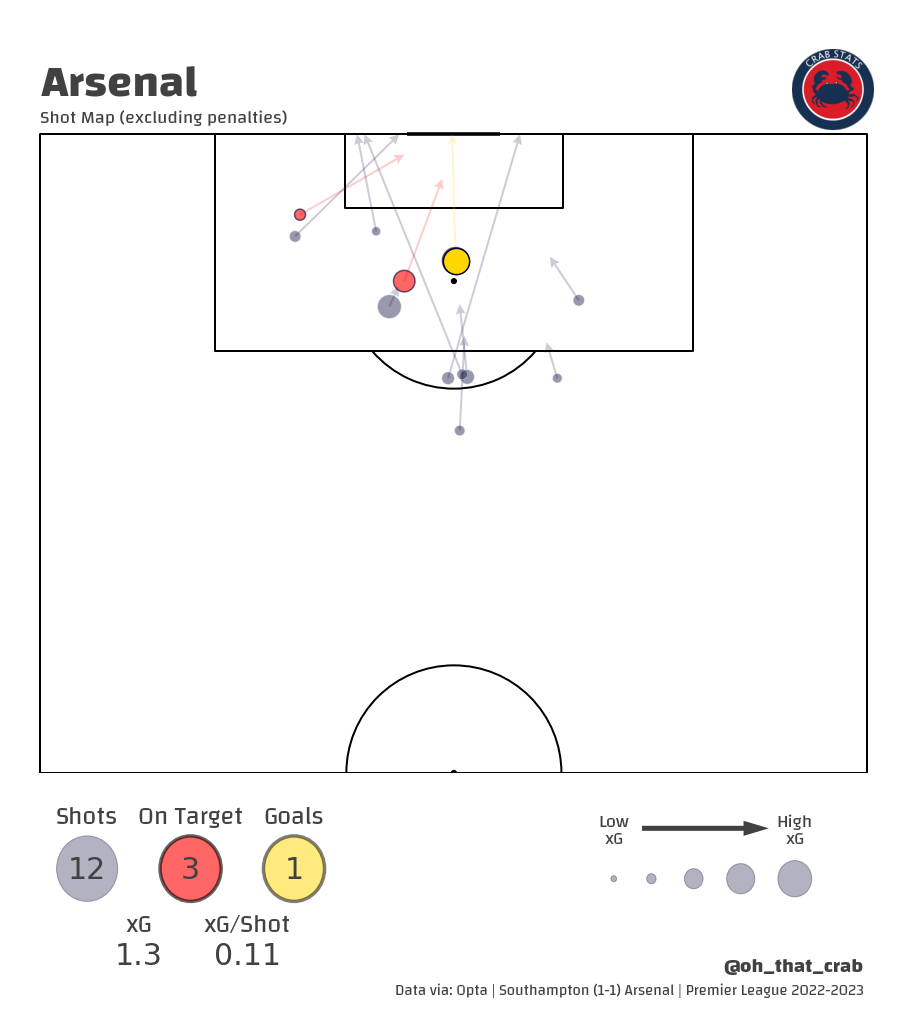 Arsenal got out to a fast start and looked set to roll to a pretty easy win. Even when Southampton put together a string of corner kicks to exert a little pressure this was still a match that looked like it was all Arsenal.  After half time things really took a turn for Arsenal where they came out looking tired and let Southampton back into it.

4 – Times Fouled (that were called at least)

Since the Liverpool match, Jesus has looked a bit off. I am not a doctor but I do wonder if he is still not quite at 100 percent after the blow to the head that he recieved in that match. He has also not seen the same levels of service that he was seeing to start the season, before the Leeds match he was getting 10.7 touches in the box per match but has had just 9 over the last two combined.

He did still end up with 4 shots and 0.6 expected goals but it was not great to see him retreating away from the penalty box as the match went on. In this match he seemed to be dropping deeper and deeper looking to get into the match, ultimately having more touches in the middle third than the final third. That could also be a reflection of what happens when you get bear hugged everytime you’re in the final third as well.

Gabriel is a rock at the back

He doesn’t have the catchy song but I think that this was a match where the fans owed an ode to Gabriel. I thought that he was immense in this match. With Southampton firing balls into the box left and right from crosses and long throws he was there taking care of those without too much fuss. He was also pivotal in turning a couple of sitiuations that could have been dangerous into things that didn’t hurt Arsenal.

I am glad that he was rewarded with a new contract, I think that he will be an important part of this team for a long time.

Sources: Opta via whoscored, my own database

do you have any info on partey’s ball retention/dispossessed stats? feels like he’s losing the ball in easy situations far more than he should and far more than he used to. we were sloppy in the second half and i thought he was one of the biggest culprits of that – but I’m often wrong about these things and the stats say otherwise.
great read again. Jesus looks like a confidence player, not sure why he’s short of it as he’s been great but he needs to get out of his own head and finish these chances.

A Different George
Reply to  Jules

My impression (and I’d love to see statistics) is that Partey was excellent, secure in receiving passes, quickly turning and immediately advancing the ball with complete assurance–until the last 20 minutes or so, when he was quite bad, misplaying almost every pass he tried. It seemed like (again, it was a real-time impression, not a careful re-watching) he had completely lost the plot, like a different player had been substituted.

True, we just have to win more than the others (particularly City).

No. I wish people would stop this. We need to win more than Chelsea, Spurs, Man United, apparently Newcastle, and (surprisingly) Liverpool. We have a reasonable chance of finishing ahead of all of them (again, surprisingly including Liverpool). That would be a stunningly successful season, and a platform for the near future.

Stop what? Aspiring to win the league after a fantastic start? I’m sure that’s the message Mikel is delivering to the players too. “Hey guys, you’re doing great, but let’s not be silly here, City are way better than us, let’s just try for 2nd or 3rd or 4th, ok?”

All the usual over use of ‘stats’ I do find tiresome these days.
Simply put , for the 3rd game
In 4 Arsenals 2nd half showing dropped . Arteta can say players are not tired but the evidence is there.
Jesus is now showing, after his blistering start, why City did not play him regularly.
This is reality biting

A Voice in the Noise
Reply to  Silentstan

We lost here last season and now we get a point. If we can keep turning last years defeats into draws and last years draws into wins we’ll be good 😃

And maintain the wins

I didn’t feel confident coming into this one, feels like our visits to the Saint’s are always a bit of a struggle the last few years. Still, can’t help feel a little frustrated by the stone-wall penalty that they chose to completely ignore (and show no replays of), and the other penalty that Saka got booked for diving on. Not only was he clearly tripped (foot was hooked blatantly in the footage), but he was also in the box when it happened. It was very clear Howard Webb and Robert Jones were having none of an Arsenal win in this… Read more »

We have to be careful with the playing 11. Some of them are not naturally that fit to give 110% throughout the season. Some rest to the legs would be great but it has its caveats like dropping points because not everyone is at same levels. Though next Europa league matches will give some time to rest but there are others who will be tested due to the world cup.

Gabriel M. has played most minutes 2nd to Xhaka, and he was solid today, I don’t think the excuse of fatigue holds any water really. Most teams in the top 6 have thesame number of games as we do play their best teams everytime, so we just have to find a way to cope.

I take your point about the same number of games, but a key factor is the strength and depth of the squad isn’t it? Arteta wouldn’t have to play so many first team players against, say, PSV if the squad had been stronger. I’m sure he would have preferred to rest Jesus and a few others (who looked tired yesterday) but couldn’t risk missing out on getting all the points against PSV (and it’s EL after all not CL where you would pick the best available because you’re generally playing some of the best). I think that some other teams… Read more »

Three of our rivals for top four–Man City, Chelsea, and Man United–have significantly deeper squads than Arsenal, in the sense that they can replace many of their starters with another who would sometimes be the manager’s first choice in an important match. We have only three players who fit that category (Smith Rowe, Zinchenko, Tierney), two of whom are injured. Spurs, Liverpool, and Newcastle are similar to us in that respect.

Xg if we had a competent referee would have been a way higher.. Jesus throgh on goal etc

October was always going to a very testing month (and the fun isn’t over yet) but, overall, Arsenal have come through it well even allowing for yesterday’s disappointing result. However, it must be clear to everyone now (and most importantly Arteta/Edu) that the squad as a whole just hasn’t got the strength in depth needed to sustain a challenge across multiple competitions. Jesus and others looked tired yesterday – so much for expecting players to put in 70 games a season and maintain performance. You may get the first, you’ll get the second in far fewer cases. Let’s hope we… Read more »

Great piece as always. This match highlights how xG only tells half the story. If Tierney’s a fraction of a second quicker we score but that counts as 0.00 xG. If the ref was competent we’d get a penalty and 0.85 xG, instead we end up with 0.00 xG added for that chance.

“12 – Shots for Arsenal in this match, this is the third match in a row in the Premier League where they have taken les than 14 shots, they had managed more than that in 6 of their opening 8 matches before that.
8 – Shots in the first half, with just 3 shots in the second half”

8+3=11. Something does not add up here, unless one of their shots took place during half-time.