If you’re looking for the silver lining Arsenal grew their lead at the top of the table and stopped the team in third place that is chasing them from gaining any ground. That might not feel good after the match but this was not a BAD result for Arsenal, especially on a quick turnaround with a squad that looks a bit stretched.

Arsenal 0-0 Newcastle: By the graphics 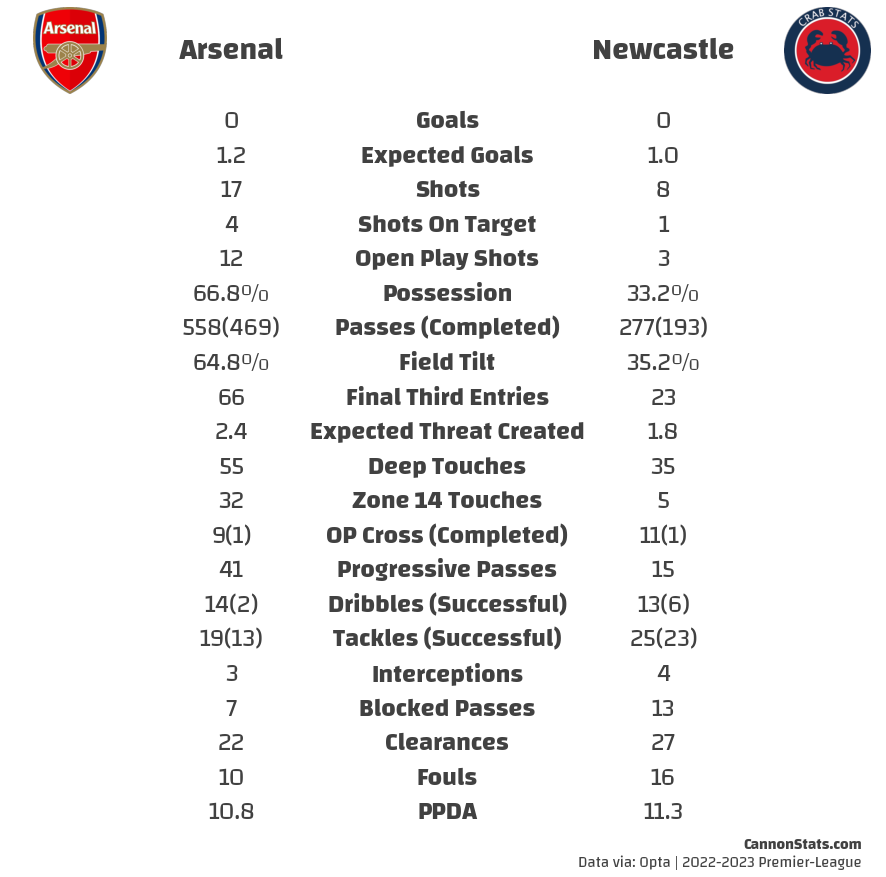 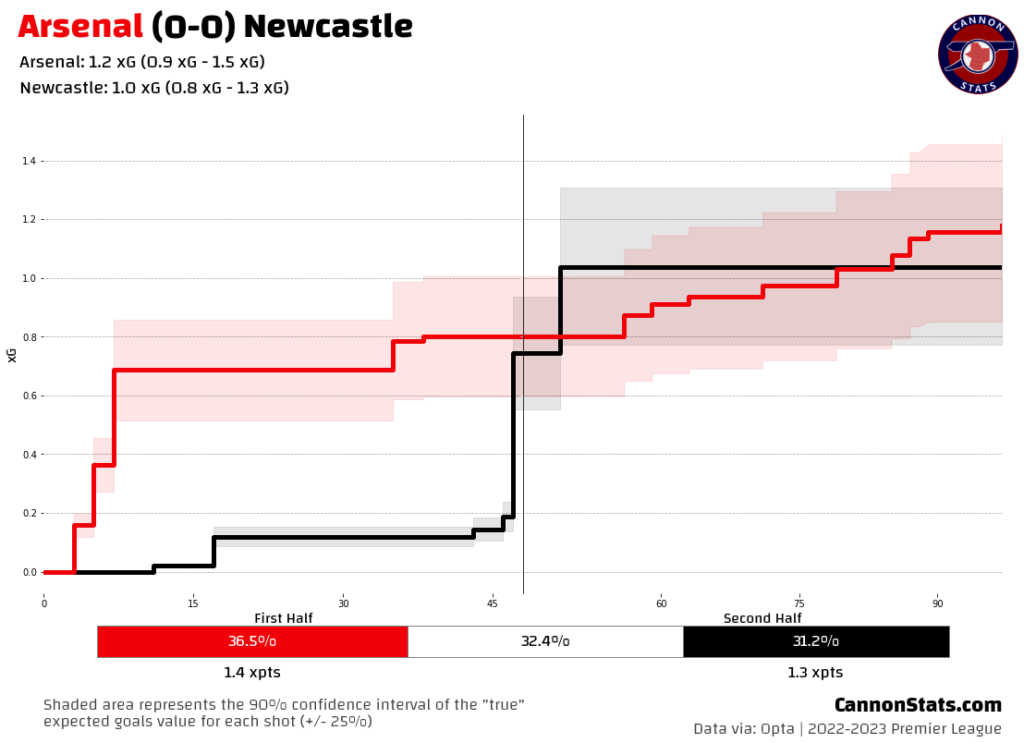 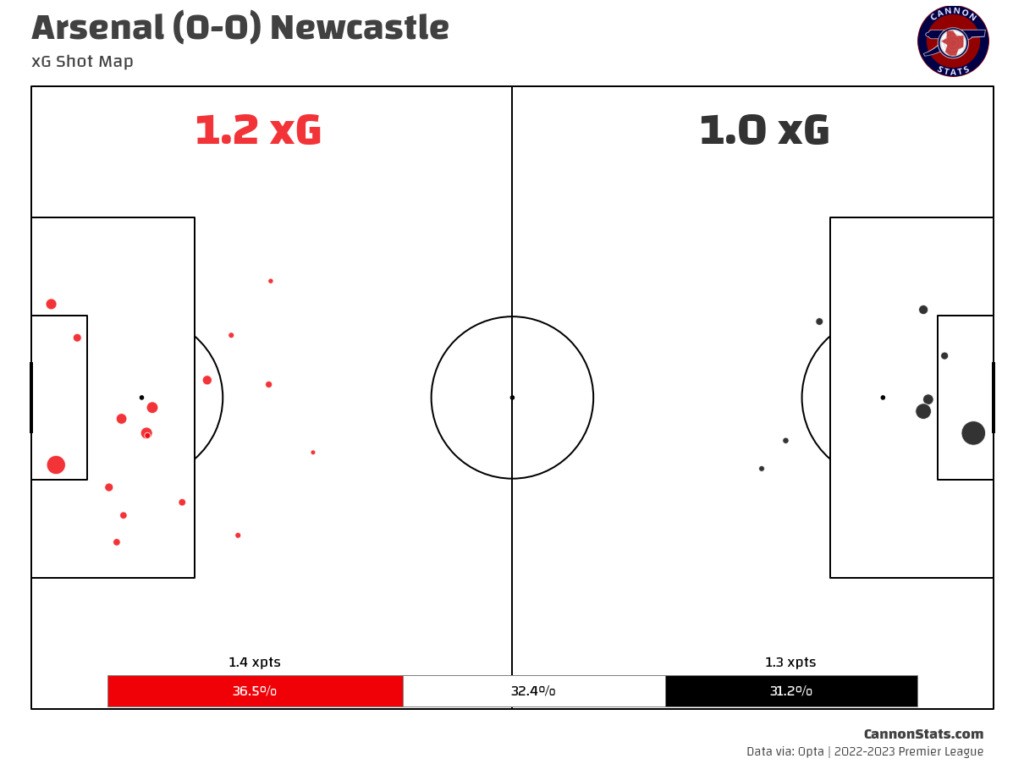 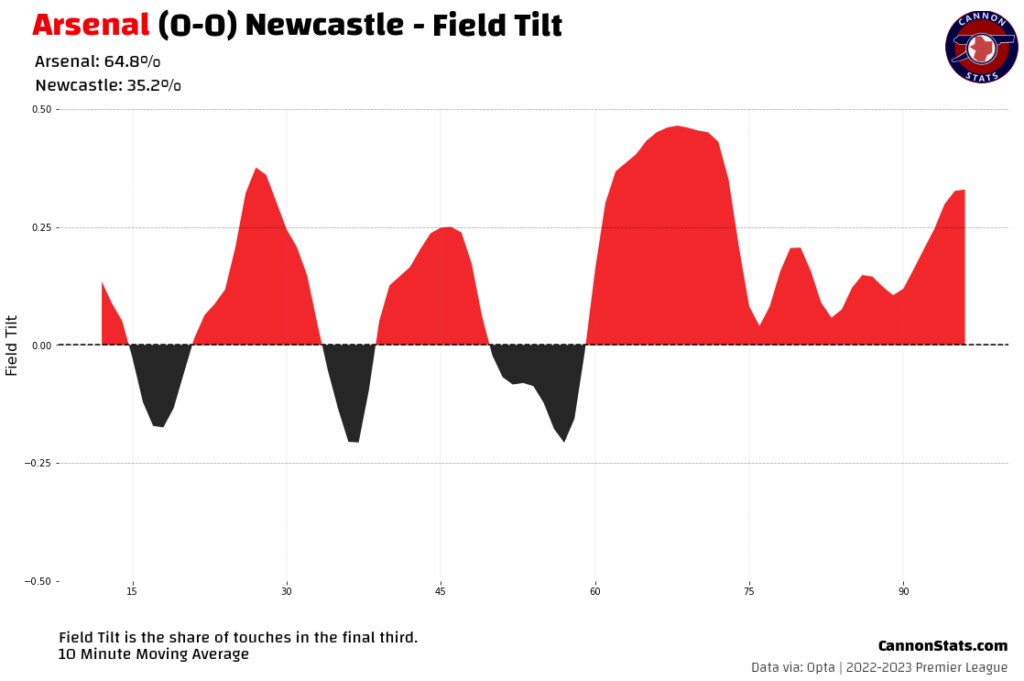 17 – Shots for Arsenal, that is the 4th most Newcastle have allowed in a match this season.

1.2 – Expected goals for Arsenal, that is the 4th lowest total for Arsenal in a match this season.

0.07 – Arsenal’s expected goal’s per shot attempt, this is the 3rd lowest average chance quality that Arsenal have managed this season. 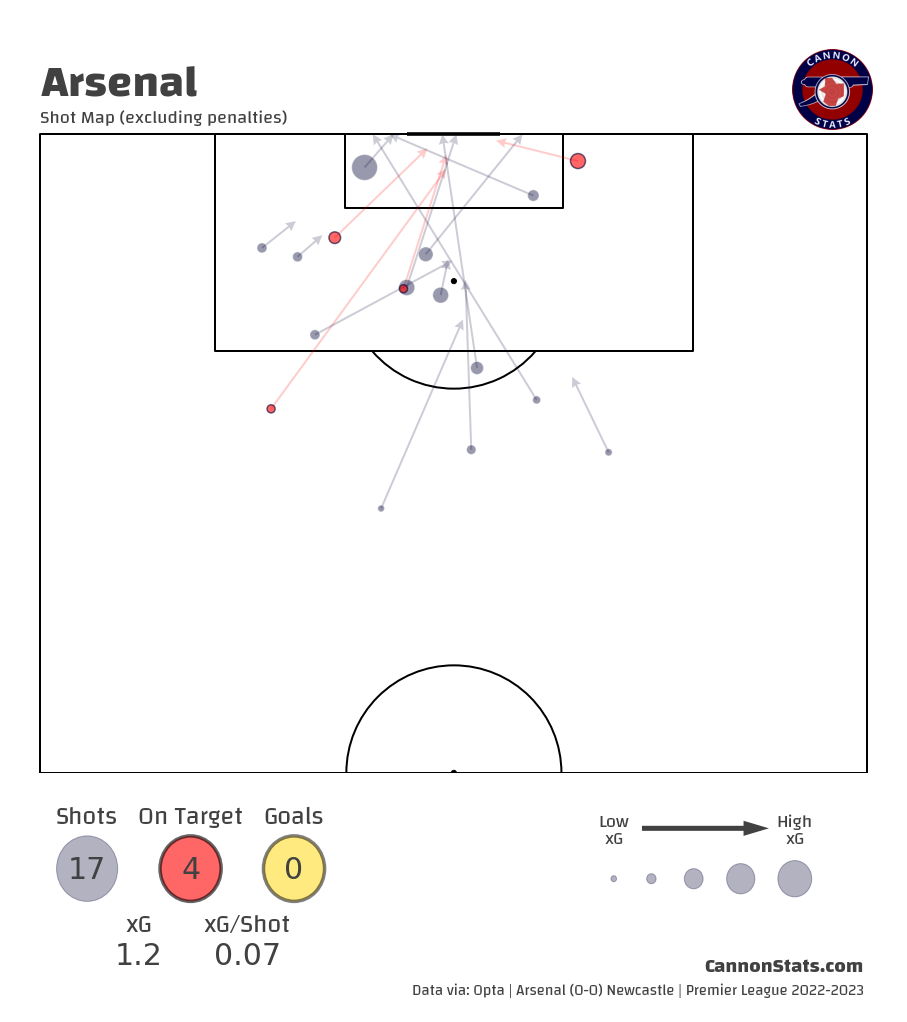 8 – Shots for Newcastle in this match, that is their 4th lowest this season

1.0 – Expected goals for Newcastle, that is their 5th lowest total this season 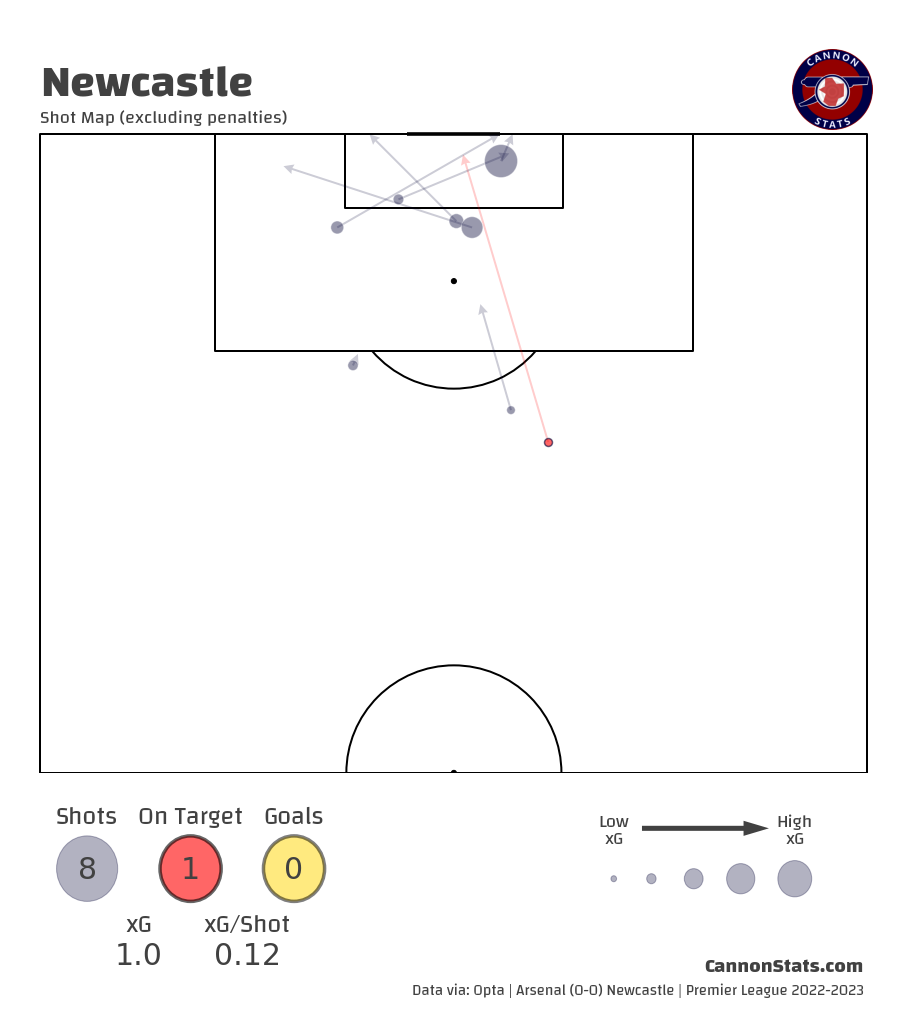 This was a game of tight margins. Newcastle had the best chance (it was still tough) but it was still a tough flicked on header that was hard to direct. Arsenal came out fast again and could have been up early for the second match in a row. In the opening 15 minutes Arsenal again dominated here is the stats:

14 – Touches in the box for Arsenal

1 – Touch in the box for Newcastle

In the end, Newcastle did finally get a foothold in the match and were able to slow the game way down. It looked like Newcastle’s strategy in this match was to make this game as short as possible, by doing so there are less chances for superior talent to shine through and make the difference and that is pretty much exactly what happened with the allowance from the referee.

In this match Newcastle committed 16 fouls, doing really well to rotate those fouls around. With Bruno Guimaraes, Joe Willock, and Joelinton all committed 3 fouls, with Dan Burn and Callum Wilson each committing 2. All these really disrupted the flow of the match and made it hard for Arsenal to get things going. Against their very well-drilled defensive unit that really ups the level of difficulty.

The big added time numbers of the World Cup were a little jarring but it also made strategies like this pointless to try, I wouldn’t have minded if the board came up with a 12 rather than a 5 here. 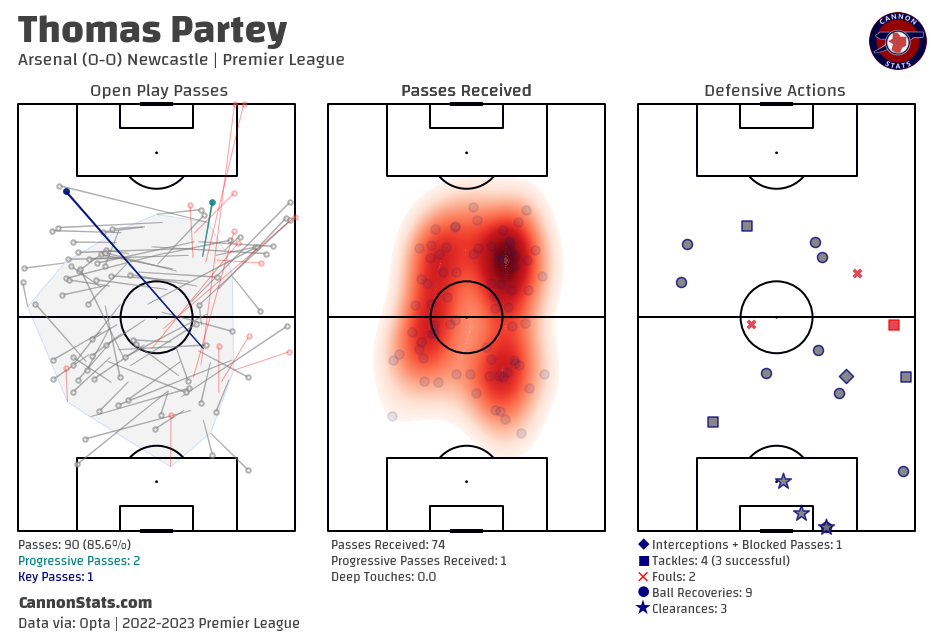 22% – The percentage of his passes that went forward

Partey has been one of the best midfielders in the Premier League but this match was not one of his best. Newcastle clogged the middle and left little space to find lanes to progress the ball through. On a day where getting the ball into dangerous locations was tough, one of the really hard tasks was that the team seemed a bit slow, especially when looking to switch the ball quickly from the left to the right.

Overall I think that there really isn’t a problem with this match, sometimes these kinds of things happen. If Arsenal can score a goal in their opening minutes of dominace I think they go on to win, if they get the penalty for the shirt pull (something that was called a foul multiple times elsewhere) Arsenal probably win, if the Eddie Nketiah chance late goes in Arsenal probably win, if Joelington scores his header Newcastle could also have held on. Overall this is a match that on balance I think Arsenal win 40-50% of the time, with a draw about 30% of the time and a loss 20-30% of the time. It wasn’t ideal but this is not a bad result in the grand scheme of things and we move on to the next big one.

Sources: Stats via Opta, from FBRef, Whoscored, StatsZone, and my own database

Was the nketia chance not a big chance ?

They never showed a replay because on the joelinton miss. I wonder given the angle and his position would we have found him to be offside? Not that it matters really in the big scheme of things but that would seriously lower their xG

They showed a replay in Sky and he looked onside.

He was definitely onside but the chance was much harder than the XG shows.

Got it. I think xG just sees the spot it hits his head like it was a “free header” vs the lunge it was to even get to the ball.

A Different George
Reply to  beldar77

And, as I think Scott has said, XG is always lower for a header than a for a kick in the same circumstances (distance from goal, number of opponents between the shooter and the goal, etc.).

Are you able to show statistically cuntiness of Newcastle?

I get it that they came to get a point but they point where rotational fouling, “slowing” of the game is deemed not sportsman’s like. I actually could care less about the referee they have shown themselves to be spineless but FA needs to deal with blantant (as if there is any other kind) time wasting.

53 minutes of actually football is cheating. Pure and simple. I now wish that catapulted and finish 9th.

When your players who are off the pitch are getting yellow cards – for the second time this season(!) – you are cunts. Plain and simple. Newcastle can do it but they shouldn’t get away with it. Much more injury time and the penalty awards would have been good.

Can’t wait until we get a penalty awarded against us now for the same things deemed “not penalties” today.

The youngest team in the league. COYG

You may be waiting a while

When your assistant coaches and substitutes are trying to waste time you know it’s instructed… that the ref group didn’t or wouldn’t take notice is telling here.

“The other thing that happened was that Newcastle was very effective at timewasting. In this match the ball was in play for just 53 minutes, for a typical Premier League match the ball is in play for on average 61 minutes. Newcastle was able to make this match 13% shorter than typical.” – This is exactly why I was fully on board with the Fifa edict about stopping the clock when the ball went out during the WC, and think it should be embraced by the PL. Takes away the ridiculous subjectivity in time wasting.

I’m all for +20mins added time

Is there any good reason for having the length of play being however long one guy thinks is enough? I understand tradition and that’s the way it’s always been, but the only real value I can see to “the true clock is kept on the wrist and between the ears of the ref” is to build in Fergie Time controversy. Ball in play, clock moves. Ball not in play, clock stops. There is 14 mins 21 seconds left in the 2nd half….Not 90 plus some round number of minutes and then maybe some more because…..

A Different George
Reply to  Jim

The way it was done in the World Cup shows you don’t have to change any of the tradition or to actually stop the clock. You just need someone–the assistant VAR, for example–who keeps tabs on time-wasting. You don’t add time for a “normal” throw, even if some take longer than others. But a trained referee ought to know the difference between a goal kick that is delayed because the keeper is waiting for his team to get up the field and one where the keeper is delaying.

Jim
Reply to  A Different George

And I appreciate that. Having grown up in a sports culture where 0:01 means the game will end in 1 second and 0:00 means it’s over, I am constantly baffled by having 0:00 mean the game may or may not end “soon” depending upon the whim of one man who isn’t accountable to anyone.

7 mins of extra time means at some point after the clock shows 97 the whistle will blow — but probably not if one of the teams is moving the ball towards the final 3rd, but maybe it will, let’s see!

It has been a while since we feel disappointed when arsenal draw a match. Different from last season where some of us didn’t feel disappointed even when we lost. The hope and expectation have significantly elevated this time. Coyg.

Surprised their xG was as high as one but I guess that Joelinton chance while difficult was a big one! Game was of fine margins and as you said either team scoring nicks it. A sign of how improved Newcastle have become, scary to think how they’ll be after a few more windows to improve their squad

Agree with your comment at the end. We did fine against a very good and extremely cunty side. They are Stoke but with a lot more quality. We could have won this, there was a chance of losing (albeit nothing after the 50th minute or so). I thought Partey was fine without being decisive but Zinchenko was brilliant and the one most often able to pass through their midfield.