THE LOWDOWN
Arsenal kickstart the second half of the season with a huge game against Chelsea at Emirates Stadium in the WSL on Sunday, with over 45,000 fans expected in the stadium. The Gunners trail Chelsea by three points at the summit of the table but the visitors have played a game more. A victory would put them in the box seat in the title race, albeit slightly less than half way through the season.

With significant injuries to Beth Mead and Vivianne Miedema and the departure of Jordan Nobbs and upcoming departure of Mana Iwabuchi, Arsenal have been very busy in the transfer market. Attacking midfielder Victoria Pelova has arrived from Ajax, creative midfielder Kathrine Kuhl from FC Nordsjælland and Canadian goalkeeper Sabrina D’Angelo.

New: Arsenal Women: Three things to look for in the second half of the season https://t.co/s0U9s7BlFE #arsenal #afc pic.twitter.com/9ZaNLqsGeF

They have also recalled Gio from her loan spell at Everton, with Cloe Lacasse likely to join Benfica. It’s a very new look Arsenal side but that is by necessity, they could not not address the loss of their two most prolific scorers and creators. I am not expecting any of the new signings to start on Sunday but with them and the fit again Lina Hurtig in the squad, Arsenal should at least be able to make some substitutions when appropriate.

This game historically has an outsized impact on the title race, though Jonas Eidevall was keen to point out that Arsenal took four points from Chelsea last season and didn’t win the league. With Chelsea away, Manchester United away and two games against Manchester City to come in the second half of the season, how Arsenal perform in these matches will be season defining.

TEAM NEWS
Vivianne Miedema will miss the remainder of the season with a ruptured ACL, as will Beth Mead. Sabrina D’Angelo, Kathrine Kuhl, Gio and Victoria Pelova all go into the squad for Sunday’s game. Jordan Nobbs has left the club for Aston Villa. It remains to be seen whether Mana Iwabuchi will be in the squad with a move expected for her in January.

A WORD FROM THE BOSS
“It’s the next game so it’s the most important one. We have played some thrilling games against Chelsea before and we like to play these kinds of games. We have the privilege to play it at the Emirates in front of our fans with the number of tickets sold it’s going to be a great occasion. We will have a January that will see a lot of change for us.

“When things are changing you need to develop and that means investing time, energy and knowledge into the team and you cannot take things for granted. We are trying to make the best use of the time available and I am proud of everyone’s effort. We could go to the Emirates and play some training minutes against Tottenham last week and it was really important.

“We have new staff and new players who have never been to the Emirates before. That we could bring them there for that will make us better prepared for the weekend. We see all these small things at the club and these small things build togetherness. It is about enjoying that and working out how we play with the crowd and how do we use the crowd to energise the game state and make it as difficult as possible for the opposing team?”

LAST TIME OUT
When the teams last met at Meadow Park in the FA Cup semi-final in April, Chelsea ran out 2-0 winners with goals from Ji So Yun and Guro Reiten. In this fixture last season, Arsenal were 3-2 winners at Emirates Stadium with goals from Vivianne Miedema and a Beth Mead brace.

THE OPPOSITION
Chelsea have won the title in each of the last three seasons since Arsenal last won it in 2019. They defeated Arsenal in the 2022 FA Cup semi-final, 2021 FA Cup Final and 2019 Conti Cup Final. They continue to be the club’s biggest barrier to silverware. However, since Jonas Eidevall arrived last season, the games have been closer affairs.

The Blues had a lot of stability last season which undoubtedly helped them in last season’s title race, which they won by a single point. Since then, they have missed Melanie Leupolz who has been on maternity leave and Ji So Yun, who returned to Korea over the summer. Along with the signing of Kadesha Buchanan at centre-half, it means there has been a bit of a transition in central areas.

After surprisingly losing the opening game of the season away at Liverpool, they have won every game in the WSL, seeing off Manchester City and United in the process. They do not look quite as solid, tactically, as they have done in recent seasons. However, the talent they have, especially in forward areas, is utterly formidable. Defeating Chelsea would not only give Arsenal a small advantage in the title race, it would represent a big psychological boon.

A whole host of talking points ahead of Arsenal away! 💬 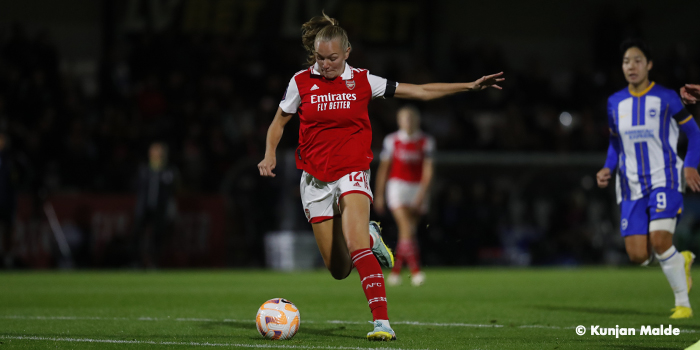 With two of Sophie Ingle, Erin Cuthbert and Jess Fleming in central midfield, Chelsea do not tend to build through the thirds. The central midfield has become a destructive force for them. Their preferred avenue of distribution is either Millie Bright’s long passing or Kadeisha Buchanan’s ability to dribble the ball out of defence.

Stymying those avenues of building play will be crucial for Arsenal and Frida Maanum will have a crucial role in trying to disrupt Chelsea’s build-up. Maanum tends to play in the left half-space and could be asked to mark Millie Bright in possession. The Gunners also need their Norwegian midfielder to be sharp on the ball in the final third.

The simple fact is, Arsenal lost a whole lot of end-product when they lost Beth Mead and Vivianne Miedema so the likes of Maanum, Foord, McCabe and Blackstenius will be under more pressure to score. Maanum scored a hat-trick in her last game against FC Zurich. Chelsea is a different calibre of opposition altogether but Frida has shown herself to be a great asset in winning the ball high up the pitch and then making things happen. 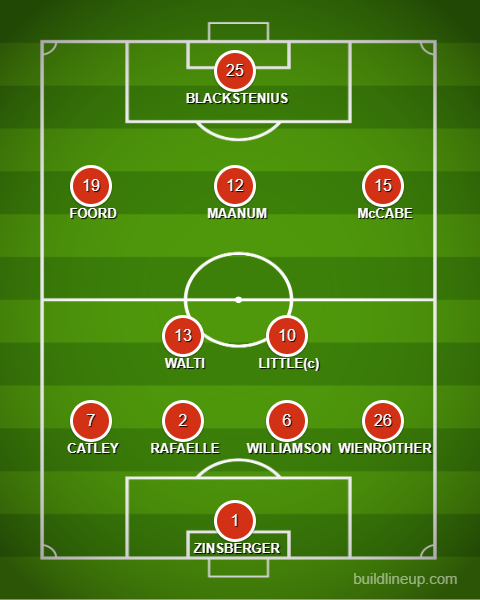 HOW TO CATCH THE GAME
The match takes place at Emirates Stadium on Sunday at 12noon and will be shown live on Sky Sports Football in the UK.

COMING UP
We will have match reaction from Jonas Eidevall on the site on Sunday afternoon, as well as the usual analysis piece on site on Monday.

I’m positively terrified of this fixture at this point in time.

I feel the opposite: confident of a result with the team & squad we have.

It’s not the ideal time but on the other hand we are at home and have the surprise factor.

Definitely wouldn’t mind a draw. We need more time for new signings to settle in

Come on AWFC! Stina, Lina, Frieda and Caitlin, this is your time to shine.
I really hope a least one of Pelova, Kuhl or Gio gets some game time.