Arsenal Women: Three things to look for in the second half of the season

A huge second half of the season awaits for Arsenal Women following the winter break, beginning with a massive game against Chelsea at Emirates Stadium on 15th January. Tim Stillman looks at some of the themes that will define the second half of Arsenal’s season.

How will they replace the end-product of Vivianne Miedema and Beth Mead? 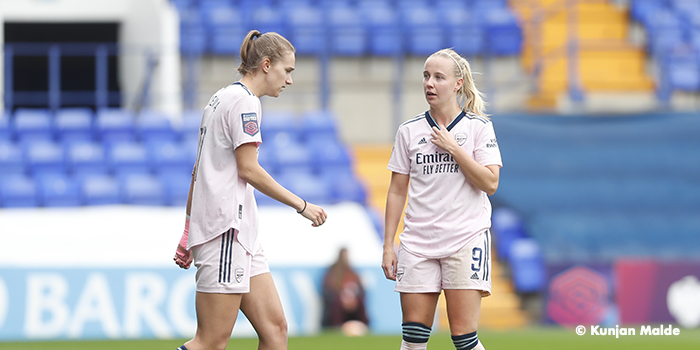 Mead and Miedema have been permanent members of the starting eleven for the last five seasons now and they are Arsenal’s most productive players in the final third by some distance. Mead and Miedema have been first and second top goal scorers and assisters for the last three seasons. To lose both in the space of three weeks to ruptured anterior cruciate ligaments feels especially cruel.

However, Arsenal cannot afford to feel sorry for themselves and they have hardly shown parsimony in the market in trying to amend for this twin loss. In the last game before the break, Jonas Eidevall told Arseblog News, “One of the challenges of this transfer window that we need to recruit players that can give us end product because that is certainly one of the measurable factors that we have lost with those two players.”

Arsenal have responded with the purchases of attacking midfielders Victoria Pelova and Kathrine Kuhl and by recalling Brazilian winger Gio Queiroz from her loan spell at Everton. It bolsters Arsenal’s creative prowess but none of those players are prolific in front of goal just yet. However, Arseblog News understands a striker will is likely to come in in January and are strongly linked with a deal for Canadian striker Cloe Lacasse- who scored five goals for Benfica in the UWCL group stage- could help there. 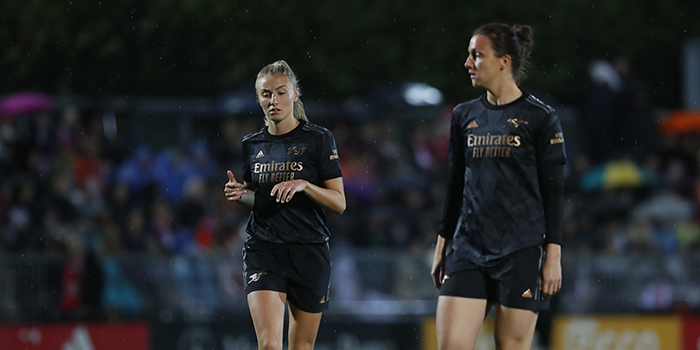 In the space of a few months between December 2021 and April 2022, Arsenal signed Rafaelle Souza and persuaded Leah Williamson and Lotte Wubben-Moy to commit to new contracts. Jonas Eidevall was making it very clear how he sees the bedrock of his defence in the coming seasons. Rafaelle and Leah Williamson captained their respective countries to continental glory in July while Lotte Wubben-Moy was also a member of England’s Euro 2022 winning squad.

Williamson and Rafaelle began this season together, just as they had in the wake of Rafaelle’s signing last January. However, the Brazilian has been plagued by injury since arriving, which has opened the door for Wubben-Moy. Lotte has been a mainstay of a defence which broke WSL clean sheet records.

When Rafaelle and Williamson returned to the team before Christmas, Wubben-Moy retained her place, allowing for Eidevall to ease the two senior defenders into action gradually. However, for the final game and a half before the break, Eidevall pushed Williamson into midfield and partnered Wubben-Moy with Rafaelle.

Arseblog News asked Jonas Eidevall whether this was a tactical ploy, an idea which he all but refuted, “It was about me selecting the best starting eleven in my eyes.” With Kim Little back to full fitness, that midfield slot is no longer spare and three into two won’t go. Until she was subbed 61 minutes into the 9-1 win over Zurich just before the break, Wubben-Moy had played every single minute available since being subbed into the Champions League qualifier against Ajax in September. Eidevall has the option to rotate, of course, but one very reliable defensive performer is likely to miss out. 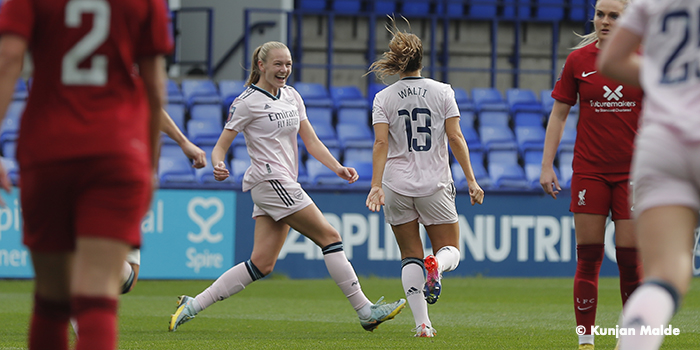 For all of the critical injuries Arsenal incurred in the first half of the season, there is one potential player absence that keeps Gunners fans awake at night. Lia Wälti. The Swiss missed four games in 2022- the away defeat to Birmingham that cost the team the WSL title, the Champions League quarter-final second leg defeat in Wolfsburg and the Conti Cup quarter-final defeat against Manchester United in January.

She was an unused substitute for the home Champions League game against part-time FC Zurich and she was rested for the home FA Cup tie against Championship side London City Lionesses. In short, she is very important but, not only that, there isn’t a totally natural replacement for her in the squad.

Arseblog News asked Jonas Eidevall about his contingency plans for the position back in September, “Leah (Williamson) can also play there and has played there for England, Kim Little can definitely play there. If Frida Maanum improves her defence and that’s just some small adjustments she needs to make in her positioning and decision making there, I think she has all the other tools to be able to do it as well.

“It’s the same options that we had from last season so we have continuity there and I am comfortable with that. We have different types of players who can play there which gives us different tools depending on which opponent we are playing.” Maanum is now needed in the advanced position but has not dropped into the six since the defeat at Birmingham.

The loss of Miedema also makes the prospect of dropping Kim Little back a little less attractive. Given the aforementioned depth at centre-half it would probably be Leah Williamson filling in for Wälti if required but she plays the role in a very different way and it would require an adjustment. All of this remains subject to speculation because, as much as Jonas talked up having ‘different tools’ in the squad, we haven’t really seen them and that illustrates Wälti’s importance. Let’s hope Wally stays fit so that we are kept guessing on the solution.

Do you see Anna Patten returning?

No, Arsenal are very well covered in defence.

I would agree except both Williamson and Souza missed a number of games this season and last with injuries. With the injury record those 2 have I wouldn’t have minded a better center back option than shoehorning Catley into center back. Agree that competition for Walti is the priority though so I dream of an Oberdorf or Williamson type young player that has played both center back and defensive midfield.

Wally has to be the most under-rated player in the league! She doesn’t win awards or get mentions on the highlight shows but we are a very different team when she is not available.
If only she had a twin sister that wanted to be a Gunner! 🙂

Couldn’t agree more. Do you remember when, in the Euros, she had to come off about 5 pr 10 minutes before the end of the game and within virtually seconds, Switzerland fell apart?

Yes, it does keep me awake. Please, Jonas, help me sleep.

I remember we beat Lyon off the Park with Kim & Walti playing as double pivots, with Kim out it was hard to do so, but her return makes Walti Safer as she will be subbed off more often to give her rest.
Our real problem is that if Stina gets injured then we are in a hot pickle. As she is the only pure striker in the Squad even when everyone is fully fit.

It may be true that Stina is the only recognised striker but Frida, Caitlin and Katie seem to bag as many goals and ultimately it doesn’t matter who or how you score as long as you put plenty in the net!
There is no rule that says you have to play a No.9!

but with a pure number9 you have the rivals defense under constant stress, you can see the lasts games, Stina is running to the right wing in the empty spot leaved for Mcabe, dragging the defense to the sides making a hole for Mannun or Caitlin.

Without Stina’s runs antagonizing the defenses, we are not scoring those man goals. She contributes way more than goals but tacticos are easily bamboozled by basic stats like G/A.

Foord played 9 when Stina was subbed off this season a few times. Hurtig played in Foord’s usual position.
Walti is definitely the player for whom we have no good solutions should she be unavailable.

There will be a 9 coming in in January.

“How will they replace the end-product of Vivianne Miedema and Beth Mead?”
This will most likely determine if we get a trophy or not this season (and maybe even next season depending on the length and quality of their recoveries).