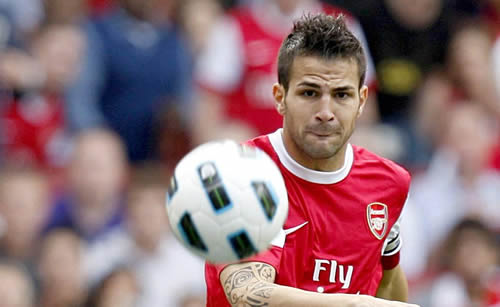 In news that will shock nobody, Radio Catalunya have announced that Barcelona have reached a ‘preliminary agreement’ with Cesc Fabregas over his transfer to the club this summer.

According to Sport (Spanish – Google translation), they said in their sports talk show ‘El club de la mitjanit‘ that Cesc’s agent will travel to Barcelona on Friday to discuss the strategy to enable the move to happen.

The two keys to this are:

2 – Cesc should cost less than what Barcelona offered last year because he’s spent another year at Arsenal and his value has ‘amortised’ accordingly.

This ignores the possibility that:

2 – Barcelona’s attempts to pay less for the Arsenal captain do not have to be taken seriously by the club.

In a market which sees Sunderland’s Jordan Henderson rated at £20m, the Catalan club will need to make an offer significantly greater than the €30m they came to the table with last summer and at which their bidding is supposedly starting.

It might well be a spurious comparison but it is unthinkable that a player of Cesc’s quality could leave Arsenal for less than what Liverpool paid Newcastle for Andy Carroll.

There is a strong belief that for the right price Arsenal would be prepared to let Fabregas go but only if the price is right. Barcelona have a long way to go before they reach that figure and if they think they can get him on the cheap they will have to think again.

They need to test Arsenal’s resolve, at the moment they’re not even coming close.

Hahahahahaha there is logic and then there is Barca logic,the one used by most people is not taken out of some Monty Python sketch the other one is.Hahahaha less,hahahahah less hahahah catalan cunts.

I would so love it if we sold him to Real for £55M. That really would send a message to Barca not to fuck with us, and show our other players not to start openly declaring their love for other clubs especially ones so openly disrespectful. Real would also love it as it would be one in the eye for Barca.

I agree with argonaut. We could never ‘sell’ him to Real because Cesc I assume would not want to go there as it would kill any chance of a move to Barca. I think we should accept a fee from Real though if it is financially viable. It would then put the onus on Cesc and Barca. Some fans might read these comments with dismay but as I have said elsewhere the resolution of this topic is required before any other serious transfer dealings can take place.

Is Barca crazy? If they think at this price we will sell our star player, they might as well be. If they are willing to put in the midfielder, I am still not happy,. What I want is Bojan Krkic. Our team need a striker of his calibre. We have Chamakh and most probably Vela will also gain importance next year. But Krkic will be the key and may be able to be the substitue in case

Only for the right price

I really don’t think you can use Henderson as any kind of benchmark when his contract situation is totally different.

Players’ values are not solely based on ability, they are due to a number of factors, one of the most important of which is how long they have on their current contract.

Cesc’s value would have amortised since last season as well as fact that being a year closer to leaving on a free, our conviction to keep him would have waned too.

I reckon he’ll leave this summer for approx £28m. No more than that.

Bracelona truely are a bunch of cunts. I hope they contract polio.

@Gunner at Delhi Barça are willing to let Bojan go, because they think he needs to play somewhere. But they also want (and the player too) to put a rebuy clause in any deal. Bojan would want to return to Barça as soon as possible. And, as I live in Catalonia and I have watched him play all his matches, I can tell you he would struggle badly in the Premier League, as well as in Serie A. He doesn’t have much pace despite having quick feet and he isn’t stronger at all. He can’t play on the wing either,… Read more »

Anyone thinking that we could sell Fabregas to Real is living in a dream world. There is absolutely no chance of Cesc accepting the move as he is a Catalan and would only ever play for Barca’ in Spain.

I would love it too if he went somewhere else other than Barca’ but I know that he wont go anywhere else.

If the player won’t sign there is no sale.

The thing is that if Arsenal accept a big of say 50 million, then Barça are forced to bid the same. Otherwise it would be clear that they only want Cesc to rebel against Arsenal.

Guys, it’s NOT at all about selling Cesc to Real. Accepting a 50+ mill bid from Real would only make a public record of his valuation. Something then that Barca (and cesc) would be hard pressed to argue with.

In the end the best deal would be that Cesc stays, wins the premier league and signs a new deal!!!