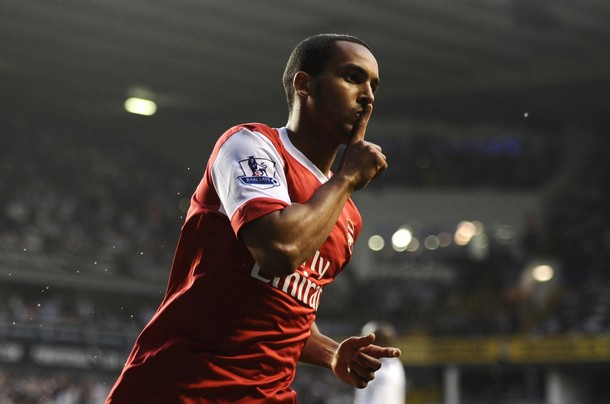 Theo Walcott is still desperate to prove himself as an out-and-out striker despite spending another season predominantly operating on the right side of Arsenal’s attack.

The speedy wide man has had his most prolific season to date with the Gunners, scoring 13 goals in 25 starts, despite  injuries taking their usual toll on his seemingly fragile frame.

Eager to fulfil the role which Arsene Wenger earmarked for him when he moved to North London from Southampton, the England international told The Sun:

“I want to play up front a bit more. I was signed as a striker and I haven’t forgotten how to play there,” he insisted.

“It’s difficult to get involved when you’re out on the wing, especially if you make a slow start and don’t get an early touch.

“But hopefully the boss has seen a bit more of my game coming out with goals and assists.

“With me being quick I can attract opponents and create more space for others.

“I’m not saying I’m going to win everything for Arsenal playing as a striker but I think I’ve developed and want to play up front.”

While Robin van Persie will no doubt start next term as the first choice candidate to play up front, the potential Emirates exit of Nicklas Bendtner, the alarming downturn in form of Marouane Chamakh and the lackadaisical prowess of Carlos Vela, could see Walcott given more opportunities to strut his stuff in and around the penalty box.

Nevertheless, even if Arsene Wenger does push the 22-year-old into a more central role it is unlikely to dampen the calls of the Arsenal faithful who are eager to see more firepower added to the squad. Linked with several big names Walcott himself revealed that the excitement of a summer speculation had filtered down to the squad:

“The manager has said he is going to spend this summer and I’m intrigued to see who we’re going to get.

“We’ve got a small squad and it would be nice to see a few additions. I’ve heard rumours of Real Madrid’s Karim Benzema and signing a player of that calibre would get the crowd on their feet and help us hold on to our best players.

“Of course I can understand why some of our players might be getting frustrated and thinking about leaving. They want to win things and we haven’t done that for six years.”

I too think Theo would be far more effective deployed centrally however, he surely cannot expect to be played there ahead of the imperious RvP…..unless RvP is injured….at which point Theo will probably also be spending yet another spell on the sidelines/treatment table :-0
Awesome site btw – great stuff and very insightful with behind the scenes issues!

I’ve always liked the idea of rvp out wide possibly on the left.

It’s nice to see Walcott calling for more signings but if he wants signing of the calibre of benzema then surely these players would start in front of him?

I’d like to see him up top. It’ll paly to his strengths. I do see, however, why Wenge rput him out wide. His off the ball movement has improved dramatically. His goal against Spurs was perfect example, alovely flat run across the back four to keep him on side before spinning goalwards. Ljungberg-esque

I think it would b great for walcott to play up front, meaning RvP could move out to the wing with his skills, or even play as a second striker in a 4-4-2 formation. Btw this is an awesome site!

thing is, we need to change the formation. 2 up front. mmmn. because its certainly not going to be theo on his own relegating RVP to the wing.

How about RVP-Theo up top? They sort of do the pivot thing now with theo out wide, if he comes more centrally he could do way more damage!

He is never going to start centrally in a 433 formation, and arsenal has had it’s best form in the last two seasons with RvP in that central attacking role. So, no, Theo, it’s not happening anytime soon.

He still needs to add to his game, too. But more importantly, he needs prevailing European tactics to change.

Arsene always said Theo was always going to play upfront – was just a matter of when… What worries me though in this article is the fact that he is talking about players getting frustrated and wanting to leave. Unfortunate.. On a positive note, I love the site!! articles are of the highest calibre – great work!!!

The last time arsenal won anything we played 4 4 2. In fact all of Wengers winning sides played 4 4 2! I don’t why we dedcided to go 433 just because other big teams went that way. We always played against teams with 5 in the middle and dealt with it. Theo needs to play up top with RVP. Don’t you all remember the last no 10 and no 14 partnership?? Ok we will have to change our midfield but Theo playing off the last defender and RVP feeding him every week sounds like a dangerous partnership to me.

I totally agree with you all who suggest a 4-4-2 with Theo and Prince RvP up top as Theo is indeed 110% an instinctive forward. Saying that, his wide play/all-round game has vastly improved by being utilised out wide in his formative years – much as King Henry was. However, that would require at least another two defensive midfield ‘squad’ players (I’m talking mid twenties, ‘experienced’ players please Monsieur Wenger!) in order to compliment the ever-growing Song…….but I truly see Le Boss signing only a left back (excluding Jenkinson today), a creative midfielder (once both Cesc and Sami have left??)… Read more »

I agree with Theo, I think he should be playing up front with RVP, because I dont think Hernandez is better than Theo at all, the only difference is the position Alex ferguson is playing him.
Some similarities between the two. (Pace ) Theo is faster, ( movement of the ball) Theo has made good progress this season ( goal scoring) again I think Theo will be better given the fact that he has been playing as a winger this season and managed to score some very important and superb goals.

Why Theo Walcott Should Get More Chances Through The Middle