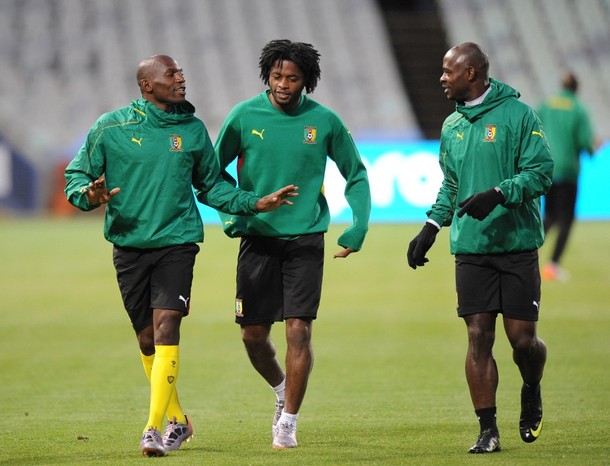 Alex Song has been fined US$2,000 for failing to shake the hand of international colleague Samuel Eto’o.

The midfielder has also been told he will have to train three times with young players as part of a strict punishment imposed by the Cameroon football federation following an incident ahead of the Indomitable Lions’ Africa Cup of Nations match with Senegal in June.

The confrontation between two of Cameroon’s most high profile players is the latest in a string of disagreements which have split Javier Clemente’s squad overshadowing their attempts to qualify for January’s showpiece tournament in Gabon and Equitorial Guinea. Cameron are currently third in their group, five points behind leaders Senegal and two behind DR Congo.

Despite a breakdown in the relationship between Eto’o and Song, the former was still spuriously linked with a move to Arsenal earlier in the summer with speculation mounting that the 30-year-old could leave Inter Milan.

Still one of Europe’s most predatory strikers in and around the box, the player is well known to Arsenal fans after he scored the equalising goal for Barcelona against Arsene Wenger’s side in the 2006 Champions League final.

While most at the Emirates see the Cameroon man as something of a thorn in the side, Eto’o did offer some light relief for Gunners fans in 2008 when he played down the prospect of a move to rivals neighbours Spurs:

“Tottenham, and I hope the English fans will forgive me, are a club in mid-table and I need more”

Song should tell them to fuck off. Seriously.

Who knows what the Cameroonian FA makes players sign by way of a code of conduct. Just pay the $2k and get on with it. Song probably makes that amount by time he gets his ankles taped at Monday’s practice. Just make a mental note to give him the glad hand in public and curse his name privately, if he must.

Training with the youngsters? Just a normal day’s training then!

[…] incident, which took place in a Yaounde hotel ahead of the Indomitable Lions’ African Cup of Nations […]