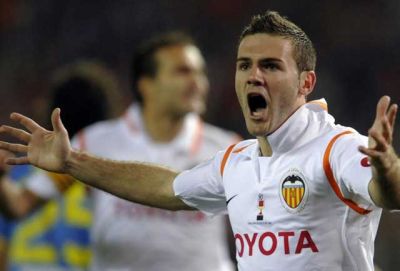 Both The Mail and The Sun run with the story, the former saying Arsenal have spoken to the players agent, the latter that the two clubs have had discussions about a possible transfer.

A club record fee of £18m has been mentioned for one of La Liga’s most exciting talents. Mata began his career at Real Madrid but never made an appearance for their first team before being sold to Valencia. He has firmly established himself as one of their most important players with 10 goals and 11 assists last season.

While Valencia won’t be keen to sell their financial situation is such that any bid will have be considered. The club has estimated debts of £400m, hamstrung in its efforts to move to a new stadium by the global economic crisis and hapless management, and Arsenal could well take advantage.

Mata is the latest in a series of attacking players to be linked with Arsenal this summer, including Gervinho, Ricardo Alvarez, Southampton youngster Alex Oxlade-Chamberlain and reports in the Portuguese press this morning say Arsenal have made enquiries about Porto’s pant-splitting forward, Hulk.

ummm but he has real dna!
that could be a problem in a few years when he is a bonafide superstar at the arsenal!

Lol Arsenal get Hulk? Porto is only accepting bids of 100 million for Hulk…Wenger will go in and value him at 10.6…

Wow. The realistic/cynical side of me can’t see it happening though.

Can’t wait for July 1st. But I don’t see Mata coming, only if Nasri decides to leave. Sounds more like an agent trying to drum up interest after a good tournament. Why do they always have to use Arsenal goddamnit.

Would be nice to see Nasri piss off somewhere abroad where people will get to see what a twat he is and what he is missing and make Mata the next Cesc.
Also keep Cesc for another season to blood the guy in for us.

You can only hope 🙁

What’s the bet mcfc and tottenham are linked to him within two days or even less. Bastards have no scouting network themselves and mooch off of Arsenal’s.

Nick B
Reply to  pram

Mata is a player that every single person knows about, not really a scouting find I feel

Nick B
Reply to  pram

P.S, i still agree Spuds and MC are cunts

Sniff
Reply to  Nick B

If you make hulk angry will he go green and become three times more muscular and then score loads of goals and then injure other players?

Arsenal have “begun talks”, a fee has “been mentioned”. if the Gervinhio thing is anything to go by wont be getting my hopes up just yet. mind you maybe the the Gervinhio thing has not gone anywhere because of potential of this. or maybe not. when talking about adding some steel to arsenal team bet nobody had thought about superhero strength. who needs joey barton when you can have the Hulk. speaking of Porto cast offs wasn’t the villas-boas character the one in charge when Arsenal took apart Porto in the CL. That nasri goal still a favorite, if you… Read more »

[…] was a key protagonist in the Spanish U-21 European Championship this summer and according to a report in the Daily Mail this morning is the subject of an £18m (€20.2m) offer from […]